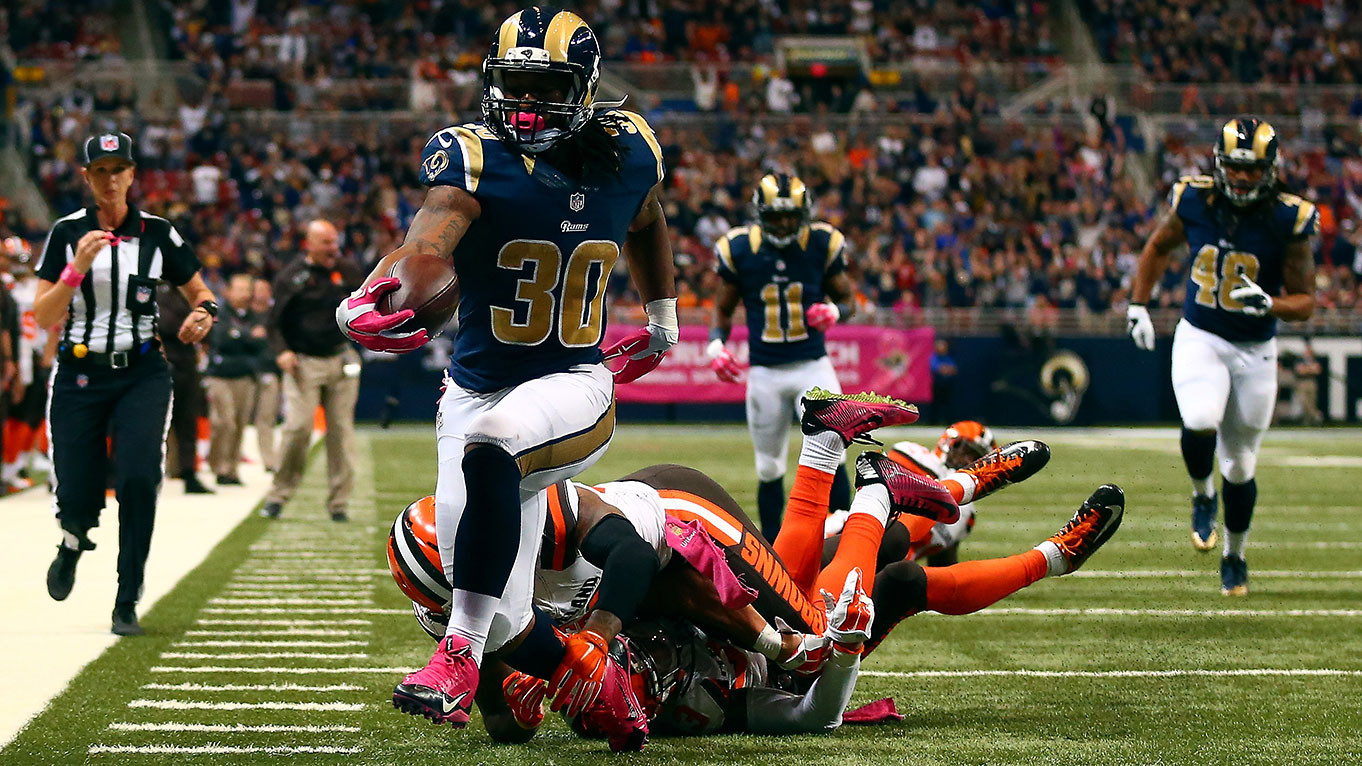 On yesterday’s Grantland NFL Podcast, Bill Barnwell asked me a question that at first seemed crazy. After we broke down Rams running back Todd Gurley’s latest stomping of an NFL defense, Barnwell wondered aloud if Gurley, three starts into his career, is already the best running back in football. It took me about two seconds to answer: Yeah, he is.

Since Week 4 against the Cardinals, when his workload increased, Gurley has averaged a bonkers 6.4 yards on his 68 carries. He is one of 39 players since 1960 to have three straight games with at least 125 yards on the ground, and, again, those were his first three games as a starter. Jeff Fisher came out earlier this week and told the Associated Press that as good as Gurley has been, “We just can’t rely on Todd all the time.” I mean, you can try.

Game flow is a factor (St. Louis was beat up by Washington in Week 2), but before Gurley was eased into the starting lineup following last November’s ACL tear, the Rams were rushing on 36 percent of their plays. Since Gurley arrived, it’s jumped to 50.6 percent. Only the Panthers are running more often. The results, despite Gurley’s healthy average, have been mixed. The Rams’ new-look offensive line is still very much a work in progress, and that progress has been stunted since starting guard Rodger Saffold went down against the Packers. That’s forced rookie Jamon Brown, who was already transitioning to guard after playing tackle in college, to switch sides as Garrett Reynolds has moved into the starting lineup.

When the Rams line up and try to push people around, there are still plenty of plays that end with Gurley getting hit behind the line of scrimmage. The entire line has its down moments, and the result can be a play like the one above against Cleveland. Since Week 4, the Dolphins are the only team averaging more yards per carry than the Rams, but Miami is also leading the league in yards before contact per rush. The holes are massive for Lamar Miller. Gurley isn’t getting as much help. The Rams are seventh — 3.4 yards before contact — in that time frame, and that’s even inflated by Gurley being an actual ghost.

No human is capable of making it through that hole. The beings that can make that run are Todd Gurley and Kurt Wagner — end of list.

There’s reason to believe that the line should get better as we get deeper into the season. The right side consists of two rookies, center Tim Barnes is a former undrafted free agent who’s started 10 career games, and Greg Robinson is still just in Year 2. While that progress happens, though, first-year offensive coordinator Frank Cignetti is doing what he can to build running lanes into the Rams’ blocking schemes.

St. Louis got a couple chunks of yardage off this action on Sunday. With Reynolds blocking down on the nose tackle, Barnes loops around in an effort to get to the linebacker. It’s an alternative to using a combo block to accomplish the same thing, and it also creates a manufactured seam that a monster like Gurley can exploit. By getting the linebackers moving laterally, Gurley is allowed to use his ridiculous vision. Watch as he threatens to run inside of Barnes, pulling linebacker Tank Carder in a step. When Gurley bounces the play back outside, Carder is already caught in the wash, and his chance to make the play is gone.

Cignetti also gets a little wonkier in creating space. Everything about this play works the way the Rams drew it up. By sending Tavon Austin in motion, Cignetti pulls Ha Ha Clinton-Dix out of the box. As the line steps right, inside linebacker Nate Palmer goes with them, and with Lance Kendricks coming back across the formation to kick out Julius Peppers, there’s a bigger seam than Gurley needs.

All of these built-in running lanes help, but occasionally, they’re not even necessary. Gurley’s strength and speed — be advised: Do not arm tackle — are on a different plane, but what’s making this possible is his ability to make these plays his own. This is the same play as the one before, with Austin going in motion and Kendricks kicking out, but instead of cutting back to the left, Gurley sees a sliver of grass to the front side and chews it up before the Packers can close.

As much fun as all of this is, Fisher is right. If the Rams are going to be a legitimate threat in the NFC, their offense has to be about more than Gurley and the running game. The occasional deep shot from Nick Foles is an element to reaching that offensive ceiling. With Gurley in the backfield, there should be some opportunities on the outside, just like the one Foles saw on a bomb to Kenny Britt against the Browns.

The best way Gurley can influence the passing game, though, is obviously with play-action. One of the drawbacks to the amount of running the Rams have done with Gurley is that they’re barely using play-fakes as a way to move the ball. St. Louis has run only 10 play-action passes in the past four weeks after running 23 of them in Weeks 1 through 3. The difference is in how effective they’ve been. Before Gurley’s first start, the Rams had a 60.8 QBR on play-action throws. In Year 1 A.G. (After Gurley), it’s 94.4.

There are smaller, more efficient ways that the play-action game can show up. This little dump-off to Kendricks is a product of Green Bay’s linebackers tearing after Gurley as the action moves to the left. Play-action throws don’t always have to be deep plays that take advantage of the middle of the field, but boy, it’s nice when they are.

This play takes long enough to develop that the linebackers crashing toward the line of scrimmage don’t seem to be what’s ailing the Cardinals defense, but the response to Gurley sets off a chain reaction that eventually leads to a huge gain for Austin. With the linebackers stepping up, Patrick Peterson feels obligated to follow the tight end coming across the field about three steps farther than he should. As Peterson is pointing and crying for help, Austin sneaks behind him, and Foles — who really does throw a nice-looking deep ball — puts it on the money.

I’d assume that Fisher would consider that play “not relying only” on Gurley, but in a way, it still is. When the Rams drafted Gurley 10th overall this spring, they envisioned him as the centerpiece of their offense, and we’ve already learned that he can be. Gurley’s workload — and the Rams’ rushing percentage — probably isn’t sustainable, but even if they choose to ease off the gas, Gurley can still be what drives the rest of the offense. The formula of Gurley, play-action throws, and the occasional deep shot is the best possible plan for an offense that has a limited passing game. If they can lean on their new superstar and start getting a bit closer to that offensive ceiling, this defense is good enough to make St. Louis a team that no one is going to want to see come January.