Sinking Suh, Rising Ware, and a Bargain in Buffalo: Looking Back at the Recent Successes and Disasters of NFL Free Agency 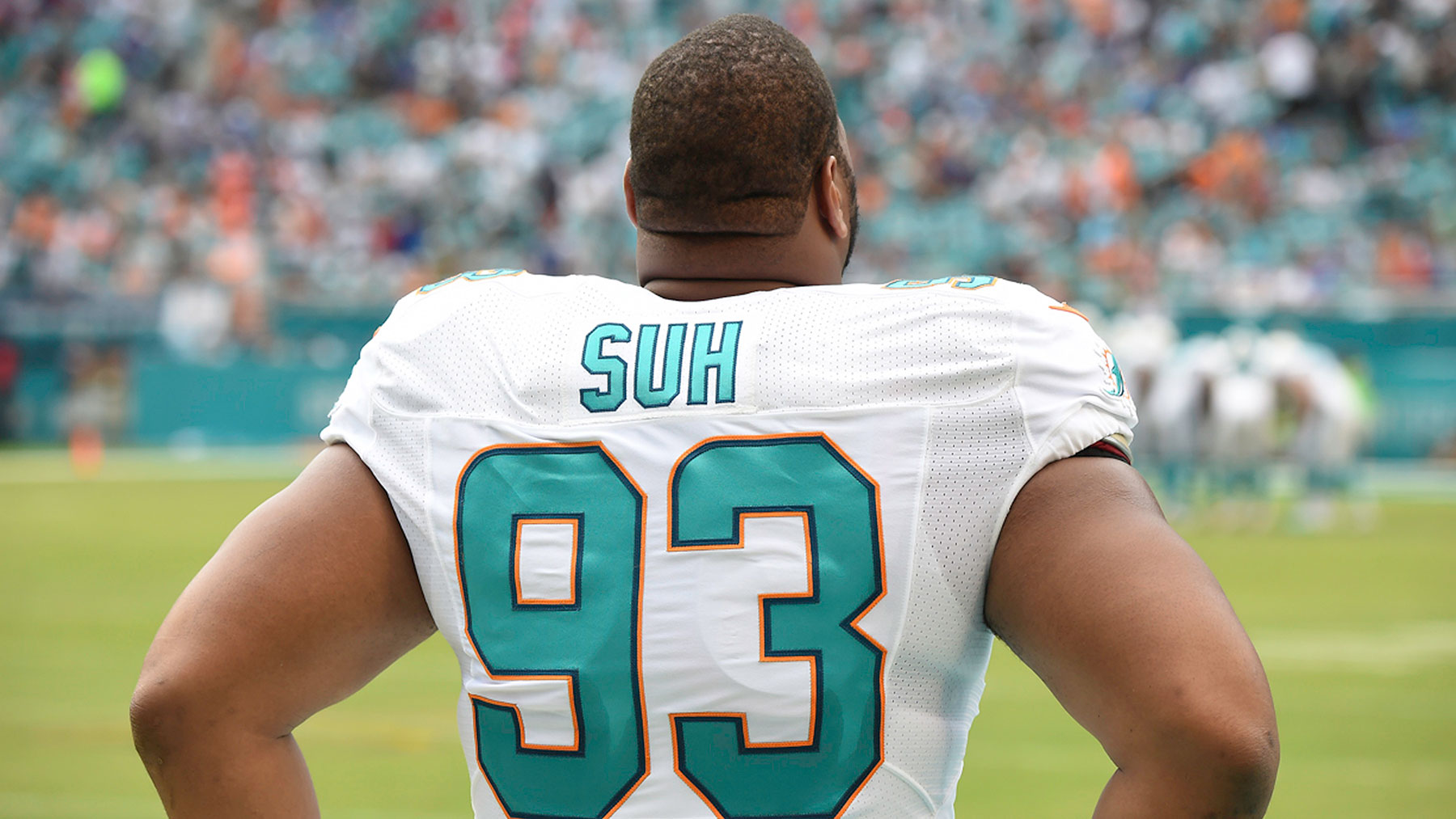 If the 1-3 Dolphins continue this current slide, there will be plenty of cautionary tales to be told about Miami, but the worst — and most expensive — may come in the form of Ndamukong Suh. Through four games, Suh remains without a sack, and his one quarterback hit has him on pace for 20 percent of his 2014 total. Suh didn’t suddenly fall off a cliff — there are both personnel and schematic reasons he hasn’t been his old self — but the well-known problems that come with handing a single non-quarterback $60 million guaranteed have been obvious.

Spending big money on Suh meant sticking with the status quo at linebacker and in weaker parts of the secondary. The same goes for the interior of the offensive line and at swing tackle, which could have used a slight upgrade. Suh’s production will eventually creep toward what we saw in Detroit, but the point, as it often is with free agency, is that the quick fix is rarely quick.

Come next spring, when writers and fans alike get worked up by players changing locales, Suh seems likely to be used as cold water to pour over all the excitement. Yet the free-agent pool, when scoured rationally, has been pretty useful over the past couple of offseasons. Free agency isn’t quite a fool’s game: It can be played well. But when it isn’t? Eesh. 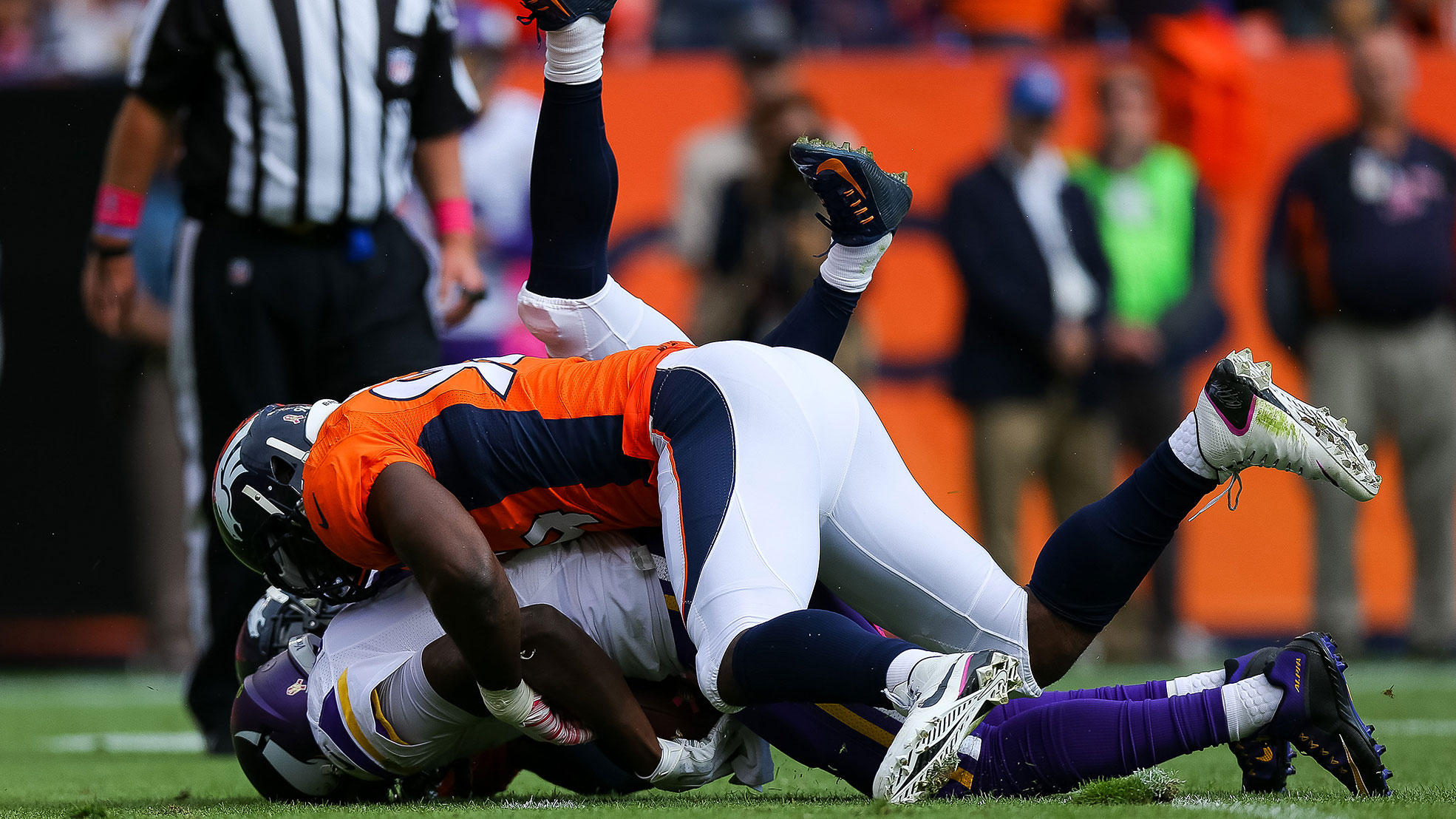 For the best-case scenario, look to Dove Valley, Colorado, where the undefeated Broncos are leaning on a 2014 free-agent class that might rival any we’ve ever seen.

When free agency kicked off in 2014, the Broncos had just lost to the Seahawks in the Super Bowl. But while their defense ranked a respectable 15th in DVOA, the group offered a few areas for improvement, as it featured a couple of aging former starters (Shaun Phillips and Champ Bailey) and the solid-but-unspectacular Duke Ihenacho at strong safety.

That spring, John Elway used that golden arm of his to throw a combined $59.5 million guaranteed at DeMarcus Ware, Aqib Talib, and T.J. Ward to take over those three spots. It might’ve taken a year longer than expected, but four weeks into this season, Denver comfortably ranks first in defensive DVOA, with all three playing meaningful roles. Ware, especially, once again looks like the player he did in Dallas — the one who was arguably the best defensive player in football at the end of the last decade. After finishing last season with 20 quarterback hits, he already has 12 through four weeks.

Of course, the Broncos’ success is about a lot more than three players. Replacing Jack Del Rio with Wade Freaking Phillips — one of the best defensive minds in football, who, you know, just happened to be hanging out at home — is quite the break. Watching Brandon Marshall go from Jaguars castoff to Pro Bowl–caliber linebacker doesn’t hurt. And Von Miller remains one of the best players at any position in the league.

Beyond Miller, the Denver defense is full of even more homegrown talent. Former fifth-round pick Malik Jackson is an underrated pass-rusher, nose tackle Sylvester Williams has come into his own, and cornerback Chris Harris Jr. continues to be one of the best undrafted finds in recent memory. Drafting and developing is always going to be paramount in building and maintaining a contender, but the Broncos are a perfect example of how strengths built in the draft can be supplemented with money spent in free agency.

It doesn’t take a long trip down the defensive DVOA rankings to find another. The second-place Jets are just behind Denver, and so far, the way they’ve spent their free-agent money has worked as well as they could’ve hoped.

Last season, Rex Ryan’s unit finished 11th in run-defense DVOA but ended up a disappointing 24th against the pass. With Darrelle Revis, Buster Skrine, Marcus Gilchrist, and Antonio Cromartie now in town, those numbers have evened out. The Jets rank in the top five against both the run (third) and pass (fourth), and Todd Bowles has built his defense to get the most out of its personnel.

For a group without much edge pass-rushing talent, Bowles has cried havoc and let slip the [whatever farm animal] of war. He’s blitzing on a league-high 53.1 percent of opponent dropbacks, and that has helped produce the third-best pressure rate in football. With players like Revis on the back end, it’s a risk that Bowles can afford to take. And when the Jets have brought extra pressure, they’ve gotten big plays out of it. All six of their interceptions have come during blitzes, and no team is getting interceptions more often when bringing five or more rushers (7.1 percent of dropbacks).

As for the other side of the ball, the Jets’ offensive line sports the best sack rate in the league, thanks in no small part to 2014 and 2015 offseason additions from Seattle Breno Giacomini and James Carpenter. Elsewhere, the Cardinals have also revived their O-line through free agency: Even after Carson Palmer faced the Rams’ firing squad of a front four last week, Arizona ranks seventh in sack percentage through four weeks, and 2014 signee Jared Veldheer looks to be worth every dollar of his five-year, $35 million deal. And back in the blue side of New York, Giants guard Geoff Schwartz, who was hurt for most of last season, has helped solidify a line that looks vastly improved this year. 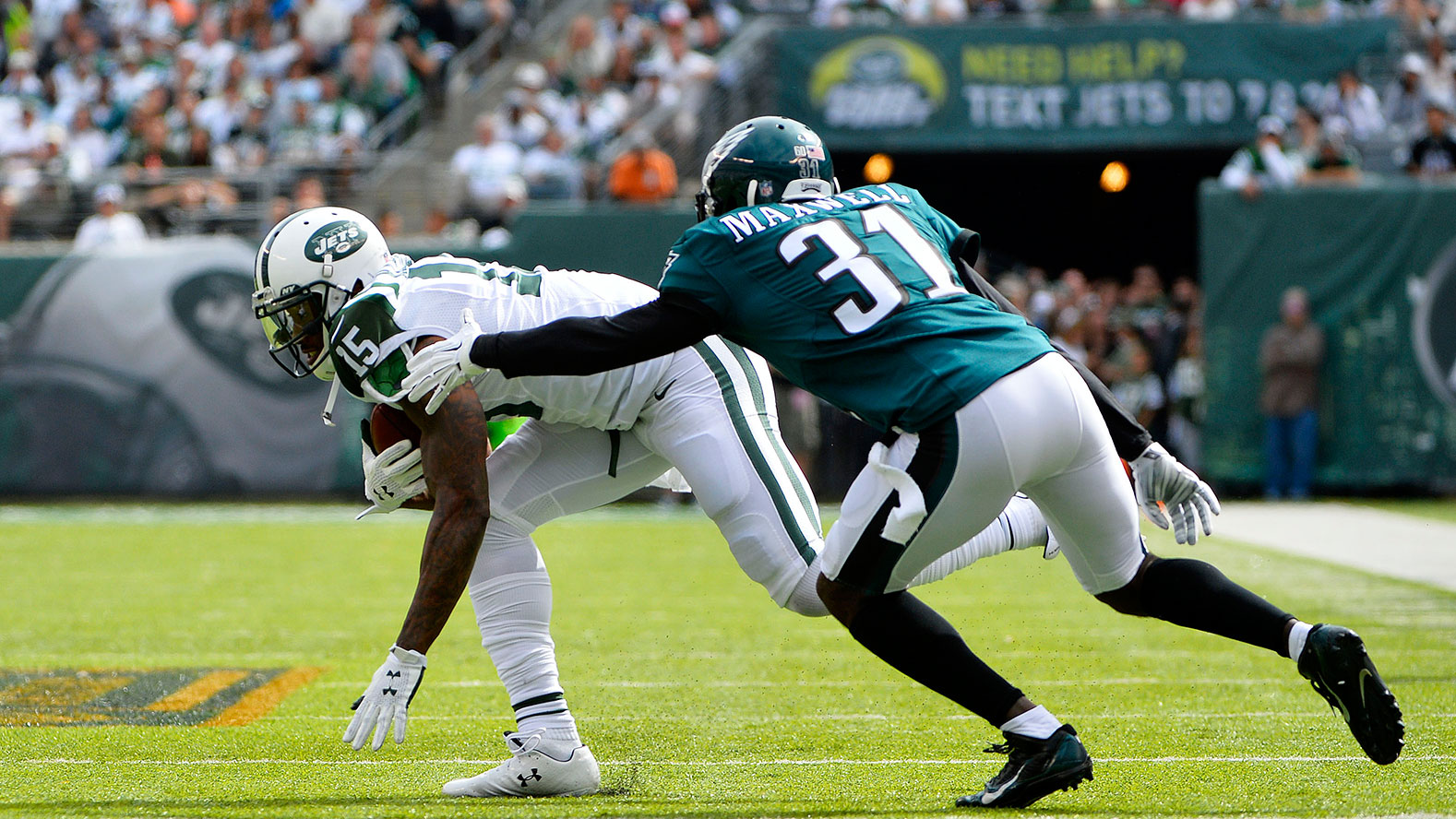 Like Schwartz, Jon Asamoah was considered one of the better guards available in free agency last year. He got a five-year deal with $6 million guaranteed, but this offseason he was supplanted at right guard by 32-year-old Chris Chester, who is playing on a one-year deal. The Falcons’ 2014 class shows just how much of a mixed bag free agency can be: Atlanta handed out deals to Asamoah, Tyson Jackson, and Paul Soliai, and while the latter two are still playing significant snaps, the Falcons are actually getting bigger contributions on defense from afterthoughts signed to one-year deals this spring. O’Brien Schofield and Adrian Clayborn are making a combined $4.7 million this season, and both have made meaningful contributions to a much-improved Atlanta defense.

Even worse in 2014 was Clayborn’s former team, the Tampa Bay Buccaneers. A year after letting Michael Bennett, whose initial deal with Seattle remains one of the best free-agent bargains ever, walk, the Bucs spent big … and it all went to hell. A year after signing Michael Johnson, Anthony Collins, and Alterraun Verner, Johnson and Collins have both been cut and Verner has ceded most of his snaps to Tim Jennings, who was cut by the Bears, who are 31st in defensive DVOA through four games.

This year, outside of Miami, the early front-runners for Tampa’s Worst Offseason title seem to be Chip Kelly and the Eagles. Philadelphia handed Byron Maxwell and DeMarco Murray a combined $46 million in guaranteed money, and so far, neither of those deals has panned out. As Bill Barnwell likes to often remind me on The Grantland NFL Podcast, the rub with free agency lies in opportunity cost. Even if the market dictates that Byron Maxwell is worth $63 million over six years because another team was willing to pay that much, the moves for him and Murray precluded the team from using that money elsewhere.

If all offseason signings and non-signings are connected by a chain of opportunity cost, then hindsight becomes expressed in a nagging series of what-ifs. The Colts’ free-agent record has been as shaky as any team’s for the past few seasons. What if, instead of signing Andre Johnson to $10 million in guarantees, the Colts had given Pernell McPhee the $15.5 million he got from the Bears? And what if the Bears never cut Julius Peppers, who’s piling up sacks for an improved Packers defense, and replaced him with Jared Allen, who now plays for the Panthers?

However, through four games, the weightiest what-if in the league is probably the one in Buffalo. This offseason, Tyrod Taylor was an overlooked member of a forgettable free-agent quarterback class. His three-year deal with the Bills came with $1.15 million in guarantees, putting him 46th among quarterbacks across the league. For context, backups Derek Anderson and Tarvaris Jackson each make more than him. What’s more important, though, is that the Texans gave Brian Hoyer a deal worth nearly three times as much as Taylor’s, and the one the Browns handed Josh McCown is worth more than four times as much. Coming off a rough outing against the Giants last week, it’s hardly the time to argue that Taylor is a star, but his play is giving the Bills a chance. And although Hoyer and McCown aren’t expensive by any means, the money that Buffalo saved on Taylor, comparatively, can be used to improve the rest of the roster.

As we’ve seen so far this year, the evils of free agency are real, yet there are also gains to be made. But when the size of the victory looks too good and too big to be true, just ask the Dolphins: It probably is.

ALDS Preview: Breaking Down Rangers vs. Blue Jays and Astros vs. Royals