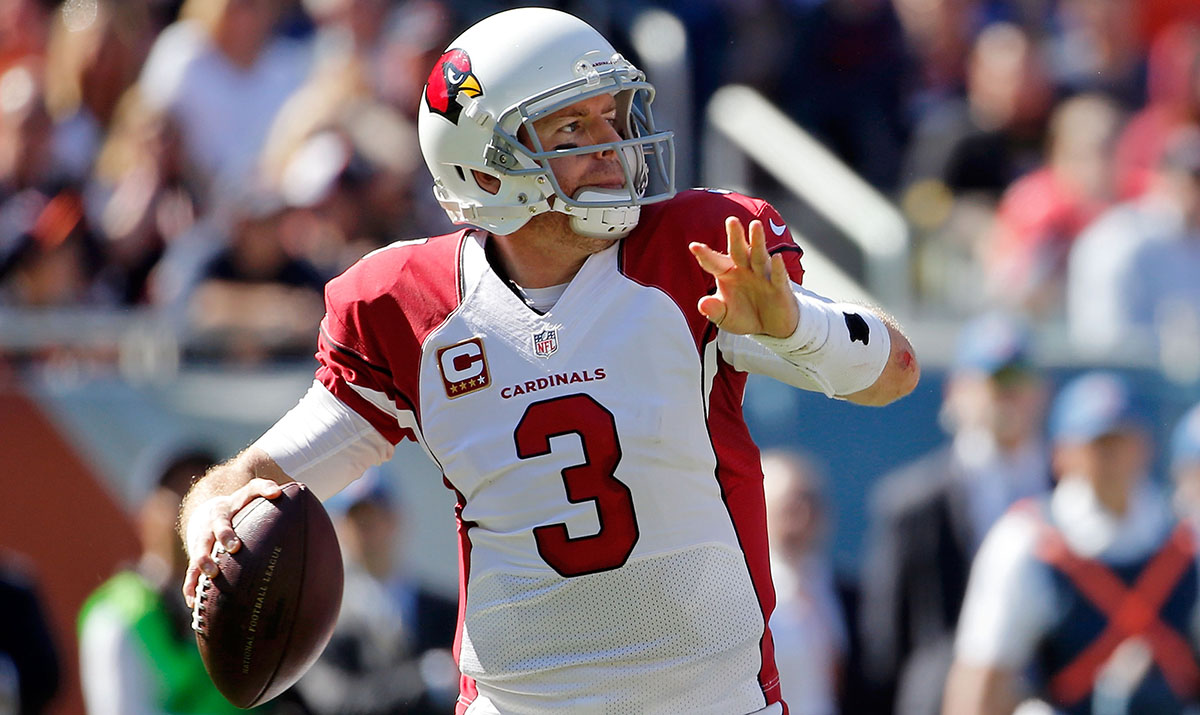 By telling his 2-0 Cardinals they “ain’t shit” earlier this week, Bruce Arians once again proved he’s the coolest coach in football. He also proved he’s capable of lying through his teeth.

Through two games, Arizona has the best point differential in the NFL and leads the league in DVOA. A walkover victory in Chicago helps those numbers, but it’s still fair to say the Cardinals have looked better than any other team in the NFC. This isn’t new territory for Arians and his team — Arizona won its first two games last year en route to a 9-1 start — but this year, the formula for that success has been tweaked ever so slightly. Previously, it was the strength of Todd Bowles and the defense that dragged the Cardinals to double-digit wins. But so far this year, it’s the offense that teams should fear.

Right now, only Ben Roethlisberger has a better QBR than Carson Palmer. And no team has thrown the ball more efficiently than Arizona. Two weeks is a minuscule sample size, but it’s enough to get a glimpse into the potential of the group Arians and general manager Steve Keim have assembled. It’s been a process — one that Palmer, Arians, and his staff will claim is still ongoing — but in Year 3 in Arians’s system, the Cardinals finally seem to be hitting their stride.

For most of his life, Larry Fitzgerald was a typical elite receiver. The Cardinals’ plan for much of his career was to split Fitzgerald out wide to the single-receiver side, creating as much space as they could for him to work against a single cornerback. “He’d been an outside receiver, an X to the single-receiver side not only in the NFL, but in college,” says Darryl Drake, Arizona’s wide receivers coach. “For 13, 14, 15 years, he’d played that one particular spot.” When Drake and Arians came to Arizona in 2013, they approached Fitzgerald with an idea. As Fitzgerald hit his 30th birthday, maybe the best fit for him in Arians’s vertical offense was in the slot. “As he was getting older, it gives him an opportunity to flourish inside,” Drake says. “He’s not getting beat up outside, and it gives him the ability to work off your nickelbacks and linebackers instead of going against a premier corner every play.”

That may not seem like a significant change, but like Drake says, Fitzgerald had spent almost his entire career playing one specific position in the offense. From his rookie season in 2004 through the end of 2012, no NFL receiver ran more routes than Fitzgerald’s 3,708. Of that total, only 698 came in the slot, approximately 18.8 percent of his total routes. Through 34 games with Arians, that number has jumped to 53.8 percent.

Fitzgerald may no longer have the explosiveness that made him the star of the 2008 playoffs, but the twitch in those muscles is still plenty fast to evade Jared Allen and Lamarr Houston in the open field. The profile of slot receivers is slowly changing throughout the league, but for the most part, the slot is still reserved for smaller, quicker threats. With Fitzgerald, defenses have to deal with a master route runner who also happens to have a massive 6-foot-3 frame and some of the strongest hands in NFL history. “That’s the uniqueness of Larry,” Drake says. “That’s the gift that he has, the ability to make those kind of catches with guys all over him.”

On the surface, a move to the slot explains Fitzgerald’s resurgence this year — 14 catches for 199 yards and three touchdowns in two games. But why did it require two seasons to take hold? “It’s a number of things,” Palmer said at his press conference yesterday. “Him being in a new position and both of us being in a new offense being asked to do a number of things we haven’t been asked to do. It’s a process. This is not a starter-kit offense when you can plug someone in and it’s easy. We started getting things going in Year 2, he and I, as far as our rhythm and comfort level with him knowing what he’s doing and me knowing what I’m doing.”

Last season, Fitzgerald had nine catches for 112 yards in the game Palmer tore his ACL against the Rams. But with a combination of Drew Stanton and Ryan Lindley at quarterback, the rest of the year was a slog for Fitzgerald. He failed to top 35 yards in any of Arizona’s final five games. The downgrade in talent from Palmer to Stanton is one part of the falloff, but Fitzgerald’s decreased role also had to do with a change in sophistication between a seasoned starter and a backup thrust into action. Arizona’s offense relies on more deep shots than any other in football. At 9.77 yards, the Cardinals led the league in air yards per attempt during their first two seasons under Arians. And while no one would call Palmer and his 8.84-yard average from 2014 conservative, that’s nothing compared to Stanton’s league-leading 10.9 that season. With Stanton, when all else failed, Arizona was willing to let it fly, which left Fitzgerald with a lot less to do.

For wideout John Brown, on the other hand, the vertical element of the Arians offense was an ideal fit — in his second year, he’s only become a more dangerous threat on the outside. “We’re always going to continue, no matter what the defense is doing, to push the ball down the field,” Cardinals quarterbacks coach Freddie Kitchens told me. “That’s the way they stay off you underneath. That’s a general principle that every offense should have. We always have a built-in shot on every play. If it’s there, we take it.”

Brown and his 4.34 40 speed are the target for most of those shots, and against the Bears, he was moving the Arizona offense down the field even without showing up in the box score. Brown gave the Cardinals 80 yards of offense with pass interference calls on Sunday, including a torching of Kyle Fuller down the right sideline. Speed, as Drake notes, has always been Brown’s best asset, but in Year 2, he’s making those wheels matter on the field. With a receiver as small as Brown, Drake says, bump-and-run coverage on the outside is going to come often. That’s when the game becomes more about the tiny battles at the line of scrimmage.

Some outside receivers — Julio Jones, Calvin Johnson, Brandon Marshall — can win those battles with physicality alone. But at 180 pounds, Brown has to rely on a knack for creating space. “The first time we worked him out,” Drake says, “I felt like he had it.” That workout was in Miami, at a park near Brown’s childhood home. The grass field they found had no lines, so Drake offered to put down some cones to help Brown spot his marks. “He said, ‘No, I know where 10 is.’ And then every route we ran, he got the depth. He got where he was supposed to. That’s just an understanding and an ability guys need to have.” 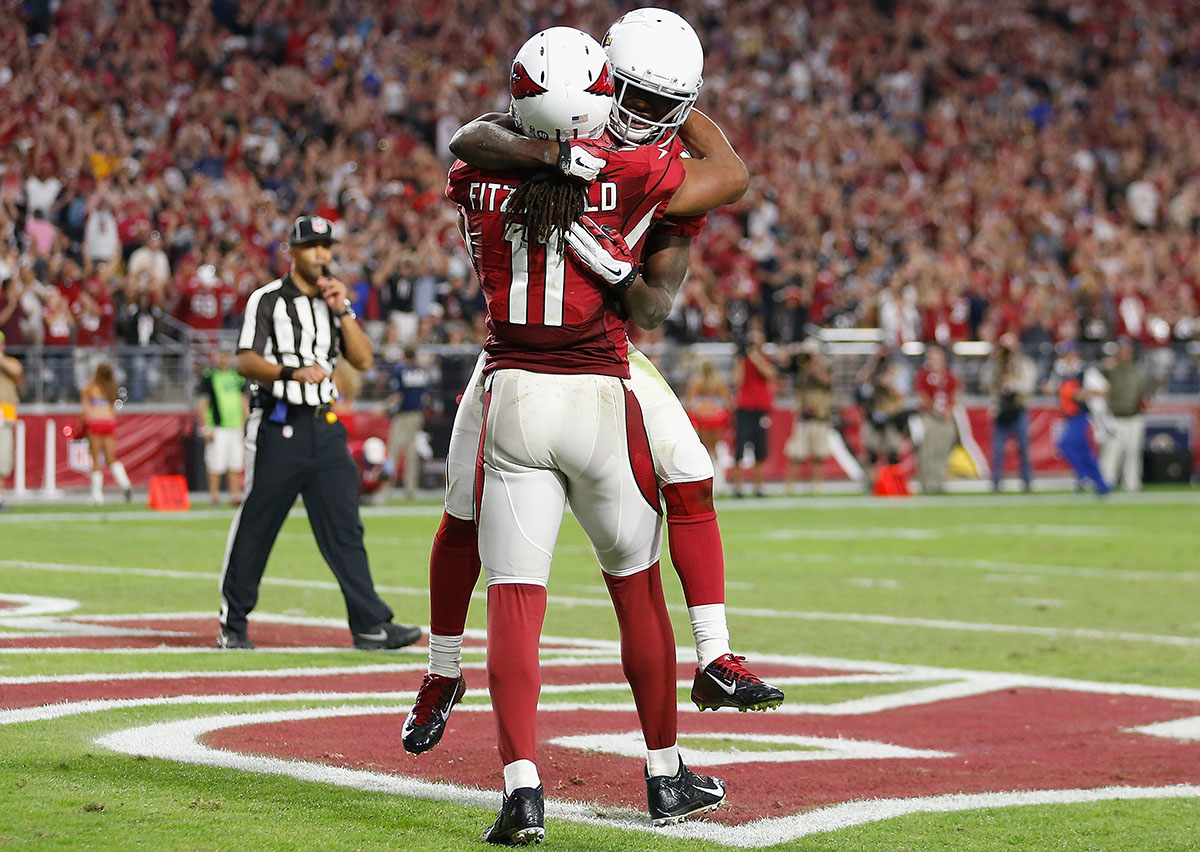 Typically, the play of a 35-year-old quarterback less than a year removed from his second ACL tear would be headed in only one direction, but to hear Kitchens tell it, that’s not the case with Palmer. Kitchens has been Palmer’s quarterbacks coach since the latter was traded to Arizona early in the 2013 season, and in his mind, age has done nothing to slow Palmer down. If anything, Kitchens says, he’s getting better. “Oh yeah, definitely,” Kitchens said about whether this is the best version of Palmer we’ve seen in Arizona. “And that’s mainly because he understands what’s going on around him, the people that he’s playing with, and the system that he’s in.”

Familiarity is a key component of Arizona’s growth, but for Palmer, it starts with health. The knee is still a concern, but another is the elbow problem Palmer’s dealt with for the past few seasons. A major knee injury is never a good thing, but for Palmer, the rehab process actually provided some hidden benefits. Not having to endure the daily throwing grind for the final 10 weeks of the year, Palmer’s arm got some much-needed rest. “It probably had more to do with just time off as far as his arm was concerned,” Kitchens says. That wasn’t all. As Palmer told The MMQB’s Jenny Vrentas this summer, the time off gave him a chance to step back and correct some mechanical flaws that would sometimes creep up as he made his progressions. By consciously keeping his weight on his toes as he made his reads, Palmer said, it allowed him to more easily step up in the pocket and extend plays just a bit further.

“It will help my completion percentage, it will help with my accuracy and it will also help us as a unit, because I won’t be making my left tackle’s job as difficult,” Palmer told Vrentas. “In turn, I’ll be able to step into more throws. As I’m getting to my second and third and fourth read, I’m holding onto the ball a little bit longer and that pocket is getting slowly smaller, so it will give me more room to work with inside the pocket because I will be more centrally located.”

Of all the strides Palmer’s made since arriving in Arizona, that ability to take pressure off his line is the one Kitchens points to first. “I think he’s above and beyond where he was protection-wise,” Kitchens says. “He knows the adjustments. That’s probably the no. 1 thing.” Through his first two seasons, Palmer was pressured on 27.4 percent of his dropbacks, which put him in the bottom third of the league. Through two games this year, it’s 20.7 percent, near the middle of the pack.

Part of that improvement is a product of moves the Cardinals have made along the offensive line. Signing Jared Veldheer last offseason has provided some long-awaited stability at left tackle, and this week, Palmer and the offense will finally unveil Mike Iupati, the other half of Arizona’s high-priced left side. Iupati’s strength has always been as a run-blocker, which is welcome news for a Cardinals team that finished 30th in rushing DVOA a season ago. With the way Palmer and his receivers are playing, if adding Iupati and mixing in a bit more of touchdown machine David Johnson can give this team a bit more pop in the running game, this has a chance to be one of the more dangerous offenses in the entire league. Just don’t tell that to Bruce Arians.

The Best Beef in the NBA Is Doc Rivers vs. Mark Cuban