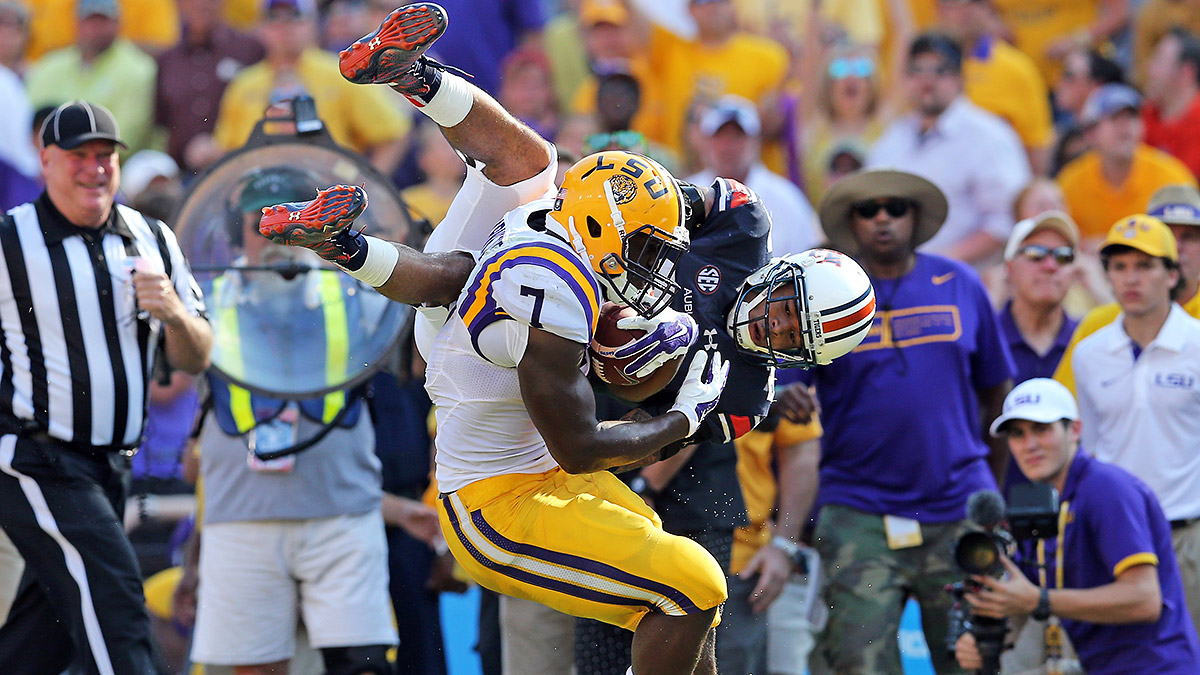 With the NCAA considering dumb rule proposals, Bret Bielema making new enemies, and Chuckie Keeton suffering a knee injury, the 2015 college football season has officially kicked into high gear. So, too, has the Heisman Trophy race, with several contenders starting to separate themselves from the pack. While some preseason darlings have faded, others have flourished, and a few dark horses have emerged, too. As we head into Week 4, let’s examine Bovada’s latest batch of Heisman odds and take stock of this increasingly compelling race.

Fournette’s Week 3 performance was so remarkable that it compelled me to watch the entirety of LSU’s otherwise uneventful blowout over Auburn instead of tracking Northern Illinois’s surprising upset bid at Ohio State, Kizer Permanente’s debut as a starter, and the adrenalized pointsplosion between Memphis and Bowling Green. The prospect of missing seeing Fournette do something like this was simply too unsettling:

As it turns out, those Adrian Peterson comparisons were pretty apt. Fournette has established himself as the clear-cut Heisman front-runner, and it seems like only a salacious email scandal could bring him down right now. Moreover, with a relatively easy stretch of games looming for the Tigers, he should remain the favorite for quite some time. His ability to turn in Heisman-worthy performances in November — a month in which LSU travels to Alabama and Ole Miss and hosts Arkansas and Texas A&M — will ultimately decide his fate, though.

I don’t mean to dismiss Chubb’s impressive start to the season, but it’s hard to get too excited about his Heisman candidacy when you consider how utterly meek Georgia’s opponents have been: Louisiana-Monroe, Vanderbilt, and some random FCS school I don’t care to look up — not exactly a murderers’ row, you feel me? He’ll get his opportunity to shine against the SEC’s big dogs in due time, but for now — wait, what? That was South Carolina playing against Georgia on Saturday? Are you SURE about that? I could’ve sworn it was, like, Marist or some shit.

Weak opening slate aside, the Dawgs seem legitimately good this year, and Chubb is their workhorse. If they manage to become the first East Division outfit to win the SEC since 2008, he’ll likely net an invite to New York. Still, it’s going to be difficult for him to sufficiently distinguish himself from Fournette, to say nothing of guys like Ezekiel Elliott, Dalvin Cook, and Derrick Henry. College football is overflowing with talented running backs these days, and as Andrew Sharp recently outlined, Chubb is probably the “least spectacular” of the bunch. That doesn’t bode well for his Heisman chances, especially given the unfortunate reality that the award is as much a popularity contest as it is a recognition of the sport’s best player.

Through no real fault of his own, Boykin’s odds have slipped quite a bit since the preseason. While Boykin has enjoyed a strong September, Fournette and Chubb are playing on another level right now, and earning more headlines as a result. Still, Boykin has the built-in advantage of being a quarterback, and TCU’s schedule is conveniently set to climax in late November (with tilts versus Oklahoma and Baylor), when Heisman voters are most persuadable. He’ll be in this for the long haul, provided he doesn’t slip up against Kliff Kingsbury’s high-flying Red Raiders this weekend.

Elliott has been fine this season, but “fine” doesn’t cut it in the Heisman race, especially against teams like Hawaii and Northern Illinois. In general, he seems to play to the level of Ohio State’s competition, which is terrific if you’re facing Alabama or Oregon, but not so great when your next three opponents are Western Michigan, Indiana, and Maryland.

In the cinematic classic Like Mike, Lil’ Bow Wow’s character requires a lightning-struck pair of sneakers to play basketball at a high level. Similarly, I’m starting to think that Elliott needs to wear his now-illegal crop top to achieve true greatness on the gridiron. I hope I’m proved wrong on this, but it’s becoming hard to deny the crop top’s mystical powers.

Just when you think USC has finally returned to glory, the Trojans give up 41 points to Stanford, a team that failed to reach the end zone against freaking Northwestern. What the hell, USC? One more outing like that and Sark’s going to get the Lane Kiffin treatment from Pat Haden. (That’s not a joke, by the way: It genuinely seems like Sark is already on the hot seat, and Haden’s job may not be safe, either.)

Of course, Kessler isn’t responsible for USC’s defensive woes, but team success is typically a prerequisite for winning the Heisman. In fact, Johnny Manziel (2012), Robert Griffin III (2011), and Tim Tebow (2007) are the only Heisman winners since 2003 to have not played in the national championship game, and it goes without saying that Kessler isn’t quite as transcendent as those guys. Consequently, his 10-1 odds seem way too short.

Can we just stop for a moment and appreciate that someone named “Seth Russell” is considered a Heisman favorite? He sounds like he should be nerding out in the library on Saturday afternoons, but instead he’s spearheading the Bears’ prolific passing attack. Art Briles is a goddamn sorcerer.

Russell has nine touchdowns through two games, but it’s hard to overlook his three interceptions against Lamar. He won’t be able to get away with such recklessness when Baylor faces quality Big 12 foes later in the season, and his candidacy could fizzle out soon as a result. Savor his reign while it lasts.

Henry faces the same dilemma as Chubb — having to stand out from the crowd of über-talented running backs in college football, namely SEC foe Fournette — with the added pressure of playing for a team that has already suffered a loss and is thus perilously close to being eliminated from the playoff race. Then again, it’s impossible to watch his highlight reel against Wisconsin and not deem him worthy of strong Heisman consideration.

With Michigan State up to no. 2 in the AP poll and still riding high after defeating Oregon in Week 2, Cook just needs to tread water for the next few weeks to remain in the thick of the Heisman race. Barring an unforeseen setback, his candidacy will ultimately come down to his performance at Ohio State in Week 12. If he can lead the Spartans to victory in Columbus and an undefeated regular season, he’ll almost surely snag an invite to New York; if not, his play probably won’t be jaw-dropping enough to make him a finalist.

When it comes to the Heisman, a lackluster September can easily be forgotten with a strong enough October and November. This is great news for Jones, whose fledgling campaign is on treacherously thin ice after the QB got benched against Northern Illinois. Lucky for him, J.T. Barrett didn’t look much better in relief duty, so Jones will remain the starter … for now.

Nevertheless, it’s clear that he’s been given a short leash, and the same concerns about Ohio State’s weak schedule outlined in the Elliott section apply here, too. Jones hasn’t looked like a Heisman contender (let alone a potential first-round pick) since torching Virginia Tech on Labor Day, and he can’t coast off preseason hype forever.

The self-proclaimed “white Michael Vick” and nephew of Jim Kelly might be the savviest Heisman candidate to come around in some time, boasting a solid redemption story, a truly elite Twitter account, and a burgeoning rap career:

Moreover, he plays in a decidedly Heisman-friendly offense, and he’s got the biggest win of any contender so far this season — a 43-37 upset of Alabama. (Beating Bama is always a great way to garner the support of casual fans.)

Most important, the football gods are very much on his side:

I still don’t think he’ll win the Heisman, but I definitely want him to — if only for the possibility of him rapping his acceptance speech as the past winners stare on in horror.