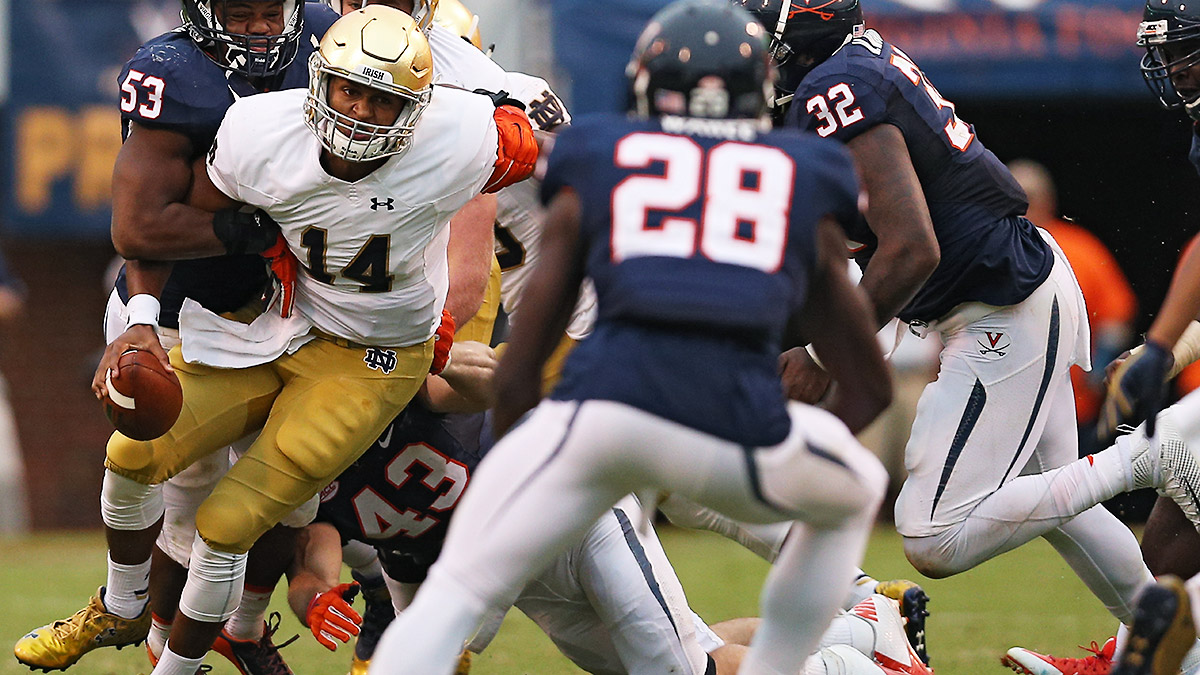 Who’s That Guy is an ongoing Grantland series and an orientation tool to use in the vast sports landscape. And, hey, college football is part of that landscape!

Does this definitively prove that the luck of the Irish is a TOTAL MYTH? Between Zaire’s untimely demise, starting tailback Tarean Folston’s ACL tear in Week 1, and defensive tackle Jarron Jones’s MCL tear this preseason, it’s hard to argue otherwise. But then again …

What? The redshirt freshman1 did lead the Irish to a miraculous comeback victory over the Cavaliers, connecting with Will Fuller for a 39-yard go-ahead score with 12 seconds left in the game, so let’s call it even.

What a dime! Give this man a nickname. Fine, if you insist. How about “Kizer Permanente”? After all, his strike to Fuller was absolutely surgical, and it even rendered one Virginia fan comatose.

How did Kizer perform outside of that one pass, though? Not nearly as great. While his stat line was perfectly adequate — 8-for-12 for 92 yards and two touchdowns, with a QBR of 75.1 — Kizer seemed flustered, indecisive, and occasionally overwhelmed when he came in to relieve Zaire. Of course, it’s only natural for an untested redshirt freshman to experience some growing pains, especially on the road, but there’s no denying the simple fact he’s a significant downgrade from Zaire.

So are Irish fans pining for Everett Golson right now? They’ll never admit it publicly, but yes, they most certainly are, even after his subpar outing for Florida State against South Florida in Week 2. However, when Golson commits four wacky turnovers against Boston College on Friday night (or whenever; you can bet your ass it’s happening at some point), they’ll remember why he was usurped by Zaire and then transferred to FSU in the first place, and will eagerly count their blessings.

Should Domers give up on this season already? Maybe hold a candlelight vigil or something? Watch Rudy and reminisce about the 1983 Liberty Bowl? OK, that’s probably not necessary … yet. Kizer should look better on Saturday against Georgia Tech after a week of first-team snaps in practice, and I don’t think he’ll have much trouble dispatching Week 4 opponent UMass. (God help him if he does.) For Kizer, the real test will come in Week 6’s matchup with Clemson in Death Valley. A win would reestablish the Irish as legitimate playoff contenders, but a loss would effectively extinguish their championship hopes, especially if they’ve already stumbled against the Yellow Jackets, who always challenge opposing defenses. The Clemson game, which happens to pit Kizer against Deshaun Watson, will double as a battle to determine the best alternate spelling of “DeSean,” so there’s going to be a LOT on the line.

Does Brian Kelly still think his team can enjoy a successful season? You bet your butt he does!

"Heck yeah"—Brian Kelly, when asked if ND has enough depth to have successful season without Zaire

In all seriousness: Shout-out to BK for avoiding the H-word there. He doesn’t get enough credit for being well-mannered. Such a spectacular role model for the kids.

What was Kizer like in high school? The Toledo Central Catholic product was a consensus four-star recruit who received offers from just about every college in the country, including Alabama, LSU, and Michigan State. One notable exception: Ohio State, which refused to join the scholarship party. It’s a good thing Kizer didn’t end up becoming a Buckeye, though, or else he may not have seen the field until, like, 2019, as a grayshirt senior.

How did Kizer approach his game-winning drive? With blindingly simple and utterly irrefutable logic, it seems:

DeShone Kizer on the final drive: "It was time to play football. That's how I looked at it."

It was time for Kizer to play football — not hockey, wrestling, badminton, curling, competitive eating, or race walking, but football. So don’t knock his thought process here. It remains to be seen if he can maintain this sort of rigid focus for the rest of the season and put it to good use. But we’ll have an answer soon enough.

Time After Time: A Look at Week 1 in the NFL