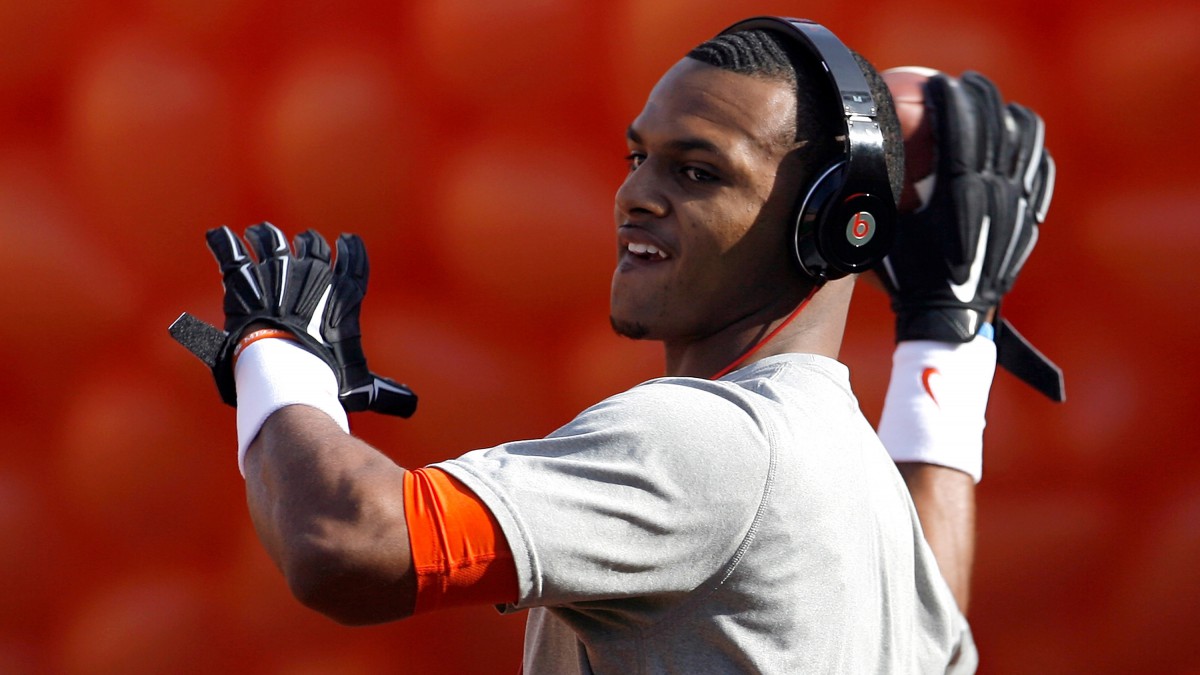 Clemson’s football team has just wrapped up a round of drills on an outdoor practice field, and two small children have cornered Deshaun Watson. Thanks in large part to the Tigers’ virulent orange and purple uniform scheme, their presence is visible from as far away as low earth orbit, but fans don’t usually get this close, and now the slightly larger child has taken it upon himself to interrogate the starting quarterback. He wants to know if Watson’s surgically repaired knee still hurts. He wants to know what is going on with the renovations to Memorial Stadium across the street. He is curious why Watson’s practice helmet is missing Clemson’s signature paw print icon. Now he would like to try on the helmet.

Watson cautions him: “It’s sweaty.” The moppet is undaunted. The adorability is off the charts.

This scene would be the most sickeningly precious PR tableau of the preseason if it were staged, but this is all just happening, on a stupefyingly muggy Monday morning in South Carolina, and there’s almost nobody there to see it. It’s tiptoeing right along the edge of too good to be true, which is a sensation that comes up a lot when discussing Watson.

Of course, Clemson is a safe space for stratospheric expectations when it comes to its sophomore sensation. Wherever his ceiling might hover, we don’t appear to have hit it yet. For those of you just tuning in at home, previously on the Deshaun Watson show: The nation’s top-ranked quarterback in the class of 2014 signs on as a future Tajh Boyd replacement, enrolling in school early to take part in spring workouts. A cracked collarbone knocks him out of the spring game. In the Tigers’ third contest of the season, he finds himself replacing Boyd a bit more immediately than he’d planned, getting swapped in for Cole Stoudt in an attempt to goose Clemson’s offense against Florida State. He makes his first collegiate start the following week, against North Carolina, completing 75 percent of his passes for 435 yards and six touchdowns. Two weeks later, he breaks his hand in the first quarter against Louisville and misses the next three games. In mid-November, he returns to play Georgia Tech and sustains a third sidelining injury, this time a knee sprain, in the first quarter of that game. He takes a game week off, promptly tears an ACL in practice, leads the Tigers to victory on one good leg in their regular-season finale over loathed in-state rival South Carolina, and undergoes knee surgery in December.

Within that narrow window in which we could actually see Watson play football, here’s what we were treated to: Ninety-three completions on 137 attempts for 1,466 yards. A 67 percent completion rate. Fourteen passing touchdowns, five rushing scores, and two interceptions. And just a general sense that, at 19 years old, the game already looks slow when seen through his eyes, that he can already see the Matrix. There are caveats in both directions with this stat line. These were not world-beating defenses Watson was crushing. But most of the football we got to see him play came in the first half of a true freshman season. So with all of that in mind, what do we know? For select stretches of time, with three to four fully functioning limbs, he looked like that rare player swept in on a wave of hype who actually manages to keep his head above water. Now what?

You won’t get an answer from Watson, who prefers to let his play speak for him. Really, he prefers not to speak at all; it’s hard to hear him talking outdoors over a distant lawn mower, hard to fathom how his teammates can possibly hear him down on Death Valley’s field. He’s always been a quiet kid; he’s perfectly aware of his potential, but that knowledge isn’t outwardly affecting him, not even after that tantalizing glimpse of a first-year campaign. Every word out of his mouth is measured and matter-of-fact, and every sentence is like a torn page from a motivational quote-a-day calendar. “I feel very confident about myself and my team and the role I have,” he says. “I just try to be myself and take whatever comes with the position.”

Watson is simultaneously conscious of the burden about to be placed upon him to carry the Tigers, who suffered massive defensive attrition in the offseason, and dismissive of it. “If I just do my job and let everyone else do their jobs, there won’t be any pressure. We’ll just go out there and have fun and do what we love to do.” He won’t even name a new favorite receiving target. “I just go out there and find the open guy. And all my guys can make plays.”

Something more interesting happens, however, when you talk to Watson’s instructors, who are as ready to praise his work as he is reticent. The 2015 season is days away and every college football team in the country has coaches talking up their guys, but it’s not every day you hear the word “presence” when describing a 19-year-old kid, and it’s even rarer to hear a young player described with these kinds of superlatives.

“He was not a normal freshman,” says head coach Dabo Swinney. “It was truly like dealing with a guy who’d been here three or four years. I’ve had some great freshmen that were great players, but I’ve never had one that had the whole package. You try to start off with all these guys [without] assuming anything. You start with, ‘OK, here’s addition and subtraction,’ and then you try and work them up to algebra. He came in here and we’re talking calculus in about two days. That’s Deshaun.” 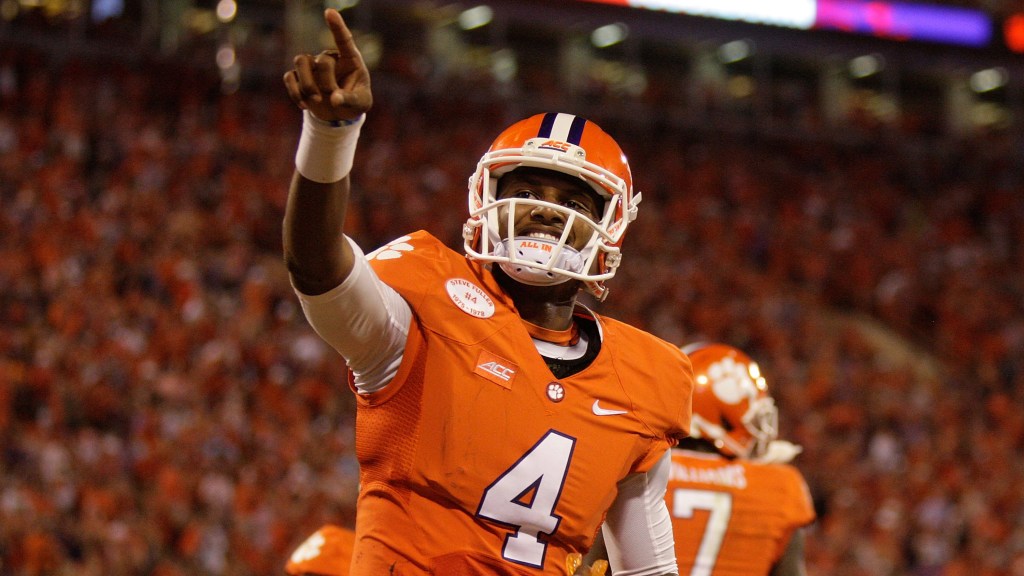 Clemson co-offensive coordinator Jeff Scott was tipped off to Watson’s ways earlier than he ever thought possible. One Friday night in January 2014, Scott pulled up in front of the football stadium to meet a recruit’s family coming in from out of town. He was a few minutes early, and he remembers the stadium being mostly dark, lit only by the ribbon boards beneath the upper deck. He saw two shadows moving down on the field and slipped inside, thinking some kids had broken in. “And the closer I got,” he says, “walking down, I could see it was Deshaun and Artavis Scott, one of our freshmen receivers. They’d go out there and run a play, and then they’d both run back to the middle of the field, and Deshaun had his playbook there on the ground. They’d talk about that play, and they’d go out there and run another one, and they were doing it in the dark, in January. They’d only been in Clemson for two weeks and it was a Friday night at 9:45.”

Ten months later, in that Tigers-Gamecocks showdown, a one-legged Watson would score four of the Tigers’ five touchdowns in their 35-17 victory. Two were goal-line runs. The other two were scoring passes to Artavis Scott, a 53-yarder in the first quarter and a 70-yarder in the third.

“You know,” says Jeff Scott, “as a coach, you call the play, they line up defensively, you’re standing on the sideline, you can see what defense they’re in, and you can already process where the ball needs to go before the ball’s ever snapped. And we’ve seen this over and over. And now Deshaun, in his first game, going through the progressions, he’s exactly right. Just every time. It’s all just happening right before your eyes.”

For Clemson to make a playoff run in 2015, it’s all going to have to keep happening, and in a hurry. This year’s offense will be a unit of less-than-familiar faces, and young ones. The Tigers’ second-year quarterback will have to be a reliable constant in a sea of changes, starting1 with the loss of most of the offensive line. Last season’s top running back is another young’n, sophomore Wayne Gallman. Along with Artavis Scott and 1,000-yard receiver Mike Williams, the squad is welcoming an incoming armada of talent at receiver, including one five-star prospect I want to mention simply because his name is Ray-Ray McCloud. The guy who’s supposed to be responsible for Clemson’s kicks and punts, Ammon Lakip, will serve a three-game suspension2 to open the season; two redshirt freshmen are competing to serve in his stead.

Defensively, the Tigers are going to drop off in production. It’s going to happen. That’s not a knock on this year’s squad so much as a recognition that last year’s beastly bunch just can’t be replicated that easily. Attrition took six major contributors off last season’s D-line; a seventh player, tackle D.J. Reader, left the team this week. The Tigers are down their two most prolific tacklers at linebacker and lose a couple of key guys in the secondary, but — key for entertainment purposes — they retain the self-proclaimed best corner in the country in Mackensie Alexander.

All of those new pieces won’t have a great deal of time to find out what works and what doesn’t in live action. Three of Clemson’s gnarliest-looking games fall within the first six weeks of the season, with a Thursday-night trip to Louisville in Week 3 followed by a bye and back-to-back visits from Notre Dame and Georgia Tech. So as the Tigers defense declines in experience and (at least for a little while) aptitude, how far along the axis can the rising line of Watson and the offense (assuming he clicks with the reshuffled line) meet them to offset that loss?

And what happens if, saints preserve us, he doesn’t even get the chance to try? If he’s knocked out of commission again? “All those injuries,” says Jeff Scott, “were really just kind of random. It’d be one thing if he was repeatedly throwing his shoulder out, but he’s not. We’re not going to handcuff Deshaun. For him to be his best, he’s got to be able to go out there and play. We want him to pick and choose times when he’s going to go dive over a pile, or going to step out of bounds.

“But it’s not really anything we can spend time worrying about now. If we do, it’s gonna be a long year.”

To hear his coaches tell it, the most important update between Watson 1.0 and Watson 2.0 isn’t something that will require all that much exertion, but it’s also not something that can really be taught on a greaseboard or in a VR helmet. He’s still learning how to build a catalogue of opposing defenses that can live between his ears, to master Clemson’s protections the way Swinney wants. But the coaches know that when it comes to preparation, Watson will do everything they ask of him, along with three or four more everythings. They want something now that only Watson can decide to give: more of himself. Having become one of the guys, he must now become the guy.

Watson’s fully processing all of this — he seems totally aware that with the starting job already in hand, his now is upon him, and it’s time to do something with all that upside. “The position I’m in, I don’t take it lightly,” he says. “I cherish every moment.”