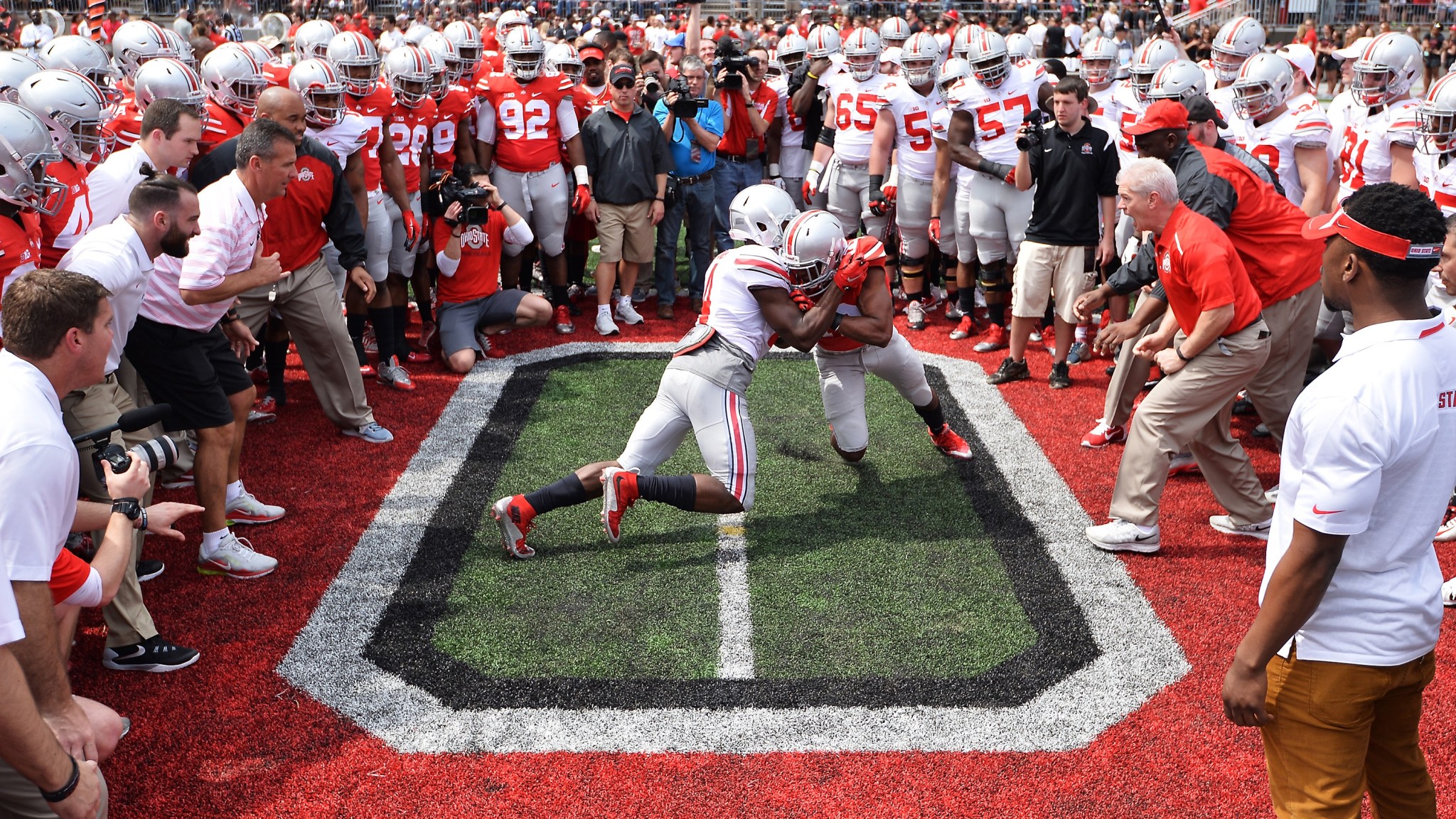 Brothers and sisters, we made it. We’re out of the wilderness. We’re through the weeds. We’re running through tall grass with the blessed season in sight — and the sweetest reward of autumn is upon us, in the form of Florida International at UCF and North Carolina versus South Carolina, both kicking off at 6 p.m. on a Thursday night …

Right, so, Week 1: never a time for the most heartstring-rending slate of games. Major programs are carrying out low-impact workouts against FCS schools. Big-name teams are facing off in the soulless confines of NFL stadiums hundreds of miles from either campus. Two Power 5 outfits are, this very week, traveling to games against directional Michigans. But just as Florida State hosts Texas State in the hopes of spotting any glaring game-plan flaws while in a low-stakes environment, so must you, the viewer, get in some warmup reps to avoid injury down the line. The season is a pot of still water, and you’ve got to turn the heat up slowly to really boil yourself alive in it.

Top 25 Matchups: One. Adult humans in charge of no. 20 Wisconsin and no. 3 Alabama, two teams with fantastic game-day atmospheres back home and mighty, passionate fan bases, have decided to spend a weekend in the Dallas area in September, on purpose. They’ll meet in the Jerrydome, site of the 2014 national championship game, a 2015 playoff semifinal game, and precious little in between. Maybe that’s it. Maybe this is like a football mission trip, the Tide and Badgers bringing the good word to the downtrodden folk of Arlington. That’s sweet of them.

How High Are the Week 1 Stakes? The height of pole bean vines turning brittle and keeling over on the trellis. The heat of grilled cheese you made and then left sitting on the counter for 10 minutes because you decided you also wanted tomato soup. The potency of a Styrofoam cup of Cheerwine left in the car during an afternoon at the driving range.

Destination Game: As long as the season continues to kick off over Labor Day weekend, there’s only ever going to be one best practice, which is to drop everything you’re doing and get to Atlanta for the people-watching event of the year. The annual neutral-site contest in the Georgia Dome brings in Louisville and no. 6 Auburn this season, pitting two of the sport’s most highly regarded offensive minds, Bobby Petrino and Gus Malzahn, against the last two defensive coordinators you’d want to bare-knuckle box, Todd Grantham and Will Muschamp. This game promises great fun in itself, but it’s the combination of ACC-SEC football and everything else happening in Atlanta at the same time that really gets the alchemy working: Dragon Con, Atlanta Black Pride Weekend, whatever happens to be going on at the Speedway (this week: Volkswagen show!), a 10K road race on Labor Day, and usually a Braves game or three thrown in (though mercifully, for everyone’s traffic-related cardiac events, there’s no home baseball this year). When you can walk into any centrally located bar and take a seat between a girl wearing fuzzy tiger ears and a tail arguing pass interference calls with a dude in a painstakingly reproduced Boba Fett outfit, you have to seize that opportunity.

Grape Job, Scheduling Edition: One brightly colored “YOU TRIED, PROBABLY” sticker to whoever had the bright idea to bring Georgia Southern to West Virginia (7:30 p.m. Saturday, Fox Sports Go). This could be a very interesting game for unaffiliated viewers, but “interesting” isn’t typically a priority for athletic departments when plotting out their opening-week schedules. Group of 5 teams brought in for visits are expected to lose in spectacular fashion and are paid handsomely for their trouble, and GSU ain’t in the business of losing easily. The Eagles are well-liked around here for their habit of terrorizing bigger programs. They’re also down one starting quarterback for this game and coming into Morgantown at night, so we’ll see, won’t we?

This Week in Why? On one hand, there are plenty of folks who’d like FBS teams to stick within the FBS for their nonconference games, and for those games to be played on the campuses themselves, where the deep, wacky regionalities of college football can be most keenly felt. On the other hand, who exactly went clamoring for Oklahoma State at Central Michigan (7 p.m. Thursday, ESPNU)? The answer has to involve T. Boone Pickens and fracking, surely.

This Week in Why Not? No. 5 Michigan State at Western Michigan (7 p.m. Friday, ESPNU). This one at least keeps the money in the state economy, and it provides ample opportunity to imagine what it would be like stuck in the backseat between P.J. Fleck and Mark Dantonio on a cross-country road trip.

Looming Upset-That-Is-Not: South Dakota State at Kansas (noon Saturday, Fox Sports Go). When North Dakota State beat Kansas State on opening weekend in 2013, that was a surprise. If Regular Kansas can stave off the advances of SDSU, which made it to the second round of last season’s FCS playoffs? That’ll be the upset.

FCS-on-FBS Game Actually Worth Watching: Youngstown State at Pitt (1 p.m Saturday, ESPN3), if only for the press conferences and on-field postgame interactions between Bo Pelini and Pat Narduzzi. Youngstown native Pelini’s hot-mic mouth is familiar, but first-time head coach Narduzzi is already proving to be the sound-bite sleeper hit of the season:

Pat Narduzzi w/ quite the first impression on the ACC teleconference, sharing a Scott Shafer tale from their URI days pic.twitter.com/Wt28m9GxeE

Thursday: Don’t rush home from work. Bank those early exits for later in the season, and give yourself until Michigan at Utah kicks off (8:30 p.m., FS1) to settle in. Once no. 2 TCU at Minnesota gets going (9 p.m., ESPN), alternate channels as needed. For a little extra kick, check in on UTSA at no. 22 Arizona (10 p.m., P12N) every now and then; the Roadrunners played the Wildcats within a field goal last year. True sickos or those with a four-day weekend already booked can stay up for a Colorado at Hawaii game that’s late even by Warriors standards (1 a.m., CBSSN), but don’t sacrifice too much sleep here; you’ll be up late the next three nights running.

Friday: There’s a once-and-maybe-future rivalry game lurking here with No. 4 Baylor at SMU (7 p.m., ESPN). These former SWC foes have one additional meeting booked after this year, but if Chad Morris can execute a turnaround job on the Mustangs, more would be welcome. Camp out here for the duration, then stick around to watch Washington at no. 23 Boise State (10:15 p.m., ESPN). Swig your drink every time the camera cuts to Petersen after a big Broncos play.

Sunday: Sleep in again. Sleep all day, maybe. Interact with your family. Acknowledge your pets. Find a lake and jump in it and stay there for a while. You don’t want to see what Marshall does to visiting Purdue.

Monday: There’s one game on the schedule, one that carries more than enough intrigue to stand by itself: no. 1 Ohio State at Virginia Tech, the defending national champs against the only team that beat them last year (8 p.m., ESPN).

'Cheap Heat' Podcast: Drama at 'NXT,' Hulk Hogan, and the Non-Resolution to 'SummerSlam'