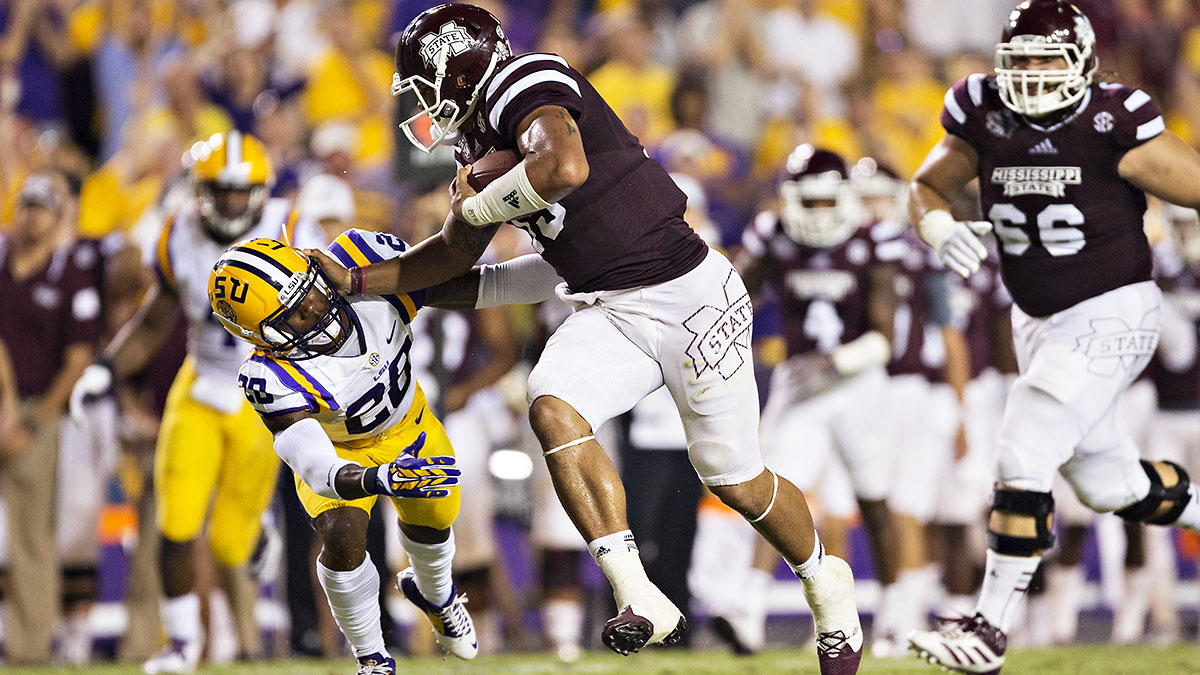 For the first time in three years, the previous season’s Heisman Trophy winner won’t be back to defend his crown. As a result, this year’s race is shaping up to be historically wide-open — so much so that Bovada’s latest set of Heisman odds included a whopping 37 players on whom to wager (provided you reside in Nevada, of course).

With the college football season mere days away, it’s time to heatedly debate the relative merits of the candidates in question, despite the fact that none of them has played a single down yet in 2015. Below, I’ve spotlighted 10 of them for your reading (dis)pleasure. Enjoy!

It’s easy to see why Boykin is considered the Heisman front-runner. He’s the top returning vote-getter from 2014, he plays for the nation’s no. 2-ranked team, and, most importantly, he’s a quarterback. If the Horned Frogs manage to snag a playoff spot this season, he’ll almost surely net an invite to New York, and he could earn one even if TCU stumbles.

However, with the notable exception of Marcus Mariota, the vast majority of recent Heisman winners were not preseason favorites. In fact, many of them essentially came out of nowhere — think Johnny Manziel in 2012, RG3 in 2011, or Cam Newton in 2010. I don’t think this is a coincidence: Heisman hype has got to be pretty damn stressful for a college student, perhaps more so than even homework, laundry, and fake-ID acquisition. Moreover, this hype creates absurdly high expectations for favorites, and tends to impact the voters as much as the candidates themselves. While Boykin seems particularly well suited to handle the stress, dealing with the pressure will still be a tall order.

If someone could convince Elliott that every game on the Buckeyes’ schedule is a playoff contest, the Heisman would unquestionably be his to lose. The dude is a known postseason world-beater:

Assuming Elliott can perform similarly against such Big Ten powerhouses as Rutgers and Illinois, his only challenge will be outshining his team’s starting quarterback — which, admittedly, won’t be easy.

Bovada may as well have listed “Ohio State’s starting quarterback” here, because unless Urban Meyer has secret plans to unveil the A-11 offense against Virginia Tech, it seems unlikely that both Barrett and Jones will contend for the Heisman this season. Barrett’s slightly better odds reflect the growing speculation that Meyer will eventually name him the Buckeyes’ starter — an assumption that was bolstered last week when Barrett was designated as a team captain over Jones.

Which is kind of a shame, because Jones’s style of play is much more conducive to a Heisman campaign than Barrett’s. Whereas Barrett’s game is based on robotic precision and careful risk management, Jones is a home-run-hitting, truck-stick-delivering, no-fucks-giving gunslinger who’s just as charismatic off the field as he is on it. Of course, this is probably why Meyer feels more comfortable with Barrett under center, despite the fact that Jones, y’know, led the Buckeyes to a national championship. Alas!

So, assuming Barrett earns QB1 honors, I’m not really feeling his Heisman odds. On the other hand, 12-1 is an absolute bargain for Jones if he ends up atop Ohio State’s depth chart. Sadly, though, it doesn’t look like that’s going to happen.

A friendly reminder for those of you with bad memories: Fournette struck the Heisman pose after his first career touchdown at LSU — a decidedly unremarkable 4-yard scamper against Sam Houston State. This clip will never get old:

While both Brent Musburger and Les Miles felt the need to issue a public condemnation of Fournette’s celebration, I was rather delighted by it, on account of having picked Fournette to win the Heisman in the preseason. At the time, few pundits were willing to go out on such a precarious limb, but now the Fournette bandwagon is practically overflowing with passengers. There’s a reason.

We can all agree that Fournette isn’t a particularly humble guy, yes? To be clear, that’s not meant as a criticism of Fournette, because I don’t think many folks would be humble if they had been compared to Michael Jordan and Adrian Peterson in high school. I’m simply trying to establish one of Fournette’s character traits, because it makes this quote of his from SEC media days all the more astonishing:

Leonard Fournette on Nick Chubb: “He’s the best running back we have in the SEC right now. He's better than me."

Even Fournette worships at the Church of Chubb, and that should make SEC defenses very, very scared. Good luck stopping these guys.

Yes, I’m the one who mocked Prescott’s Heisman chances last year and vowed to get “DAK ATTACK” tatted on my chest if he led the Bulldogs to victories over Texas A&M and Auburn, which he promptly did. No, I never actually got inked up. (Sorry, not sorry.)

If it’s any consolation to the good folks of Starkville — and why wouldn’t it be, considering my utterly impeccable track record as a Heisman prognosticator? — let it be known that I do like Prescott’s Heisman prospects this year. He’s the only established quarterback in the SEC, he plays in an exceedingly QB-friendly system, and he’s surrounded by plenty of solid weapons to boot. All he needs to do is update his campaign sign for 2015:

Remember, people: HE ALREADY KNOWS THE POSE. As any esteemed Heisman pundit will tell you, that’s half the battle.

Looking for a running back with more favorable odds than Elliott, Fournette, or Chubb? Perine’s your guy. You probably remember him best for obliterating Melvin Gordon’s week-old single-game rushing record against Kansas, and there’s no reason he can’t inflict even more damage on the Big 12’s weak-ass defenses this year. He’s the closest thing we have to a human bowling bowl — that’s science.

Fool me once, shame on you. Fool me twice, shame on me. Fool me three times, and you’re probably Everett Golson, trying in vain to mount a Heisman campaign despite only beating out Sean Maguire for the starting job a few days before the season. The Golson-Maguire competition was the antithesis of the Barrett-Jones competition, as Jimbo Fisher was just going to make the winner hand off to Dalvin Cook 40 times per game anyway, so the Heisman talk is a bit outrageous. Jameis Winston might have a better chance of winning it this year than Golson does. (Please pray for me as I prepare to face the wrath of #FSUTwitter.)

USC CB/WR/KR Adoree’ Jackson: Off the Board

Considering that oddsmakers won’t even acknowledge Jackson’s Heisman candidacy, it was pretty bold of the 19-year-old sophomore to casually list the award among his many goals for the 2015 season. Then again, Jackson’s omission had less to do with his football-playing ability than with the unfortunate fact he doesn’t play a Heisman-friendly position. But if any non-full-time offensive player is going to beat the odds, I’d put my money on Jackson, whose all-purpose versatility evokes memories of former Heisman winner Charles Woodson. That’s a good start; let’s just hope he knows the pose as well as Prescott.