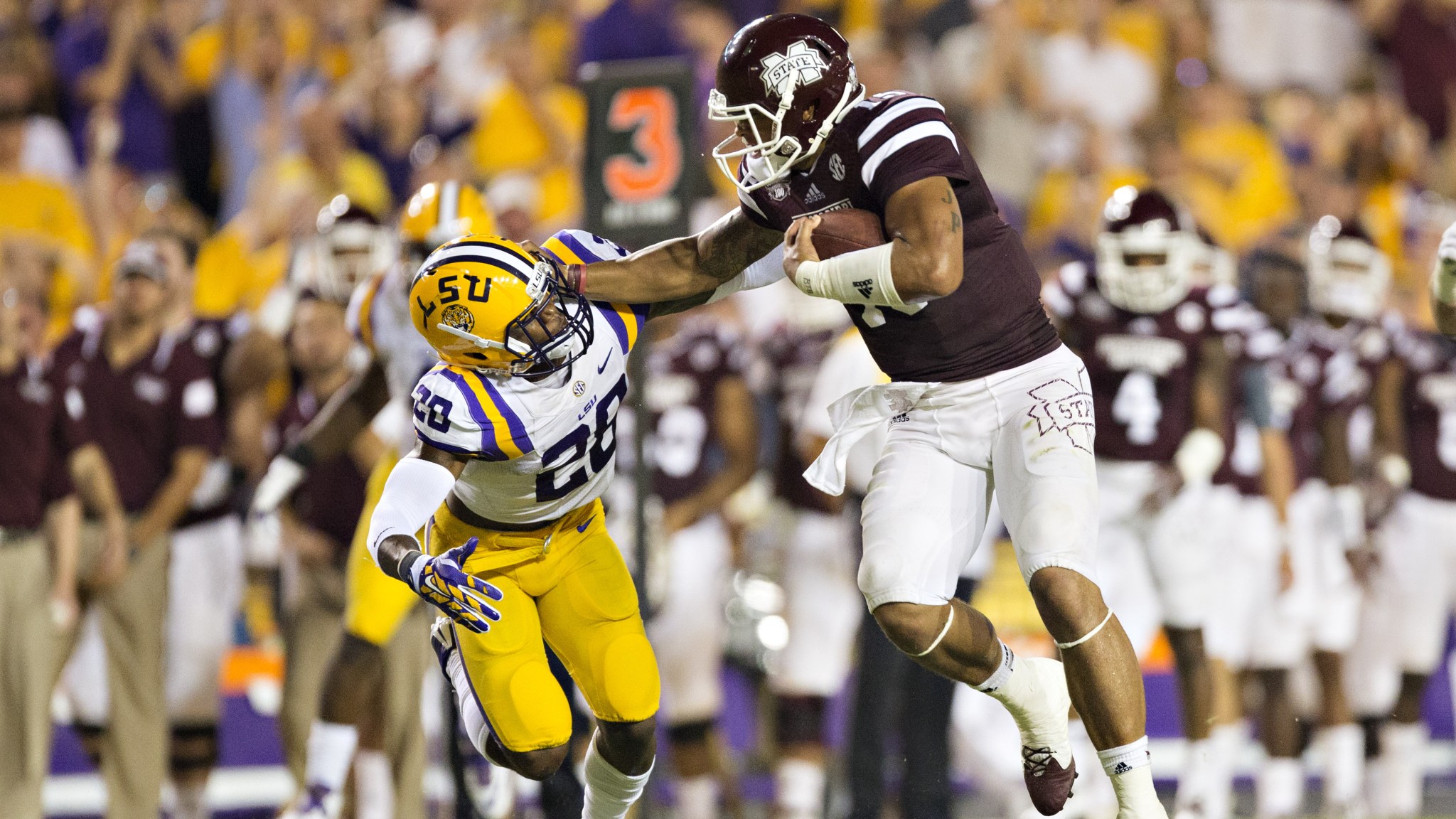 Typically, this space is reserved for a Heisman front-runner, but it feels unfair to give Trevor Knight that label, after his mediocre outing in Morgantown. That being said, Oklahoma looks like the best team in the FBS, and its remaining schedule is probably the easiest among the top College Football Playoff contenders. As such, there’s a good chance the Sooners are ranked no. 1 when it comes time to vote on the Heisman, and the quarterback on the top-ranked team usually gets a courtesy invite to the ceremony. Sorry, Ameer Abdullah, but that’s just the way things work around here.

We were as startled as anyone to see Dak Prescott anointed as a Heisman sleeper in the preseason. Yes, the raw talent was there, but it seemed inconceivable that his middling debut campaign and Mississippi State’s daunting SEC West schedule could ever result in this: Now? Prescott has made believers of us all. The Bulldogs just dispatched no. 8 LSU in Death Valley, and Prescott was the consummate dual threat, accruing 268 yards and two touchdowns through the air, and 105 yards and a score on the ground.

Naturally, the Tim Tebow comparisons have gained steam, and even Dan Mullen is getting in on the fun. “The way they’re similar is they’re winners,” he told Fox Sports, which is a hard thing to dispute as long as the Bulldogs remain undefeated. After a fortuitously scheduled bye, Mullen’s squad has the luxury of hosting Texas A&M and Auburn in consecutive weeks, thus allowing Prescott the opportunity to outduel both Kenny Hill and Nick Marshall. If he manages to pull this off, I vow to get “DAK ATTACK” tatted on my chest.

It was all good just a week ago. Well, not really: We’ve long maintained the unlikelihood of Jameis Winston’s repeat chances, and he wasn’t exactly off to a sensational start. Still, no one expected him to be out of the race this early. Winston effectively euthanized his Heisman candidacy by referencing a vulgar meme in public, resulting in his suspension from Saturday’s game against then–no. 22 Clemson. To be fair, this was a really innovative way to go down, and it also produced what will surely become the signature moment of Winston’s sophomore campaign, in which a perturbed Jimbo Fisher passive-aggressively instructed him to shed his uniform.

You may be tempted to dismiss Melvin Gordon’s five-touchdown, 253-yard performance because it came against Bowling Green’s 128th-ranked defense. Generally, this inclination would be fair, as Heisman contenders are expected to dominate woefully inferior competition. In this case, however, it would be a grievous mistake to overlook what Gordon accomplished. He saw just 13 carries on the day, resulting in a preposterous 19.5-yard average. Plus, Bowling Green’s defense is essentially SEC-caliber, regardless of its abysmal ranking. I mean, the Falcons beat Indiana two weeks ago, and Indiana just beat Missouri, so this is pretty much irrefutable … kind of like the rewatchability of Gordon highlights. Seriously, try not to rewind this video. You’ll fail every time.

Shouts to Amari Cooper for showing the world what we already knew. Ten receptions for 201 yards and three touchdowns may prove to be a fatal blow for nominal defensive guru Will Muschamp, and Blake Sims is suddenly an asset to Cooper’s campaign, as opposed to the liability we’d thought he’d be, back in April. Cooper certainly looks like the best player in the country; unfortunately, his position may not be in compliance with the Heisman’s unwritten guidelines, which dictate that quarterbacks and running backs are inherently more deserving of votes than wide receivers.

First things first: Zeek Bigger deserves Heisman consideration on the strength of his name alone. Unfortunately, that’s unlikely to happen, so it’s a good thing his on-field credentials are even stronger. The redshirt junior leads the FBS with 54 tackles, 17 of which came in Saturday’s 70-41 rout of North Carolina. He added a 46-yard pick-six for good measure, extending the Pirates’ reign as the state champs of North Carolina to an unprecedented two years.

Would Bigger be a larger part of the Heisman discussion if he attended Notre Dame and came with an affecting, albeit untrue, off-the-field sob story? Perhaps. But for now, let’s just appreciate that he managed to beat out Vic Beasley for Walter Camp Defensive Player of the Week honors and has his squad in the AP Top 25 for the first time in six years. They don’t have no award for that.

When it comes to the Heisman race, Nick Marshall is the anti–Kenny Hill: Despite a decent amount of preseason hype, he’s stayed in the background early on, quietly taking care of business against a much improved Arkansas and an always difficult Kansas State. Meanwhile, Hill entered the season with little fanfare and promptly torched South Carolina on opening night, announcing his candidacy with a bang; predictably, he’s continued to accumulate gaudy numbers, against teams like Lamar and SMU.

In the end, Marshall’s strategy may pay off. After all, the Heisman electorate places a major emphasis on late-season performance, and Hill will almost certainly begin to “regress” once he starts facing SEC opponents on a weekly basis. Essentially, he’s created unrealistic expectations for himself. Marshall is free to progress at a steady, reasonable rate. Of course, this argument will become moot if Mississippi State beats both the Aggies and the Tigers next month, in which case Prescott is the undisputed king of the SEC West.