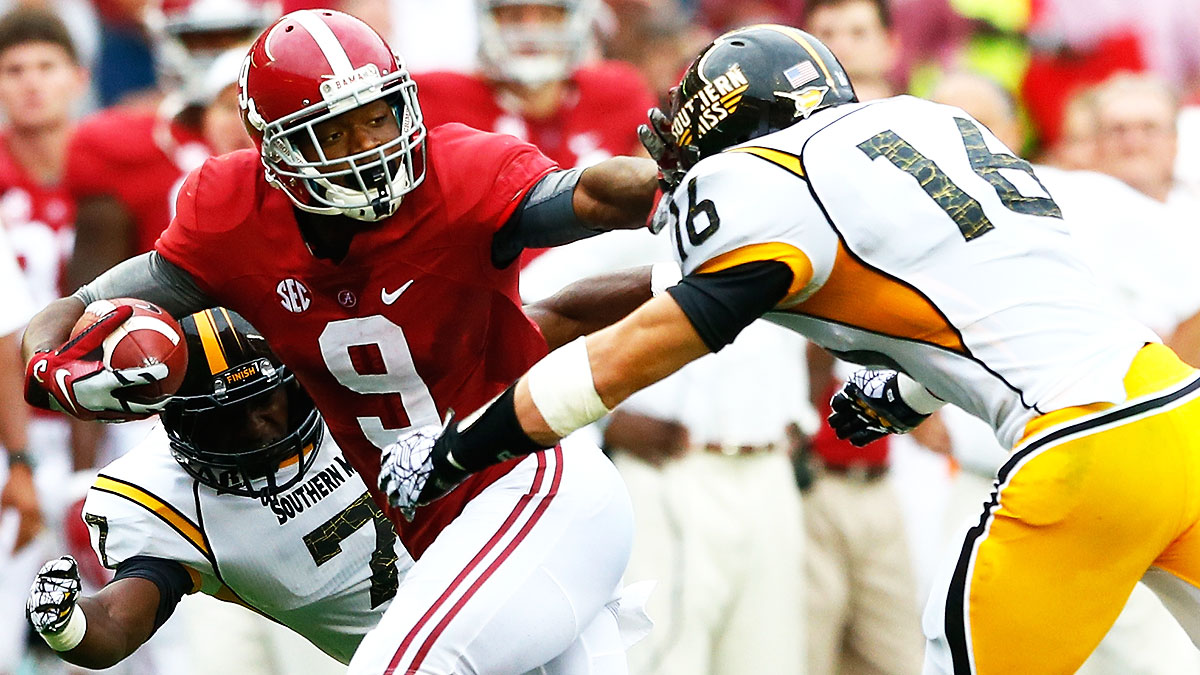 While Petty still trails last week’s honoree, Marcus Mariota, as the clear Heisman favorite, the Baylor quarterback reestablished himself as a top contender with a nearly perfect outing against Buffalo. The same Buffalo that barely scraped by DUQUESNE and gave up a whopping 47 points to an otherwise scoreless Army team, you ask? Yes, that Buffalo. Still, considering Petty was playing with cracked bones in his spine, the strength of his opponent seems beside the point. Petty needed to prove he could still reduce a defense to ashes, and that’s exactly what he did.

Plus, it’s not like Baylor’s conference schedule is teeming with potential stumbling blocks. With just three ranked opponents on deck (no. 4 Oklahoma, no. 25 Oklahoma State, and no. 20 Kansas State), the Bears are relatively well positioned to go undefeated, which is pretty much essential for Petty’s Heisman hopes. As Case Keenum, Nick Florence, and countless others have demonstrated, a one-dimensional QB like Petty can post impossibly eye-popping numbers and it still won’t resonate with voters as much as a zero in the loss column. For everyone but RG3- or Johnny Manziel–level playmakers, this is the hard-and-fast rule.

As such, my primary concern with Petty’s candidacy isn’t football-related; it’s that he may have already lost in the court of public opinion. Drake, our society’s leading Heisman pundit, was recently spotted wearing a Mariota jersey, seemingly ending Petty’s race for good:

Kudos to Alabama starter Blake Sims for keeping backup Jacob Coker at bay by using the human cheat code known as “Amari Cooper,” who leads the FBS in receptions (33) and is averaging a robust 151.3 receiving yards per game. I can’t imagine a better strategy for Alabama’s endless quarterback competition than “target Cooper at all times,” and Sims’s strict adherence to that plan is truly something to behold.

Unfortunately, it’s almost impossible for a receiver to take home the Heisman, though Cooper does have one factor working in his favor: Few other wideouts play alongside this many dominant running backs. With the unholy backfield trinity of T.J. Yeldon, Derrick Henry, and Kenyan Drake commanding so much attention from the opposition, Cooper could continue to face favorable matchups and produce at his current rate. And if he does, he should at least earn an obligatory first-place vote or two.

Yes, it’s completely unfair to downgrade a running back after he rushed for 131 yards and a touchdown against a ranked opponent, but that’s what happens when your offensive coordinator is the notoriously run-averse Mike Bobo, whose refusal to feed Gurley near the goal line is probably why Georgia lost to South Carolina on Saturday. As a result, Gurley’s once-pristine campaign has taken a moderate hit, evoking a presidential candidate’s meaningful-but-not-devastating loss in the Iowa caucus.

On the bright side, the Bulldogs always lay an egg like this, so it’s good they got it out of the way in early September. While their margin for error is pretty much gone, an SEC East title (and by extension, an SEC championship and a College Football Playoff berth) remains in reach, which means Gurley’s Heisman hopes remain alive … for now. [Mike Bobo cackles maniacally.]

Allow your mind to wander and consider the possibility of Bo Wallace hoisting the Heisman Trophy at season’s end. Isn’t that a pleasant thought?

As luck would have it, it’s also somewhat realistic. Wallace leads the SEC in passer rating and yards per attempt, and he’s completing an astounding 75.5 percent of his passes, which is positively Colt Brennan–esque. He’ll be able to cement his candidacy for real in a few weeks against Alabama; if he pulls off the victory, I say we overlook the first half of the Boise game and just give him the trophy.

Heading into the season, the Florida State transfer with long-shot Heisman buzz was the aforementioned Coker, who appeared to have a firm grasp on Alabama’s starting job. Meanwhile, West Virginia’s Trickett was making headlines for misogynistic tweets, kissing Nick Saban’s daughter, and, well, not much else. However, after holding his own against the Crimson Tide and passing for 511 yards in a 40-37 win over vaunted Big Ten powerhouse Maryland, Trickett is the former Nole who’s enjoying fringe Heisman-contender status, which I refuse to take seriously unless the walking Head & Shoulders commercial manages to upset Oklahoma this weekend.

Foster’s Heisman credentials are almost too numerous to list, but I’ll try: He leads the FBS in all-purpose yards and yards from scrimmage; he’s the FBS’s third-leading rusher; he’s averaging an absurd 9.44 yards per carry; and he’s already reached the end zone five times. Nevertheless, he’s rarely mentioned as a Heisman contender, which brings up the unfortunate regional dynamics at play here — namely, that many Heisman voters are asleep or otherwise preoccupied when he’s playing. Consequently, I’m encouraging you all to write letters to your local voters advocating on behalf of Foster. If all else fails, at least he’ll have the Maxwell Award!