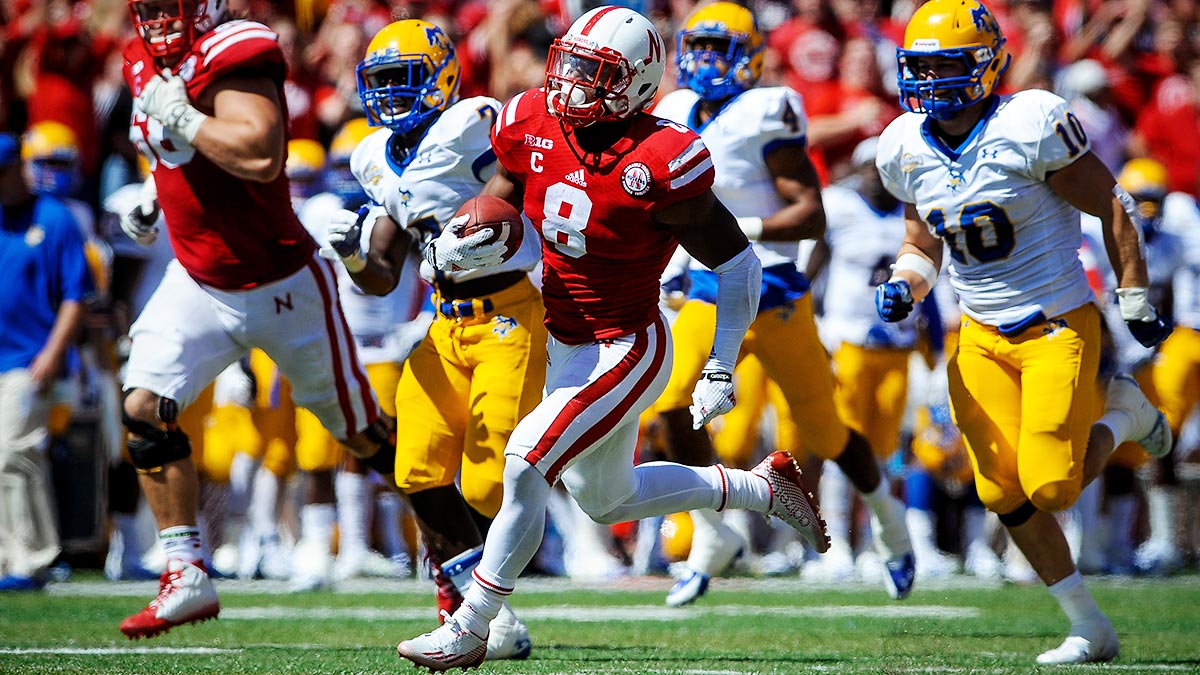 A good Heisman Trophy campaign includes all the trappings of a heated election: retrospectively hilarious bumper stickers, ridiculous taglines, and highly regional voting patterns. As such, it’s time to treat the race for the stiff-arm trophy like the overtly political enterprise that it is. So instead of running down the top candidates in traditional 1-10 fashion, I’ll compile a category-driven, semi-comprehensive guide to the race at large each week. My lists are bound to feature way too many quarterbacks and a regrettable paucity of kickers, but remember: I don’t make the rules!

Sure, Jeremiah Masoli was sporadically unstoppable and Darron Thomas nearly led Oregon to a BCS championship, but Mariota has proven to be the ideal operator of the Chip Kelly–Mark Helfrich magical mystery offense. Never was that more apparent than during the Ducks’ second-half incineration of Michigan State on Saturday. The Spartans could’ve held a four-touchdown halftime lead and it wouldn’t have mattered: When Oregon speeds into hyperdrive, no one can keep up. Not even Rich Homie Quan.

In spearheading that come-from-behind victory, Mariota effectively dismantled the notion that Oregon “can’t handle physical teams,” and in so doing usurped Todd Gurley in my official, albeit meaningless, Heisman rankings. (We now know the only thing that can stop Gurley: a bye week.) What’s more, Mariota boasts a significant lead over his quarterback brethren. Jameis Winston’s repeat campaign remains a near impossibility; Mariota’s fellow Pac-12 gunslingers Cody Kessler and Brett Hundley did little to help their causes in Week 2; and Everett Golson and Kenny Hill still have a long, treacherous way to go before voters cast their ballots in December. 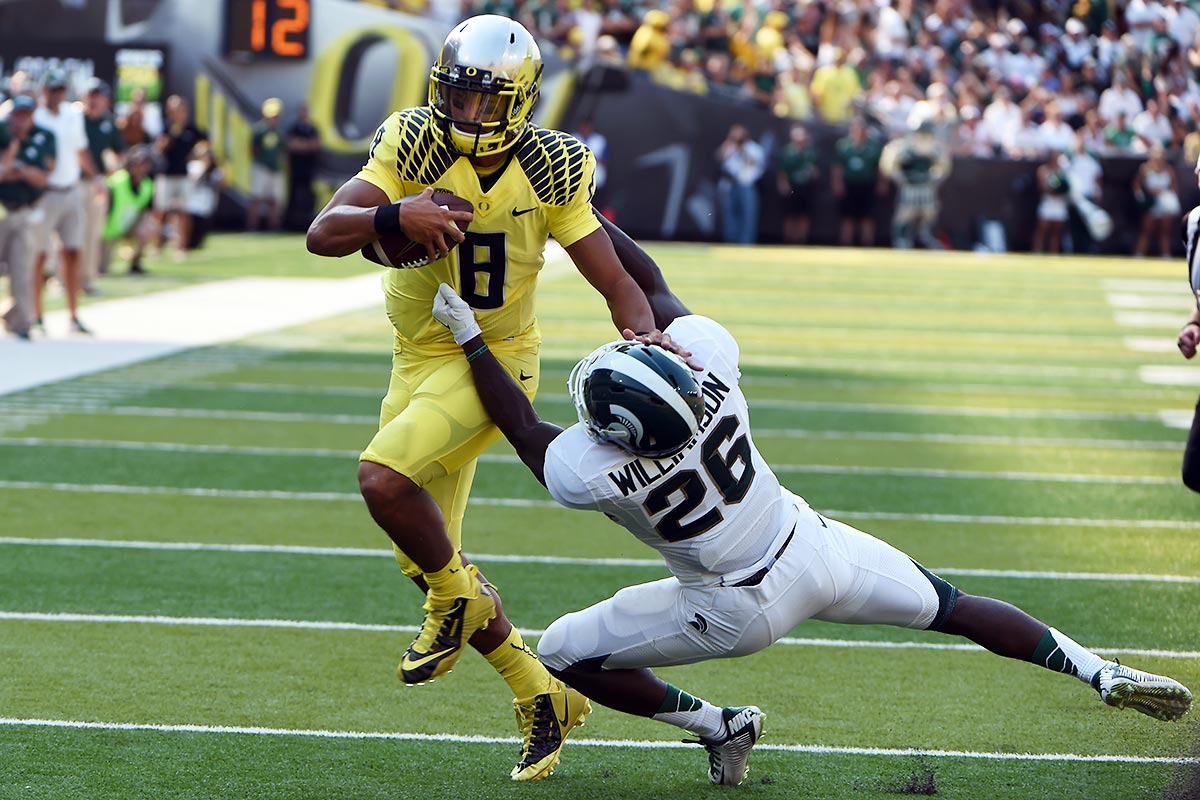 Conversely, Oregon’s schedule is fairly easy from here. UCLA has struggled to beat Virginia and Memphis in consecutive weeks, which is probably the most damning thing you can say about a college football team, and barring a meeting in the Pac-12 title game, the Ducks won’t have to face USC. Once again, Stanford appears to be Oregon’s only truly formidable conference opponent, and come on — Mariota has to beat the Cardinal once before graduating, right? [Peyton Manning shakes his head solemnly.]

Forget the Heisman — maybe the real question we should now be asking is whether Golson has leaped ahead of Mariota and Winston on draft boards. Saturday was that kind of night for the redshirt junior, who brutalized Greg Mattison’s Michigan defense with many impeccably precise, NFL-caliber throws.

In 2012, Golson was largely a product of his environment, which included eventual first-round pick Tyler Eifert at tight end, a stable of dependable backs and receivers, and one of the best offensive lines in the country. However, following a suspension for receiver DaVaris Daniels and heavy losses to the NFL, Golson has been forced to elevate his play while working alongside a relatively inexperienced supporting cast this season. His metaphorical semester abroad at George Whitfield’s Elite QB Factory seems to have paid dividends, but let’s hold off on anointing him a Heisman favorite until he completes next month’s test in Tallahassee.

Look, this isn’t about Lane Kiffin being averse to the ground game: In Saturday’s weather-shortened victory over Florida Atlantic, eight members of the Crimson Tide saw rushing attempts. Clearly, Kiffin intends to establish the run this season, at the possible expense of naming a starting quarterback. Still, no one carried the ball more than seven times, which put a major damper on Yeldon’s and Henry’s Heisman chances.

Of course, Kiffin’s job isn’t to worry about individual performances, so his decision to spread the wealth is perfectly understandable. There’s no reason to overwork Yeldon or Henry, especially this early on, and especially with a third-stringer as capable as Kenyan Drake. If this committee approach continues against stiffer competition, though, neither Yeldon nor Henry will accumulate the flashy stat lines needed to make a Heisman run, or as many opportunities to deliver a genuine “Heisman moment.”

Does this make Nick Saban a communist? You tell me.

If you’re like me, you didn’t waste any precious football viewing time on LSU’s 56-0 dispatching of Sam Houston State, which means you may have missed this thing of beauty:

Never mind that this pose came after a paltry 4-yard run, or that it resulted in a stern sideline lecture from Les Miles. Fournette is going to become the first true freshman in college football history to will himself to a Heisman, and it will be glorious.

If fellow linebacker and preseason Heisman contender Myles Jack is the face of UCLA’s defense, Kendricks is the backbone. Remember the earlier note about the Bruins’ skin-of-their-teeth victories over Virginia and Memphis? Well, those almost certainly would have been losses if not for this dude. 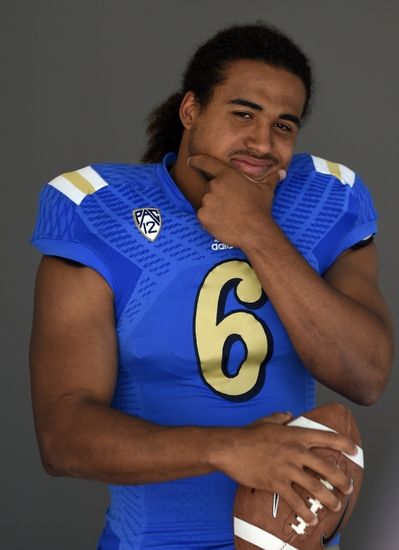 In just two games, the redshirt senior has amassed 26 total tackles, good for fourth in the FBS, plus a 37-yard pick-six. He seems to eat running backs and not really mind the fleshy aftertaste, probably because he’s already focused on finding his next meal. While he doesn’t have the luxury of playing running back for kicks, Kendricks has quickly established himself as the only defender in remote contention for the Heisman.

Here’s a look at Abdullah single-handedly keeping the Autumn of Bo alive:

To answer the obvious question: No, the magnificence of this play isn’t diminished by the fact that it came against FCS doormat McNeese State. In fact, Abdullah’s 58-yard catch-and-run actually capped off one of the Big Ten’s stronger showings of the weekend. We’re grading on a curve here, but between Michigan State’s inability to thwart Oregon, Brady Hoke’s futile stand against Notre Dame, and Ohio State’s total acquiescence to Beamer Ball, Abdullah deserves a fruit basket from Big Ten commissioner Jim Delany for his efforts.

The Nebraska workhorse currently represents the B1G’s best shot at the Heisman, and if he continues to produce at his current rate, the Huskers’ inevitable failings shouldn’t be held against him. Frankly, I don’t even want to imagine what Nebraska would look like without Abdullah, but it would probably involve duct tape, a midseason loss at Northwestern, and a series of interminable Tommie Frazier Twitter rants. The good news is that Nebraska’s next opponent, Fresno State, ranks 122nd nationally in rushing defense, surrendering an average of 267.5 ground yards per game, so offensive coordinator Tim Beck may as well disregard the concept of “passing” entirely.