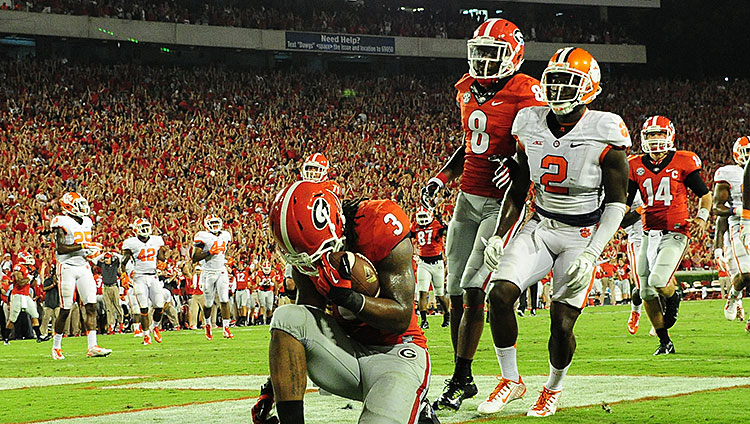 Sadly enough, I don’t have a Heisman vote. I do, however, have myriad Heisman opinions. With one week of college football in the books, now’s as good a time as any to share them. Welcome to Heisman Watch!

There are seriously four or five similarly spectacular Todd Gurley GIFs from Georgia’s 45-21 thrashing of Clemson, and I encourage you to view them all, for hours on end. Apart from restoring your faith in a benevolent higher being (… named Todd Gurley), they’ll make you wonder whether football, at times, can actually be a one-man sport, until you remember that Gurley barely played at all in the first half, and didn’t even get the majority of his team’s rushing attempts.

All of which is to say, the possibilities really are endless here. Unless you’re a Georgia fan, maybe you should just take cover and acknowledge Gurley’s total unstoppability.

Good job, good effort in the win over South Dakota. Your reward: A steel cage match with Pat Narduzzi. What fun! We’ll have a much clearer picture of your Heisman candidacy upon its completion; please stand by.

However, the answer to his question is obvious: Kenny Hill happened. Against South Carolina’s allegedly formidable defense, the redshirt sophomore completed 44 passes for 511 yards, three touchdowns, and countless Johnny Manziel comparisons, including one from Johnny himself. As a result, all-world freshman Kyle Allen’s much-anticipated debut has been postponed indefinitely, and Hill is already firmly entrenched in the Heisman race.

What’s more, Hill appears exceedingly well-positioned to take home the crown. He’ll continue to accumulate gaudy statistics in Sumlin’s offense, he’s got a preposterously talented receiving corps at his disposal, and the Aggies have a fairly easy go of it until mid-October, giving him plenty of time to build upon Thursday’s record-setting performance. Ultimately, though, the Kenny Trill campaign will come down to Hill’s play against the quartet of SEC heavyweights looming on the back end of Texas A&M’s schedule — Alabama, Auburn, Missouri, and LSU. This would normally be the spot for a caveat about the extreme unlikelihood of Hill leading his team to an undefeated season, but now isn’t the time for realism.

If Fresno State were the only team on USC’s schedule, Cody Kessler would be a virtual lock for the Heisman. That’s my main takeaway from the Trojans’ 52-13 dismantling of the Bulldogs, which felt like a carbon copy of last year’s Las Vegas Bowl. On both occasions, Kessler passed for four touchdowns and more than 340 yards, generally resembling a young Matt Leinart, rather than, say, an aging John David Booty.

While Saturday’s outing won’t mean much of anything if USC gets mollywhopped by Stanford this weekend, Kessler deserves credit for taking care of business against a markedly inferior opponent, unlike his crosstown hopeful, Brett Hundley, who struggled mightily to move the ball against — gasp! — Virginia.

This is why we strenuously advised you not to bet on Jameis Winston’s repeat Heisman campaign: The man can pass for 370 yards, hurdle multiple defenders for a sensational 28-yard score, carry his team to victory over a solid Oklahoma State squad, and still receive poor marks for his overall performance. Winston’s impending dominance is liable to be disregarded by the Heisman electorate on account of Florida State’s crappy schedule.

Is this unfair? Yes. Is it still bound to happen? Almost definitely. Like a spoiled kid on Christmas, the last thing Heisman voters want is last year’s model, and Winston is the Nimbus 2000 to Hill’s Firebolt.

Let’s start with the positives: Gordon posted characteristically excellent numbers against LSU, rushing for 140 yards and a touchdown on 16 carries. Unfortunately, he was largely absent in the second half, and the Bayou Bengals ended up staging a late comeback to win the game. It was almost as if Bret Bielema had never left Wisconsin!

Some salacious rumors made the rounds Saturday night as to why Gordon was MIA, but the truth turned out to be a whole lot worse: He suffered a hip flexor strain late in the second quarter, and while he now claims to be “healthy and ready to roll,” these issues tend to only metastasize with running backs.

Moreover, despite the impressive stat line, did anyone come away from Wisconsin-LSU feeling awed by Gordon’s showing? The Heisman is about entertainment as much as anything else, and Gurley (and Derrick Henry and Ameer Abdullah) provide a much better viewing experiences than Gordon. The importance of this cannot be overstated.

Then again, maybe I’m just incapable of rational thought after wagering on Leonard Fournette to win the Heisman. The next Adrian Peterson rushed for a paltry 18 yards on eight carries and ceded the spotlight to teammate Kenny Hilliard when the game was on the line. Whither BUGA Nation?

Devin Funchess is a walking mismatch, 230 pounds of cornerback-eating flesh. He’s also finally a full-time receiver and primed to cement his Heisman candidacy against Notre Dame’s undermanned secondary. Devin Gardner says Funchess has the potential to be the greatest wideout in Michigan history; sometimes a position change is the key to winning the Heisman.

Wingspan and a Prayer: Trying to Decipher the Massive Promise of Utah's Rudy Gobert

The 40 Most Atlanta Things About the Falcons in ‘Hard Knocks,’ Episode It's Over