Wingspan and a Prayer: Trying to Decipher the Massive Promise of Utah’s Rudy Gobert 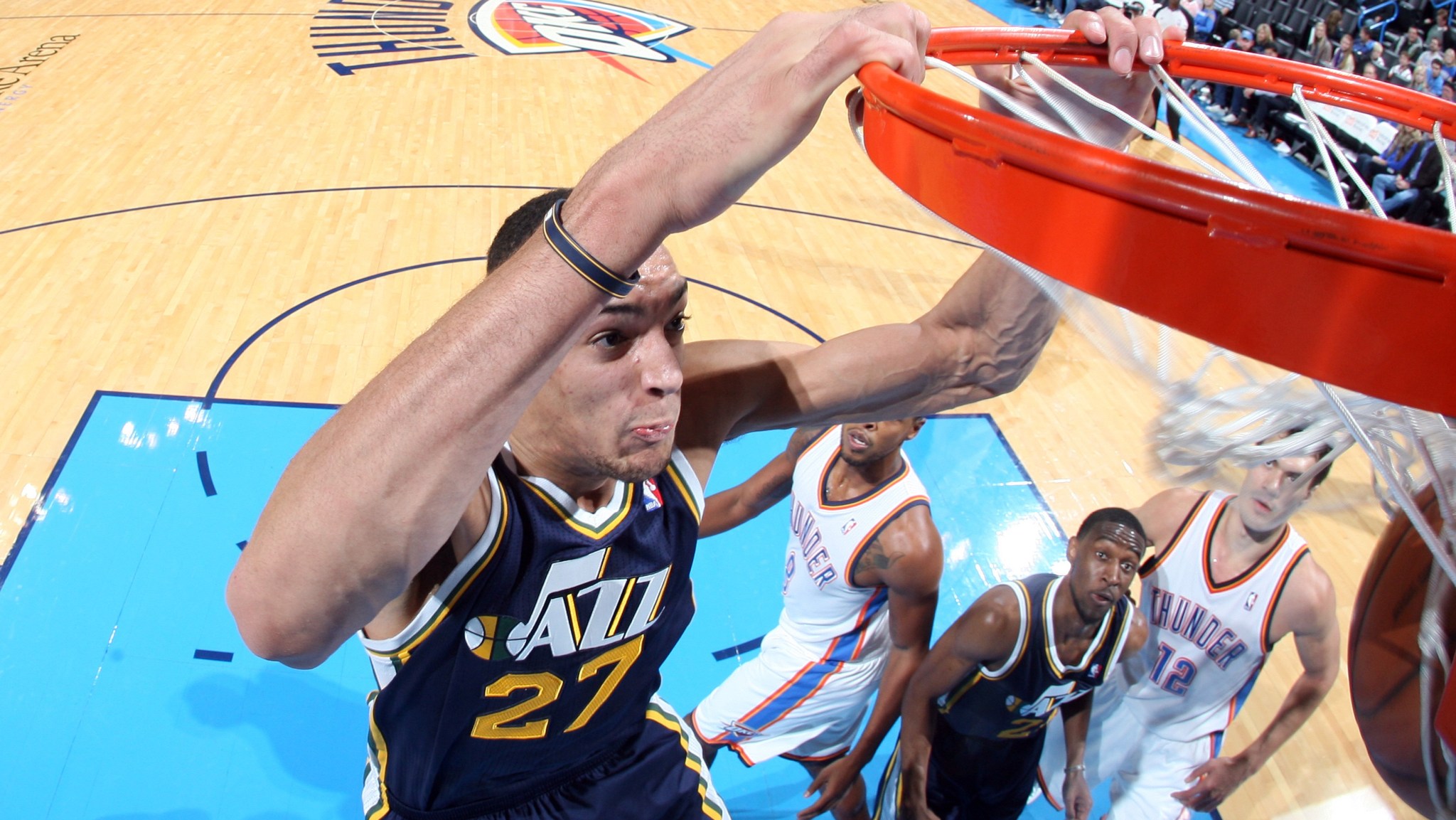 Tyson Chandler has improbably become an archetypal NBA player. There have always been dirty-work big men in the NBA — seven-footers with zero offensive game expected to block shots, rebound, and stay out of the way on offense. Defense comprised almost all of their value.

Chandler would seem to fit that profile. He’s a good defender, sometimes a great one, but he can’t shoot, pass, or post up. And yet, over four combined seasons in New Orleans, Dallas, and New York, Chandler emerged as perhaps the league’s first “unskilled” offensive big man who could work as a major plus on that end by doing only one thing: setting picks, rolling to the hoop, and dunking the ball.

Rule changes that pushed an evolution toward more pick-and-rolls, ball movement, and 3-point shooting coalesced to make Chandler a massively valuable offensive player. His cuts drew defenders from all over the floor — the effect of dribble penetration without a dribble — and opened up shot-up shots, swing passes, and driving lanes. Every raw big that enters the league today gets Chandler as a comparison. DeAndre Jordan might reach peak Tyson Chandler if he continues to hone his defensive skills and manages a mid-career improvement in free throw shooting — an underrated ingredient in Chandler’s rise.

Andre Drummond has to solve his own dire foul shooting issues, but if he does, he might emerge as a superior version of the Chandler prototype. Prime Dwight Howard was the alpha Chandler, especially when Stan Van Gundy’s army of shooters left the lane vacant for him in Orlando, but prime Dwight (correctly, in some matchups) fancied the Chandler archetype beneath any center who wished to be Hakeem Olajuwon.

In related news, there is a monstrously large NBA human shooting 67 percent from the floor in significant minutes for a good team at the FIBA Basketball World Cup, just a month after dunking everything in sight at summer league in Las Vegas.

Rudy Gobert is 7-foot-2, with a wingspan near 7-9, tied for the fourth-largest recorded in the database of NBA prospects at DraftExpress. When he stretches his arm above his head, he can reach up to about 9 feet, 7 inches — tied for the third-largest “standing reach” figure DraftExpress has measured.

Gobert took one shot outside the immediate basket area last season, and he missed it. He dished just seven assists and posted a ghastly turnover rate in the Kendrick Perkins Range of Death. He attempted just 10 post-up shots all season, and the film of his post-up work in the NBA and Europe suggests multiple years living as Olajuwon’s roommate would not transform Gobert into a workable NBA post player — of which there are very few, anyway.

But Gobert is a giant with some mobility. He is not a stiff. He can go from standstill to full speed pretty quickly for a guy his size, and Gobert’s top gear is faster than that of most behemoths. If he sees the threat coming in time, Gobert can zoom from the elbow to the rim and swat away a shot from a driving guard who had no clue Gobert might get there in time. He blocked 7.4 percent of all enemy shots in his paltry 434 minutes last season, a mark that would have led the league had Gobert played enough to qualify for such things. Opposing players shot just 41.2 percent on shots near the rim when Gobert was within five feet of both the basket and the shooter, per SportVU data, identical to such marks for Roy Hibbert and Larry Sanders. Most of Gobert’s minutes came in garbage time or against opposing backups, and the sample size is tiny. But anyone this big, with even moderate mobility, should be able to protect the rim in the NBA.

If Gobert can develop into even 50 percent of peak Chandler on offense, the Jazz will have found something with the 27th pick in the 2013 draft. That is why Gobert’s Chandler impressions in Vegas and Spain are so compelling, even if the competition has been far below NBA standards.

“We have really high hopes for him,” says Dennis Lindsey, the Jazz GM, in Spain to watch Gobert and get to know him better. “The tools Rudy has from a height and length standpoint are obvious, and he really likes basketball. A motivated seven-footer is a good place to start.”

Gobert has been so good over the summer that some Utah fans are wondering what his development might mean for Derrick Favors and Enes Kanter. Favors played a ton of center last season, and he already fits the Chandler archetype. Playing two such guys at once slaughters a team’s spacing; Gobert logged just 71 minutes with Favors last season, per NBA.com.

Utah has hopes for Kanter as a jump-shooter (watch for a corner 3 this season!), but he’s a post-up bully at heart, and he loves to crash the offensive boards. Gobert occupies the same territory and shared the floor with Kanter for just 61 minutes. Hell, Favors and Kanter, the alleged frontcourt of the future in Utah, logged just 773 mostly disastrous minutes together all of last season.

Kanter is eligible for an extension now, and spending a ton on three big men is an unwise allocation of resources. What does Gobert’s summer mean for Kanter?

This is where you apply the brakes. We’re talking about a guy who didn’t even crack 500 minutes as a rookie. The list of seven-footers since 1980 who saw fewer than 500 minutes in their rookie season — there are 117 such guys — basically consists of Rasho Nesterovic, an 18-year-old Andrew Bynum, and 115 stiffs who never amounted to much. That’s an artificial cutoff point, sure, but history is not on Gobert’s side.

He’s 22, so he’s not a baby, either. He shot just 49 percent at the rim last season, a terrible mark for a big man. In good seasons, Chandler has been around 70 percent. Gobert isn’t as fluid an athlete as the Chandler/Jordan/Drummond trio — he’s not as fast or nimble cutting into the paint, and not as naturally smart at finding passing angles for his point guard in the pick-and-roll.

He’s skinny, and struggled to finish through contact when help defenders bodied him up early. Gobert has bulked up, Lindsey says, and the Jazz hope he can dunk over and through guys more often this season. “The biggest difference this summer is that he’s added strength,” Lindsey says. “It has allowed him to complete plays he was just short of completing.”

He’s also setting harder screens for the French team after mostly whiffing on picks last season in a rush to sprint to the rim.

Even so, the guy did do this:

That is just mean. Gobert has flashed the ability to get from the foul line to the rim without a single dribble, and, when necessary, the patience to take one rhythm dribble, gather the ball, and go up with it. And even when he doesn’t get the ball, Gobert’s rolls are already threatening enough to suck in defenders from all over the floor — opening up jumpers and driving chances for his teammates. The Chandler roll is ultimately a selfless act, not usually a scoring one.

The track record is just so limited, and, more importantly for Utah’s future, it’s unclear if the Jazz will ever surround Gobert with the space his game needs to breathe. Chandler’s best seasons came alongside the league’s best point guard in New Orleans (Chris Paul) and with two of the league’s best floor-spacing power forwards in Dirk Nowitzki and then Carmelo Anthony for the Mike Woodson reluctant small-ball Knicks. That is not an accident.

If the lane is crowded, even the best Chandlers find their core skill neutered. Drives from perimeter players peter out before the rim. The Jazz tried to create space for Gobert by playing him with Jeremy Evans, but Evans had only developed a semi-workable midrange shot last season. When Gobert would roll to the rim, he’d most often find a thicket of bodies with bad intentions:

If Gobert rolls while Favors or Kanter is stationed at the elbow, about as far away from the basket as their utility can currently take them, the defenders guarding those players will be on Gobert early.

Gobert doesn’t have to be the roll man, of course. He can camp out along the baseline while Favors works the pick-and-roll, hoping to slip into open space when his defender lurches over to account for Favors. Gobert is a heady cutter with good timing, and he has found chances playing off Boris Diaw’s post game and passing for the French national team.

Here’s an ideal vision of how that might work:

The Jazz could create a hellscape of long-armed defense if they ever developed Favors and Gobert into a workable pair. But it’s just so, so tough. Favors is still a nonthreatening shooter, and smart teams won’t leap out on his pick-and-rolls as the Nuggets did on the above play. Drop every defender back, and the spacing is just too tight.

Super-smart interior passing can overcome the spacing crunch, but the Jazz bigs are early on that learning curve, and even smart big-man tandems struggle to execute tic-tac-toe passing sequences against NBA defenses.

Utah doesn’t have the shooting now to make the Favors/Gobert pairing workable. A Kyle Korver sort would be ideal, zooming off screens from either big man and bending the defense his way, but there aren’t even a half-dozen such players in the league. That’s why the Bulls spent big on draft night to acquire Doug McDermott.

Kanter could develop into useful pick-and-pop shooter — a pseudo power forward to Gobert’s center — but that’s a long-term project. Trevor Booker is a rangier version of Evans, and Steve Novak, acquired from the Raptors in a salary dump, offers a sometimes unplayable brew of infinite spacing and fatal defensive limitations as a small-ball power forward.

There are tricks Quin Snyder can use to manufacture space from nothing — side pick-and-rolls and other play variations — but they can only go so far. Everything we know about Snyder, including his apprenticeships in San Antonio and Atlanta, suggests he wants to maximize spacing and bomb away from deep.

Gobert’s destiny for the Jazz may be as a trade chip, and that’s fine. He’ll have some value as long as he can protect the rim without fouling at a ridiculous rate. He’s still learning the nuances of pick-and-roll defense, which is to be expected for such an inexperienced player. He’s developing his footwork and timing, and learning opposing personnel; dropping back like this against Stephen Curry is death, and puts enormous pressure on Utah’s guards to fight through picks:

But Gobert’s a worker and a thinker. He should get better at the little things, and the big thing — rim protection — is already there.

The odds are against Gobert being able to mimic Chandler’s developmental trajectory on offense. But since the end of last NBA season, he’s flashed some frisky inklings that might indicate otherwise, a turn of events that would be hugely valuable for the Jazz.