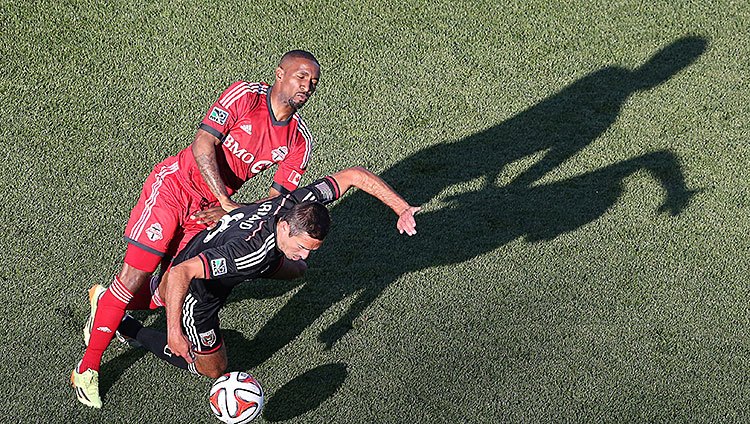 On Monday night, as fans around the world monitored the transfer deadline, waiting to see if Radamel Falcao was indeed going to be stripped for parts to make two good knees for Robin van Persie, Tim Bezbatchenko was holding a teleconference.

If you don’t know who Tim Bezbatchenko is, he’s one of the people left standing after the smoke cleared in one of the more turbulent weeks in Toronto FC’s short and, well, turbulent history. Bezbatchenko, the general manager of Toronto — whose public war (or skirmish) of words with head coach Ryan Nelsen ended with Nelsen and his coaching staff departing, after a 3-0 home defeat to New England on Saturday night — had called the teleconference to announce that Jermain Defoe, despite record-breaking offers, would be staying with the team as the transfer window closed.

Defoe signed for Toronto in January, along with then-darling of the USMNT Michael Bradley, following a series of video teasers featuring Londoners spitting out their tea and the tagline “It’s a Bloody Big Deal.” And it was — an England international and an American hero both coming not just to MLS, but to a team that had never made the playoffs.

Earlier Monday, the rumor was that Defoe, conveniently in England for a second opinion on a recurring injury, would be rejoining his old boss Harry Redknapp at Queens Park Rangers. The story came hard on the heels of Nelsen’s firing and the announced departure, next year, of Tim Leiweke, the garrulous president and CEO of Maple Leaf Sports and Entertainment (Toronto’s owners) — the man who had sanctioned the big-money signings in the first place.

Of the three potential departures, the gut reaction was that Leiweke’s might have the biggest impact. Since starting with two goals in a high-profile opening day victory at Seattle, Defoe had been only intermittently effective. His finishing was excellent in patches, but he’d been hindered by injuries. Nelsen, meanwhile, who’d arrived under a brief previous regime, was always going to be vulnerable when results dipped, as they have in a run of three wins in 13 games. Lately, he appeared to have succumbed to a long-standing tradition among Toronto coaches: trying not to lose, rather than expecting to win.

Leiweke is a man who expects to win. Sometimes unreasonably so. He’s the man who, in his time at AEG, persuaded David Beckham to sign with the L.A. Galaxy, and who proclaimed upon Beckham’s unveiling that the superstar would “have a greater impact on soccer in America than any athlete has ever had on a sport globally.” After moving to MLSE, Leiweke was tasked with galvanizing not just the soccer team, but also the other moribund Toronto properties of the Maple Leafs — the Raptors and Marlies — and he continued to indulge his penchant for grand statements.

There he was in January, at the press conference for Defoe and Bradley, quoting Robert Kennedy’s “Why not?” speech and blithely acknowledging that “to do one DP (designated player) is a smart move, to do two DPs is not the smartest thing ever done and to do three [Brazilian Gilberto had also signed] is financial suicide.”

Leiweke was acknowledging the skepticism his moves had generated among the partners of MLS, not to mention their fears that his inflated prices would distort a market in which GMs already had little room to maneuver. But he also insisted that, in the global football economy his team was now operating in, the scale of the deals was not as excessive as it might appear.

Barely eight months after all of his dramatic talk about the necessity of taking drastic action because the “patient was dying,” Leiweke announced last month that he was departing to pursue an entrepreneurial dream.

He didn’t announce it on a battleship in front of a “Mission Accomplished” banner, but that gives you some sense of the timing. And that’s where the gut reaction about his departure comes in.

Had only Nelsen left, or had Toronto also decided the Defoe deal was too good to turn down, even so soon after his much-heralded arrival, it might have seemed like a “Toronto as usual” speed bump. But there would still be a narrative that could be held together by Leiweke’s ability to describe not just one glass as half full, but millions of them (possibly forming a fountain).

That the cheerful architect of “financial suicide” was leaving meant the instability of the subsequent week would have to be seen in the context of his announcement. So when Bezbatchenko made his media pitch Monday evening, in which he essentially suggested that entertaining the bids for Defoe proved Toronto was a big club now, it felt like positive spin on a bloody big mess.

It’s not yet a bloody big mess of a season, though. Perhaps because of the Eastern Conference opposition’s failure to take advantage of the team’s recent form, Toronto is still in a playoff spot. There’s a fair argument that the squad generally is better than it has been for some time, and that the long-haul project might well still be on target. There’s an argument, too, that new coach Greg Vanney might just give the team the boost to get over the line in the playoff race (dreams of dominating the league having long since been suitably adjusted for this year), while Nelsen’s inability to work out a midfield solution that got the most out of Michael Bradley, amid other tactical and personnel miscues, was always likely to leave them short.

And Toronto fans and apologists for the current project can still make a fair case that they should not be judged by their history, and that this week’s apparent wave of would-be abandonments and bloodletting is not a part of the club’s historical sinkhole of fortune. The trouble is, so early in the bid to shed that history, and with little but promise to show for it yet, a week like this past one looks like a very familiar mess.

Wingspan and a Prayer: Trying to Decipher the Massive Promise of Utah's Rudy Gobert