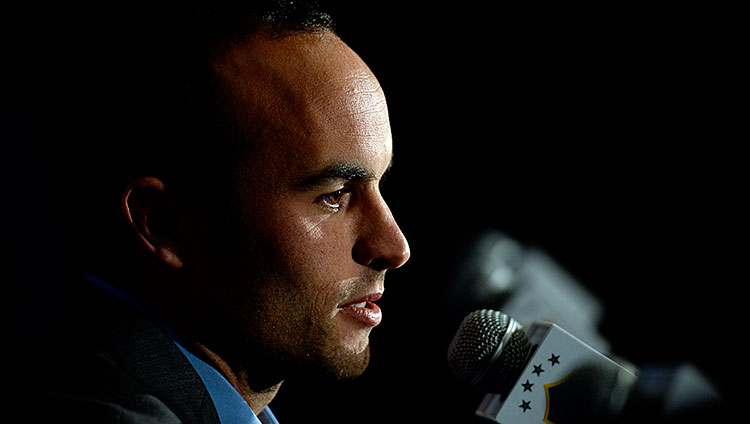 Say what you want about Landon Donovan, but the man knows how to time a run. There he was, in his 23-minute cameo for the MLS All-Stars on Wednesday night, peeling off his marker to control and score the winner from a Diego Valeri cross before sprinting away to celebrate, greeted by an oddly cathartic roar for a goal in a friendly — even one against Bayern Munich.

And now we know why. His 14th All-Star appearance was Donovan’s last. After coming off the field, pausing to pick up his MVP award, Donovan was on his way back to L.A., where he announced he will retire at the end of the season.

After the furor about how his much-publicized sabbatical from the game was handled, replete with introspective, somewhat maudlin TV interviews, Donovan’s announcement of his final departure was discreet, and even generous.

With most of the attention being paid to Thierry Henry, also likely playing his last All-Star Game, Donovan had been a very low-key presence throughout All-Star week. Compared to his usual prominence during the All-Star circus, Donovan had been a portrait of discretion, no more visible than, say, DeAndre Yedlin.

Donovan was subbed into the game for Henry, with the latter drawing a sentimental, stadiumwide round of applause that covered whatever might have been saved for the American’s entrance. Donovan was then subbed out in the wake of his goal. There was little inkling of what was to follow — most speculation about the hastily arranged Galaxy press conference Thursday centered on the possibility of Sacha Kljestan being signed.

Yet, as the news sank in, it somehow all felt fairly apt. With Donovan bypassed for a World Cup spot, and having spent the last couple of years publicly wrestling with his own appetite for the game, his refusal to hijack All-Star week was consistent with a man who’s ready to move on. He may not have taken the bow in Portland, but I hope we now get the requisite Jeter-esque acknowledgement of Donovan’s significance in the games that remain for him. He deserves it.

Donovan’s tenure in MLS has spanned an epoch. Footage of his 14 All-Star Games alone is telling. From high-scoring East-West kickabouts played on fields marked for American football to lucrative, not-quite-a-referendum games against big European teams in dedicated soccer stadiums, Donovan’s career took place as the modern domestic game has evolved. And his continual presence throughout that history has helped give that evolution a sense of coherence and, at crucial low points, credibility.

Considering his legacy properly is for another day, though. For now, Donovan has arrived on the blind side one more time.