The B.S. Report: Michael B. Jordan 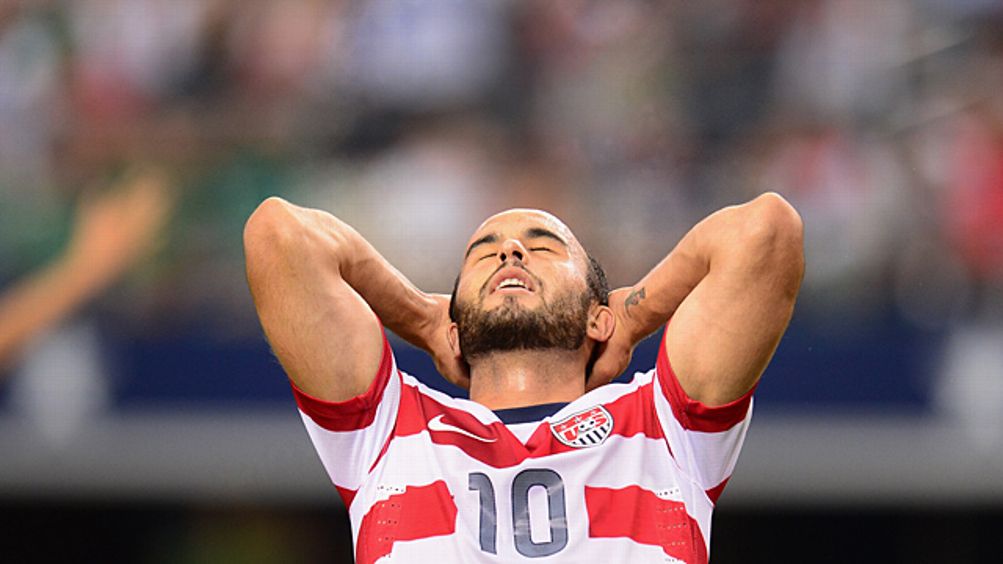 There’s this Felt song called “I Will Die With My Head in Flames” that I sometimes think of when I think of Landon Donovan. Not because he’d like it — it’s existential mid-’80s jangle-pop, and his taste trends more toward SUV-Bluetooth music, or whatever you want to call the Venn diagram intersection that includes both T.I. and the Fray.1 A certain type of SoCal white-dude uncoolness has become as central to his image as his rank as the all-time leading scorer for the U.S. men’s national soccer team; if you doubt this, please examine the covers of the first two 9-and-up children’s biographies to answer an Amazon search for his name. There’s Landon Donovan: World-Class Soccer Star, part of Robbie Readers’ “No Hands Allowed” series, which shows a sweaty and dumbstruck-looking Donovan peering out of a blue letterbox with an expression that says “I never thought my best friend would total my Jeep.” And then there’s World’s Greatest Athletes: Landon Donovan, on which a Photoshop cutout of Donovan with the contrast jacked way up is unconvincingly triumph-roaring in front of a psychedelic prism-spray that Phish once borrowed from Widespread Panic on the way to Burning Man. Apart from maybe this infamous piece of drinking-fountain erotica that ran in 2002 in the New York Times Magazine, are there any more perfect representations of how Donovan is generally perceived?

The reason I think of “I Will Die With My Head in Flames” when I watch Landon Donovan is simply that he often seems like he is — inwardly, while you look at him — dying with his head in flames. There’s a reserve about him, a kind of massive carefulness, that seems to conceal a desperation. In postmatch interviews, you’ll occasionally catch him looking so self-conscious that he’s almost paralyzed. Whenever that happens, I can’t help picturing tiny soccer players running around on a tiny pitch inside his head, waving tiny arms, torches from the neck up.

Some of this probably comes down to a justified mistrust. Donovan has never had the easiest relationship with American fans, and he’s been singed often enough by the media to lose faith in anyone’s motives. When he came back from Bayer Leverkusen in 2001 to play for the San Jose Earthquakes, he was ripped for being soft (because American players could only develop their potential if they learned the game in Europe).2 When he left San Jose to join the L.A. Galaxy in 2005, he was ripped for being a traitor. When his form dips, he gets ripped for not doing what it takes to play better, but when he took a four-month break from the game to combat burnout starting in late 2012, he was ripped for self-indulgence. All he’s done since 2001, by the way, is win five MLS championships and three CONCACAF Gold Cups (with a fourth one possible on Sunday, largely thanks to him), lead an overall renaissance of both the national team and domestic soccer, and score the most iconic goal in American soccer history. You wouldn’t get sick of being called “Landycakes”?

Well, the celebrity who’s uncomfortable with fame is an easy cliché at this point, but with Donovan it goes deeper than that. He seems quietly paranoid, not just about the attention he receives for being so talented, but about his talent, too. His whole career he’s been haunted by some basic doubt or allergy he’s felt toward his career itself, which makes him more interesting than he’s sometimes given credit for: How many great athletes just decide to take four months off?3 On Wednesday, after his two-goal performance led the U.S. to a 3-1 win over Honduras in the Gold Cup semifinals, he was asked how much he’s been enjoying soccer since the sabbatical ended. He’s been playing brilliantly pretty much since his return. He replied, “As much as I ever have,” which you could take in two ways.

Every once in a while, this will happen: A major sport will generate some extremely skilled player who, for one reason or another, feels uneasy about the whole chaos-discipline complex of professional athletics and never fully embraces the role of superstar. Donovan’s far from the most extreme case of this — Andre Agassi hit lower lows and was more open about not liking (or not always liking) tennis; Ricky Williams fought tougher psychological demons. But was there ever an athlete who defined his sport more than Donovan has in America over the past 10 years while simultaneously being less at home playing it? Not since Kareem, if even then.

I was thrown into the lion’s den

I did not care what happened

Can’t you see it’s all the same

That’s why I’ll die with my head in flames

Arrogant psychopaths always play better on TV than thoughtful people, because once a person is objectified enough, self-consciousness becomes ridiculous. There’s nothing more embarrassing than a celebrity who thinks. Viral clips like Russell Brand’s epic vaporization of the Morning Joe roundtable on MSNBC are so delightful because they turn the usual state of things upside down for a minute — the usual state of things being that Bill O’Reilly would crush Socrates in a debate as long as they held it on camera.

Donovan signed his first professional soccer contract in 1999, when he was 17. Almost ever since then, this strange dynamic has existed whereby (a) he has let his career be informed by his own sense of uncertainty rather than valuing achievement over everything else; (b) U.S. soccer fans have looked to him as a savior figure; (c) he has made choices that were right for him in the moment rather than worked single-mindedly toward his legacy; (d) those choices have, to an almost uncanny degree, put him in conflict with the desires of American soccer fans as contained in (b).

This last point can’t be emphasized enough. If there’s a crowning irony in American soccer during the MLS era, it’s that we were finally given a superstar, something we always wanted — only the superstar managed to embody almost everything about U.S. soccer culture that we were trying to escape. Soccer was seen as a soft, unmanly sport, a sort of dainty French teatime exercise for socialists, and our superstar made major career moves out of homesickness. Soccer was seen4 as hopelessly white-bread and suburban, forever entangled with minivans and juice boxes and parents with folding chairs, and our superstar was a white kid from the Inland Empire who looked like Dave Matthews and dressed like someone who owned Dave Matthews CDs. Soccer was seen as an electromagnet for faux-intellectual Europhiles and poseurs; here is an interview from May in which Donovan talks about how much he likes reading Rilke.

That interview is instructive, because Donovan is talking about how much better he’s felt since his extended break from the game, but … well, try to imagine Derek Jeter saying any of this:

We live in a world where we want everything to be happy to such an extent we are willing to ignore sadness and pretend all is good … Conventional wisdom would say, “No, you have a contract, you show up January 20th for training camp” — but I realized that was not right for me and I had to be in control of my life. If you forget that, you can get lost forever …. I feel blessed that I had the self-awareness to say, “Something is not working here.” I was a little overwhelmed at the time, and I knew if I did not stop it would not be good for anybody.

Or imagine Mike Ditka’s face reading the transcript of Donovan’s comments to reporters after his return from the sabbatical:

As it happens, I agree with all of this. When I said so on Twitter back in March, I heard from a lot of like-minded people, but also from a lot of critics typing in shouty talk-radio voices who all shared some variant of either “he turned his back on America; he should never play again” or “why should some pampered athlete get to care for his own mental health when regular people have to go to work every Monday”5 — which, great logic, dude with a boat behind you in your avatar photo. Michael Jordan would crush Socrates in a debate, as long as they held it on camera.

So, I mean, not to sound too un–Jim Rome here, but at what point do we let humanity back into sports discourse? Isn’t it possible to get fed up with robotronic superstars who “control the narrative,” meaning warp their whole personas to fit some moistly goateed blood-pressure addict’s notion of how to overcompensate for masculine insecurity? Landon Donovan will never win over the guy who wants soulless cadet-destroyers trampling his favorite sports grass. He is maybe the least laser-sound-effect-friendly fast person in the history of professional athletics. But sadness is a thing people feel. Homesickness is a thing people feel. People are mostly uncool and prone to listen to terrible pop music. People get depressed. It’s normal to make decisions based on this stuff. I can barely look up what channel a match is on without browsing past three websites that make me feel like my brain is quietly disintegrating; no athlete owes it to me to make himself crazy doing his job.

Not that the results are the only thing justifying the decision, but Landon Donovan took four months off, and now he has seven goals and nine assists in his last six international matches. I don’t know whether he loves playing soccer, but the thing about talent like his is that you don’t get to decide who possesses it, not even if you’re him. He may not have been the superstar we wanted. He’s the superstar we got. And that’s fine.