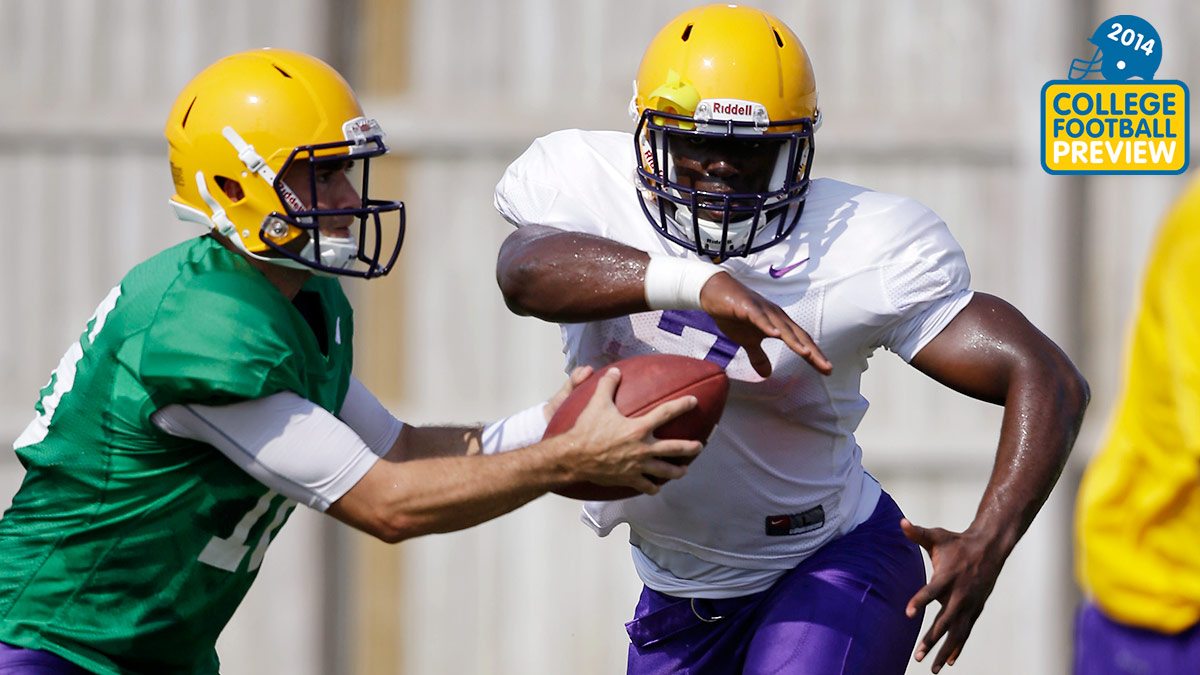 Freshman year is a time for fake IDs, shared bathrooms, general experimentation, and, if the past two college football seasons are any indication, Heisman Trophies. The 2012 CFB season was Johnny Manziel’s coming-out party (with a heavy emphasis on “party”), while 2013 was all about Jameis Winston’s aerial rampage through the ACC. Sure, both quarterbacks were redshirt freshmen and not true freshmen, but to dwell on that is to miss the point. Fact is, they were freshmen on the field, and they’re the only first-year players to win the Heisman in the award’s 78-year history, representing a sea change for the historically ageist sport.

In January, 98 underclassmen declared for the NFL draft, shattering last year’s record of 73. That number has nearly doubled since 2010, and we’ve tellingly reached a point when redshirt sophomores are often regarded primarily as draft prospects. The extension of this is a ballooning youth movement for the sport: With so many early departures, there are more opportunities than ever for freshmen to gain starting jobs across the country, and many of them are succeeding after they do. Consequently, it’s become imperative for the discerning fan to begin each season with a firm grasp on the nation’s most ballyhooed newbies, which is exactly what you’ll gain by reading this column. Onward!

If Heismans were awarded solely based on preseason hype, LSU’s true freshman running back would’ve locked that bad boy up in February. The New Orleans native, whose TOTALLY NOT OUTRAGEOUS freshman year plans include winning the Heisman and a national championship, was the undisputed king of the 2014 recruiting class, and he’s already been called “otherworldly,” “the most highly touted LSU signee of all-time,” and, courtesy of Tyrann Mathieu, “a grown man … in the eighth grade.” It’s understandable to balk at the Adrian Peterson comparisons, which have been invoked ad nauseam, but they happen to be uncannily accurate. Just peep Fournette’s high school highlight reel, which led to a great deal of astonishment and drooling upon my first viewing.

As if being compared to Peterson weren’t enough, Fournette has also blithely been likened to Michael Jordan by coach Les Miles at last month’s SEC media days. Miles cited their shared “quiet confidence,” among other greatness-conferring traits, and the really crazy part is that nobody seemed to bat an eye; most people treated the comments as the most sensible to ever come out of Miles’s mouth. Evidently, Fournette will disappoint a lot of people (a whole nation of them, actually) if he doesn’t rush for 2,000 yards, score 30 touchdowns, and simultaneously evoke 1988 Barry Sanders, 1996 Ron Dayne, and 2005 Reggie Bush this season. That’s some extreme pressure, but if anyone has the ability to handle it, it’s Fournette.

Replacing the phenomenon that was Johnny Football would be an impossibly difficult task for anyone, let alone an 18-year-old whose playing style doesn’t remotely resemble Manziel’s. But, that caveat aside, it’d be unwise to underestimate A&M’s new quarterback: Allen was the class of 2014’s top-ranked pocket passer for a reason, and the early reviews from camp have been effusive, praising his sound mechanics and savvy decision-making. As such, even if sophomore Kenny Hill manages to win the starting job, it’s probably only a matter of time before Allen takes over. Moreover, I’m pretty sure Kevin Sumlin could turn a ham sandwich into the nation’s most prolific passer, so there’s no telling what he’ll do with someone of Allen’s caliber. And of course it doesn’t hurt that, despite Mike Evans’s NFL departure, the Aggies’ receiving corps is brimming with top-flight talent, including:

Meet said talent! Checking in at 6-foot-5 and 225 pounds of pure granite, Seals-Jones was biologically engineered to stunt on defensive backs, making him a veritable Evans clone. The Aggies faithful got a brief taste of Seals-Jones’s inhuman skill set when Matt Joeckel hooked up with him for a 71-yard touchdown in last year’s opener against Rice; unfortunately, Seals-Jones injured his knee on the same play, leading to season-ending surgery and a redshirt season. It’s a real shame that he never got to play with Manziel,1 but at least his medical redshirt allows him to catch passes from Allen for the next four years … or until he leaves for the NFL draft after next season.

Meanwhile, the darling of A&M’s offseason was true freshman Speedy Noil, who was destined to play wide receiver upon the completion of his birth certificate.2 Speedy creates separation from defenders with ease, yet still plays with a jarring physicality. Senior receiver Malcome Kennedy deemed him “a beast man” in March, likely due to Speedy’s brutalization of sophomore cornerback Tavares Garner in the Oklahoma drill:

The Ricky-Speedy Cornerback Destruction Tour kicks off two weeks from today in Columbia. Get your popcorn ready.

Welcome to the Dave Clawson era at Wake Forest, where a quarterback competition is nothing but a meritocracy. Somewhat surprisingly, Clawson announced this week that true freshman Wolford had beaten out redshirt sophomore Tyler Cameron and redshirt junior Kevin Sousa for the starting job, at which point I Googled “John Wolford” and conclusively identified him as the next Tim Tebow. Apparently, Wolford owns a number of Florida high school records, including career passing yards and all-purpose touchdowns. Impressive stuff, to be sure, but not nearly as impressive as his senior year mixtape.

What it lacks in background music it makes up for in improbable runs and unbelievably precise touchdown passes. Wolford’s Week 3 showdown with Utah State’s Chuckie Keeton can’t arrive soon enough.

Although Nick Saban continually refuses to acknowledge the possibility that someone might win Alabama’s quarterback derby, he’s already handed the left tackle job to true freshman Robinson. Based on reports out of summer practice, this appears to be a smart call. As Cyrus Kouandjio’s replacement, Robinson will have some big-ass shoes to fill; good thing he stands at a towering 6-foot-6 and 320 pounds! On size alone, he’s earned the right to be the Tide’s first true freshman offensive starter since Julio Jones in 2008, as well as the first true freshman to start at left tackle in the Saban era. As I noted in my Signing Day primer this winter, expect Robinson to play the position like a one-dimensional breakfast chef, making pancakes, pancakes, and more pancakes.

Having seen action in four games last year before a shoulder injury forced him to take a medical redshirt, outside linebacker Thomas is kind of like that freshman who spent the majority of his high school weekends visiting friends in college, racking up invaluable experience in the process. The former five-star recruit reportedly turned heads in spring practice and added “20 pounds of muscle” since last fall, which’ll come in handy with former FSU tackling machines Christian Jones and Telvin Smith off to the NFL. As for the Noles’ class of true freshmen, well … I’ll leave you with their collaborative rap video. It’s not super-encouraging.

We’ve already marveled at his jaw-dropping bodily transformation; now it’s time to figure out how the freshman cornerback’s recently developed six-pack will help Michigan avoid another six-loss season. Since Peppers has already mastered Greg Mattison’s defense, the obvious answer here is to use him on offense, which is something head coach Brady Hoke has legitimately hinted at. While this subplot is certainly intriguing, Peppers’s primary role will be to neutralize the opposition’s top wideout and return a punt to the house from time to time, just as he did in high school. It’s only natural, then, for comparisons to Wolverines legend Charles Woodson to crop up, and despite Peppers’s understandable protestations, he’ll have to pretty much validate that hype in order to be considered a success.

Alexander suffered a preseason groin injury last year, forcing him to take an unexpected redshirt. In retrospect, this wasn’t such a terrible thing. Without it, he would’ve wasted a year of eligibility playing only sparingly behind the since-departed Bashaud Breeland and Darius Robinson, and it’s not like Alexander’s superb nickel coverage skills could’ve single-handedly swung the result of the Florida State game anyway. Regardless, the former five-star recruit clearly made good use of his extended offseason. He’s already holding down a starting job despite the defensive backfield’s relative experience, and Tigers defensive coordinator Brent Venables has been gushing over his practice performance. All that’s left for him to do is beat Dabo Swinney at pool, which is the true mark of athletic greatness at Clemson.

The class of 2013’s top two quarterbacks, Penn State’s Christian Hackenberg and USC’s Browne, seemed to enter into similar situations last year, both choosing flagship programs that were offensively minded and depth-challenged. While the strategy paid off for Hackenberg, Browne ended up taking a redshirt and has yet to supplant redshirt junior Cody Kessler on the depth chart. However, I included him here because USC plays a cupcake-free schedule and has a generally rough go of it early on, which increases the likelihood of Kessler struggling out of the gate. If that happens, it’ll be damn near impossible for Steve Sarkisian to let Browne languish on the bench, especially considering the T-word murmurs that popped up in April. Plus, if you remember, Kessler once lost to Max Wittek in an open competition to be Matt Barkley’s backup, so his upside is clearly limited. In with the new, I always say.

About Last Night: Fear the Royals