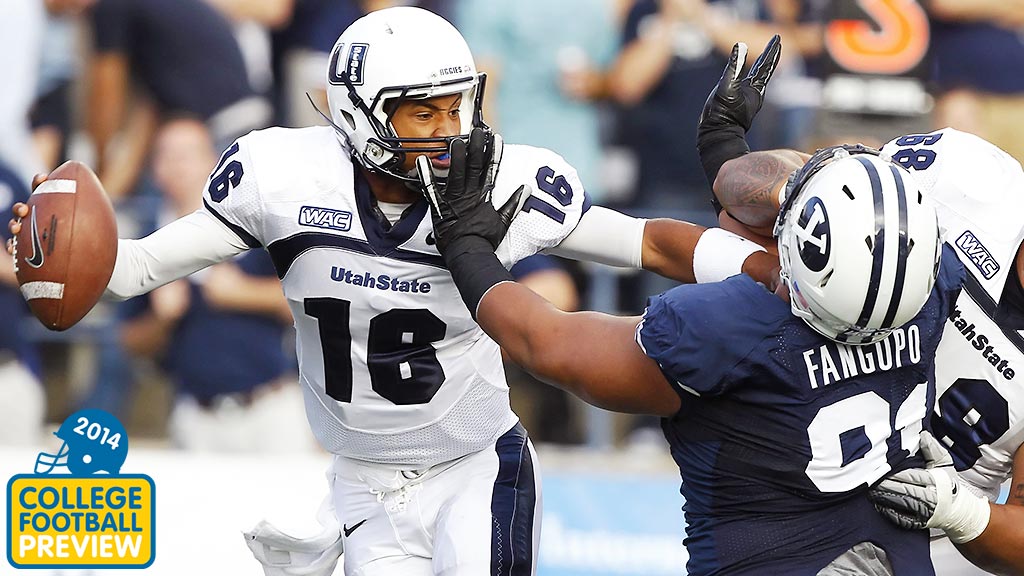 You don’t need another reason to foam at the mouth in anticipation of the coming college football season, but here’s one anyway: Chuckie Keeton’s back.

We know exactly where we were when the Utah State quarterback skittered into our lives. It was the first Saturday of the 2011 season, and Boise State was set to meet Georgia in Atlanta in a game that wouldn’t start until close to dark. It was midafternoon, and we were elbowing for space under a tailgate tent on a broiling asphalt lot outside the Georgia Dome, wearing thoroughly impractical boots for the ensuing hike over to the stadium, and the Aggies’ true freshman quarterback was scaring the hell out of the defending national champions.

Auburn put the game away with a last-minute Michael Dyer run, and later Boise State blurred smoothly past the Bulldogs, and we all went on with our lives. Keeton, meanwhile, went on to amass 1,200 passing yards, 293 yards rushing, and 15 total touchdowns before a stinger scare versus Hawaii knocked him out of the game and out of the starting slot.

Keeton reclaimed his position prior to the start of the 2012 season, and his record-breaking sophomore campaign was a thing of delight, featuring 3,992 yards of total offense and culminating in the Aggies’ second straight Famous Idaho Potato Bowl victory:

In 2013, we were robbed of his presence again, and so, so early. The season wasn’t even half over when Keeton, who already had 1,388 yards, 18 touchdowns, and just two picks on 196 attempted passes, tore his ACL and MCL in the first quarter of play against BYU. The Aggies weren’t built as a one-man outfit last year and were particularly skilled on defense, and the team did well in Keeton’s absence, going 9-5 and taking the division before losing to Fresno State in the first Mountain West championship game, then beating Northern Illinois in the Poinsettia Bowl. But when you see a guy like Keeton, who’s so obviously a natural-born cheat code, you want as many chances as you can get to mash all the buttons and see what he can do.

There’s only a season’s worth of chances left to see this kid play, and two of the early ones come on widely available channels: The Aggies open 2014 at Tennessee in the Sunday-night SEC Network slot, then host Wake Forest in Week 3 on CBSSN.

Keeton’s back in camp now, and he’s looking well. Here, watch him taking cuts in practice and get happy: