Grantland on Your Side: Adopt a 2014 College Football Team! 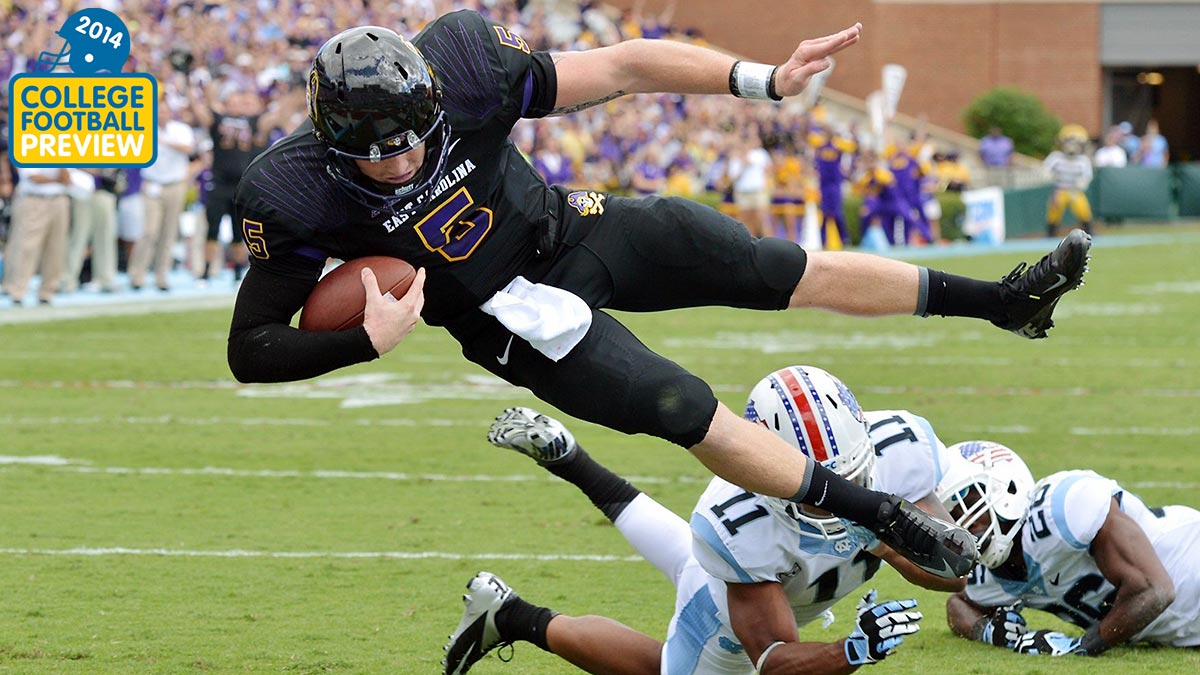 The time remaining until the onset of the 2014 college football season can now be measured easily in hours, and still your heart feels less than full. Maybe you’re a Midwestern diehard looking to occupy the hours after your beloved noon games have come and gone. Maybe your alma mater is mired in a never-ending rebuilding cycle of such miserable duration that you’ve decided to look to a new program to meet your emotional needs in the interim. Maybe you’ve never really been into the sport at all, but are finding it increasingly difficult to conduct a normal human existence without greeting everyone you meet with a hearty “ROLL TIDE,” without heed to affiliation. You need to take on a new cheering interest, and you need to do it without looking like the worst person on the planet. The Grantland on Your Side help line is here for you. You tell us who you are; we give you what you want. Let’s go to the request line:

Caller, you’ll want to look for something in a nice Ball State cardinal. These redbirds reside squarely within the Platonic ideal of preseason bandwagoning: They’re a very good team (10 wins in 2013, second-place finish in the MAC West division) with just enough dings entering 2014 (a narrow bowl loss to Arkansas State, war machine quarterback Keith Wenning’s departure) to keep you from looking like a complete asshole while hitching your emotional wagon to the team now, and they’re finished with a veneer of now-or-never intrigue (how much longer can the team hope to hang on to hotshot coach Pete Lembo?). Any dropped feathers can be readily disposed of with a hand brush and dustpan. Get an early look in Week 2 when the Cardinals visit Iowa (ESPN2/WatchESPN).

@HollyAnderson A mid-major that isn't from the MAC with a high-scoring offense and no defense.

This exact combination is harder to find than you might think, but if you’re willing to accept more defense in exchange for an extra-MACrital #MACtion feeling, our ball sommelier recommends the East Carolina Pirates to pretty much everybody who comes asking these days. With three chances to knock off power-conference teams in September alone — at no. 9 South Carolina in Week 2 (ESPN2/ESPNU), at Virginia Tech in Week 3 (ABC), and versus no. 23 North Carolina in Week 4 — a pinball wizard of a quarterback in Shane Carden, and a terribly underrated screaming mean fan base, ECU is our highest-rated all-around bandwagon pick for 2014.

Plenty of good seats are available at all times for the Georgia State Panthers, a team we desperately want to see start marketing itself as “Atlanta’s College Football Team,” just to see what happens. GSU fans will also find themselves more immediately gratified than partisans of any other team: The Panthers open the FBS season tonight, hosting Abilene Christian in the Georgia Dome (ESPNU/WatchESPN). Think of Atlanta’s College Football Team as the one present you’re allowed to open on Christmas Eve.

@HollyAnderson I’m looking for something in a Sun Belt, but not in-state

With the Warhawks and Ragin’ Cajuns eliminated by virtue of Pelican State borders, the discerning denizen of Red Stick can introduce a little variety into his or her diet by offsetting the resource-rich Bayou Bengals (first game: 1893) with an increased intake of the South Alabama Jaguars (first game: 2009). Savor the tart flavors of new growth and admirable moxie: The Jaguars are five years old and finished last season in the top half of their conference. USA (USA!) opens the season at Kent State in Week 2 (ESPN3).

Why a Notre Dame fan would want more of this kind of thing, we cannot fathom, but we’re not here to judge your proclivities, so ask yourself: Have you considered the no. 4 Oklahoma Sooners for your needs? Last year’s team got deep-fried in Texas and mauled 41-12 by eventual conference champ Baylor … only to beat Alabama in the Sugar Bowl. The 2014 batch could compete for a national title, or again fall short of even a conference championship. Either way, it’ll be appointment viewing; the November schedule for the Big 12’s best-regarded teams will be one of the year’s most enticing blocks of television. (See the Sooners on national TV beginning with Tulsa in Week 2 [ABC/ESPN] and Tennessee in Week 3 [ABC].)

@HollyAnderson I need a west coast team that doesn't act almighty. With an awesome punter and/or safety. Preferably orange but not required.

Done and done: the Oregon State Beavers and Keith Kostol. The Beavers host Portland State on the Pac-12 Network in Week 1, followed by a late game at Hawaii in Week 2 (CBSSN).

For you, dear reader, we present the no. 15 USC Trojans. Their last coach was fired in an airport parking lot in the middle of the night. A roster thinned by NCAA sanctions but still overwhelmingly populated by four- and five-star players, under a first-year head coach, could conceivably find itself upset by a plucky Fresno State squad in Week 1 (Fox), plowed over by Stanford in Week 2 (ABC/ESPN3), and then winning the next eight in a row before going 1-1 against UCLA and Notre Dame to close out the season. And if you say you can’t see Steve Sarkisian staring grimly into a camera and intoning, “I’m from Buenos Aires, and I say kill ’em all,” you’re only lying to yourself.

At the risk of hexing them merely by looking directly at them: If the Maryland Terrapins can stay healthy, that’s who you want. The Terps will have two stellar receiving talents in Stefon Diggs and Deon Long, both of whom are returning from broken legs sustained in the same 2013 game. As a whole, the entire state may be a better fit for the Big Ten than we initially imagined:

If you get the Big Ten Network, you can get your first look at the Terps when they host James Madison in Week 1; if not, hold out for Week 2 at South Florida on CBSSN.

@HollyAnderson very curious about the bizarre criteria that leads one to adopting Idaho.

Our research shows that the Idaho Vandals are the ideal team of agoraphobics, who will find comfort both in the cozy confines of the Kibbie Dome (seating capacity: 15,200) and in the surrounding environs of the Palouse, where rolling hills and low clouds combine to form an almost snuggly atmosphere. Idaho’s first home game comes in Week 3 versus Western Michigan (ESPN3).

@HollyAnderson Do you have anything in an after dinner team? Something to settle the stomach before bed, preferably

The first and last word in after-dinner football remains the Hawaii Warriors, with eight kickoffs scheduled at or after 10:30 p.m. ET. The somewhat acrid edge of Norm Chow’s pass-happy offense is blunted by frequent losses, making for an overall effect of soothing delirium, an able lullaby but never a soporific. See the Warriors in back-to-back late-night appearances on CBSSN in Weeks 1 and 2, hosting no. 25 Washington followed by Oregon State.

@HollyAnderson just realized with a start that I forgot which college football team I now like. It was LSU, right? Kthx.

If it wasn’t already, it should be the no. 13 LSU Tigers going forward, as a general rule. On TV everywhere, all the time, beginning with this Saturday’s neutral-site contest versus no. 14 Wisconsin on ESPN. A typical visitor to a Baton Rouge tailgate will have his or her breeding, grooming, occupation, and alma mater raked over a brazier of an astonishing variety of insults within the space of a single afternoon, while simultaneously being plied with at least four strains of gumbo. It’s the human condition, cooked in cast iron and served hot over dirty rice.