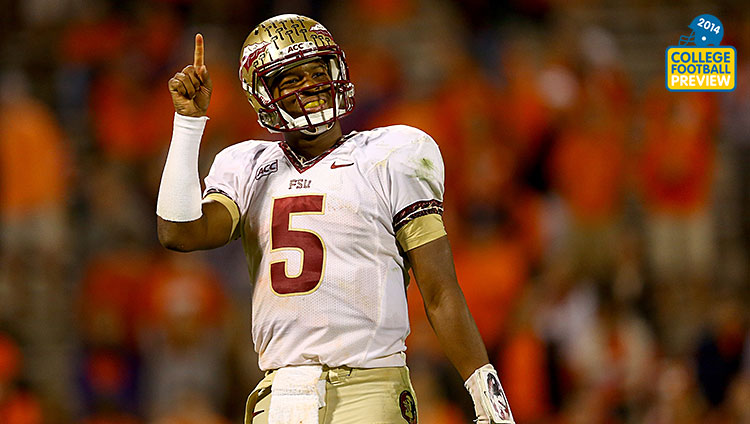 Time to get “Shameless for Jameis.” There’s really nowhere else to start. Watching the four expected first-round quarterbacks jostle for position this season is going to be fascinating. The group of Jameis Winston, Marcus Mariota, Bryce Petty, and Brett Hundley will have a snappy nickname by October 1. Mark it down. That’s also about when the NFL’s no. 1 pick race should heat up.

My early guess is that the same thing will happen to this group that happens to most quarterback classes between early August and the draft: One guy separates himself, while another falls out of the group completely. It’s good to remember that Brian Brohm and Matt Barkley were both supposed to be the first overall pick at one point — Teddy Bridgewater too.

It’s way early, but right now, the competition for that no. 1 spot seems to be between Winston and Mariota. It really depends on what you’re looking for. Winston is 235 pounds of quarterback prototype, with the arm strength and touch to match. Mariota is a dual threat, closer to Colin Kaepernick — less polished, but possibly more terrifying.

The way the entire group shakes out might depend on who does the best job erasing doubts about whatever flaws he might have. For Winston, it’s shortening up his looooong delivery. Mariota needs to show improvement as a dropback passer. Petty has to overcome the stigma of being a cog in Baylor’s offensive machine. And Hundley needs to prove he can be consistently reliable.

Ifo (I’m only ever referring to him as Ifo; I think we all have to) probably would have gone in the first round this year, but going back to Oregon has made him the early favorite among cornerbacks for 2015. I’m totally onboard.

The first clip in that video is Ifo body-slamming Saints first-round pick Brandin Cooks. More than one of these plays is against Cooks, including one when Ifo stonewalls him near the line of scrimmage and beats him to the inside to break up a pass. He has an edge that doesn’t always show up with cover corners, and I kind of love it. He’s physical, he can cover, and he can hit. Watching a cornerback who shows up in ways beyond making interceptions or knocking down passes is fun. This guy is really fun.

And now we come to Nick Saban’s safety production line. Collins figures to be Alabama’s third in four years to go in the first round. He came to Tuscaloosa as a prized recruit, even by Bama standards (a New Orleans kid Darth Saban coaxed from LSU’s backyard), but was relegated to special teams his freshman year because the Tide had Ha Ha Clinton-Dix patrolling the back end. As a sophomore last year, Collins was great — a 6-foot, 215-pound guy who both hit and covered, and looked like he could play in the NFL right now. 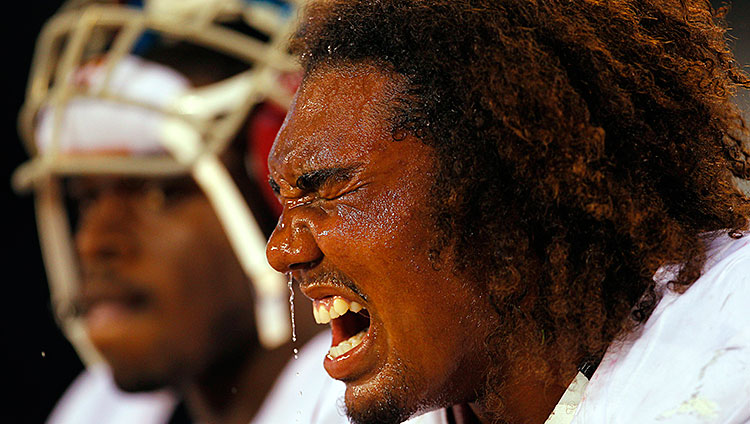 Williams is already the best pass-rusher with Sideshow Bob hair whom I’ve ever seen. So he has that going for him. Williams had 12.5 tackles for loss and six sacks for USC last season. And he did all of it with a lingering shoulder injury that needed surgery, forcing him to miss all of spring practice. Consider that he was an All-American without being healthy, and combine that with his crazy blend of size and athleticism, and you have one of the five best prospects in the draft.

Williams is listed at 6-foot-5 and 300 pounds, and although he plays a lot of defensive tackle for USC, he seems like the kind of player that NFL defensive coordinators would move around a ton. There are plays during which Williams looks like he could end up being a more gifted version of Muhammad Wilkerson. That physical talent means he won’t fall into the end of the first round like Wilkerson did. Williams will also be helped by more and more NFL folks realizing that a guy who doesn’t fit a traditional position along the defensive line can actually be a benefit instead of a problem.

The Big Ten is not really an NFL pass-rusher factory, but Michigan State’s Shilique Calhoun and Nebraska’s Randy Gregory are both considered potential top-10 guys. Calhoun had a very good year as a sophomore on one of the best defenses in the country, with 7.5 sacks and some stout play against the run (a side of the game younger edge rushers sometimes struggle with). There’s a good chance playing against the Spartans’ defense will be just as miserable an experience this season as it was last year, and Calhoun will be a reason why.

Out of all the guys on this list, I think Gregory is the one who could give whoever wins the quarterback derby a run for the no. 1 spot. He is 6-foot-6 and about 240 pounds, and he moves in ways that guys that long aren’t supposed to. He has great balance to go along with those crazily long arms and a ton of burst. In his first season with Nebraska last year (he was a juco transfer), Gregory had 10.5 sacks while making a bunch of other plays. He just looks like the type of long pass-rusher the NFL has fallen in love with. I wouldn’t be surprised to see people looking at him next April the way they looked at Dion Jordan — if Jordan had 12 sacks in his last season at Oregon.

Did you see that guy who always seemed to be running wide open past safeties and corners during Alabama games last season? That was Cooper, and he might be the first wide receiver taken in next year’s draft.

Cooper’s appeal is a bit different than some of the other wide receivers who have gone in the top 10 lately. He’s not dropping his shoulder and running people over like Sammy Watkins, he isn’t 6-foot-4 like A.J. Green, and he doesn’t have the insane college production of Justin Blackmon. Cooper is about 6-foot-1, somewhere close to 210 pounds, and he’ll probably run his 40 in just about 4.4 seconds. What’s to like about Cooper is that he’s just really good at playing wide receiver. He runs good routes for someone so young, he catches what’s thrown his way, and most importantly, he’s always open.

He may not be as imposing as Julio Jones, nor was he as highly regarded a prospect, but there’s the same feeling that when he’s out there, there just isn’t much to worry about.

I’d say the left tackle plan at Texas A&M is working out. After Luke Joeckel was taken second overall in 2013, Jake Matthews slid from right tackle over to Johnny Manziel’s left side for a season. The Falcons took Matthews sixth overall in May, and now Cedric Ogbuehi looks to be on the same track. He’ll move to left tackle this year, and he’s apparently the best prospect at his position in the country, and a possible top-three pick. Kevin Sumlin shouldn’t have (and hasn’t had) a lot of trouble selling that program to the best high school tackles around.

Just like with the quarterbacks, competition won’t be hard to find, though. Stanford has done its own work in churning out NFL offensive linemen, and Andrus Peat is next in line. Peat is a 6-foot-7, smooth-moving tackle whom teams hope they can take in the top 10, throw on the left side, and not hear another word about for the next decade. Iowa tackle Brandon Scherff is also assumed to be a top-15 pick, but it’s thanks mostly to his ability to erase people in the run game. There was a video making the rounds last week of Scherff hang-cleaning 443 pounds — three times.

I don’t spend a ton of time around weights, and even I know that’s a lot. As far as the football goes, Scherff needs to work more on his footwork than his brute strength, to the point that some people see him as a right tackle in the NFL. He’ll get his best test in pass protection when Nebraska and Gregory come to Iowa City for the season finale on November 28.