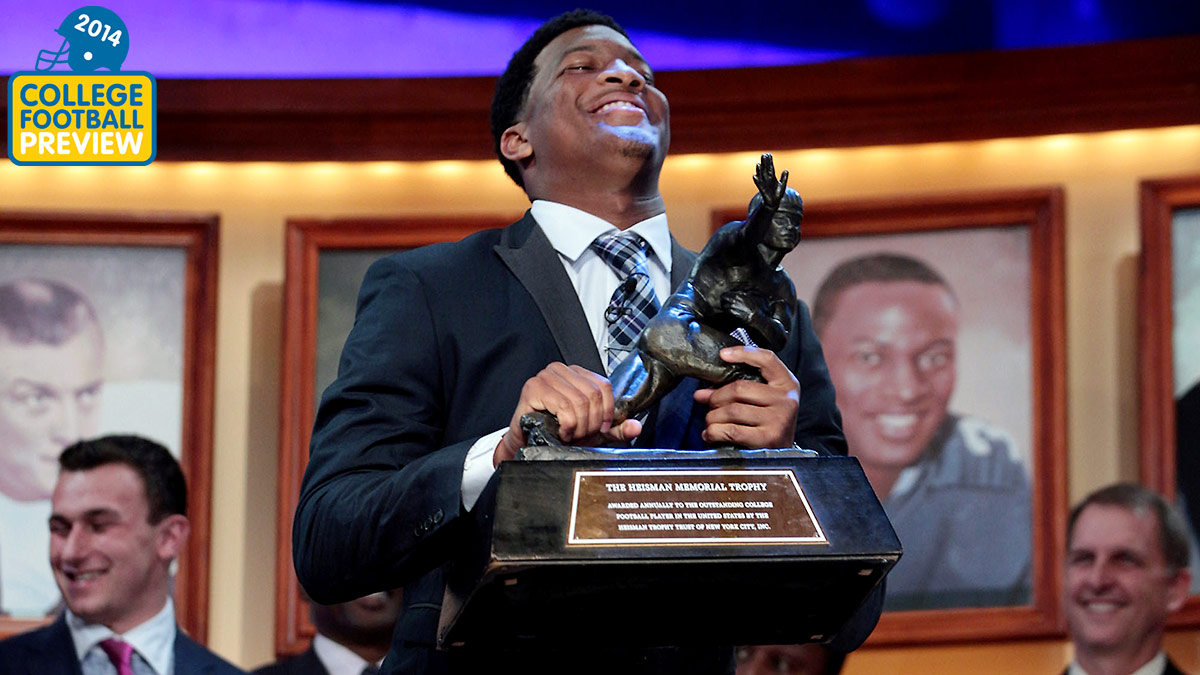 Ah, the Bovada.lv preseason Heisman odds! One of the surest signs that football season is right around the corner, and one of the easiest ways to ignite the fury of a cantankerous fan base. Their annual release has slowly become my favorite August tradition, if only for the resulting calls on “The Paul Finebaum Show.” Now that we’ve had some time to process the odds, let’s analyze the field, spotlighting 10 players whose chances I either love, hate, or don’t understand at all. (Looking at you, Dak Prescott!)

FRIENDLY REMINDER: Unless you live in Nevada, this exercise is purely hypothetical.

In a vacuum, I’d feel pretty good about Winston’s Heisman chances; in fact, I might not bother including anyone else in this preview, since the likelihood of Winston remaining the best player in college football this season seems quite high. But in a world in which Archie Griffin endures as the lone two-time Heisman winner — and in which humans generally get bored fast — I can’t bring myself to believe in a repeat.

Consider what happened last year to Johnny Manziel, who managed to improve upon his dazzling Heisman-winning 2012 campaign, yet somehow finished a distant fifth in the 2013 voting, behind such luminaries as Jordan Lynch and Andre Williams. If Manziel suffered from voter moralizing, Winston almost surely will. Plus, anything less than an undefeated season will register as a disappointment in Tallahassee, which is an unfair and impossibly lofty expectation, but also a reality.

After last year’s triumph, Winston deserves to be the preseason Heisman favorite … but that’s exactly why fans shouldn’t put money on him to win it again.

With guaranteed pinball numbers, a solid chance to advance to the College Football Playoff, and the absence of any Winston-like pressure to repeat, Mariota is far and away the safest bet on the board. An impressive performance against Michigan State in Week 2 could vault him into the driver’s seat, and mismatches against Wyoming, Washington State, and Arizona in the subsequent weeks should provide him with ample opportunity to extend his lead.

If all goes well, Mariota’s campaign will ultimately come down to Oregon’s November 1 tilt against Stanford, which will be looking to shatter the Ducks’ hopes and dreams for the third consecutive year. My only real concern is whether the ever-increasing distance of singular genius Chip Kelly will undermine the Oregon program, which speaks to just how difficult it is to poke holes in Mariota’s actual game.

Heisman voters have proven to be severely allergic to “system quarterbacks” like Case Keenum and Colt Brennan, who accrue gaudy statistics while playing in an advantageous offense, and for whatever reason Petty appears to have fallen into this ignominious camp. Consequently, his inevitably astronomical numbers may well be dismissed as “uncouth” or “overinflated” by a large swath of the Heisman electorate. Their argument will be that many quarterbacks could succeed in Petty’s position, whereas Winston or Mariota or whomever is an irreplaceable talent. Of course, these distinctions are largely subjective, as evidenced by Robert Griffin III’s Art Briles–aided Heisman in 2011, but we’d be foolish not to take them into consideration here.

As such, I’m thinking Baylor needs to go undefeated, or at least advance to the College Football Playoff, for Petty to be a serious Heisman candidate at season’s end. I mean, it’s going to be hard for him to significantly improve upon last year’s numbers, and those got him only seventh place!

Every year there’s an unmistakable pretender lurking in the field of supposed preseason Heisman contenders — think John David Booty in 2007, Jevan Snead in 2009, or Jacory Harris in 2010. Soon to join that illustrious group of once-hyped gunslingers: Hundley, who possesses all of the individual traits you’d want in a quarterback and thus has successfully convinced the college football cognoscenti of his impending supremacy. He’s got near-prototypical size, an NFL-ready arm, and outstanding mobility, so it’s no wonder so many folks are enamored of his potential. Admittedly, this potential sometimes manifests itself into fantastic on-field results, and barring a drastic regression, it will probably get him drafted highly next spring.

But the Heisman isn’t an award for owning a promising professional outlook; if it were, Andrew Luck would have three of them and Eric Crouch wouldn’t be allowed anywhere near the annual presentation ceremony. Hundley’s flashes of greatness are too infrequent to give him a legitimate shot at Heisman glory. More than anything, though, he’s efficient to the point of being boring, and that’s not going to fly with the thrill-seeking voting panel.

Our first non-quarterback! Gurley, who managed to rush for nearly 1,000 yards last year despite missing all of October with an ankle injury, returns to Georgia for his junior season as the Dawgs’ offensive centerpiece. With partner-in-crime Keith Marshall and junior receivers Malcolm Mitchell and Justin Scott-Wesley recovering from ACL tears, plus the untested Hutson Mason replacing Aaron Murray at quarterback, Gurley will certainly have the opportunity to enjoy a Heisman-caliber year. If he keeps scoring touchdowns like a football version of Superman, he’ll win it in a landslide.

If you’re going to bet on one of these guys, make it Henry: We’ve already seen what Yeldon has to offer, and while it is very, very good, it falls short of being Heisman-worthy. Meanwhile, Henry is a relatively unknown commodity, a shiny new toy with which Nick Saban can play, and though Henry is probably a year away from true Heisman contention, there’s an outside chance he could enjoy a breakout sophomore campaign along the lines of 2009 Mark Ingram.

Nevertheless, Yeldon and Henry will more likely cancel each other out of the race, as they won’t be able to compete with, say, Gurley or Wisconsin’s Melvin Gordon from a workload standpoint.

Mark me down as someone who finds the general exclusion of defensive players in the Heisman race to be total bullshit; linebackers and defensive backs and pass-rushers are players, too, and sometimes they’re even better than their offensive counterparts! As such, I view Jack’s ballyhooed transformation into a “runningbacker” as a necessary evil. He should be good enough to win the Heisman as a full-time linebacker, but due to rampant institutional positional favoritism (positionism?), he’s forced to sell out and play on offense if he wants a shot at college football’s top individual honor. On the bright side, this move puts him in prime position to actually take home the award, as there’s not much the voting committee loves more than a two-way player. (Remember when Stanford FB/LB Owen Marecic surprisingly finished 10th in 2010?)

UCLA has said Jack will primarily operate at linebacker this year, but we’ll see how long that lasts. If he does play on both sides of the ball, the main risk will be the heightened chance of injury. Then again, are we sure he’s not physically indestructible? Decide for yourself:

This is a thing that is happening, and I’m at a loss to explain it:

You’re probably thinking: Who? What? Why? How? Alas, there are no answers, only more questions. I’ll spare you most of them. Let’s just say that if this game log is capable of catapulting someone to fringe Heisman contention, then maybe the Tate Forcier hype machine was right all along.

If I’ve said it once, I’ve said it a thousand times: Fournette deserves a Heisman for his high school highlight video alone.

At 66/1, he’s my preferred long shot in the race, mostly because I don’t really view him as a long shot. First of all, LSU was the perfect landing spot for him; second of all, he’s probably already the most talented player in college football; third of all, he’s expecting to win the Heisman, which is something few players have the courage to come out and say, let alone as true freshmen. His reign of terror begins now.