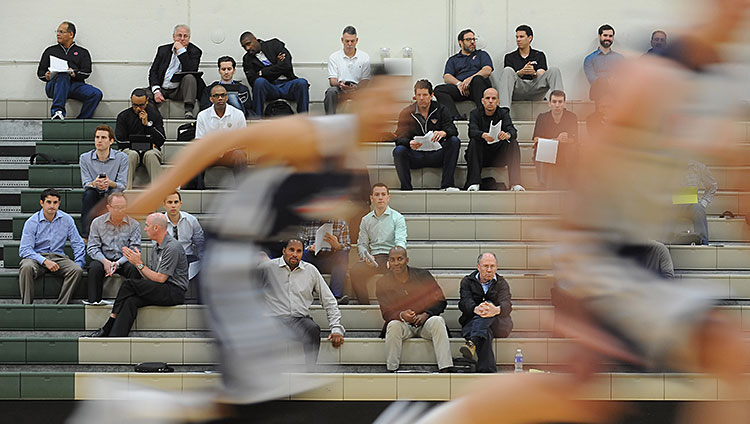 The poorly redacted scouting documents that came to light in the wake of the Danny Ferry debacle in Atlanta have produced a mystery all their own. Who are the unknown Cavaliers teammates whose feuding and inability to share the ball turned a popular preseason playoff pick into a rudderless mess? I JUST CAN’T FIGURE IT OUT. Could it be Sergey Karasev and Spencer Hawes? Henry Sims and Anthony Bennett? Who could it be?

While we’re pondering that puzzle, let’s take a look at some other redacted scouting documents, which came to me from my extensive network of anonymous sources. 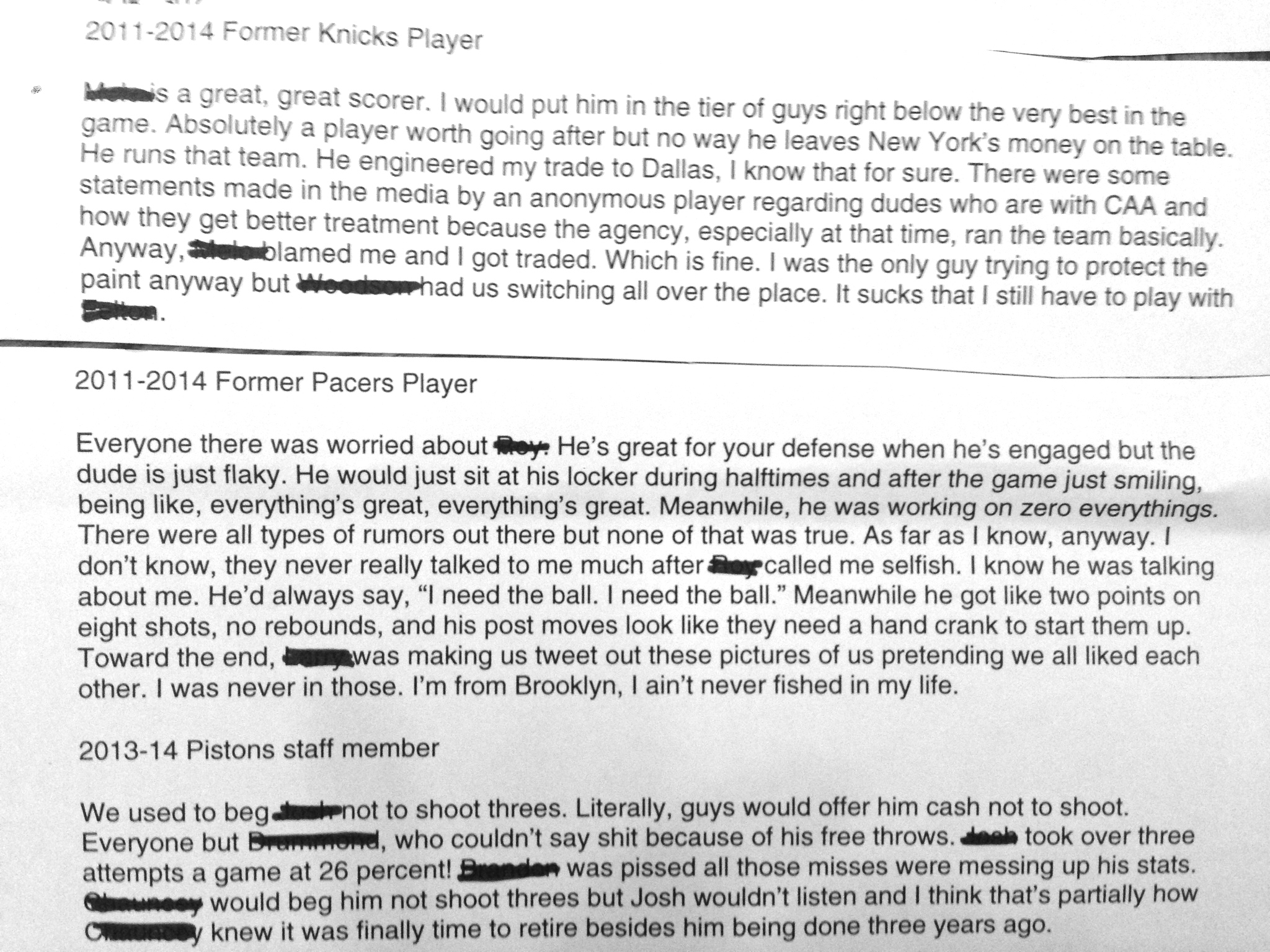 is a great guy to hang out with and a great teammate. Always complimented my Buffalo Jeans. We’d be out until four, five o’clock sometimes, games days, whatever. I’ve seen him drop 30 on teams the night after waking up at five in the afternoon. As for his defense, he told me that sometimes he just gets to thinking about things, like Game of Thrones theories or what we’re going to do later after the game, and he zones out. Like, there’s a video floating around that’s like a compilation of staring out into the distance or whatever as the other team just runs by him for layups and what not. Me and used to joke that it looked like when the batteries in your controller die. I did talk to about it a few times. I was like, “ what’s up with your defense?” and he didn’t say anything, just stared out the window. So I asked him again and he was like, “What?” So I go, “What’s up with your defense? Sometimes it looks like when the batteries in your controller died.” Then sat on a one of whoopie cushions and that distracted him so I never got an answer.

Everything with him is . I may have forgotten a few , but you get the picture. Hardest working player I’ve ever been around and it isn’t particularly close but the guy is like a basketball sociopath. Doesn’t know any of his teammates names. Called “Paul” even after they won their first title together. Called “Larry.” He knew Fisher’s name. Thing is he called every point guard “Fish.” He calls “Fish.” He used to make get dressed and taped in the broom closet. When I asked him why he said, “So Fish can get used to being around the things he’ll use when he becomes a janitor next year.” He was right about that one though. Once, got Vanessa this diamond ring because he thought she might divorce him. was said something to the effect of that ring is bigger than my condo and yelled, “Fish, get back in your closet!” That was funny. That was the night he scored 81, so we were on the road.

would come down and sit at the end of the bench and make different bets with players. Like he bet that he would never start a game or average five points and had to do landscaping at Jordan’s house for like two months in order to pay him back.

I was upset when they traded me because I loved my teammates and loved playing for Coach but I won’t miss the beating my body took. Coach would always say, “My watch is broken,” when you would ask him to come out of the game. I led the league in minutes per game two years in a row from 2011 to 2013 and every time I tried to ask out for a rest, would pretend to he didn’t see me. I remember when I had to have a spinal tap during the playoffs and came over to me. He said, “I know you’re not feeling well, but if you could just give us 35-38 minutes tonight, we really need it.” I was like, “Coach, I have a 102 degree fever.” So he goes, “OK, 30?”

is a great, great scorer. I would put him in the tier of guys right below the very best in the game. Absolutely a player worth going after but no way he leaves New York’s money on the table. He runs that team. He engineered my trade to Dallas, I know that for sure. There were some statements made in the media by an anonymous player regarding dudes who are with CAA and how they get better treatment because the agency, especially at that time, ran the team basically. Anyway, blamed me and I got traded. Which is fine. I was the only guy trying to protect the paint anyway but had us switching all over the place. It sucks that I still have to play with .

Everyone there was worried about . He’s great for your defense when he’s engaged but the dude is just flaky. He would just sit at his locker during halftimes and after the game just smiling, being like, everything’s great, everything’s great. Meanwhile, he was working on zero everythings. There were all types of rumors out there but none of that was true. As far as I know, anyway. I don’t know, they never really talked to me much after called me selfish. I know he was talking about me. He’d always say, “I need the ball. I need the ball.” Meanwhile he got like two points on eight shots, no rebounds, and his post moves look like they need a hand crank to start them up. Toward the end, was making us tweet out these pictures of us pretending we all liked each other. I was never in those. I’m from Brooklyn, I ain’t never fished in my life.

We used to beg not to shoot threes. Literally, guys would offer him cash not to shoot. Everyone but , who couldn’t say shit because of his free throws. took over three attempts a game at 26 percent! was pissed all those misses were messing up his stats. would beg him not shoot threes but wouldn’t listen and I think that’s partially how knew it was finally time to retire besides him being done three years ago.