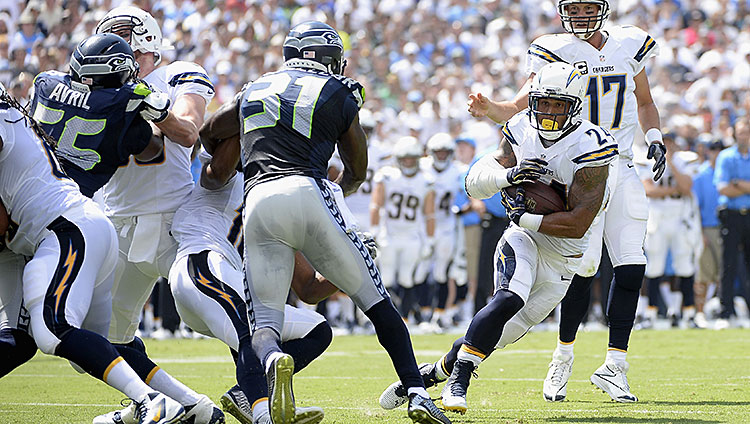 If you want to be an offensive coordinator, you should know that a prerequisite for the job is using the phrase “stay on schedule” as often as possible. It refers to a widely held notion that what teams do on first and second down directly plays into what they can do on third down.

If a first-down run goes for minus-2 yards, it short-circuits everything else. The trains are no longer running on time, and for the rest of the series, the defense is allowed to dictate the terms. It’s one thing to chirp the idea. The San Diego Chargers live by it. Staying on schedule is exactly how they knocked off the Seattle Seahawks on Sunday.

San Diego built the second-best offense in football last year by staying on schedule. Only five teams ran the ball on a higher percentage of first-down plays than the Chargers, who did it 54.2 percent of the time. Ryan Mathews led the league in first-down rushes with 175, averaging 4.15 yards in the start of a process that helped build the offense into a study of efficiency.

Only the Colts (6.24) averaged fewer yards-to-go on third down than the Chargers (6.30), and only four teams faced more third-and-5-or-less situations than San Diego. The Chargers used those consistent third-and-manageable spots to become the best third-down team in the league. No team converted more first downs, or converted them more often.

Third-and-short helps, but you have to convert them. The Chargers were also perfectly set up to do so. Above is a play from their Week 10 game against the Broncos last year. It’s third-and-4, late in the third quarter. Keenan Allen, as he often does, beats the corner off the line of scrimmage, and Philip Rivers hits him for a quick, easy 8-yard gain. Only Anquan Boldin had more receiving yards on third down than Allen last year, which isn’t a coincidence. Both Boldin and Allen survive on creating separation with short-area quickness. They are ideal options when all an offense needs is a reliable, moderate chunk of yardage to keep drives going. Antonio Gates is the same type of option, and it’s no surprise he also finished in the top 20 in third-down receptions.

At a certain point, though, it all hinges on Rivers. Even taking the situational advantages into account, Rivers was remarkable on third down last season. He completed nearly 65 percent of his passes, best among starting quarterbacks, and only Colin Kaepernick averaged more yards per attempt. With his instant release and the accuracy he has on short throws, he’s probably the ideal quarterback to execute San Diego’s offensive plan.

It’s a plan that we saw at its purest Sunday. The Chargers had more trouble running on first down than they normally do, averaging barely more than two yards per carry against Seattle’s defense. But by third down, they were right back where they usually are. San Diego’s average yards-to-gain figure was 6.29, almost identical to their mark from last year. The Chargers were consistently looking at easy-to-convert scenarios in the first half, when they saw two third-and-1 plays and twice faced third-and-2. All four resulted in first downs.

Like Allen and Gates, Danny Woodhead is just another convenient third-down weapon for Rivers. That’s a tough play to stop when the offense only needs a couple of yards. Overall, San Diego converted on 10 of its 17 third downs against Seattle, with Rivers going 9-of-12 on third-down throws.

The product of sustaining so many drives Sunday was the same as it was for the Chargers last year: It wore the opposing defense out and kept their own defense fresh. San Diego led the league in both drive length and average yards per drive last year. The Chargers finished last in defensive DVOA last year, but still managed to finish 11th in scoring defense. The biggest reason is that only three defenses in football played fewer snaps.

On Sunday, Russell Wilson and the Seahawks played only 40 snaps, while the Chargers held the ball for more than 42 minutes. Seattle’s offense looked just as potent as it did in its throttling of the Packers a week ago. It just didn’t have enough chances to take advantage.

Through two games, only Washington and Dallas have played fewer defensive snaps than the Chargers — a sign that their ball-control approach from a year ago might be here to stay.

San Diego actually averaged fewer yards-to-go on third down against Arizona in Week 1 than it did against the Seahawks. The problem in that loss was what the Chargers did with those plays. Rivers went an uncharacteristic 4-for-12 on third down, thanks to a combination of varying pressure and cover looks from Arizona, some Eddie Royal blunders (two drops and a broken-off route that led to an interception), and a couple of excellent plays from Arizona cornerback Jerraud Powers. The Chargers aren’t always going to covert 59 percent of their third downs like they did against Seattle, but Rivers completing only a third of his third-down passes is an even bigger outlier. 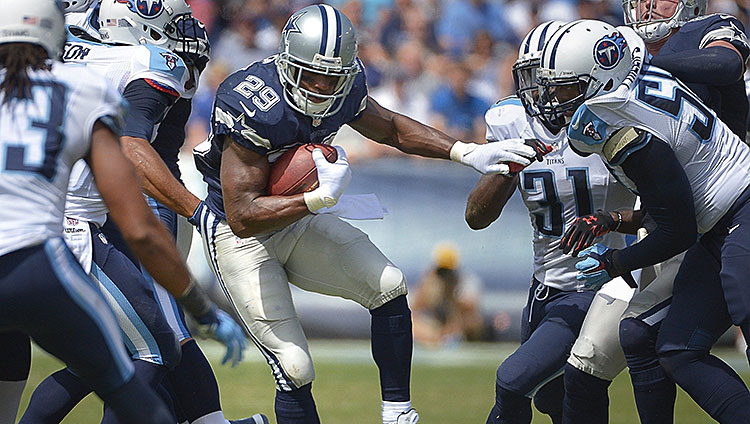 The Cowboys’ spot at the bottom of the defensive snaps list is something to watch as the season continues. Dallas, in several ways, would be well served to mimic the Chargers’ approach from a year ago. Rod Marinelli’s defense looked passable in Week 2, but it’s still a unit that probably needs protecting. Luckily, the Cowboys offense is set up to do just that. Through two games, DeMarco Murray is averaging a crazy 6.18 yards per carry on first down. That type of success isn’t new. Murray led the league last year in yards per carry on first down among backs with at least 100 rushes. The difference is in how often the Cowboys are letting him do it.

A year ago, Dallas ran on first down on 44.5 percent of its plays, which was below the league average (about 50 percent). This season, it’s run on nearly 63 percent of its first downs. That’s a massive jump, one that’s likely to even out as the season goes along, but it’s still an encouraging sign. If the Cowboys can consistently get manageable third downs, it means less time on the field for their defense, and less chances for other teams to take advantage of it.

The Chargers, both on Sunday and all of last season, have shown that a ball-control offense is a huge step in dictating how a game is going to go. For teams set up to do the same, it’s a plan worth replicating.