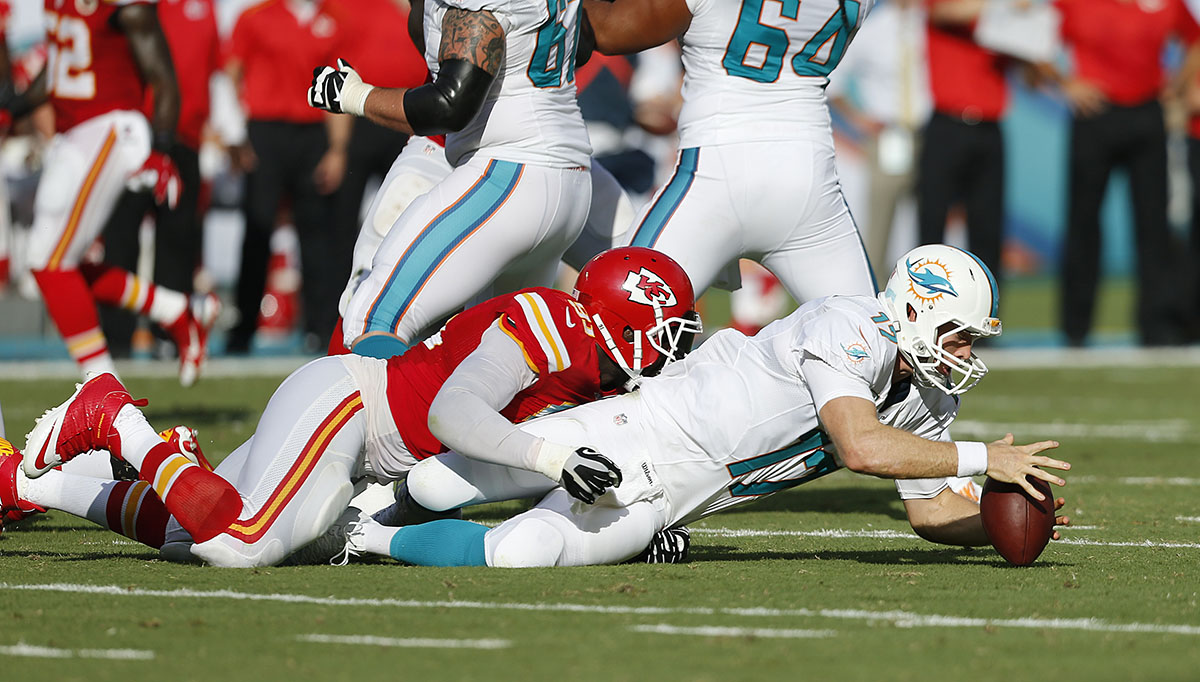 The football season is a fickle beast. In Week 1, the Dolphins had what was seen as the weekend’s most impressive upset, handling New England at home. Two losses and some revelations about the Patriots later, and here we are — with a head coach refusing to commit to his starting quarterback and players on the defense already calling out coaches in the press. That got bad in a hurry. The question now, for both QB Ryan Tannehill and the defense, is just how bad.

This was always going to be a critical season for Tannehill. After two underwhelming years, Miami fired offensive coordinator Mike Sherman — Tannehill’s college head coach — and replaced him with Bill Lazor, the quarterbacks coach who got so much out of Nick Foles while also soaking up the wonder of Chip Kelly’s offense. The Dolphins rebuilt their offensive line, too, with the hope Tannehill wouldn’t have to spend another season picking grass out of his teeth. It’s a pretty clear plan: new line, new coordinator, and the most expensive wide receiving corps in the league. It’s also a plan that took less than a month for Miami head coach Joe Philbin to publicly waver on.

Philbin hasn’t said Tannehill is going to the bench, but not saying much of anything has its own effect. Moving on from Tannehill at this point would be drastic. We’re three games into his third season as the starter. That’s the same time Blaine Gabbert was yanked out of the starting role for the Jaguars.

Tannehill hasn’t even approached Gabbert levels of futility, but his numbers aren’t all that inspiring, either. In Pro-Football-Reference’s adjusted yards per attempt, Tannehill’s 6.01 through three seasons ranks 60th among quarterbacks with at least 500 attempts. The names around him aren’t terribly inspiring. He’s two spots behind Jon Kitna, three spots ahead of Josh Freeman, and just edging out the likes of J.P. Losman, Trent Edwards, and Shaun King. Judging Tannehill solely by the numbers, though, isn’t really fair. The Dolphins’ pocket was an uninhabitable place for a quarterback last year. Only Andrew Luck — who is a cyborg — and Matt Ryan got hit more last season.

This was supposed to be the year Tannehill got an honest shot at breaking through, and after three weeks, it doesn’t feel like he’s played poorly enough to have that plug pulled yet.

Tannehill was 21-of-43 in Miami’s 34-15 loss to Kansas City on Sunday, but the raw completion totals are misleading. No team in the league had dropped more passes over the first two weeks than Miami. The Dolphins dropped three more perfect throws against the Chiefs and mishandled a couple more that were borderline catchable. One of Miami’s problems is that despite all the money it has thrown at its receiving corps, the overall talent just isn’t that good. That starts with Mike Wallace, whose cap figure is about two and a half times that of anyone else’s on the team. Wallace has played better this year than he did under Sherman, but he’s still a borderline no. 1 receiver who gets paid more than Calvin Johnson.

Four more of Tannehill’s incompletions against Kansas City came from batted balls. In a way, that makes his overall stat line look a little better, but the deflections are also symptomatic of Tannehill’s worst trait.

He still tends to lock in on receivers, and as he stares down Charles Clay here, it gives Dontari Poe — and about two other Chiefs — the chance to get a hand in the passing lane.

It may be a product of how quickly he had to get rid of the ball a year ago, but Tannehill had a tendency Sunday to make the first throw instead of the best one. On this third-and-5, he has Lamar Miller wide open after Kansas City brings pressure off the left side, but Tannehill elects for a covered Brian Hartline instead. With Justin Houston coming unblocked off the edge, there’s a chance Tannehill may not have had that extra half-second to find Miller, but this is the type of play that happened a lot Sunday. Rather than let all the routes finish developing and allowing a secondary and tertiary receiver to come free, Tannehill pulled the trigger on an early read the Chiefs had taken away.

Tannehill’s inability to move through his progressions shouldn’t be surprising. Sunday was his third start in this offense. Before playing the Giants in Week 2, Bruce Arians said it took Carson Palmer half a season to get acclimated in his offense.

The other significant problem with Tannehill this year is one we’ve seen before — sort of. Since he came into the league, Tannehill has consistently had trouble with the deep ball. The numbers show that’s continued this year — on passes more than 20 yards downfield, he’s 1-of-11 with a 1.4 QBR — but a lot of it has been exacerbated by some awful drops. Dion Sims and Wallace ruined potential big gains against the Patriots, and Hartline dropped what might have been a long touchdown against Buffalo.

It’s that type of play that has me leaning toward giving Tannehill the benefit of the doubt through three games. He’s had his issues, but at no point while watching the Dolphins have I thought he was playing poorly enough to lose his job. There’s no going back on a move like that. It feels too early to start over at quarterback.

Along with the dustup over Tannehill’s future, some discord among Miami’s defense also came to light recently. The Miami Herald reported that some of the Dolphins were “beyond furious, irate” at parts of the defensive game plan, notably the choice to have Cameron Wake cover running back Joe McKnight out of the backfield.

At first glance, it’s hard to blame them. Taking one of the three best pass-rushers in football and making him turn around and run backward in coverage seems silly, but the McKnight touchdown was emblematic of the real problem for Miami’s defense.

The Dolphins’ front four is among the best in the league. Wake, Olivier Vernon, Randy Starks, and Earl Mitchell make for a frightening group, one that can do what Miami did to the Patriots in Week 1. Miami’s problem is what’s going on behind them.

For the second consecutive week, Miami was without Dannell Ellerbe and Koa Misi in the linebacking corps. The Chiefs spent most of the afternoon picking on their replacements. Almost all Kansas City’s damage on offense came in the middle of the field, either on out-breaking routes in man coverage or in the running game.

It wasn’t just Wake who got chewed up by McKnight on angle routes. Ellerbe’s replacement, Jelani Jenkins, struggled, too. The failures of Jenkins and Jason Trusnik — in for Misi — likely pushed defensive coordinator Kevin Coyle to try a few new wrinkles, such as dropping Wake and Vernon, to slow down the Chiefs offense in the middle of the field.

That didn’t exactly work either.

Miami also had its share of trouble defending the run, which is a good reminder that stopping the run is a front-seven task, and not something reserved for a defensive line. Knile Davis gashed the Dolphins all game, and his biggest gain of the day was a product of both Jenkins and Trusnik being in the wrong spots.

Beyond the practical, schematic reasons for the Dolphins’ troubles, there’s an even more worrisome element in play: For the second consecutive season, the team seems dysfunctional on the field and off. Philbin rightly came under fire last year after the Richie Incognito–Jonathan Martin incident, which was enough for several people in the organization to lose their jobs.

A year later, it’s taken just three weeks for trouble to start bubbling over again. Whether Tannehill should or shouldn’t be the starting quarterback, there was a better way for the Dolphins to go about it than leaving the specter of benching him hanging over the rest of the season. There were some who viewed Miami’s problems last year as issues that originated right at the top. So far, the results this season have done nothing to prove them wrong.