Adopt a 2015 College Football Team: Because Everyone Needs a Plan B 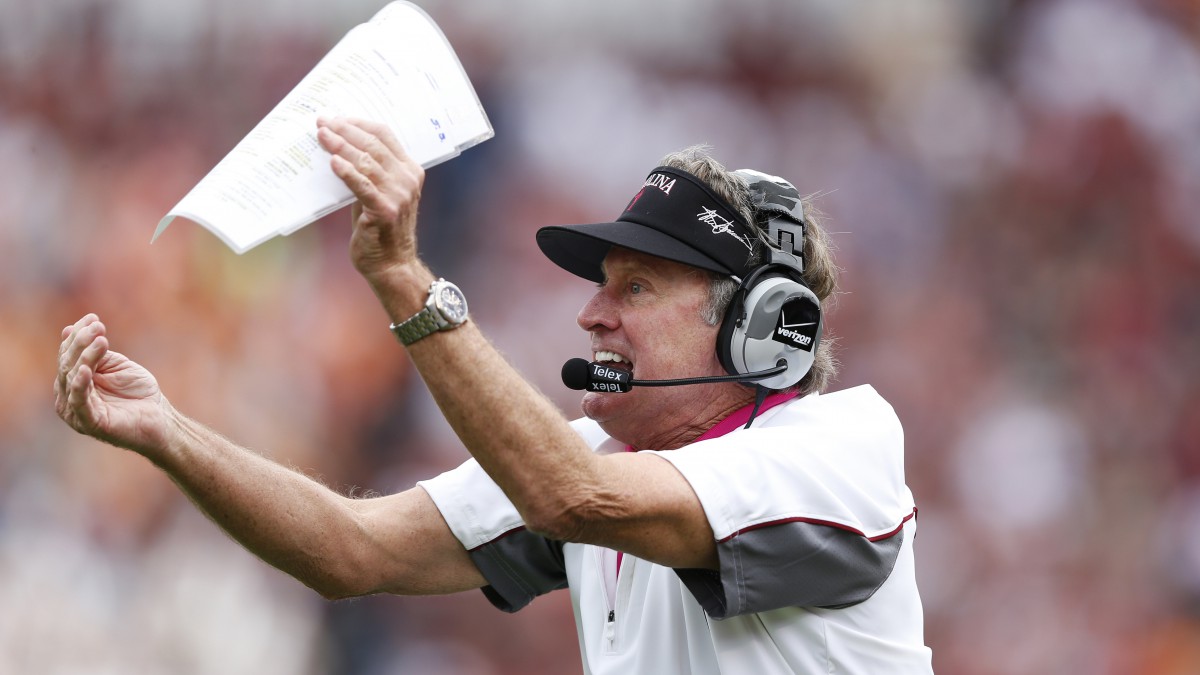 With the countdown to the 2015 college football season shifting from days to hours, it’s time for final mission checks. Do you know where the Pac-12 Network is without glancing at your cable provider’s channel guide? Have you thoroughly road tested tweaks to your garbage-can punch recipe? Do you have identification labels, listing your name and blood type, sewn inside the collars of all shirts you plan on wearing into opposing stadiums? Are all of your auxiliary cheering interests for the year holstered at the ready?

This last bit’s important. College football contains multitudes, and to really live fully within its too-brief seasons, so must you. Even the most legacy-laden, die-hard fan has the emotional bandwidth to follow more than one team — and given that any weekend contains something like 75 games, it’d be unforgivably wasteful not to seize every opportunity to do so. The possibilities of fandom permutations are as limitless as your imagination. Some folks employ what you might call a strafing approach, and while there’s nothing illegal about that, isn’t it just the tiniest bit tacky? Don’t you crave a little curation in your football intake?

The Grantland On Your Side Help Line is here for you. You tell us who you are, as well as the aspects you crave in an auxiliary fandom; you’ll then be promptly matched, space permitting, with a program that fits your interests. This marks the second year of this little experiment; a year later, most of those picks hold up pretty well. (This is not something that I, person who had South Carolina down as a playoff team last season, get to say a lot.)

To the request line!

@HollyAnderson coach who may be a crazy person, live animal mascot, weeknight games.

I … look, I know how this is going to sound, but stay with me here: South Carolina. You’ve got Steve Spurrier, whose bonkers bona fides need no further illumination in this space. You’ve got Sir Big Spur, who once drank from a glass of Spurrier-branded wine on national television. And you’ve got the Gamecocks, back in their season-opening Thursday-night slot this very week, hosting North Carolina in Charlotte.

This is by far the most common type of appeal sent in during the adoption phase, and it’s not hard to figure out why: Isn’t this, or something very near to this, what we all want out of the sport? A man who might go off-script near a hot mic; a wild animal who can’t be counted on to behave in front of a camera; a team frolicking for our collective enjoyment on a school night?

Speaking of Spurrier, his former squad promises once again to be primarily powered by defense in 2015. It’s a 40-hour drive of nearly 2,800 miles from Gainesville to Pullman, Washington, but if you can cast your eyes that far, Washington State might be the move for you. Even without quarterback Connor Halliday, Mike Leach’s Cougars are still a better bet to throw than run on every single offensive play. This contraption may make a lot of noise and emit strangely colored puffs of smoke, but it feels safe to count on a couple of things: that Leach will coax buckets of points out of it, and that his sophomore-led offense will look pretty sophomoric at times.

@HollyAnderson WM w/facial hair ISO a bad team that will be good next year. Want to have liked them before they were popular.

Callers, it appears you both want the same thing, and for an answer, let’s stay out west with the California Golden Bears. With that nine-game Pac-12 schedule plus two home nonconference games, only their Week 3 trip to Texas takes them out of the league footprint, and Matt Hinton has the Bears pegged for a big leap this season. And even in weeks when they’re not part of the conference’s last flight of kickoffs, their games are all but guaranteed to run late into the night thanks to Sonny Dykes and Tony Franklin’s prolific passing tendencies.

You have asked a question, West Virginia fan, and you may already have the answer in your own backyard. Your Mountaineers will need a hot start to avoid immediately torpedoing their own season — inviting Georgia Southern to Morgantown in Week 1 was whose idea again? — but look at when they play the Big 12’s three presumed front-runners and inhale the brimstone scent of trap games. TCU will be coming off a bye, Baylor coming off a road trip to Kansas, Oklahoma off a bye. This is shaping up to be a strong defensive season for the Eers (I know, right?), and they’re going to catch one of those teams off guard.1

In accordance with Your will, O Caller, look no further than Your very most favored football program,2 Notre Dame. The Irish are ranked, rich at many skill positions, and enjoying a very favorable outlook on the season, which is sometimes where things tend to go all sideways for them. You’ll either be feasting on the lamentations of the Irish themselves or on those of their thirstiest detractors. Take Your pick.

This is some tall order, but the team that may come closest to fulfilling these myriad requests is Notre Dame’s Week 3 opponent, Georgia Tech. Traditions? Pick one. Dialect? Here’s a glossary full. Disaster? You betcha. And while the 2015 Yellow Jackets are well equipped to mow down their schedule, the odds are not on their side: Add trips to Notre Dame and Clemson, plus their regular-season rivalry with Georgia, plus drawing Florida State out of the Atlantic, and clearing every hurdle seems unlikely. Not that we all wouldn’t love to see Paul Johnson have to do extra press appearances for a playoff game, but a finish just outside the New Year’s Six slots is a better bet.

@HollyAnderson Something with a little, 'True Detective Season 1.'

If you’re specifically angling for a dispensation to root for LSU, caller, here you go. If not, well, the song remains the same as last year: Really, we could all do well to live a little bit more like LSU fans in our daily lives.

@HollyAnderson Thanks for taking my call, I am looking for a long time loser ready to turn it around just enough to disappoint in December.

Doesn’t this feel like NC State’s year? It kind of does, if the Wolfpack’s defensive prowess ever catches up to Jacoby Brissett and the ground game on offense! But make sure to place this prediction in its proper context: If it’s going to be NC State’s year, it’s going to unfold in the NC State way, which means that the one thing you can expect is unexpected ruination, the team’s primary association in recent years. Just ask Clemson in 2011. Ask Florida State in 2012.3 Or ask State fans themselves:

@HollyAnderson as an nc state fan, the number of times nc state has a ruined nc state's own season is extraordinarily high. so all of them.

Far be it from me to try to pin the Wolfpack within any sort of predictive matrix, but that’s exactly what I’m here to do, so: Look for NCSU to knock off either Clemson on Halloween or Florida State two weeks later, to follow that up with a late loss to Syracuse, and to end its 2015 run with an even more inexplicable loss in a December bowl. Look, I don’t make the rules.

@HollyAnderson high scoring offense w/ a defense that isn't vanilla. Smaller conference preferred. Doesn't have to be a great team. Thanks!

If you can allow a little wiggle room when it comes to the “smaller conference” request, caller, a curveball: What about something in a nice Texas Tech, a team high on potential that’ll be happy to see a bowl this season after a 4-8 finish in 2014? Patrick Mahomes is one of the more exciting young quarterbacks you’ll see this year, and on defense, David Gibbs did underrated work as Tony Levine’s DC at Houston, and has now been imported to Lubbock to teach the team his own special game of Hungry Hungry Hippos.

@HollyAnderson UVA, but with a functional offense

So it turns out that this tweet was in reply to a thread about Ridley Scott’s Prometheus, and was not specifically requesting a football team, but by the time I figured this out I’d already given you Arkansas. I think it tracks pretty well, don’t you?

Heat Check: Is Pat Riley’s Rebuilt Squad the Most Intriguing Team in the NBA?