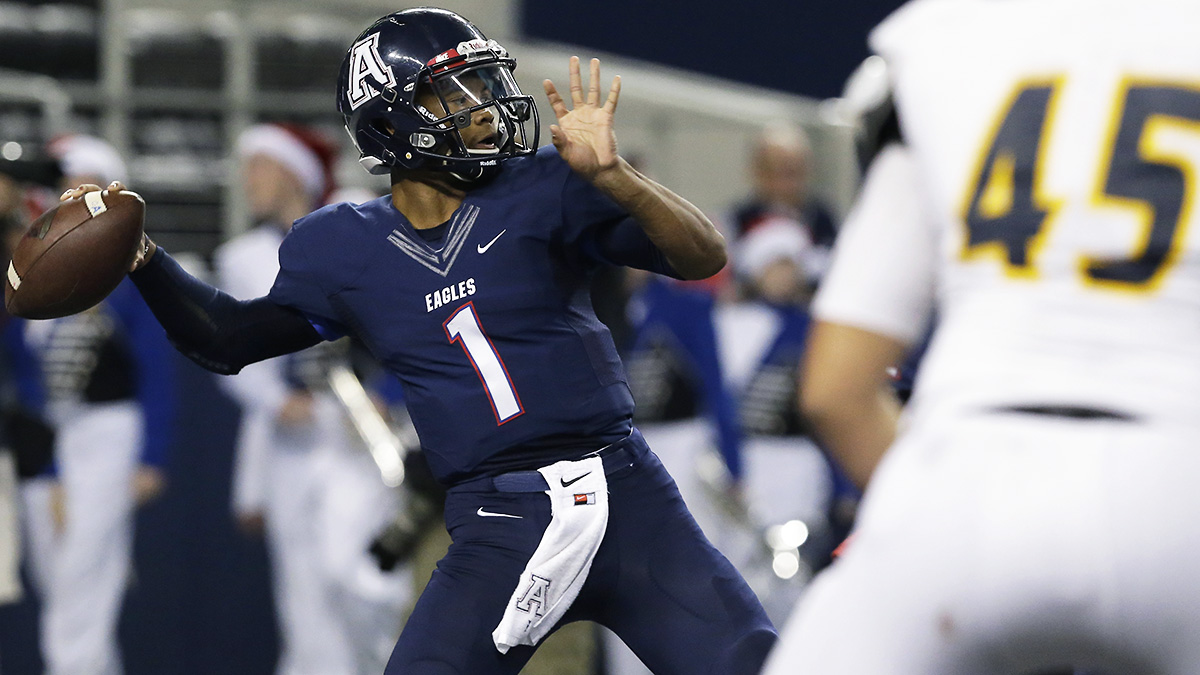 On Monday, I named eight transfers to watch this college football season, and you’ve presumably spent the past 48 hours studying them extensively. While I’m proud of you for doing your homework (especially if you’re a North Carolina student!), our preparation for the season is far from complete.

Because I care deeply about your knowledge of ascendant FBS talent, I’m going to discuss impact freshmen today. And I’ll have none of this redshirt nonsense: I’m talking about real freshmen, the dudes who attended prom just a few months ago. There’s no way they should be able to handle the rigors of major conference football yet, but here they are. And as such, they deserve our utmost attention.

No combination of words in the English language can do justice to Hines’s mind-bending athleticism, but this video of him performing a midair corkscrew while making a one-handed catch sure gets the job done:

It’s abundantly clear why Wolfpack coach Dave Doeren expects Hines to contribute immediately in multiple roles, including (but certainly not limited to) running back, receiver, kick returner, and punt returner. The North Carolina native and four-star prospect will take some of the offensive load off of quarterback Jacoby Brissett’s shoulders and serve as a supremely versatile weapon out of the backfield from day one. In other words, he’ll be to all-purpose yards what Joey Chestnut is to hot dogs, Les Miles is to grass, and Jim Delany is to bad ideas. That’s high praise!

Hyatt, a consensus five-star recruit out of Georgia, is poised to become the first true freshman to start in Week 1 for the Tigers, which is even more impressive considering he plays a position as demanding as left tackle. He’ll be tasked with protecting the blind side of sophomore sensation Deshaun Watson, who’s coming off a torn ACL, and filling the void left by former Clemson standout Isaiah Battle, who unexpectedly declared for the supplemental draft in June. That’s a lot of pressure for anyone, let alone an 18-year-old who’s yet to play a single game in Death Valley. Fortunately for Tigers fans, though, Hyatt has ample experience pancaking some of the best defenders in the nation.

For the second consecutive year, Texas A&M boasts one of the top freshman quarterback prospects in the country. Last year it was Kyle Allen, a prototypical pocket passer who started five games for the Aggies after Kenny Trill unceremoniously reverted back to Kenny Hill. Allen performed fairly well for a true frosh and earned MVP honors at the Liberty Bowl, leading many to assume that his position atop the depth chart was secure entering 2015, especially after the erstwhile Kenny Trill transferred to TCU.

Nevertheless, Kevin Sumlin is refusing to hand Allen the starting job. And why should he? With true freshman Murray also fighting for the QB1 label, A&M’s got the best quarterback situation west of Columbus.

Recruiting aficionados are well acquainted with Murray, whose playing style inevitably draws comparisons to Johnny Manziel — including from Murray himself. For the uninitiated, the five-star prospect and legendarily successful high schooler turned heads for choosing A&M over Texas despite Allen’s presence on the roster, a clear sign of Murray’s extraordinary confidence. While Murray is likely to start the season on the bench, don’t expect him to be a clipboard-holder for long. His eventual ascension to the Aggies’ starting lineup already feels like a foregone conclusion.

Although Jim Mora steadfastly maintains that Rosen and redshirt junior Jerry Neuheisel (who bears an eerie resemblance to Sunshine from Remember the Titans) are battling for the starting job, this is widely assumed to be bullshit. Rosen, the Class of 2015’s top pro-style quarterback according to most scouting services, is going to be the Bruins’ starter, and he will be expected to do what his enigmatic predecessor, Brett Hundley, ultimately failed to accomplish: make UCLA a bona fide national championship contender. With Oregon not on the Bruins’ schedule, a relative down year expected for Stanford, and USC still feeling the residual effects of sanctions, 2015 seems like a good year to pull that off.

I’m a sucker for both alliterative names and run-stuffing heavy-set guys, so Thompson is very much my kind of football player. Don’t let his size fool you, though: Thompson is still athletic enough to rush the passer, so he’ll be tormenting running backs and quarterbacks during his college career. There’s a reason he’s often likened to Nick Fairley1 and was given five stars by every recruiting website in the known universe. To quote Packers GM Ted Thompson on B.J. Raji, “The good Lord just didn’t make many people like this.”

Bad news for SEC quarterbacks: According to ESPN RecruitingNation, an incredible five of the top 10 overall prospects in the Class of 2015 were defensive linemen who went on to sign with SEC institutions, including class headliner Cowart. And no, it doesn’t take long to see how Cowart earned that distinction:

If this video establishes one thing, it’s that Cowart was born to play for Will Muschamp. Of course, Cowart probably realized this before anyone else, having originally favored Florida in his college search before settling on Auburn once Muschamp was named the Tigers’ DC. The former Gators coach and defensive savant is sure to get the most out of his shiny new 6-foot-4, 258-pound pass-rusher, and he’s going to need to, seeing as projected starter Elijah Daniel — who tied for the 2014 team lead in quarterback hurries — was kicked off the team in May following a burglary charge.

Marshall, the Class of 2015’s consensus top-ranked corner, boasts a tantalizing combination of size and speed and figures to play a mix of nickel corner and safety this year. His unyielding physicality will cause opposing receivers to think twice before they run across the middle of the field, and getting to practice against sophomore speedster JuJu Smith-Schuster will only make him better.

Also, it should be noted that Marshall announced his decision to attend USC with a full-fledged music video (filmed by #1 Cornerback Productions, natch). Let’s hope this becomes a trend, because the hat dance has run its course.

You know Texas football is struggling when fans and writers are citing a freshman linebacker’s spring game statistics as a reason to be enthusiastic about the upcoming season. That said, Jefferson did have an impressive spring game, and his momentum seems to have carried over to preseason camp. Sadly, the vast majority of his supporting cast is another story.