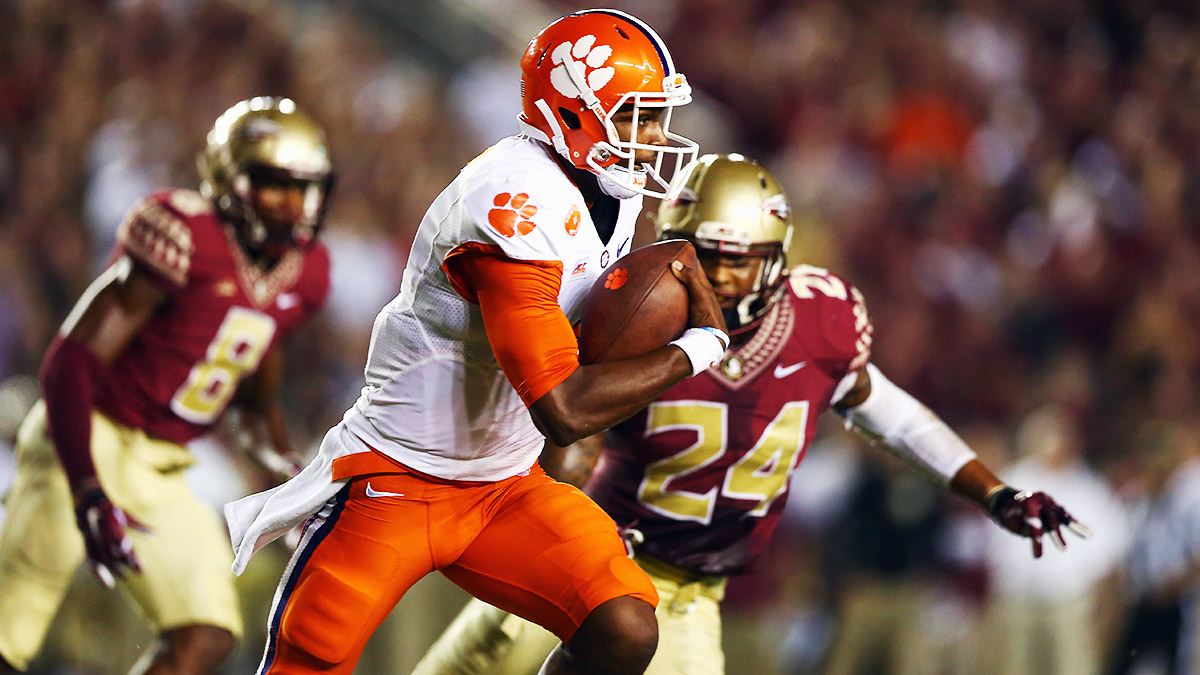 The future of Clemson football eats sour gummy worms before every game, has a lucky pair of socks he insists on wearing under his game-day socks, and displays deceptive speed.

Which isn’t to say that there’s anything surprising about Deshaun Watson’s speed on the field. The true freshman was the nation’s top quarterback recruit in the class of 2014 and entertained offers from the likes of Alabama, Auburn, Florida State, Georgia, and Ohio State. Before that, he started for four years at Gainesville High in northeastern Georgia, where he succeeded current Crimson Tide starter Blake Sims. But the velocity with which Watson has been able to adjust to a college conditioning program? And adapt what he knew from running a similar offense in high school to the Tigers’ methods? And take over the starting job by Week 5 of his first season of college ball, a game in which he threw six touchdown passes and knocked down record after record? That was fast.

For Chad Morris, Clemson’s offensive coordinator and Watson’s position coach, it probably still seems like it’s taken forever to get his protégé down that hill and onto the field at Death Valley. Morris was the first coach aboard this particular bandwagon, and he’s been here a while: Watson was the second player Morris offered a scholarship at Clemson, about a week after taking the OC job.

“I remember many a January night,” Morris says, “once a week, going and sitting in his high school gym and watching him play basketball as a sophomore, and me being the only college coach there. And just thinking, watching him run up and down the court … ” Morris swings his head back and forth, scanning an imaginary floor filled with imaginary basketball players. “I sure hope this’ll be worth it. I sure hope this’ll be worth it. I could be doing something else. I sure hope this is worth it.” While it’s too soon to know for sure just four games into Watson’s first season at Clemson, the early returns on Morris’s investment are looking promising.

Watson committed to the Tigers in February 2012, as a high school sophomore, attracted by the similarities between Clemson and Gainesville. He doesn’t feel far from home here, and he doesn’t want to, a desire that intensified after watching his mother, Deann Watson, successfully battle tongue cancer while Watson was still in high school:

Once Watson arrived at college, a cracked collarbone sidelined him for the Tigers’ spring game and prevented him from displaying his grasp of Morris’s offense to a wider audience. But there was a moment in fall camp, Morris says, when he first realized that the Tigers — who were in the process of replacing quarterback Tajh Boyd, running back Roderick McDowell, receivers Sammy Watkins and Martavis Bryant, and three of their four most experienced offensive linemen — might reach the future ahead of schedule at one particular position. They were scrimmaging, and Watson was taking what was to be the last snap of the “game.”

“He makes a scramble to the right, rolls back to the left, is about to take off and run,” Morris recalls, “but pulls up right before he crosses the line of scrimmage and throws it back across the field for a touchdown. Everybody just kind of looks at him and goes, ‘Did that really happen?’”

Even with Watson anointed early on as a future star, the coaching staff of the present selected senior and longtime Boyd backup Cole Stoudt to start in Week 1. Watson saw a little action in Clemson’s loss to Georgia, and some more in the Tigers’ blowout of South Carolina State the week after. The next game was Florida State, an early divisional matchup with a chance to (perhaps unfairly) define Clemson’s season.1

With FSU’s Sean Maguire already in for the suspended Jameis Winston, Watson replaced Stoudt in the first quarter, and the Tigers quite nearly pulled off the upset, taking the Noles to overtime. Clemson’s final offensive play was a fourth-and-inches snap that saw Watson line up in his typical shotgun spot and running back Adam Choice get felled short of a first down. The play call seemed baffling in the moment, but in retrospect was both an obvious choice and a necessary reminder of Watson’s inexperience: He had next to no reps operating under center.2 “It’s just a comfort level thing,” Morris says. “I may feel comfortable having the whole playbook in. But if he doesn’t, it makes no sense.”

Regardless of where it was in OT, Watson’s comfort level was deemed sufficient shortly thereafter, and he was named Clemson’s new starter well in advance of last week’s game against North Carolina. Tar Heels at Tigers looked like a perfectly cozy spot to make the switch: a home game, with a pleasant weather forecast, against a team allowing an average of more than 6.5 yards per play. Still, Watson was surprised: “I thought I was going to have to wait my turn.”

Death Valley is not a dead place. It can get downright sepulchral if the wrong team puts the Tigers on the slight end of the scoreboard, but when it’s happy it’s loud, has one of the better entrance stunts in the sport, and is lit like a future Earth in an ’80s apocalypse film, with tens of thousands of orange and purple-clad onlookers producing a kind of radioactive glow. Under this nuclear halo, Morris sent his young charge onto the field last Saturday night with two instructions: “Be calm, and have fun.”

With Watson making his first start, UNC arrived looking like it had a very clear idea of what the Tigers might try: lots of runs and ample feet-wetting opportunities for the wet-behind-the-ears kid. They were rapidly disabused: On the Tigers’ second offensive play, Watson launched a ball to Germone Hopper for a 74-yard touchdown.

“I think that was their game plan,” said Morris in his postgame remarks, “to not get beat with the run.” Credit the Tar Heels there: They definitely did not get beat with the run, holding the Tigers to 92 yards on 44 attempts. There remained, however, the matter of Watson’s 435 passing yards, and Clemson’s repeated second-half defensive lapses that kept Watson in the game and going for more. He hit 10 different receivers in all,3 even the ones North Carolina didn’t leave standing flat-footed in open space.

Asked after the game to pick a favorite from his six touchdowns, Watson smiled and said probably all of them. But had Watson been able to see it rather than hear it from his position on the turf, he might’ve selected his second downfield shot:

Watson’s night of firsts wasn’t over when the scoreboard ticked down to 00:00. Clemson permits fans to rush the field at home games, and as the Tigers and Tar Heels moved to midfield for postgame handshakes, they were engulfed by waves of the faithful. Some clever board operator put the final minutes of Missouri’s upset of South Carolina up on the stadium’s video screens, and the cheering started all over again. Watson navigated the crush of humanity, camera cables, and selfie-seeking admirers as best he could. Eventually, he found his mother. “She was just speechless,” Watson said Monday. “All smiles.”

In the wee hours of Sunday morning, in their postgame media appearances, Morris and head coach Dabo Swinney already found themselves balancing the reality of Watson living up to his hype so soon with the reality that Clemson has two-thirds of a regular season left to play, some tricky conference matchups4 on the immediate horizon, and two losses already in the ledger. Morris is also quick to point out Watson’s errors — a couple missed reads here, an impulse decision that led to an interception there — and says with a straight face, “He probably should’ve had a couple more touchdowns … But you expect that out of a young kid. He messed up a few things, but he’s a freshman. He’s a snotty-nosed freshman.”

Swinney, too, attempted some gentle reining-in — “He’s gonna get coached hard Monday” — but got downright poetical when waxing about Watson’s bullet-time composure: “He makes the game look easy. He makes it look slow. He just kind of floats around … He’s got a lot of improving to do. But he just never flinches. He just doesn’t get frustrated.”

Clemson’s losses to Georgia and Florida State are quality losses, and in a season in which no team looks unbeatable, a prestigious bowl is still very much a possibility if the Tigers avoid putting so much as another toe wrong between now and December. As with any team, of course, there’s plenty that could go wrong.

Eventually, the Tigers will need to mount some sort of rushing attack. The offensive line is thin, and Watson’s not yet of a size that allows him to readily absorb too many hits. But Morris’s barely contained giddiness over Watson’s potential will make Clemson’s offense appointment television for a while, and the thought of Morris’s playbook in Watson’s hands for years to come is a warming one.

“We feel good about our quarterback situation,” Swinney deadpanned Saturday night. “We’re gonna talk about it tomorrow, but I think Deshaun is probably gonna start next week …