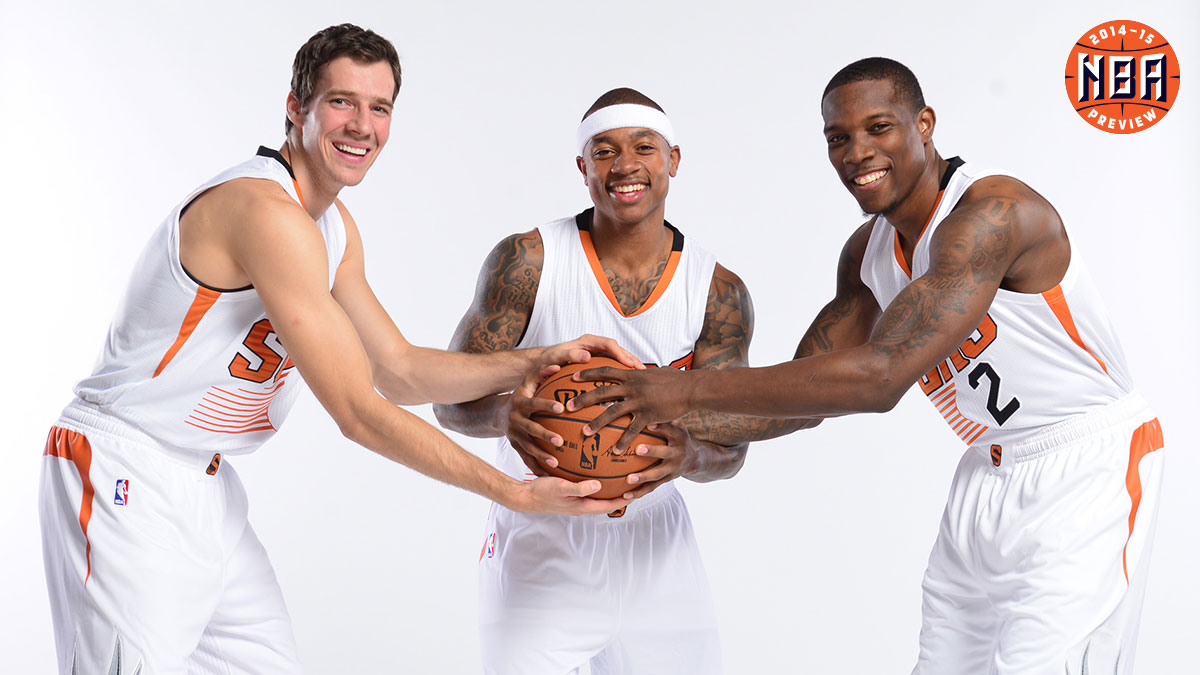 The Suns ran their training camp for a second straight year at Northern Arizona University’s J. Lawrence Walkup Skydome, a stadium 6,880 feet above sea level. To put that altitude in perspective, imagine the Pepsi Center in Denver with the entire landform that makes up Phoenix, Arizona, stacked on top. Strange image; also, you’d still be a couple hundred feet short of how high up this stadium is. Goran Dragic hates it, for obvious reasons, but understands the purpose. It’s resistance training for the body and mind. The team that can’t breathe together believes together, or something.

The Suns made believers out of all of us last season, doubling or tripling their projected win total, depending on whom you ask. They were good enough to foster legitimate optimism about their chances of pulling a playoff upset, if they found their way in. This optimism bled into summer, when, for a fleeting moment on Twitter, the pipe dream of LeBron James playing for Phoenix became almost a Pinocchio-meets–The Secret summoning ritual. Neither of these things actually happened, but that’s the kind of enthusiasm these Suns engender. That’s what happens when your public perception morphs from hopeless bottom-feeder to the most exciting team in the league, in no time at all.

Sure, the Suns go zero to 100 real quick, but last season’s 100 doesn’t become this season’s zero. There is no exponential growth in this league, and that’s why, only one year in, we’re looking at the Suns’ window for prosperity. It’s a question that will continue to bubble up as the series continues: Why peer into the void when it feels like we’re still only at the beginning? Because the NBA is a fickle landscape and, Spurs excepted, precious little is guaranteed. Everything changes. Time is always running out.

Speed was the imperative last season, the first year of the Ryan McDonough/Jeff Hornacek era. The pilgrimage to Flagstaff, Arizona, was the litmus test: Survive camp at this altitude, and you can survive in our system. It worked. The Suns sucker punched teams at the beginning of the season, teams that weren’t able to keep up with the ever-advancing attack of Dragic and Eric Bledsoe. Phoenix started off the season 9-9 before rattling off five straight victories in early-to-mid December, sounding the first of many League Pass alerts.

This season, Hornacek wants to go even faster. The Suns were eighth in the league in pace last year; he wants to be in the top three. Markieff Morris, generously listed at 6-foot-10, has already been told he’ll be spending a good deal of time at center when the Suns “need to speed it up.” A Suns team deploying an undersize center? You don’t say. 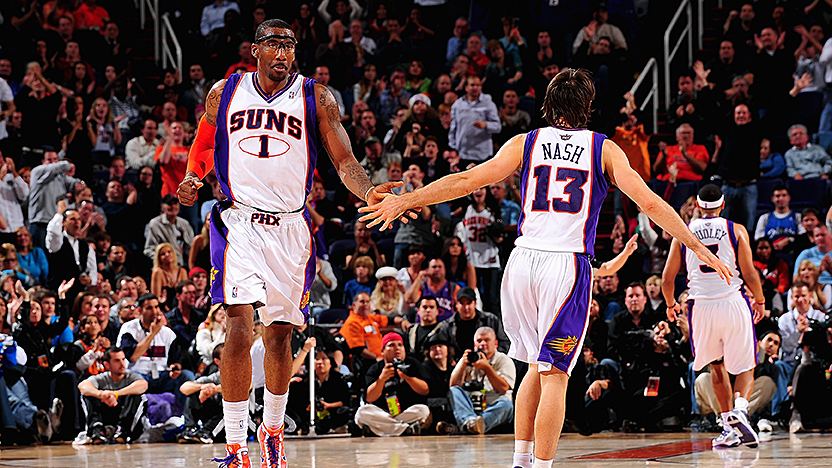 Familiarity played a role in the joy surrounding this new Suns era. Using vestiges of the Seven Seconds or Less days (Dragic, Channing Frye) as anchors, Hornacek was able to re-create the style of his own heyday and mold a team not only in his image, but also in the image longtime Suns fans have grown accustomed to. The team was stocked with long-range threats, athletes who could make plays on either end of the court, and players capable of pushing tempo — the designation of “lead guard” befalling whichever of the two players happened to be speeding upcourt with the ball at that moment.

Most satisfying was the notion that we were finally seeing these players, most of whom had come from less gratifying situations on other teams, at their best. Of the nine Suns players who logged at least 1,000 minutes, six had career highs in effective field goal percentage. Well, technically six. It should be seven — Gerald Green missed his career high of 54.8 by a tenth of a percentage point. That mark was set in 2012, when Green made an improbable return to the NBA as a member of the New Jersey Nets. It’s important to note he sustained his eFG of 54.7 percent last season over the course of 82 games and 2,330 minutes, about three times as many as he played in New Jersey.

Effective field goal percentage takes into account both 2-point and 3-point field goals, weighing 3s more heavily to account for the difference in worth. Those career numbers across the board have to do with increased opportunity and scheme. Thirty percent of the Suns’ field goal attempts came from behind the arc; only four teams surpassed that figure. The Suns also happened to have the second-best 3-point defense in the league, with opponents shooting only 34.1 percent. Making a ton of 3s and preventing your opponent from doing the same seems like a pretty solid formula for a winning season these days.

Staring at the numbers, it appears that last year’s Suns were a perfect storm of unsustainable conveniences. How often are you going to have that many guys playing out of their minds in the same 82-game span? And for how many of those players is that uptick in production going to be the new normal?

The core remains intact for the most part. One set of brothers is reuniting, while another is staying together for the long haul. The prospect of having Bledsoe on the court for an entire season is, in itself, a reason for optimism. As is the luxury of bringing Isaiah Thomas off the bench to keep the offense moving and to keep their two lead guards fresh. Hornacek is eyeing a 32-minute split among his three point guards, which should be more than enough, considering the style of play his system demands.

There was a player who did leave. Unfortunately for the Suns, he might’ve taken their one hope of continuity along with him. Dragic became the team’s undisputed best player, Bledsoe remains their best chance at a future superstar, and Markieff Morris was the team’s unexpected breakout player. But Frye might’ve been the most valuable player to the operation last season. 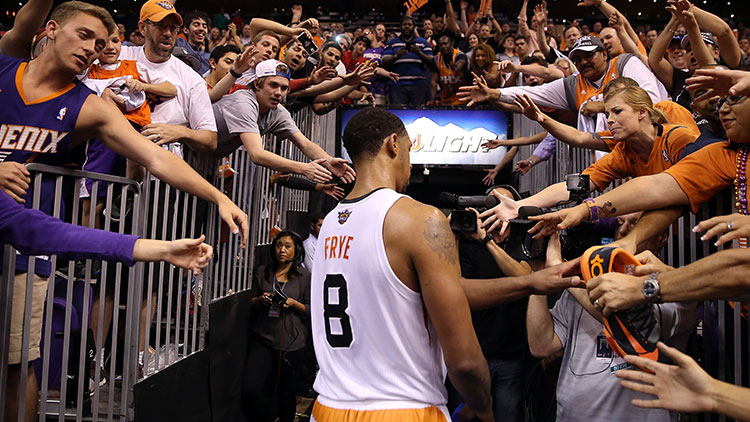 There are fewer than a handful of players in the NBA who combine Frye’s size, floor spacing ability, and competent post defense. When he was on the court, the Suns played like the best offense in the league, scoring 110.4 points per 100 possessions. No rotation player in Phoenix had a better on-court plus-minus. This is a team that won largely because of its prolific 3-point shooting. And it is now faced with the task of replacing the man who made it all possible.

The Suns obviously took more 3s when Frye was on the court, but they also made a significantly higher percentage of them. When Frye was on the court, the Suns made 39.3 percent of their 3-point attempts, per NBAwowy, a percentage that would put them right there with the Spurs, at the top. With Frye off the court, that percentage plummeted to 33.7 percent, a bottom-five figure. Take away Frye, and you’re left with a bunch of stray lightning bolts, without a rod to cull them.

There is no one-to-one replacement for Frye. The Suns signed Anthony Tolliver in hopes he might be able to approximate the role, especially after shooting a career-best 41.3 percent from 3 last season with the Bobcats. But at 6-foot-8, Tolliver’s not a threat to draw attention from defenders, nor is he a formidable presence on defense. Perhaps they’ll see how the ever-improving Markieff Morris might work as a Frye stand-in, but he’s never been much more than a league-average shooter from distance, and, as Zach Lowe outlined a few weeks back, there are other things the Suns need him to do.

Frye’s departure also robbed the Suns of their most productive duo. Of the 22 tandems that played at least 750 minutes last season, Markieff Morris and Frye were by far the best. When the two were on the floor together, the Suns were scoring 115.4 points per 100 possessions, with a net rating of 11.6 — easily the best numbers of the lot. Dragic and Bledsoe came in second with 11.0. So yeah, Channing Frye is kind of like The Book of Eli, except massively important.

This isn’t so much about a window of opportunity closing immediately as it is about a cautious tempering of expectations. It won’t be easy to pick up where last season left off, because a very central element of the team’s identity has been compromised. Perhaps some of the pressure will be heaped upon the shoulders of second-year center Alex Len, who studied Pau Gasol during the FIBA Basketball World Cup and hopes to flash more of Gasol’s midrange game. The Suns still have the talent and flexibility to be very, very good, but it might take months of experimentation to figure out how to work in new solutions to fill the Frye void.

A bit more somber is the thought that the perfect storm has passed. That the kind of season the Suns brought us last year was intrinsic to that year, and that year alone. It was like a season-long rebuke of just how low our expectations were. We all want that joy to return this year, but maybe it’s worth coming to terms with the possibility that, however good the Suns become, it might never feel like that again.