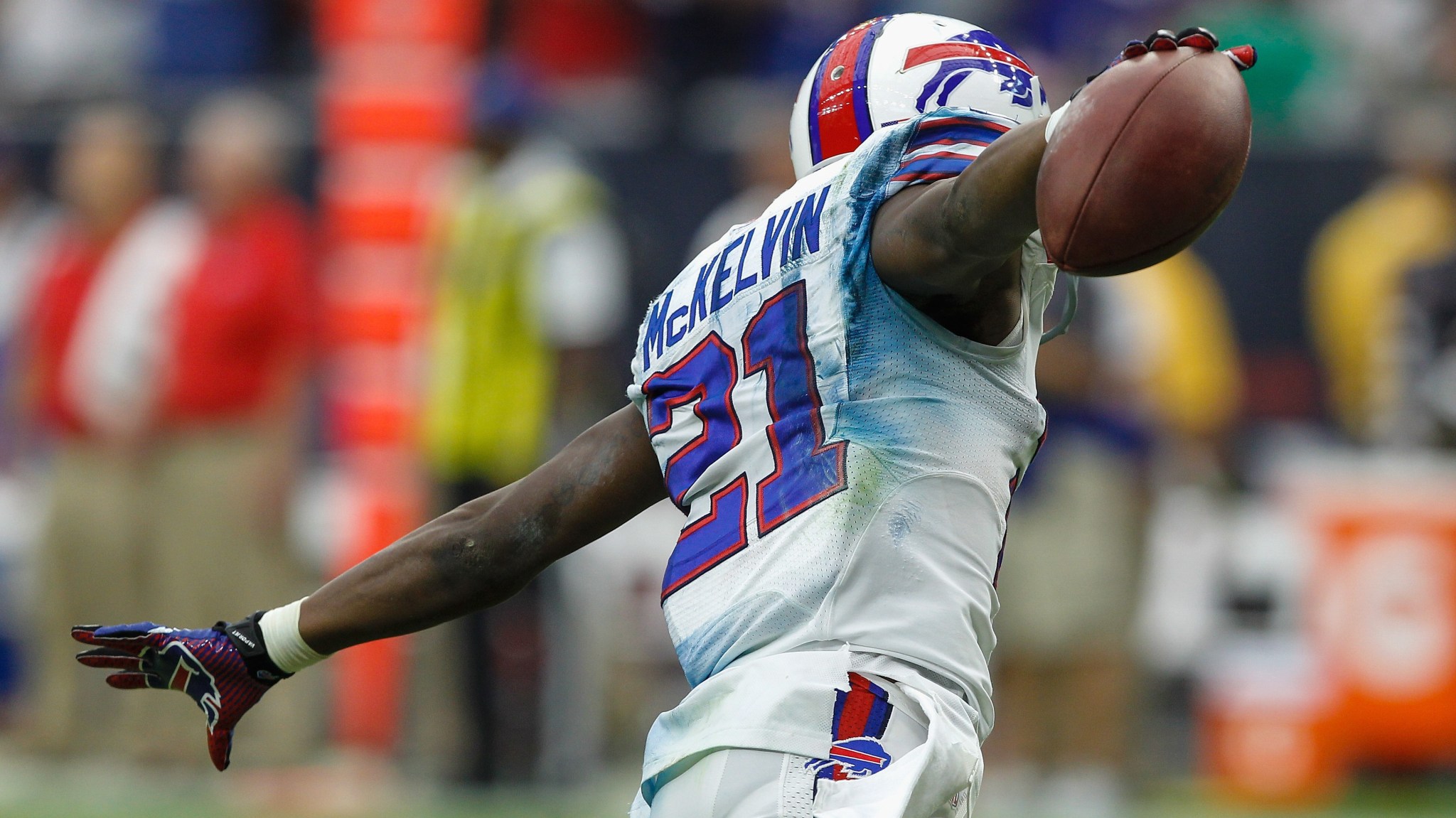 There are two ways of looking at the franchise-altering choice that Bills coach Doug Marrone made earlier this week. The first is the depressing way, the “Oh, those Bills” way. Yanking quarterback EJ Manuel is, undeniably, an admission of failure. Only 17 months have passed since Buffalo made Manuel the 16th pick in last year’s draft, and Manuel is already headed to the bench — another name to join Johnsin, Losman, and Edwards on the list of QB futility that’s defined the post–Jim Kelly Bills.

Having to abandon a first-round quarterback 14 starts into his career would be a concession for most teams, but Marrone’s choice to hand the ball to Kyle Orton isn’t the Bills’ version of waving the white flag. It’s actually their way of bearing down.

The Patriots are a mess. The Dolphins ransacked the Raiders last week, but Miami is a week removed from its own quarterback drama. The Jets are still mired in theirs. The division is up for grabs, and with an ownership change in Buffalo, Marrone’s job probably is too. A division title would be enough for him to keep it. The Bills can win the AFC East. And they know it.

Despite the quick hook, the move shouldn’t be a surprise. As recently as late July, it seemed like Orton wasn’t even interested in playing football. He hadn’t shown up for any of the Cowboys’ offseason work, and he went the entire spring without returning calls or texts from his quarterbacks coach. Dallas released him days after Orton visited with team officials, a sign they weren’t convinced he wanted to stick around. A month later, Orton signed with the Bills. Whether it was money or a shot at playing time that coaxed him to Buffalo is tough to discern, and no one’s talking. But in this case, they go hand in hand. The Bills gave Orton more than $5 million this year — both a nice raise and a sign he would have a real chance to play.

That chance is here because Manuel was bad enough — and the rest of the Bills were good enough — to make it happen. The strength of this team lies in its defense. The Bills defense took a massive jump a year ago, from 27th in DVOA in 2012 to fourth last year. At least part of the credit went to Mike Pettine, who left Buffalo this offseason for the head-coaching job with the Browns. After losing Pettine and Kiko Alonso (to a torn ACL) before the season, it would have been reasonable to expect the Bills to take a step back. Well, so far, that hasn’t really happened.

Buffalo is ninth in defensive DVOA through four games, and against the run the Bills have caused widespread destruction. Only the Seahawks have allowed fewer yards per carry, and only the Cardinals have a better DVOA defending the run. Last week, Buffalo held Houston’s running backs to 15 yards on 17 carries. That actually happened.

None of that is hard to believe considering who the Bills have along their defensive line. Marcell Dareus, Kyle Williams, and Mario Williams have laid waste to opposing offensive lines, and third-year linebacker Nigel Bradham flies up against the run like a hawk out of the sky. Outside of Kyle Williams — who might be having the best season of his career, which is saying something — the Bills pass rush hasn’t been quite the force it was a year ago, but that’s to be expected without the varied looks that are Pettine’s specialty.

Overall, Jim Schwartz has done an impressive job of switching schemes and carrying over much of what made the Bills a very good defense a year ago. The pass defense isn’t quite on the same level, but there’s plenty to like there too. After having to play next to super-safety Jairus Byrd last year, converted cornerback Aaron Williams looks comfortable with his move to free safety. One confusing choice has been the Bills’ insistence on starting Leodis McKelvin opposite Stephon Gilmore at cornerback. In McKelvin’s absence during the first couple of games, Corey Graham was the team’s best defensive back. Since McKelvin’s been back, Graham has been limited to only a handful of snaps a game.

It’s a small complaint. Against everyone but the superhuman Philip Rivers, this defense has looked like something that isn’t worth wasting. And that’s where the Bills had gotten with Manuel.

His numbers to start the year were strong, but from the beginning, it was obvious how Manuel might hold this offense back. He completed 58 percent of his passes, and that was with Marrone providing him a diet of easy throws. Bills running backs have 31 catches through four games — more than any other team in the league — and those make up more than 40 percent of Manuel’s completions.

Whenever Manuel was asked to do anything more, it got ugly — especially on intermediate throws. Between five and 10 yards past the line of scrimmage, Manuel completed just 56.5 percent of his passes. Only the Cardinals and Vikings were worse, and most of that work was done by de facto backup quarterbacks, a club to which Manuel now belongs.

Manuel’s brand of bad was particularly maddening because of the group the Bills have put together around him. We were about a week away from an “Is Sammy Watkins open?” Tumblr site. Here’s a hint: Sammy Watkins is always open. Going back and watching the tape of Buffalo’s game against the Texans was brutal. Every time Watkins streaked across the middle of the field, the ball seemed to hit him in the knee, or ricochet off the fingertips of an outstretched hand. 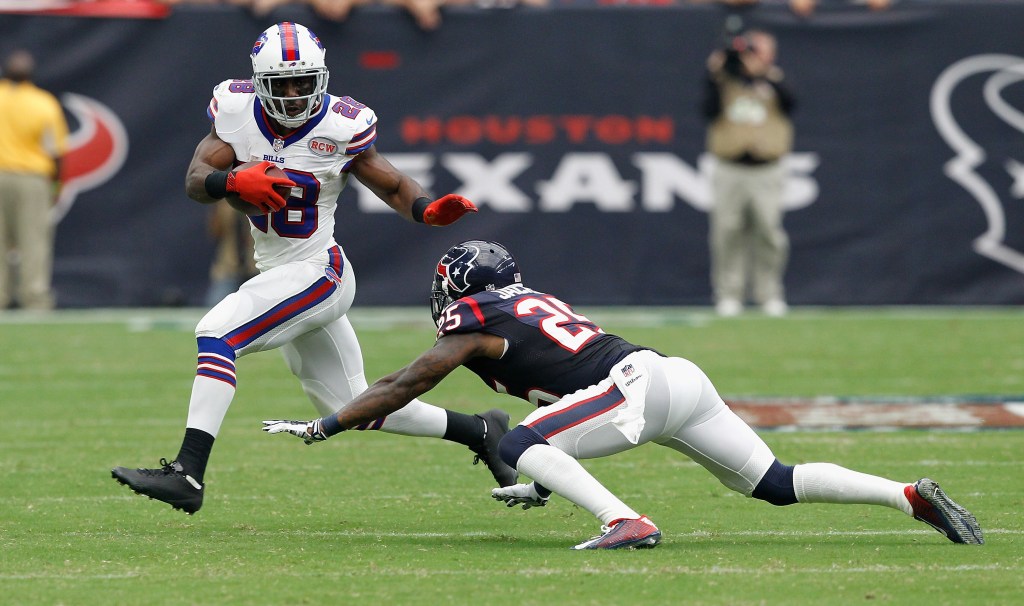 Trading away future first-round picks, as the Bills did to get Watkins, is almost never a good idea — but it’s already done. Buffalo paid a superstar price for Watkins, and luckily, it may have gotten one. But the best part about the move for Watkins is that he wasn’t the first ingredient in the Bills’ sundae. He was the cherry. Fellow Clemson Tiger C.J. Spiller looks like his old, defense-torching self, and Robert Woods and Mike Williams are quality secondary receivers. Running back Fred Jackson may be immortal.

That’s not to say that swapping out Manuel for Orton turns this into a top-10 offense. The Bills still have an offensive line that I’ll politely refer to as “objectionable.” Right tackle Seantrel Henderson isn’t like most seventh-round rookies, in that his talent has been lauded ever since he was one of the best high school players in the country. But he’s still a seventh-round rookie, and despite some impressive moments, he has often looked like one. Marrone might be better served using another rookie — Cyril Richardson, another big man with massive promise and plenty of question marks — at left guard, but Buffalo will likely stick with retread hero Chris Williams longer than it should. And then there’s right guard Erik Pears, who, after last week, will be seeing J.J. Watt in his nightmares for the rest of time.

Even with the occasionally porous front line, there’s more than enough firepower here to field a quality offense. Now, they might have a quarterback to take advantage of it. “Since we have a 10-year vet, a guy that can get the ball down the field, now it’s on the wideouts,” Watkins told Post Standard beat writer Matthew Fairburn earlier this week.

Well, now it’s on everyone. The spirit of that quote, and of this entire move, is that the Bills have now done all they can. Every personnel choice the franchise has made in recent months has been made under the specter of changing ownership. Fittingly, this is the last week the Wilsons will officially own the Bills. On Monday, Terry Pegula & Co. will likely take control, just as we’ll be reacting to Orton’s first start. The Bills have acted all offseason like a team that needed to win now, and for Marrone, this was the final piece of that plan.

Orton is not and never has been a great quarterback, but the Bills aren’t looking for great. They’re looking for passable. Not counting his disaster of a rookie season, when Orton was shoved into duty for an injured Rex Grossman, he’s completed 60 percent of his passes while throwing for 6.9 yards per attempt. Those numbers line up almost exactly with league averages over the past decade. Kyle Orton is the face of unspectacular quarterbacking, and that — even more than the mustache — is what makes him the perfect face of these Bills.