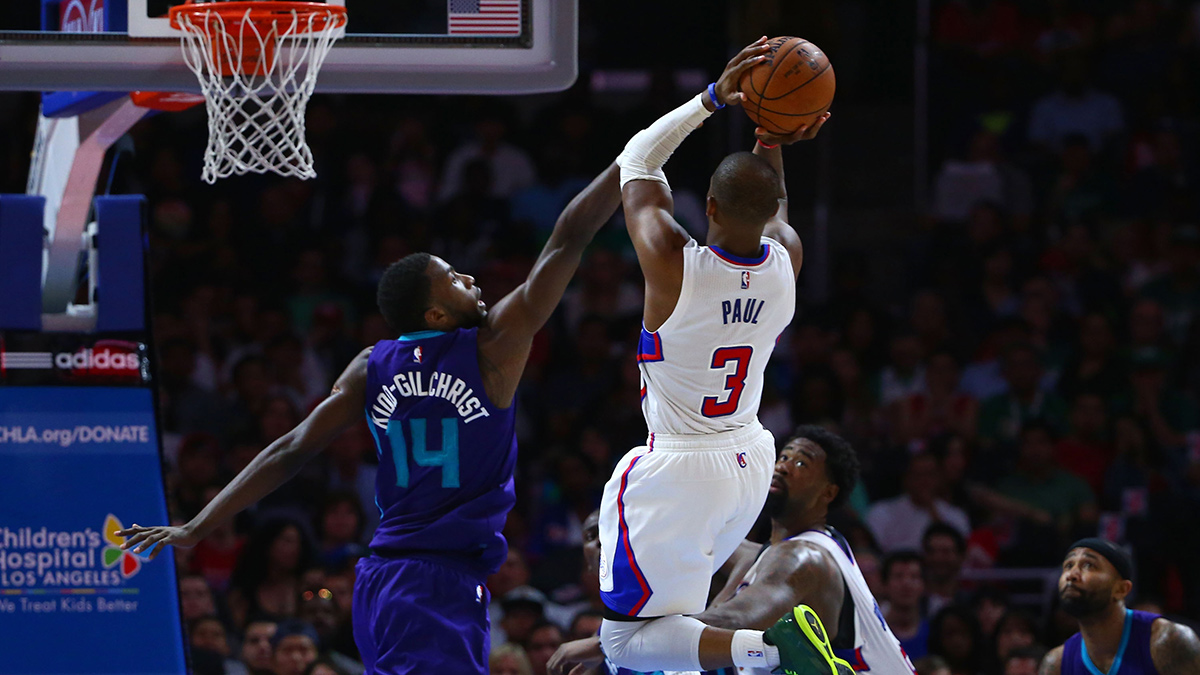 The 2015 Charlotte Hornets that emerged from the shit-cocoon of fall 2014 were easily my favorite team to watch last season. But it wasn’t because they were fun. They weren’t any fun at all. They were thoroughly unfun. Their incapacitating defense was matched only by their incapacitative offense. The team’s offense generated the opposite of spacing, which I guess means the team itself was antimatter. They turned Pyrrhic victories into an art form. Last season, the team won an overtime game with a final score of 80-71, the lowest-scoring overtime game in the 60 years of the NBA’s shot clock era. The Hornets were deeply, intrinsically flawed, but for a very brief period, they managed to stay afloat by playing unlike anyone else in the league. They were the misshapen, unsolvable Rubik’s Cube that lodged itself in my heart. But after this past weekend and yesterday’s news, I’m going to go ahead and throw it in the trash. This year’s Hornets are going to be bad, and not the kind of bad I’ve come to love and admire.

With about 46 seconds remaining in the first half during Saturday’s preseason game against the Orlando Magic, Hornets wing Michael Kidd-Gilchrist separated his shoulder as he was fouled while moving around his defender. He was diagnosed with a torn labrum, and the surgery will force him to miss the next six months, cruelly slotting his earliest return right around the start of the postseason, which the Hornets are almost assuredly not reaching.

This will be the third consecutive season in which Kidd-Gilchrist misses more games than the last. In his first three seasons, he’s missed an average of 17 games a season. If you like to connect dots, you might find yourself, like I did, relating MKG’s string of unfortunate events to his stylistic forebear and fellow Charlotte basketball great. Gerald Wallace, in his six full seasons in Charlotte, averaged 14 missed games per season, with injuries from concussions to broken ribs to partially collapsed lungs. Like Kidd-Gilchrist, Wallace’s distinct kind of brilliance had already been lost in the margins as a result of playing on awful teams in Charlotte. The succession of untimely injuries only added to his obscurity. Yet even though Wallace is widely considered the best player to play for the Charlotte franchise, he never had the monumental on/off impact that Kidd-Gilchrist has.

Maybe you’ve seen the numbers. Last season, among Hornets who played at least 30 games for the team last season, only MKG and Cody Zeller logged a positive net rating, and Kidd-Gilchrist’s was more than double Zeller’s. As Yahoo’s Dan Devine pointed out in his MKG reaction yesterday:

When MKG was off the court, though, Charlotte got outscored by a whopping 333 points in just under 2,400 minutes, an average of 7.7 points-per-100. In effect, then, having MKG in the lineup was the difference between the Hornets performing like the 55-win Memphis Grizzlies and the worst-season-in-franchise-history Los Angeles Lakers.

Michael Kidd-Gilchrist is the team’s best and most important player. Full stop — no need to throw the word “arguably” in that sentence, which only serves as a slight hedge to appease those who might balk at MKG’s uninspiring per-game numbers. A team’s top scorer isn’t always the team’s top player. This goes for all teams, but especially a team as lopsided as the Hornets, who managed to be one of the three worst offenses in the league while playing top-five defense since the start of 2015. You don’t judge a fish by its ability to climb a tree, I think is the saying.

Yes, MKG isn’t a very good offensive player in the traditional sense, but it would’ve been fun (maybe — again, we’re talking about the Hornets) to see how he would be deployed with their current rotation. As I noted in an NBA draft preview about the “shifting inequalities” of the league, there is finally room for Kidd-Gilchrist to be utilized as the player he is rather than the player certain positional archetypes require him to be. He will never be a good 3-point shooter. Hell, he might never be any kind of 3-point shooter — he had zero attempts last season. But he was excellent with his cuts to the rim and became a solid enough midrange shooter to keep a defender at least within an acre of him. With the additions of first-rounder Frank Kaminsky and Spencer Hawes, both excellent perimeter shooters and passers for their size, it would’ve been nice to see how the Hornets deployed MKG in a sort of inverted offense. Alas. Charlotte will have to thumb through its entire roster — Jeremys Lin and Lamb, P.J. Hairston, Aaron Harrison, Elliot Williams, and others — for someone who will stick at the shooting guard position. 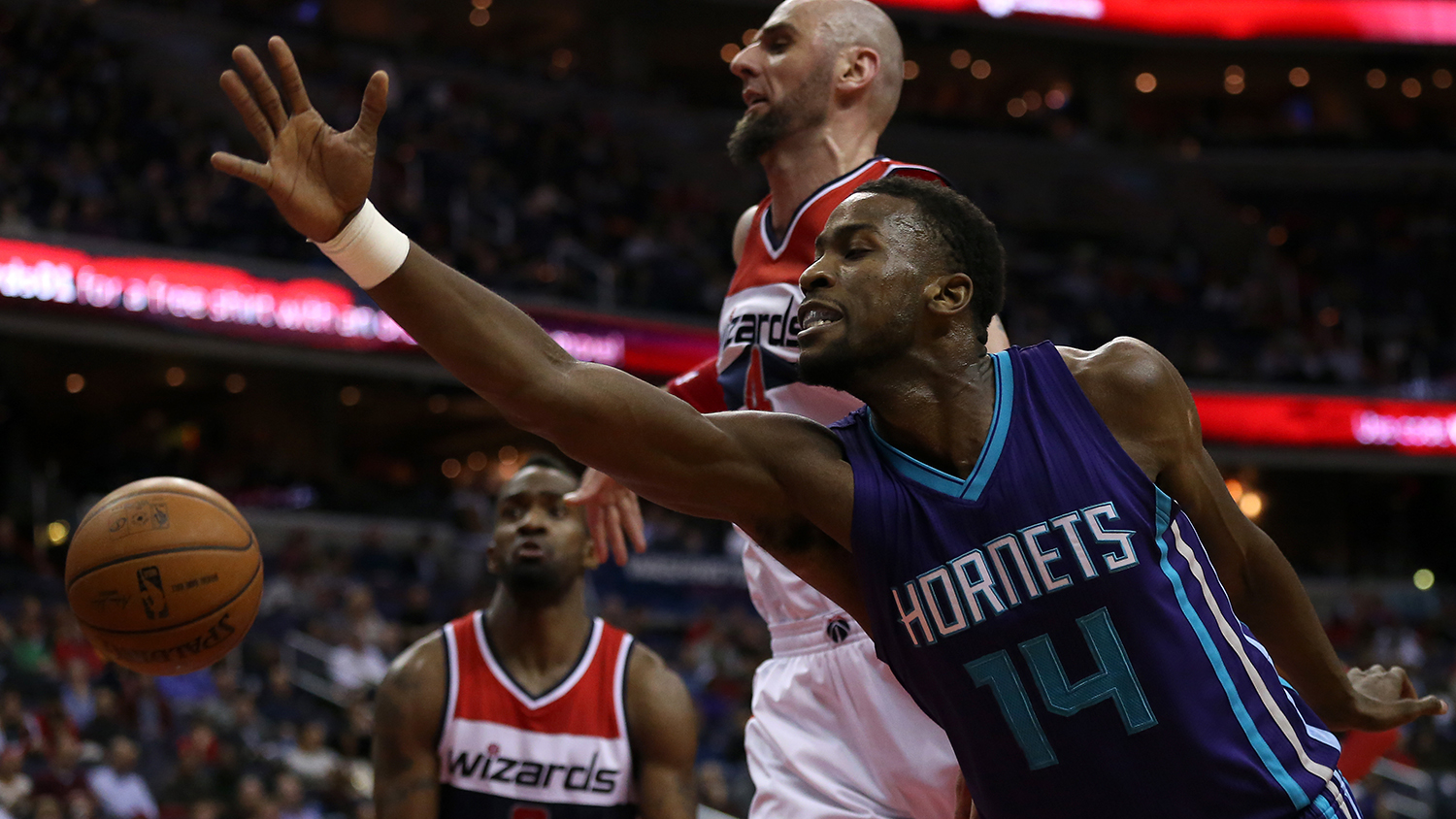 But how this injury affects the team’s offense isn’t the issue here. Kidd-Gilchrist is one of the rare defensive geniuses in the league, capable of ostensibly running point on the defensive end. Hornets head coach Steve Clifford rebuilt a defense that played with a mob mentality, and as MKG told Rick Bonnell of the Charlotte Observer, “I’m the leader of that. I’m starting to understand how important I am to this team at the defensive end. Being all tied together is so important.”

One of the main ways this interconnectedness revealed itself was in Charlotte’s defensive rebounding philosophy. At 79.3 percent, the Hornets had far and away the best defensive rebounding percentage in the league, which was entirely by design. In the Hornets system, all five players are committed to securing the board. No leaking out — the defensive possession doesn’t end until the ball is secured. Kidd-Gilchrist is a fantastic rebounder for his position, but, as with everything else he does, his impact on the defensive glass isn’t measured by the numbers he himself accumulates. When Kidd-Gilchrist was on the floor, the Hornets were able to secure 82.4 percent of all available defensive rebounds, nearly three percentage points higher than their already league-leading rate on the season.

True to their name, the Hornets swarmed the interior last season, opting to let their opponents kill them from midrange. Charlotte allowed the fifth-fewest shot attempts in the restricted area in 2015 while also denying short corner 3s. With a boulder like Al Jefferson in the middle and a cadre of young bigs around him, it’s easy and sensible to pack the paint to prevent easy baskets around the rim. But the team’s ability to accomplish that in addition to patrolling the corners demands a player like Kidd-Gilchrist, who can control the defensive tide as it ebbs and flows from the interior to the closeout on the perimeter.

Please note that Kidd-Gilchrist finished ninth in Defensive Player of the Year voting last season and couldn’t get a single first-place vote. We’re about to see just how much a single player can affect a defense. What does it look like when the main adhesive keeping a cast of unremarkable defenders is stripped away? The heart says catastrophe.