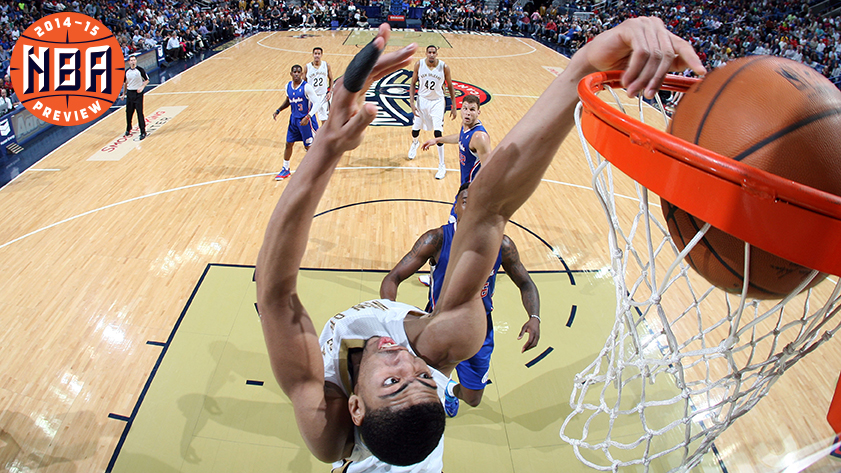 The past few weeks have seen hundreds of NBA preview articles, and that’s just on Grantland. But there’s one topic we haven’t really touched on yet: Anthony Davis and the Pelicans.

When people say they don’t watch the NBA regular season, it makes sense. You have to love the NBA in an unhealthy way to watch games every single night for six months straight. Eventually, skipping a few weeks doesn’t count as apathy, it’s just common sense.

But there are exceptions to this rule. This is where the Pelicans come in.

The NBA tips off tonight with Mavs-Spurs and Rockets-Lakers on TNT, but I’m more excited about Pelicans-Magic on whatever random Fox affiliate is broadcasting them on League Pass. This isn’t because I’m some kind of hard-core NBA hipster searching for underground pleasures in the 600 channels. It’s because watching Anthony Davis play basketball is as simple and obvious as sports get.

Everything you need to know about the coming season.
Just watch him teleport down the court in four steps. Watch him dunk all over someone’s front line, then come back a few plays later with an 18-foot jump shot that’s completely unblockable. Then go to the other end and watch the blocks that make playing against him look that much more impossible. At least a couple of times every game, he melts your brain in a way that only sports can.

He’s Yasiel Puig throwing someone out from 300 feet away.

He’s Alex Ovechkin scoring goals from his back.

At 20 years old last year, Davis averaged 21 and 10 after the All-Star break. He also had 28 and 8 in 26 minutes against the Thunder a few weeks ago, but it’s not even the numbers that matter. Zach Lowe talked to the Pelicans last year and later wrote, “They’re trying to mold Davis into some unholy amalgam of Nowitzki, Hakeem Olajuwon, and whichever pick-and-roll smasher you prefer.”

Nowitzki crossed with Olajuwon sounds right, mostly because that’s a player you can’t really imagine. And that’s Anthony Davis. He’s a living, breathing League Pass advertisement. You have to see him every week to remember that he’s real.

Basically everyone on earth has tabbed this as the year Davis breaks out and turns into a superstar. And maybe that’s what’ll happen over the next six months. Vegas has the over/under for Pelicans wins set at 41.5, and the over feels smart.

When the nucleus was healthy last year, New Orleans was better than people realize. Tyreke Evans was rejuvenated over the final few months, and this season we might even get a full year of Jrue Holiday and Eric Gordon together. They added Omer Asik over the summer, and together with Davis, he should make life miserable for big men. There are questions about Monty Williams, but if Monty makes you skeptical, Anthony Davis should make you confident. In Kevin Durant’s first three years, he won 20 games, 23 games, and then the Thunder won 50. At some point, a superstar renders all other concerns irrelevant.

Speaking of winning, there will come a time when we’ll forget to be so amazed by all this. In a few years, we’ll start wondering if Anthony Davis can carry a title team, the same way we used to wonder about LeBron. Or we’ll wonder if he’d ever leave New Orleans, the same way we wonder about Kevin Durant. It will be complicated — the same way everyone wound up questioning Ovechkin’s leadership, Puig’s maturity, or Dez Bryant’s temper.

That may seem like some kind of whiny media criticism, but it’s not. Arguing about sports all day is half the fun of watching games at night. Eventually, all the best players get thrown into the mix. It comes with the territory. It’s also even more reason to enjoy Davis this year.

The Pelicans have no pressure in the West, Davis has nobody wondering about his clutch genes or offseason plans, and all we have for now is the self-explanatory side of watching sports. Everyone can shut off their brain and watch someone do something special.

If someone asks me to defend 82 games of NBA basketball, I’ll never be able to do it with a straight face. There are too many games,  and too many teams, and nobody has time to care about this stuff on a nightly basis. But if you’re asking me why I’ll always pay attention anyway, it’s because every few nights you’ll see something that defies belief. No sport on earth highlights incredible athletes doing incredible things better than pro basketball, whether it’s LeBron against the Bobcats, or Durant in January, or what happened with the Thunder and Warriors last November. It all happens in an 82-game vacuum, and these moments get forgotten when it’s time to argue about the playoffs, but that’s OK. The regular season is where we just appreciate incredible for incredible’s sake. And in 2014, nobody personifies this better than a 21-year-old power forward for the Pelicans.

League Pass is free this first week, and some random Fox affiliate is waiting for everyone at eight o’clock. Let the year of Anthony Davis begin.

The Jonah Keri Podcast: What to Watch for in Game 6, With Jayson Stark and Dave Cameron