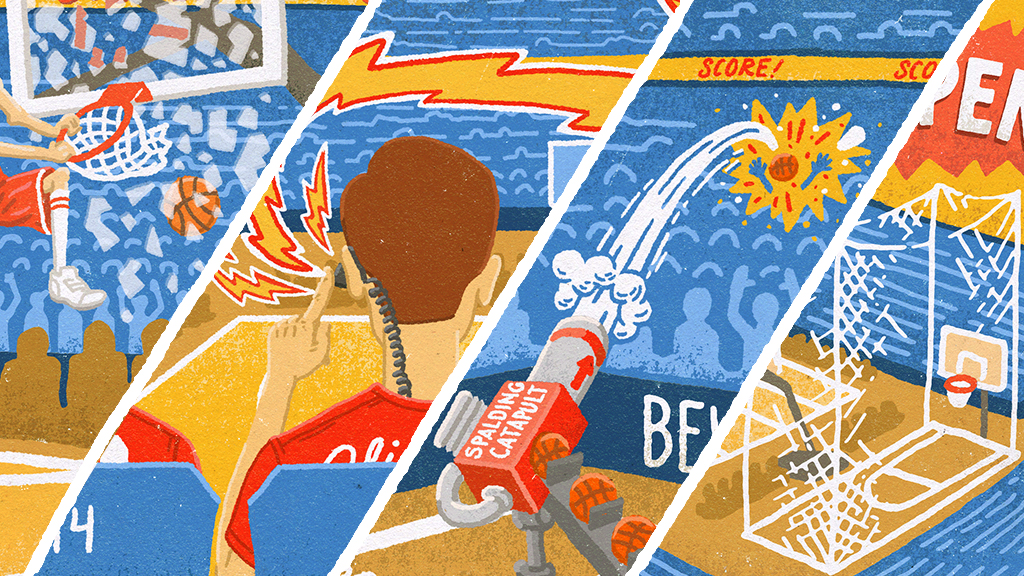 The following NBA Half-Baked Ideas are ordered from most plausible to most “C’mon, Wildes.” Warning: These ideas are not fully baked.

Old friends are like cacti. They’ve grown prickly and don’t need much attention. Your relationship with your cactus friends can survive on a diet of monthly texts, seasonal fantasy drafts, and yearly pictures of your kid dressed as an elf. But to keep the relationship healthy, you need one more ingredient: the random all-in weekend hangout.

When you’re moderately young, most of these hangouts happen at weddings. After laughing with Old Pal A at the gazebo, you strut to the bar, and “Voilà!” Old Pal B appears out of thin air!

Then that stops happening. You get older. Wedding season dries up. Everything needs to be planned. Seinfeld lied. Elaine never rings the buzzer.

Everything you need to know about the coming season.
Most old people embrace this. They don their worst shirts and go to Vegas or break out their worst jeans1 and go to the Super Bowl. I don’t want to do either. I want to go to the NBA Finals.

Problem: I don’t know where the NBA Finals are going to be.

Half-Baked Idea: Hold the First Four Games of the Finals at a Neutral Site

The NBA could roll out the same city-takeover strategy employed by the Olympics, the Super Bowl, every NCAA championship, and, yup, NBA All-Star Weekend.

I’m good with any of these. Tweet @grantland33 with better ideas. 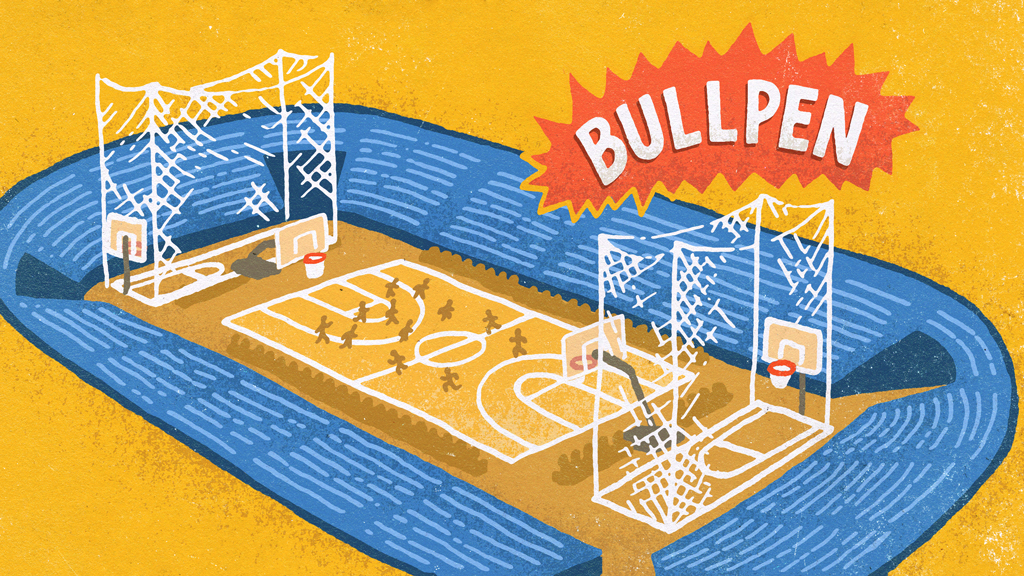 I discussed this idea with Bill on a recent podcast. Here’s an excerpt of the email I wrote Mark Cuban:

I’m doing a Half Baked Idea podcast for Grantland and I wanted to see if this idea was brilliant, stupid, or somewhere in between. Since you seem to appreciate new ideas, I figured I’d ask you. It’s called the Basketball Bullpen. The theory is that a team’s bench players would perform better if they had an area to take jumpers before hitting the floor. No different than an on-deck circle, a baseball bullpen, or those sad nets that field goal kickers use. Some premium seating would be lost, but it doesn’t seem like an insurmountable problem for a talented designer. Is there any glaring reason this wouldn’t work? In the ongoing quest for an edge, isn’t this the ultimate home-court advantage? I know you’re busy, so I appreciate your time. Keep up the good work.

Cuban didn’t dig the idea, but I’m back like a Shark Tank rejectee. And this time, we commissioned a drawing. 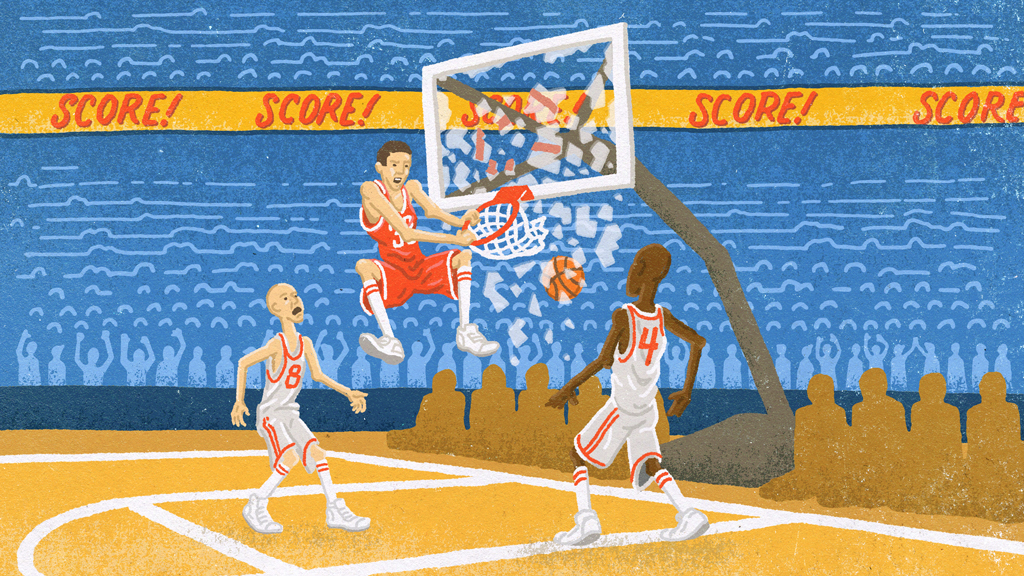 Executive: “Um, Mr. Silver. You know how you said that you’re always looking for ways to improve the game? Well, I just was thinking … um … like, wouldn’t it be amazing if every once in a while the backboard would shatter like the old days? I’m not saying every game. But like once a month. Wouldn’t that be awesome? Like a little ticker tape parade of glass. You know, like, ‘Here’s Blake on the breakaway … OH! It’s raining glass! Hallelujah! It’s raining glass. Hey! Hey!’ But, you know, make it safe. Like, have you ever read the Steve Jobs book? When Steve Jobs goes to Corning and the boss is like, ‘I’m sorry, Steve, I can’t make that much glass for your new phone.’ And then Steve Jobs is like, ‘No, dude. Don’t be afraid. Believe in yourself!’ And he did! Let’s do that but in reverse. We find breakable glass. Maybe that Hollywood glass they use in old Western bar fights. We’ll make it safe and come up with some Transformers-looking contraption that replaces the whole backboard in about 15 minutes.” 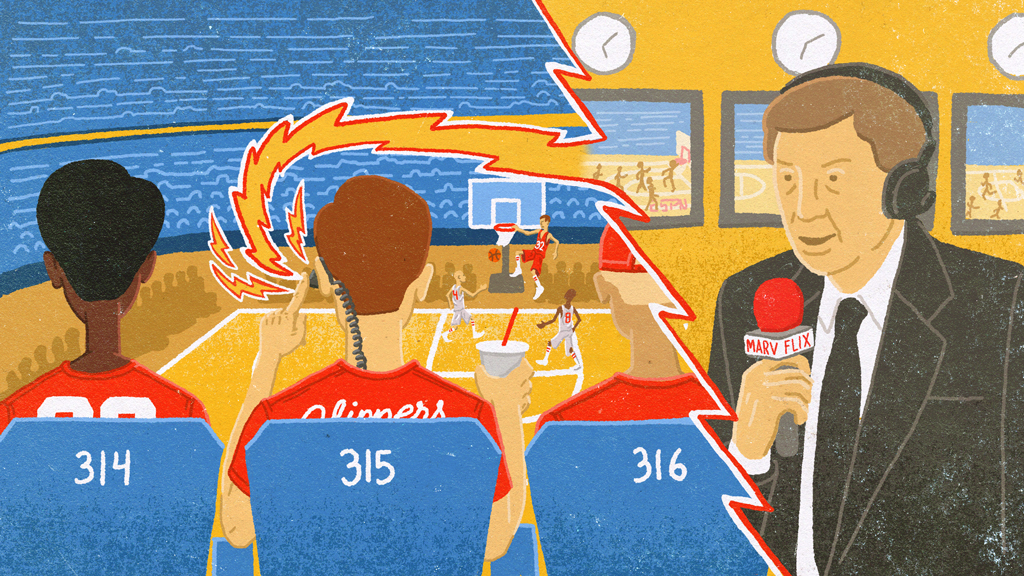 I went to the U.S. Open and received a Bluetooth-y earpiece that keyed me into John McEnroe’s television broadcast. The device quadrupled my enjoyment of the match and made me think the broadcast was disconnected from the television experience. Then I thought of three questions.

Enter Marv-Flix. The idea here is that, at the end of his contract, American treasure Marv Albert becomes an independent contractor. Instead of sitting courtside, he’d cut a deal with the leagues to pump camera feeds into his private studio. From there, Marv would broadcast games to subscribers over the Internet for a monthly fee. Sync your phone to your television and have Marv broadcast everything from Pelicans-Thunder to Election Night 2016.

And now for the moment you’ve been waiting for. An idea so bizarre and poorly thought out that it makes you think, This is so stupid it just might lead to lawsuits. 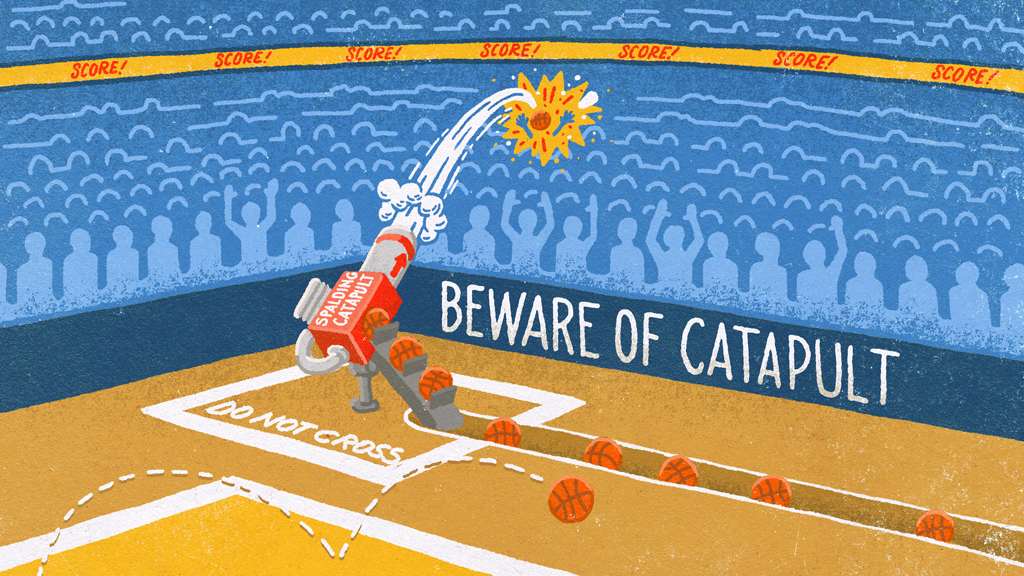 Pretend baseball was never invented and pretend we’re friends. While we’re at it, pretend that you invented baseball this morning. You rolled out of bed and had every aspect of baseball figured out. We met at Starbucks, you ordered an iced coffee even though it’s fall, and then you explained baseball to me.

I’m buying it. Big time. This is going to be huge. One question: “What happens if the ball ends up somewhere that isn’t on the field?” You say, “Oh, man. I was thinking that these 100 mph cannonballs would go flying into the stands and people would largely be cool with it. Obviously that won’t work. Forget it. Forget I ever mentioned the idea of baseball. What were you saying about Jon Snow’s parents?”

Baseball is the only sport in which spectators are tasked with the same goal as the defense. It’s the equivalent of having to tackle Marshawn Lynch while you’re getting nachos. Fans agree to baseball’s proposition because of the intoxicating lure of the free souvenir. Basketball has no such system, and thus no in-game souvenirs.

The Spalding Catapult uses a gutter-ball inspired collection system to round up bad passes, bricks, and blocked shots. The balls are fed into a corner of the arena, loaded into the catapult, and launched to fans in every tier.

Storage might be a problem but I’m sure it could be squeezed in between the replacement backboards and the basketball bullpen.

Kevin Wildes is a senior coordinating producer at ESPN.

#HotSportsTakes: It's Heart vs. Hype, and Colt McCoy Is Winning