The Boise’s Back in Town: Get Ready for the Return of College Football’s Great Postseason Debate 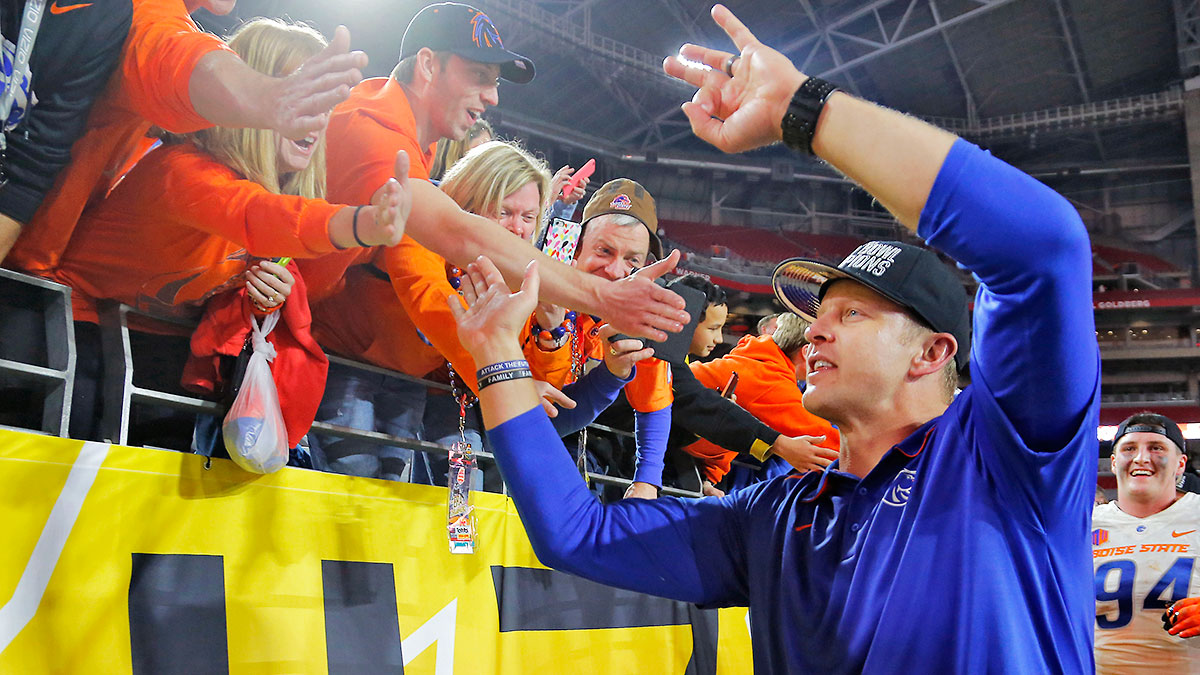 Two years ago, Washington trounced Boise State, 38-6, in both teams’ season opener, which looks like exactly the kind of result you’d usually expect from a collision between Pac-12 and Mountain West teams. In this case, though, the final score seemed to signal an impending sea change on both sides. For Boise, the standard bearer for underdogs and giant killers everywhere, the 32-point margin marked its worst defeat under then-head coach Chris Petersen by a mile1 and stood as sobering proof that the window on the Broncos’ BCS-busting heyday had slammed shut. For Washington, the West Coast’s resident sleeping giant, the blowout marked a return to the national polls and foreshadowed the end of a decade of irrelevance.

The rest of the 2013 campaign confirmed that initial impression: Boise State limped to an 8–5 record, its worst since the dark ages of 1998, and one capped by another lopsided loss at the hands of a Pac-12 also-ran in the Hawaii Bowl; meanwhile, Washington saw the promising start through to a 9–4 finish, its best since its last Rose Bowl run in 2000, and landed in the final AP Top 25 (at no. 25) for the first time since 2001. The divergent trajectories were only reinforced that winter when ascendant Washington coach Steve Sarkisian left for the top job at USC, allowing Petersen — who’d spent his entire Boise tenure up to that point shooing well-heeled suitors from his doorstep — to finally make his move, filling the vacancy in Seattle. With the architect of the Broncos’ astonishing run wearing purple and gold as the calendar turned to 2014, all signs pointed to a renaissance at Washington and a continued backslide into mid-major obscurity for Petersen’s former team.

So understand, given that backstory, the irony of Petersen returning to the blue turf tonight to find his old team, not his current one, ranked in both major preseason polls2 and listed as decisive, 13-point favorites in the teams’ 2015 season opener. In fact, Boise State enters the rematch of the 2013 debacle in much the same position under second-year coach Bryan Harsin that it used to relish under his more decorated predecessor: first as a threat to humble an ostensibly bigger dog on a national stage, then as the overwhelming favorite to win the Mountain West and possibly run the table against the friendliest schedule of any ranked team, and, finally, as a threat to reignite the old debate about which teams deserve to be a part of the national championship conversation.

Admittedly, any suggestion of an impending playoff push might sound a bit grandiose when discussing an outfit that is only barely ranked and hasn’t generated much preseason buzz after flying well under the radar for most of 2014. Last year, Boise faced modest expectations in Harsin’s debut and was immediately dismissed from the national consciousness thanks to an opening-night loss to Ole Miss; that was followed a few weeks later by a 28-14 lapse at Air Force that dropped the Broncos to 3-2 before the end of September. They resumed winning from there, but didn’t manage to sneak into the Top 25 until the final week of November, and were never in line for the major bowl bid reserved for the highest-ranked team in the so-called Group of Five conferences until Marshall’s undefeated season was (narrowly) broken up the day after Thanksgiving, putting Boise into poll position. To that point, Boise’s best win was over an injury-ravaged BYU squad that went on to finish 46th in Football Outsiders’ F/+ rankings.

Given a shot to prove their worth in the Fiesta Bowl, though, the Broncos delivered as usual with an eye-opening, 38-30 upset over the Pac-12 South champ, Arizona, sealing a nine-game winning streak to close the season and evoking inevitable comparisons to the Boise teams that had clinched perfect seasons in the Fiesta in 2006 and 2009. At 12-2, the 2014 edition wasn’t perfect, but it was close enough to suggest that the 2015 team could be: Although it will be saddled with a new quarterback and will undoubtedly miss last year’s workhorse, All-MWC tailback Jay Ajayi, the offense returns the MVP of the bowl game, wide receiver Thomas Sperbeck, as well as consistently productive slot receiver Shane Williams-Rhodes, promising tight end Jake Roh, and all five starting linemen, a long-in-the-tooth group that has logged a combined 90 career starts.

On defense, 10 of the 11 base positions3 will be manned by upperclassmen with significant starting experience, including four players (DE Kamalei Correa, LB Tanner Vallejo, CB Donte Deayon, and FS Darian Thompson) who were voted first- or second-team All-Mountain West in 2014; the only newcomer to the lineup is sophomore safety Dylan Sumner-Gardner, a legitimately blue-chip recruit who garnered offers from the likes of Clemson, LSU, Oklahoma, Notre Dame, Texas, and Texas A&M, and played in all but one game as a true freshman. Depending on how quickly redshirt sophomore Ryan Finley takes to the QB1 role, there’s little question on paper that the Broncos have the pieces in place to go the distance against their schedule. No other FBS team, save maybe Ohio State, looks like it will be favored by as much in as many games.4 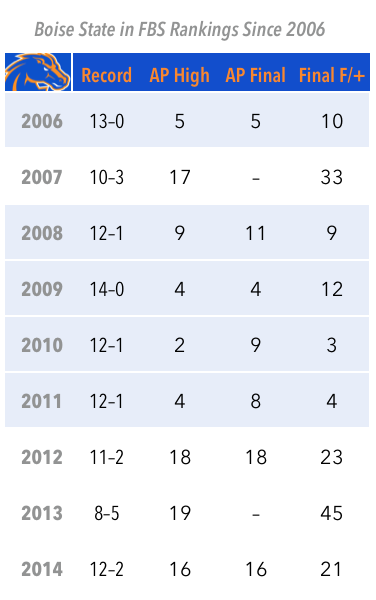 Of course, if the Broncos do go undefeated, there’s little question that the schedule itself will serve as Exhibit A of Boise’s second-class status: Unlike the dominant Kellen Moore–led teams from 2008 to 2011, which consistently measured up against top-shelf competition,5 the 2015 team won’t face a single opponent ranked in the preseason AP poll, and only one (BYU) that even earned votes. If the Broncos are 2-0 after tonight’s date with Washington and next weekend’s trip to Provo, they’ll be substantial favorites to win out, at which point the arguments will begin over how high they can conceivably rise. In contrast to Marshall in 2014, which never had the faintest prayer of cracking the playoff discussion, Boise State has a steady track record of success over the past decade and a brand that voters (and selection committee members) recognize and generally respect; it can also point to last year’s Fiesta Bowl win as evidence that the current lineup is more than capable of holding its own in a prestige setting. If the Broncos win by large enough margins on a weekly basis, they’ll be increasingly difficult to ignore as power-conference contenders start to fall by the wayside.

First, though, there’s the unfinished business with Washington, arguably the tallest hurdle the Broncos will face, in a setting that promises to be awkward and emotional as Petersen mans the opposite sideline. The 2014 Huskies were a disappointment, turning in an 8-6 finish without managing a single win over an opponent with a winning record, and the outlook for 2015 doesn’t lend itself to much optimism: Aside from the expected attrition — four first- and second-round draft picks on defense, four longtime starters on the offensive line — Washington has also lost last year’s starting quarterback, Cyler Miles, to a career-ending hip injury; its most experienced O-lineman, Dexter Charles, to a career-ending knee injury; and its most versatile player, wide receiver/cornerback/kick returner John Ross III, to a torn meniscus. The identity of the starting quarterback for tonight’s game remains a secret. That Washington underachieved in Petersen’s first year with a much more promising depth chart is bad enough; that his second team might serve as a springboard for his old charges to return to their former heights can only add insult to injury.