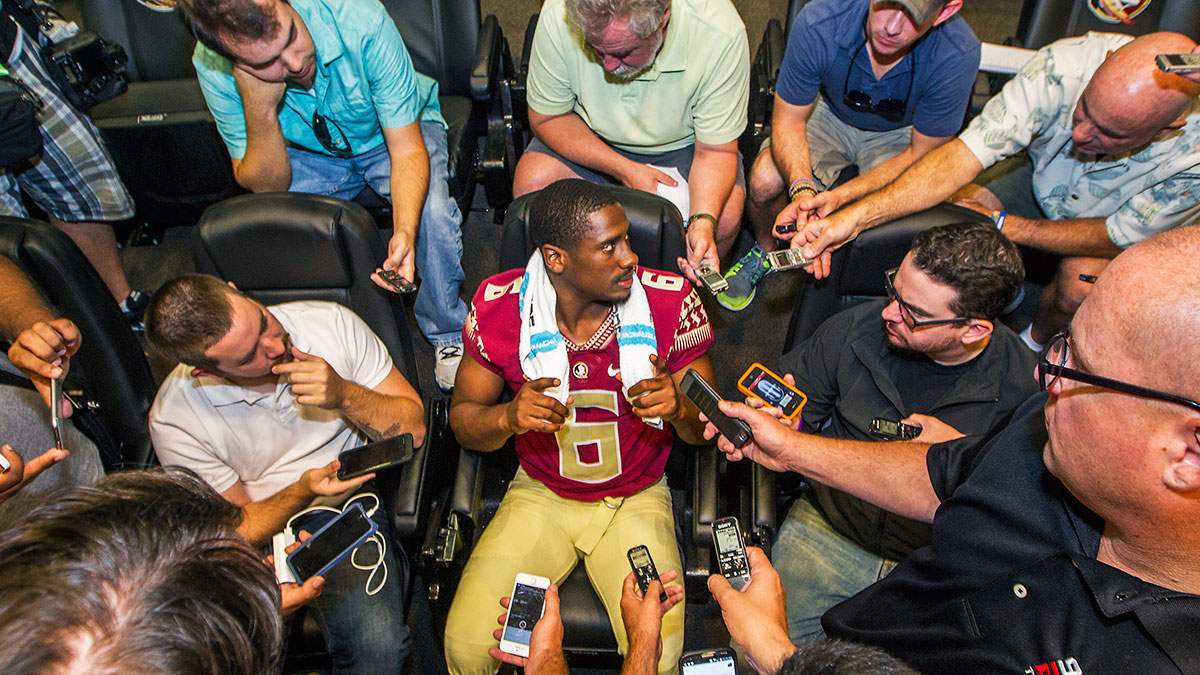 College football’s transfer market is booming, and unless you want to embarrassingly misidentify Malik Zaire as Everett Golson in front of your judgmental friends, you need to familiarize yourself with the old names who find themselves in new places in 2015. To aid you on your quest, I’ve kindly written about eight of the FBS’s most notable transfers for this season. You’re on your own with everyone else, though. OK? OK.

Here is a statement of fact: Texas Tech’s defense was atrocious last year. The 2014 Red Raiders surrendered a staggering 513 yards per game, fourth most in the FBS, and were one of only four units to give up more than 40 points per game. They suffered massively embarrassing losses both on the field and off. All of which makes Mitchell an absolute godsend in Lubbock.

The former five-star recruit and ballyhooed athletic specimen originally attended Ohio State, where he redshirted as a true freshman in 2013 following an injury in fall camp, but the Plano, Texas, native elected to leave the Buckeyes in early 2014 so that he could be closer to his ailing father, former NFL linebacker Ken Mitchell. The younger Mitchell settled on Texas Tech because of the opportunity to make an immediate impact, though the NCAA ultimately refused to grant him a waiver to play in 2014.

Consequently, Mitchell is extraordinarily well-rested heading into this season, having not played a down of football since high school. His presence alone should drastically improve the Red Raiders’ defense, which has nowhere to go but up. (Mitchell’s brother Mickey is an incoming freshman on Ohio State’s basketball team, and was apparently unfazed by Mike’s Rothian departure from Columbus.)

Jim Harbaugh’s first major defeat at Michigan came back in May, when All–Big Ten honorable mention Countess announced that he was transferring to Auburn. The graduate transfer will be immediately eligible to play and should fill a significant need for the Tigers, who struggled mightily in pass coverage last season. Remember when Amari Cooper single-handedly got DC Ellis Johnson fired? Good times.

True to its reputation as a heavy player in the transfer market, Auburn also landed the services of former Georgia safety Tray Matthews, who sat out 2014 after disciplinary issues led to his Bulldogs dismissal. Between Countess, Matthews, and freshman phenom Byron Cowart, new Tigers defensive coordinator Will Muschamp has probably been salivating all summer. Who could blame him?

Based on my completely unscientific analysis, I can confidently say that roughly 90 percent of transfers result from disciplinary issues, coaching changes, depth chart hurdles, or homesickness. Decidedly not on that list: the shuttering of one’s program, which is precisely what led Howard from UAB to Indiana.

While it would be unfair and unrealistic to expect anyone to replace Tevin Coleman’s superstar production, Howard is a worthy successor to the Doak Walker Award finalist. The 6-foot-1, 228-pound junior rushed for 132.3 yards per game in 2014, good for seventh in the FBS, and capped off his season with an outstanding 262-yard performance against Southern Miss.

UAB football, which has subsequently rebooted, ceased to exist less than a week later. On New Year’s Day, Howard announced that he was transferring to Indiana, becoming the first highly sought-after football player to willingly don a Hoosiers uniform. (I kid, I kid — well, not really.) Expect him to pick up more or less where Coleman left off.

While the graduate transfer has been pegged as Marcus Mariota’s replacement since last winter, he won’t officially become a Duck until later this month, so long as he passes his summer math course at EWU. The struggle, as they say, is real — even for one of the most decorated players in FCS history.

As you may have heard, Oregon isn’t the only school trying to replace a Heisman-winning quarterback. With Jameis Winston migrating south to the Tampa Bay Bucs, FSU is conducting a preseason competition between redshirt junior Sean Maguire and graduate transfer Golson, and the early returns seem to indicate that the race is neck and neck. (Insert obligatory “If you have two quarterbacks, you actually have NONE” aphorism here, which legitimately seems to apply in this case.)

You’ll surely remember Maguire as the former Grantland That Guy who started against Clemson last season when Winston got suspended for publicly bellowing a certain inappropriate phrase that shall not be named. (Google it if you must.) Golson, of course, guided Notre Dame to an undefeated regular season in 2012, proceeded to miss all of 2013 after committing an academic violation, and then became a turnover machine upon returning to the Irish’s starting lineup in 2014, causing Brian Kelly’s head to emit lava on multiple occasions. Jimbo Fisher isn’t exactly picking between Heisman hopefuls here, but Golson’s comparatively strong pedigree should give him the edge.

After hiring a suitable player development coordinator, one of Bobby Petrino’s first orders of business upon taking over as Louisville’s head coach was to convince this duo of former Georgia Bulldogs to help bolster the Cardinals’ secondary. Both played under current Louisville defensive coordinator Todd Grantham at Georgia in 2013 and are projected to start for the Cardinals this season.

If you follow recruiting, you surely remember Harvey-Clemons, a former five-star prospect who famously experienced some pesky paperwork troubles on signing day. Meanwhile, if stalking high school football players isn’t your thing, you probably remember Harvey-Clemons as the guy whose ill-advised deflection led to the Prayer at Jordan-Hare, and the guy who then got booted from the Bulldogs due to a violation of team rules.

Coincidentally, Louisville opens the 2015 season against Auburn. It seems safe to assume that Harvey-Clemons will be searching for some redemption.

For his part, Wiggins attributed his transfer to Louisville’s willingness to embrace his personality and proceeded to describe himself as “jovial, carefree, and a bit of a jokester” in a written statement to 247Sports. Let me be the first to say that I am shocked — SHOCKED — that a player with a sense of humor proved incompatible with Mark Richt. Considering that Wiggins was thrown out of a Louisville practice this spring, however, it remains to be seen if Petrino has embraced Wiggins’s personality any more than Wiggins’s former coach did. Remind me why there isn’t a Hard Knocks–style reality show following Louisville around this fall?

The 30: Experience Doesn’t Matter When You Hit Like Kyle Schwarber