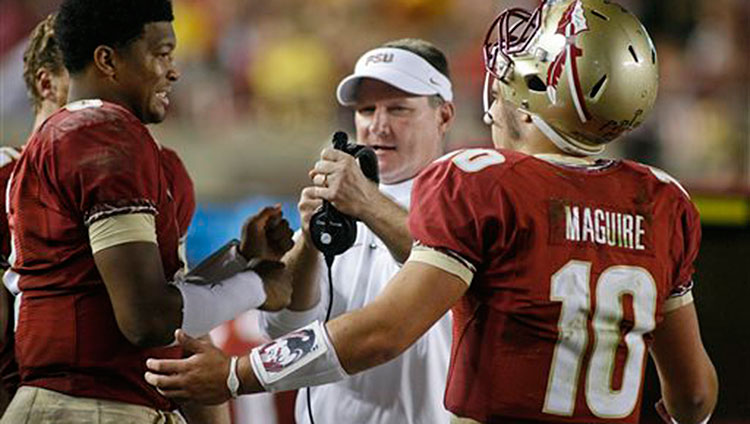 Who is he? Florida State starting quarterback Sean Maguire!

Wait, what about Jameis Winston? You didn’t hear?

BREAKING: Jameis Winston suspended for first half of Saturday's game vs. Clemson. pic.twitter.com/eCXsQ7qVaq

Oh, did he get caught with more crustaceanic contraband? Not quite. This time, Winston hopped on a table in Florida State’s student union and bellowed … something really bad, to no one in particular, per a number of eyewitness accounts. While he was merely quoting the year’s most played-out meme, it wasn’t a good look for the BMOC, especially given the ongoing investigation into 2012’s rape accusations.

Let me get this straight: Winston won’t be playing in the first half on Saturday because he referenced a viral video? That’s correct. Say what you will about Winston, but you can’t question his commitment to getting suspended for the most ridiculous reasons. This ain’t your daddy’s FSU.

OK, so: Sean Maguire! What’s his origin story? Like Winston, Maguire was part of Jimbo Fisher’s ballyhooed 2012 recruiting class and redshirted his first season. Unlike Winston, Maguire was a measly three-star prospect whose only other offer came from Buffalo, the least-prestigious program in the FBS. The New Jersey native remained an afterthought heading into 2013. But Clint Trickett’s transfer to West Virginia and Jacob Coker’s knee injury combined to elevate him to second-string by November. Maguire ended up seeing some garbage-time action in blowout wins over Wake Forest, Syracuse, and Idaho, going 13-of-21 for 116 yards, two touchdowns, and two interceptions.

When Coker transferred to Alabama in January, Maguire became FSU’s full-time backup. However, with Winston off playing baseball, Maguire handled the majority of first-team reps during spring practice, which should come in handy tomorrow night.

Hold up one second — who are the Noles even playing? They’re hosting no. 22 Clemson.

How are oddsmakers reacting to this news? Florida State, which opened as a 20.5-point favorite, is now favored by 16.5-17.5 points.

That seems pretty reasonable. Does Maguire have an immaculately edited high school highlight reel I can use for scouting purposes? Of course he does.

Between the frequent use of slo-mo and emotionally gripping soundtrack, this seriously almost moved me to tears. If this whole football thing doesn’t work out, Maguire could definitely compose scores for Steven Spielberg.

Can I get my 12 dollars back from seeing neighbors?

You are? Splendid. He’ll be an asset to your timeline.

But is he a good sibling? The jury’s still out on that one. Consider this: His sister refused to text him on National Sibling Day. Yes, you heard me correctly.

Book it: NFL scouts will have a FIELD DAY with this tweet. No text from your sister on National Sibling Day = obvious character flaw.

Is there any chance he encouraged Winston to holler the obscene phrase, knowing random students would tweet about it and get Winston in trouble? We can’t discount this possibility. I mean, if you were a backup quarterback, wouldn’t you use whatever means at your disposal to move atop the depth chart? This is why Kirk Cousins constantly sends RG3 texts that read “SLIDING IS A SIGN OF WEAKNESS.”

Is there any chance Maguire performs well enough in the first half to permanently unseat Winston? Um, no. Vic Beasley won’t allow it.

Will he significantly alter the game’s result? Almost definitely not, considering the Noles’ stable of dependable rushers. Maguire’s role will mainly consist of handing off to “William” Karlos Williams, Dalvin Cook, and Mario Pender, all of whom are averaging 4-plus yards per carry. Don’t worry, Maguire played in a wing-T offense in high school, so he’s used to ceding the spotlight to running backs.

You Shall Not ... Run? The Brick-Wall Rush Defenses of the Jets, Lions, and Cardinals