You Shall Not … Run? The Brick-Wall Rush Defenses of the Jets, Lions, and Cardinals 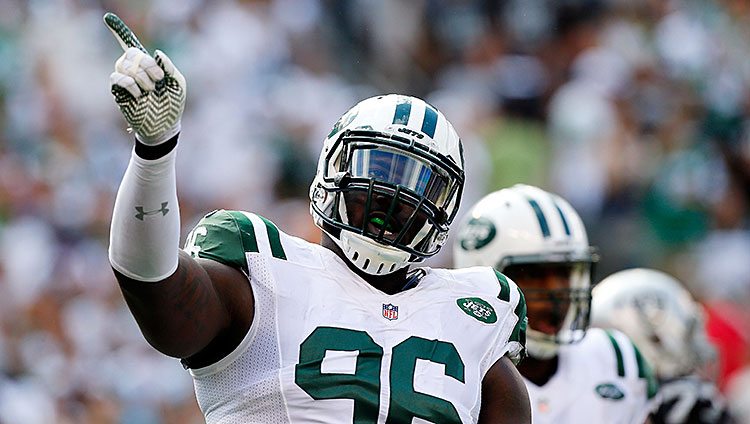 It’s hard to be a consistently good run defense in the NFL. Take … wait for it … the Bears, last season. In 2012, Chicago finished first in run-defense DVOA. Last season, it dropped to 32nd — from best to worst in a single season. There are explanations for that — injuries, scheme change, player turnover — but the Bears aren’t an isolated case. New England went from sixth to 27th, Green Bay from 14th to 30th.

For most teams, run defense is the most volatile element of the game. And that’s part of what has made the Jets, Lions, and Cardinals so impressive over the first two weeks.

Last year, Arizona, New York, and Detroit finished first, second, and fifth, respectively, in run-defense DVOA. Running against these teams was a miserable chore. After two games this season, it looks like it might be again.

It’s a very, very small sample, but Arizona has the best run defense in the league, with Detroit sitting in third, and the Jets at fifth.1 All three are tied atop the league after giving up 2.0 yards per carry. The cool thing with these three defenses is that they each stop the run in different ways.

The Lions are the exception in this trio for running a 4-3 as their base defense. The Jets and Cardinals use alignment and confusion to their advantage. Detroit has a bunch of guys who are just a pain in the ass to block. In Week 1, the Lions gave up just 2.9 yards per carry to Rashad Jennings, who really drew the short straw in having to play Detroit and Arizona in his first two games as a Giant.

What makes Ndamukong Suh one of the best defensive tackles in football (if not the best) is that he combines terrorizing quarterbacks with being a monster in the run game. Here he’s playing the nose on second-and-long and just deposits the center three yards deep in the backfield.

Early penetration shuts down a lot of running plays, but the Lions’ success isn’t just a product of having Suh and Nick Fairley up front. Stephen Tulloch and DeAndre Levy remain drastically underrated players, and Tulloch is a handful against the run. He does everything right in the play above — taking on the guard with his outside shoulder, shedding him, and squaring up to make the tackle in traffic. It isn’t complex; it’s just two of the better players in the league showing why people call them that.

New York’s strength is obviously along its defensive line, but its success is about more than having an edge at each individual spot. The Jets thrive on throwing an incredible amount of looks at opposing offenses, most of which only accentuate just how good that front line really is.

He may not be the best pure run-stopper on the Jets, but Muhammad Wilkerson is a perfect fit when it comes to the flexibility Rex Ryan is looking for in defensive linemen. Wilkerson is technically a defensive end, I guess, but he’ll line up anywhere from the outside shoulder of a tackle to head-up on the center, which he’s doing in this play from the Jets’ win against New England last year.

Right now, there are probably four players in football asked to do this many jobs along a defensive line: Wilkerson, Jurrell Casey, J.J. Watt, and Calais Campbell (who’ll we get to in a bit).

The Jets don’t ask Wilkerson to play too much nose tackle, though. They don’t need to. They have Damon Harrison, the forgotten man among the Jets’ front line. Wilkerson and Sheldon Richardson have the pedigree, but Harrison, an undrafted free agent, contributed as much as anyone to the Jets’ stoutness against the run last year. That hasn’t changed through the first two games.

Harrison is just a lot of human to deal with. “Snacks” is listed at 350 pounds. He’s much more than a space- and double-team-eater, though. For a guy that big, Harrison has amazingly quick feet, and on top of how well he moves, he’s also got an impressive feel for how and where people want to block him.

The Packers didn’t run much Sunday. That might’ve been because they were down 14-0, or because they knew there wasn’t much point. On Eddie Lacy’s first carry, Green Bay rookie center Corey Linsley was tasked with reaching Harrison to the play side on his own. It did not go well.

Harrison and Wilkerson do most of their work absorbing and discarding blocks, while Richardson’s move is just trying to avoid them. His value comes as a playmaking penetrator, something he showed off a lot last year.

As good as the Jets’ run defense was a year ago, it still wasn’t enough to claim the top spot in the league. That belonged to the Cardinals, who have somehow carried it over to this season. Arizona is without three of the best four players from its 2013 front seven, and it’s still playing the run better than anyone else in football.

Just like the Lions and Jets, the Cardinals have one of the top defensive players in football on its line. At 6-foot-8 and 300 pounds, Calais Campbell does everything, and he does it from just about everywhere.

For as good as Campbell is, he still isn’t enough to explain how Arizona has been able to replace Karlos Dansby with Larry Foote and Darnell Dockett with Tommy Kelly while not skipping a beat against the run.

On this 4-yard loss from the first quarter against San Diego, it’s clear why Arizona is hard to block. Take a look at the left side of the Cardinals’ front. With Kelly lined up as a 3-technique,2 everyone on that side has a one-on-one matchup with the offense. There are no opportunities to double-team anyone, which likely means there’s going to be little to no push by the offensive line. The Cardinals are pretty much ensuring they’re going to be playing at the line of scrimmage or behind it.

Plenty of teams run a 3-4 that essentially turns into a five-man front on run downs. That doesn’t mean Foote should be playing like Patrick Willis.

Foote drops Ryan Mathews four yards into the backfield here — and a couple more times before the game was over — in part because Arizona’s schematic advantage has simplified his job. The Cardinals clearly encourage and teach their linebackers to be attacking, physical, downhill players, and they aid that by creating easy-to-diagnose lanes to fill in the run game.

At a certain point, that mind-set and willingness to play the run is still going to be necessary. The Cardinals and Jets are helped by a lot of man coverage, varying fronts, and superior talent, but it’s obvious that stopping the run is also a stated priority. That may sound simple, but in the end, it still matters.