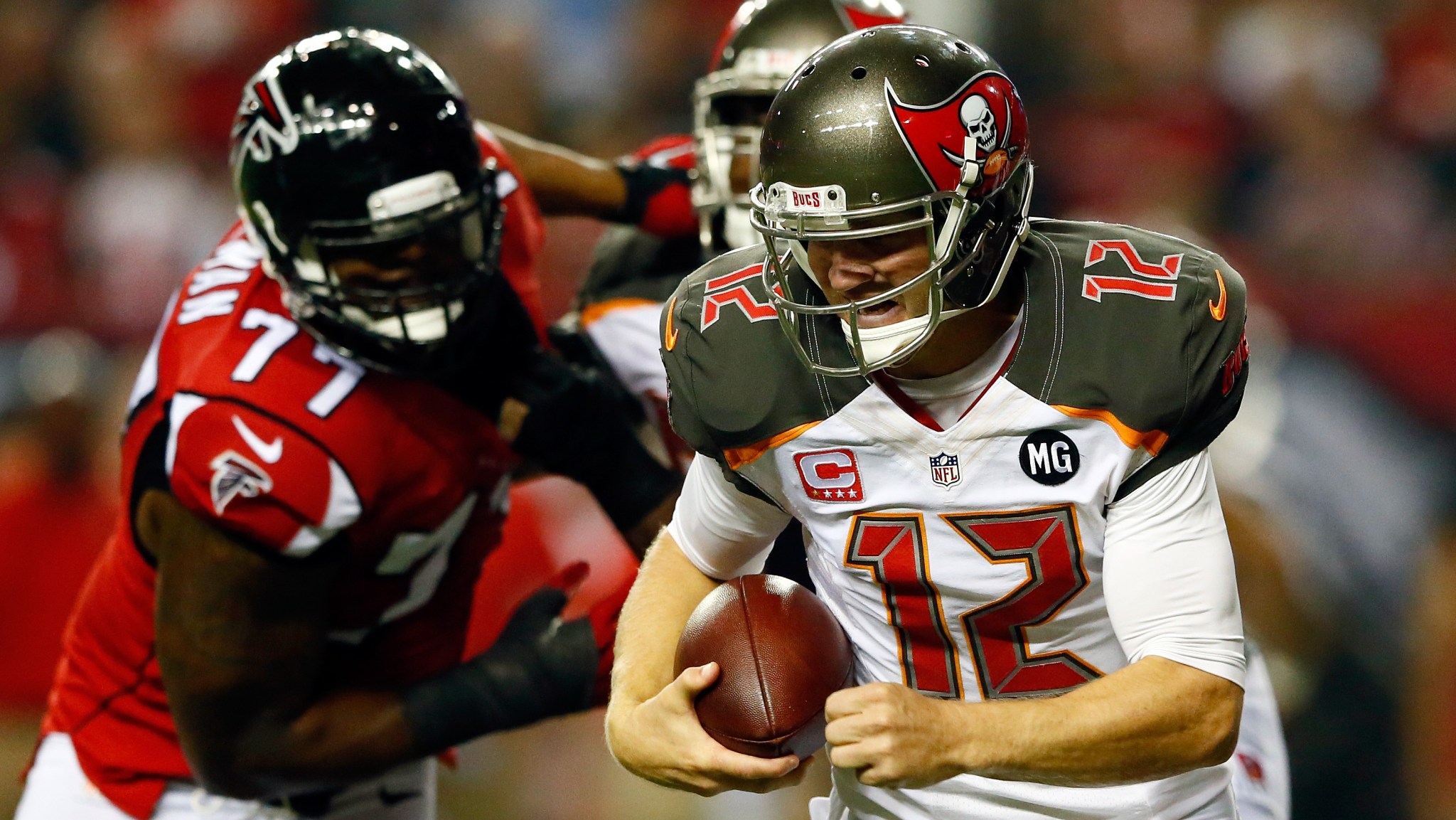 If you’re reading this, odds are you had a better night than the Tampa Bay Buccaneers. Lovie Smith’s team went down 56-14 in Atlanta on Thursday, with two meaningless late touchdowns (including a pick-six of Atlanta backup T.J. Yates) putting a fresh coat of paint on a disastrous scoreline. Playing without star defensive tackle Gerald McCoy or running back Doug Martin, the Buccaneers looked sloppy and uninterested. It’s one thing to turn the ball over a bunch and have Devin Hester run through your team. It’s another when Dashon Goldson — a $42 million free-agent signing last offseason — is taking routes a high-school safety would laugh at en route to getting burned by Antone Smith on a touchdown run.

The Bucs were incomprehensibly bad, the sort of bad you would use as proof that a team was finally quitting on a coach, if it weren’t for the fact that Smith has only coached this team for three games. They never looked this bad with Greg Schiano! It was the sort of bad that makes you evaluate yourself. Am I too much like the Bucs? Should I stop wearing white and blood orange and using a pirate font?

Extremes are always fun, so the loss naturally got me thinking about putting the Buccaneers and their loss into perspective. I had a few questions, and I went back into the history books to answer them.

Was that the worst loss ever in prime time? 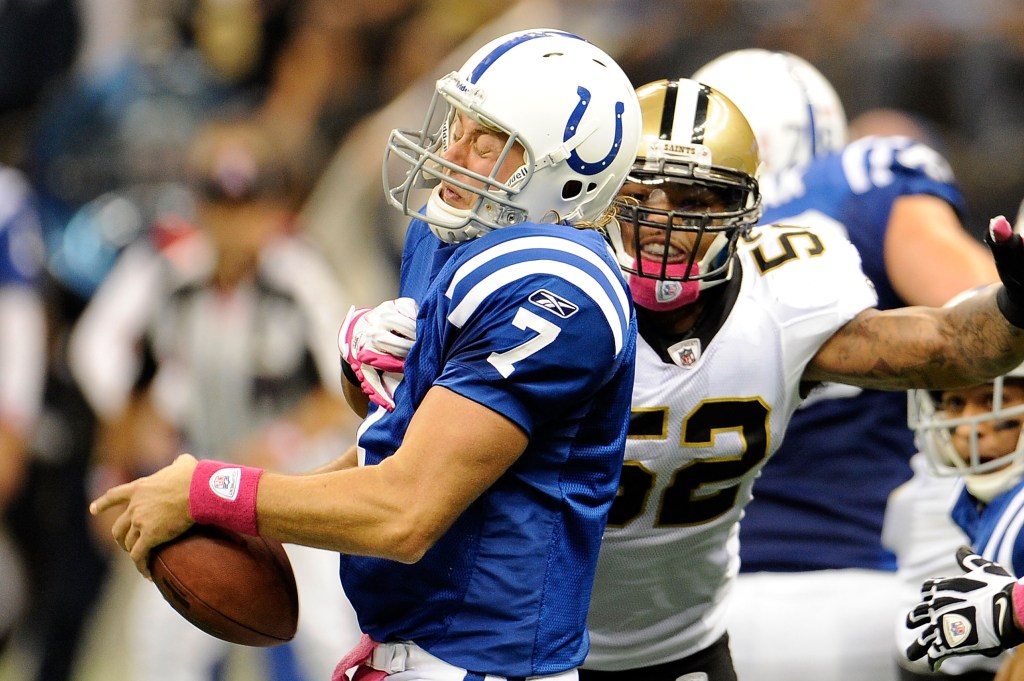 Losing by 42 points is pretty bad, but it’s not the biggest loss in a nationally televised regular-season game, or even close to it. In fact, you have to go back no further than 2011 to find a prime-time game with a larger margin of victory. In Week 7, Indianapolis traveled to New Orleans for a Sunday Night Football matchup that looked far more exciting on paper to NBC executives before the season than it did when the Colts actually arrived into town at 0-6 and with Curtis Painter at the helm. The Saints scored on each of their first nine possessions, punting only on their 10th and final drive of the night. New Orleans came into the game as 14-point favorites, but went home with a 62-7 win, a 55-point margin that stands as the largest regular-season victory in prime time.

Is a loss this big the mark of a hopeless team? 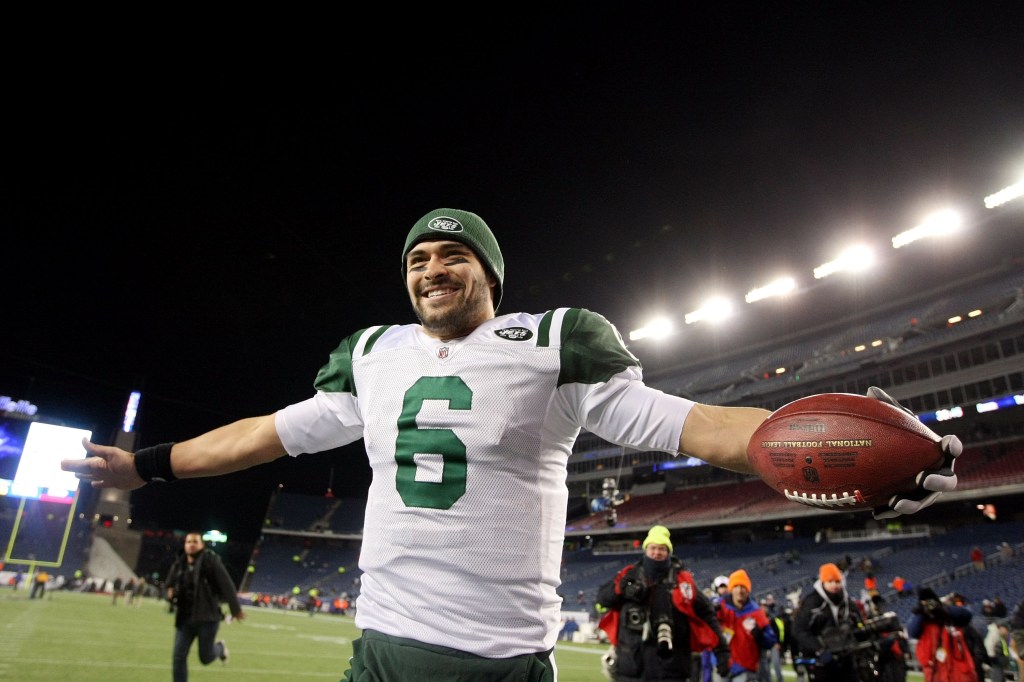 Not necessarily. I never thought the Buccaneers were going to make the playoffs this year (and obviously still don’t, after last night), but teams have suffered worse defeats than this and still managed to make the playoffs. Not many, but a few. The 1989 Oilers lost 61-7 in Week 15 to the Bengals, just two weeks before the playoffs began, where they lost 26-23 to the Steelers. A memorable recent example comes from 2010, when the Jets traveled to Foxborough in early December and lost 45-3 to the Patriots. A little more than one month later, New York traveled to New England again for a divisional-round matchup and came away with a 28-21 victory. Ah, variance.

Are the Buccaneers off to the worst three-game start in league history? 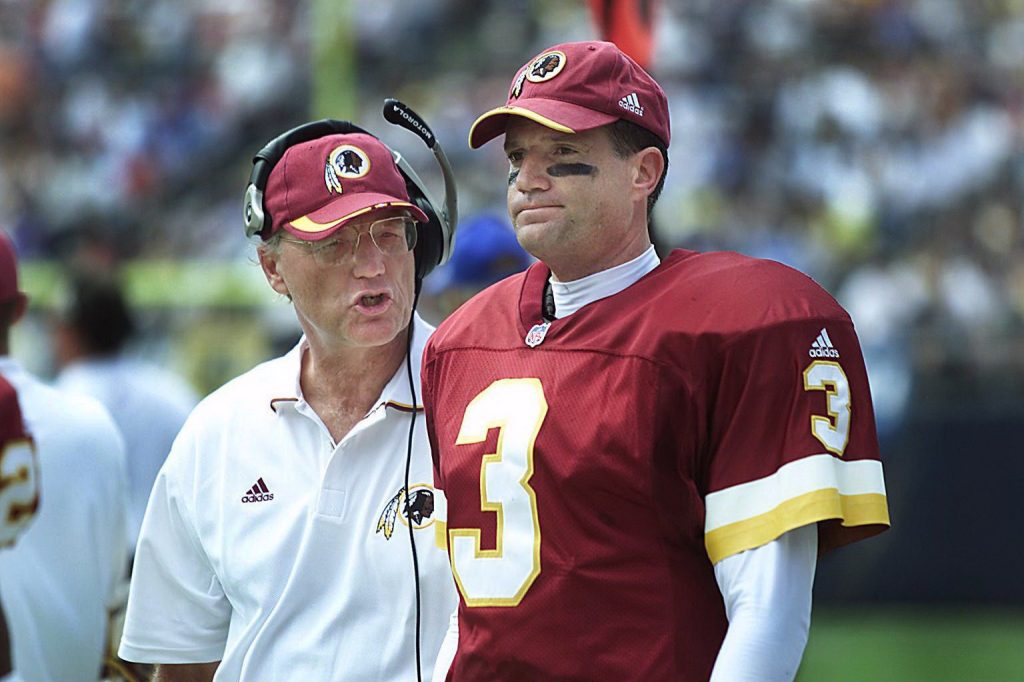 Well, you could technically claim they’re tied with hundreds of teams for the worst start in league history at 0-3, but we can probably employ better measures of analysis. One obvious example is point differential, which doesn’t particularly favor the Buccaneers after last night. After three losses, Tampa Bay’s point differential is a dismal minus-50, most of which comes from Thursday’s fiasco. That’s an average loss of nearly 17 points per game, which is pretty tough to do over a three-week stretch.

Is it the worst start ever? Not even close. The 1950 Baltimore Colts1 lost 38-14, 31-0, and 55-13 in their first three games for a point differential of minus-97, nearly twice as bad as Tampa Bay’s total. More recently, Washington’s 2001 team started 0-3 with losses of 30-3, 37-0, and 45-13, combining to form a point differential of minus-96. Even more impressive, Washington turned things around and finished the year 8-8! For his work in turning things around, Marty Schottenheimer was fired after just one year at the helm and replaced by Steve Spurrier.

Of course, there’s probably more to the issue than point differential alone. Tampa Bay’s first two games were close, but the Buccaneers lost those games to a second-string quarterback (Derek Anderson) and a third-string quarterback (Austin Davis). The Buccaneers were a dropped pick-six away from taking the lead on Anderson in the fourth quarter in Week 1, but they also offered little in the way of resistance until that fourth quarter began. Since the merger, only six teams have been outscored by more points in their first three games when not including fourth quarters.

Is there a hangover after losing in such ignominious fashion? 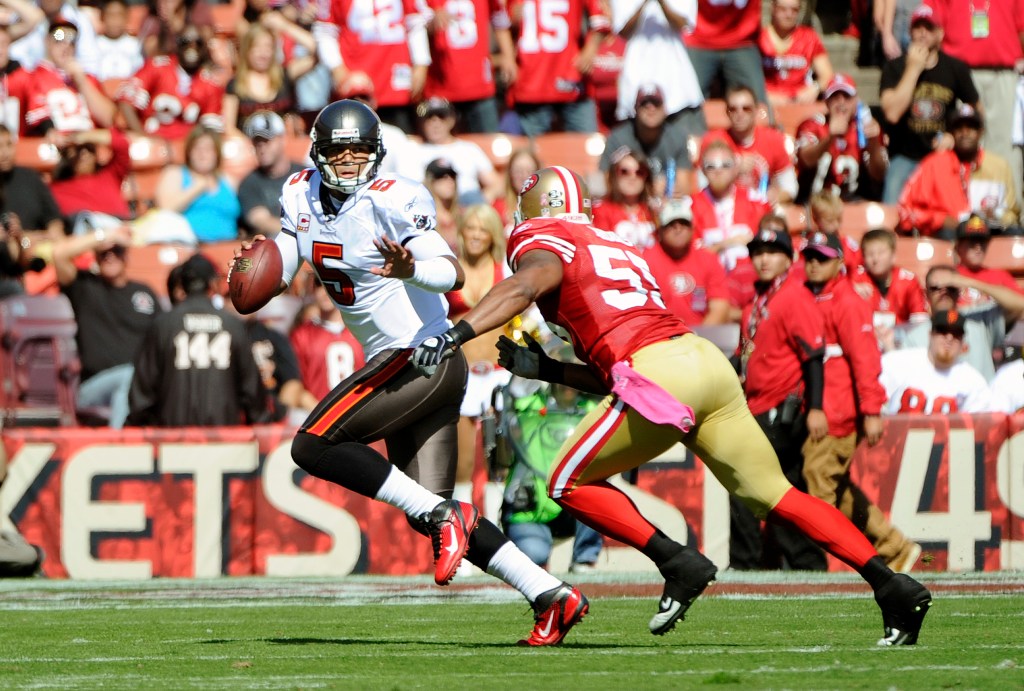 The announcers speculated during last night’s game that the Buccaneers wouldn’t be able to simply shrug off their astounding loss, and that there would be a long-term impact in terms of it eroding their confidence going forward. While I’m sure losing by 42 can’t do much for your confidence, it’s a testable idea.

Of course, Buccaneers fans are very familiar with a big loss having an impact on a team. The 2010 Buccaneers rode a soft schedule and a fluky low turnover rate to an unexpected 10-6 campaign, and they started the 2011 season 3-1 after four games decided by one touchdown or less. In Week 5, they traveled to San Francisco and got blown out, 48-3. They proceeded to lose 10 of their 11 remaining games, quitting on coach Raheem Morris in the process. That one win, though? It came the week after the blowout, with Morris’s charges pulling out a 26-20 victory over a Saints team that would finish 13-3. That team didn’t have a blowout hangover; the same announcers would probably have noted that they were embarrassed by the loss and motivated to play better the following week.

Creating an empirical case that teams that get blown out struggle in the weeks to come is difficult because there’s a selection bias at play; teams that get blown out in a given week are more likely to be bad on a week-to-week basis than teams that don’t get blown out, so merely looking at how these teams played the following week isn’t good enough. Instead, it has to be a question of degree. Does a team that loses by four touchdowns perform better the following week than one that loses by three touchdowns? By two touchdowns? That mitigates some (if not all) of the selection bias, since we’ll be comparing bad teams to mostly other bad teams.

I went back and charted every regular-season loss through the first 15 games of the regular season from 1990 to 2013,2 split them into groups by touchdown-deficit lines, and then looked at what each of those groups did the week after their loss. Because there weren’t many massive blowouts, I lumped all the games where a team lost by more than five touchdowns (losses of 36 points or more) into one group. What does history tell us about the hangover effect?

There is no hangover effect. It makes sense, since teams drink plenty of Gatorade. Although there’s still a relatively small 97-game sample for teams that suffered truly significant blowouts, they’ve basically played about the same the following game as teams that lost by two scores.

The Buccaneers, in the middle of a three-game road trip, travel to Pittsburgh next week. The Steelers are off to a shaky start through two games, having blown a 24-point halftime lead to the Browns before squeaking by with a last-second field goal in Week 1, then getting blown out by the Ravens, 26-6, in Week 2. Would it really be impossible for an embarrassed Buccaneers team with 10 days of rest and McCoy back in the lineup to give the Steelers a run for their money? It’s not difficult to imagine.

Have the Buccaneers had the worst set of quarterbacks in football? 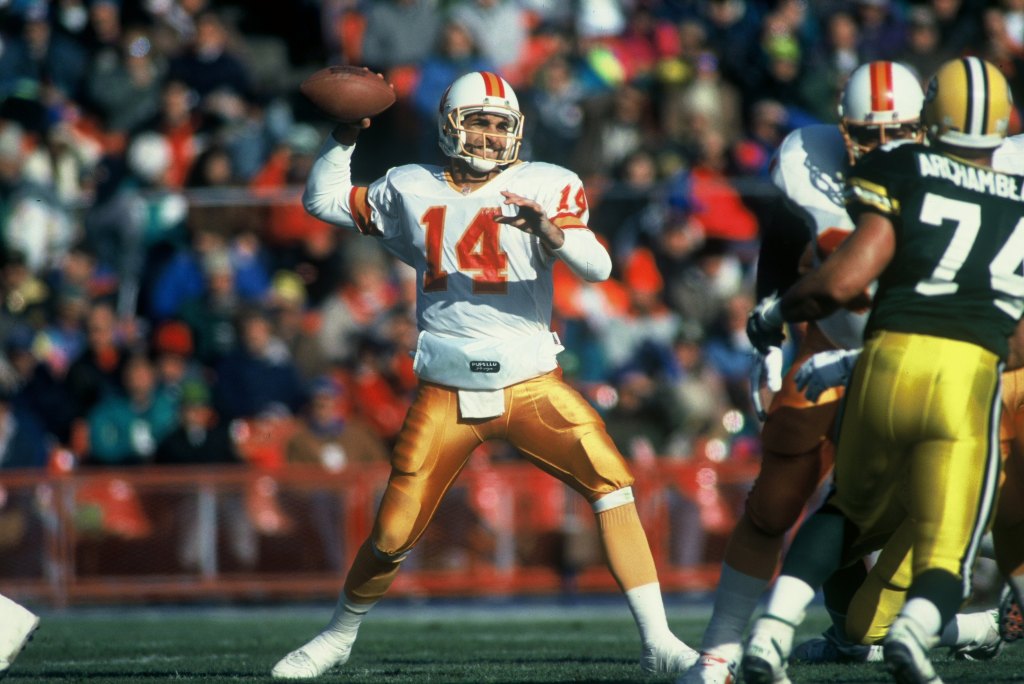 Week 3 was probably the moment the camera zoomed back and revealed that Josh McCown was surrounded by pumpkins. After a disastrous Week 1 gave way to a middling Week 2, McCown was a mess Thursday against an Atlanta defense that had been 30th in pass defense DVOA through two weeks. The journeyman backup went 5-of-12 for 58 yards with an interception before injuring his hand and leaving the game. He has now thrown four picks in his first 68 passes with the Buccaneers, after throwing just one in 224 attempts during his breakout 2013 campaign with the Bears. Marc Trestman, sadly, is not walking through that door. Or onto that pirate ship. The Bucs signed a replacement-level backup to a two-year, $10 million deal3 after the hottest stretch of his life and got a … replacement-level backup.

Barring some stunning run of competence from second-year signal-caller Mike Glennon (who replaced the injured McCown), Tampa Bay will head into the market yet again for a franchise quarterback. I started thinking about how futile that process has been for the Buccaneers over the past few years, and it actually put a lot of their organizational issues into context. Before McCown, there was Josh Freeman, who had one great season (2010) and one up-and-down season (2012), split by a disastrous 2011 and ugly cups of coffee on the way in (2009) and out (2013). Freeman followed Jeff Garcia, who arrived in 2007 and played well enough to make the Pro Bowl before being benched for Brian Griese during the 2008 season (regaining his job after Griese was injured). Garcia was the last of the many quarterbacks from the Jon Gruden era, a group that included Griese (four years before his second run as the starter), Bruce Gradkowski, Chris Simms, and Brad Johnson, who won the team’s lone Super Bowl as a game manager in 2002.

Johnson might be the most successful quarterback in team history; his competition is Vinny Testaverde, who was awful in Tampa Bay before immediately playing better upon leaving, and Doug Williams, who made the playoffs three times as the starting quarterback in Tampa Bay. This is the same franchise that cast off Steve Young to the 49ers after one bad season as the team’s starter after leaving the USFL, and the one that stuck with Trent Dilfer through the three-year stretch at the beginning of his career in which he threw 17 touchdowns against 43 interceptions. Williams, Dilfer, and Young all won the Super Bowl as the starting quarterback for another team. The Bucs have failed at drafting and developing quarterbacks. They’ve failed at signing other team’s starters in free agency. Whatever it is where you end up with Erickson starting at quarterback for two years? That’s happened, too.

I went back and calculated the franchise passing numbers for every team that was in the league when Tampa Bay joined in 1976.4 As it turns out, Tampa Bay has the worst batch of quarterbacks in the NFL since arriving in town, and it’s not especially close. Tampa Bay is last over that time frame in completion percentage (55.4 percent), yards per attempt (6.0), interception rate (3.9 percent), and passer rating (68.9). And those numbers don’t include last night, which isn’t exactly going to improve things.

It is probably no surprise Tampa Bay has also won a lower percentage of its games (39 percent) than anyone else in football over that time frame besides Detroit. When the Buccaneers find a quarterback, they’ll find consistent success. After nearly 40 years of looking under rocks and in the bargain bin, the Bucs have become frequent shoppers, but definitely not expert ones.