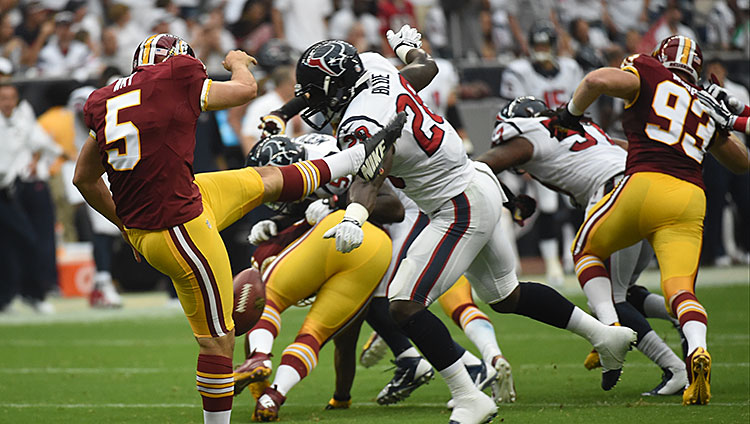 While the NFL’s major on-field talking points have been Robert Griffin’s ugly injury, the resurgent Buffalo Bills, and the installation of Darren Sproles 3.0, it’s also worth paying attention to one frivolous quirk that has AND THE PUNT IS BLOCKED!!

It’s not unreasonable for announcers using the brief time while the punter awaits a snap to discuss literally anything else. Nothing of import usually happens until the moment the punt returner catches the ball, when that building wave of anticipation either washes out or continues to swell with every yard that is erased. Nothing usually happens, mind you.

There are those rare occasions when a blocked punt1 turns the tide.

Don’t worry, there aren’t videos of famous blocked punts saved on my phone. It’s simply that the six blocked punts through two weeks stand out, considering that the last decade has produced an average of fewer than 13 blocked punts per season. There were only six blocked punts in all of 2009. This is unlikely part of anything larger2 and it offers little insight into football strategy, but it does remind us of roles too often forgotten.

Dedicated fans who watch punt returns instead of flipping the channel typically are tantalized by the shifty players waiting to entertain with a Family Circus act: These are the Dante Halls and Devin Hesters and Ted Ginns of the football universe.

The (potential) punt blockers don’t have that luxury of time and space, however, and are forced to regularly attempt something that seems doomed to fail.

Coaches populate special teams units with anonymous young players who are eager for any chance to contribute. But game-changing plays happen with the quarterback off the field more often than you would think. One of this season’s six blocked punts directly resulted in a touchdown, and the others flipped field position before resulting in a score. They also provided brief snapshots into the thousands of individual battles that go largely unseen each week.

(There have been five blocked field goals this season, but being part of the kicking phylum doesn’t mean they are the same species. Field goal attempts are inherently positive plays, likely to result directly in points, even when they feel like a letdown after falling short of a touchdown. Punts are always a sign of surrender, meaning blocked punts are a failure to fail honorably.)

Marvel at Texans rookie running back Alfred Blue, who casually took the ball off the punter’s foot as if he were reaching for another hors d’oeuvre. Hmm, maybe I’ll try the salmon tartare.

It’s tempting to say the other punt blockers exerted more energy, but with so little time to operate, their successful maneuvers have been ballet in cleats.

• Rookie Dolphins linebacker Chris McCain, the only player to breach the middle of the scrum, used a split-second head start to knife between the center and right guard before engulfing the ball. The rest of the infiltrators lined up on the far right side of the offensive line, where it took one quick Eurostep for second-year Rams safety T.J. McDonald to escape before leaping into the ball’s path.

• Bills running back Anthony Dixon, in his fifth season, was so unimpeded that the punt hit him squarely in the chest, the thud-thuds close enough together to merge into one sound that was quickly dwarfed by the roar of the crowd.

Many of these under-the-radar players have the potential to contribute in bigger ways in the future, but I’m happy to appreciate what they’re offering now. For rookie 49ers defensive end Aaron Lynch, that meant batting the ball out of the air like a cat playing with its food, then clapping three times, taking a moment to celebrate before realizing his work had just begun.

There’s a Monster at the End of This Column