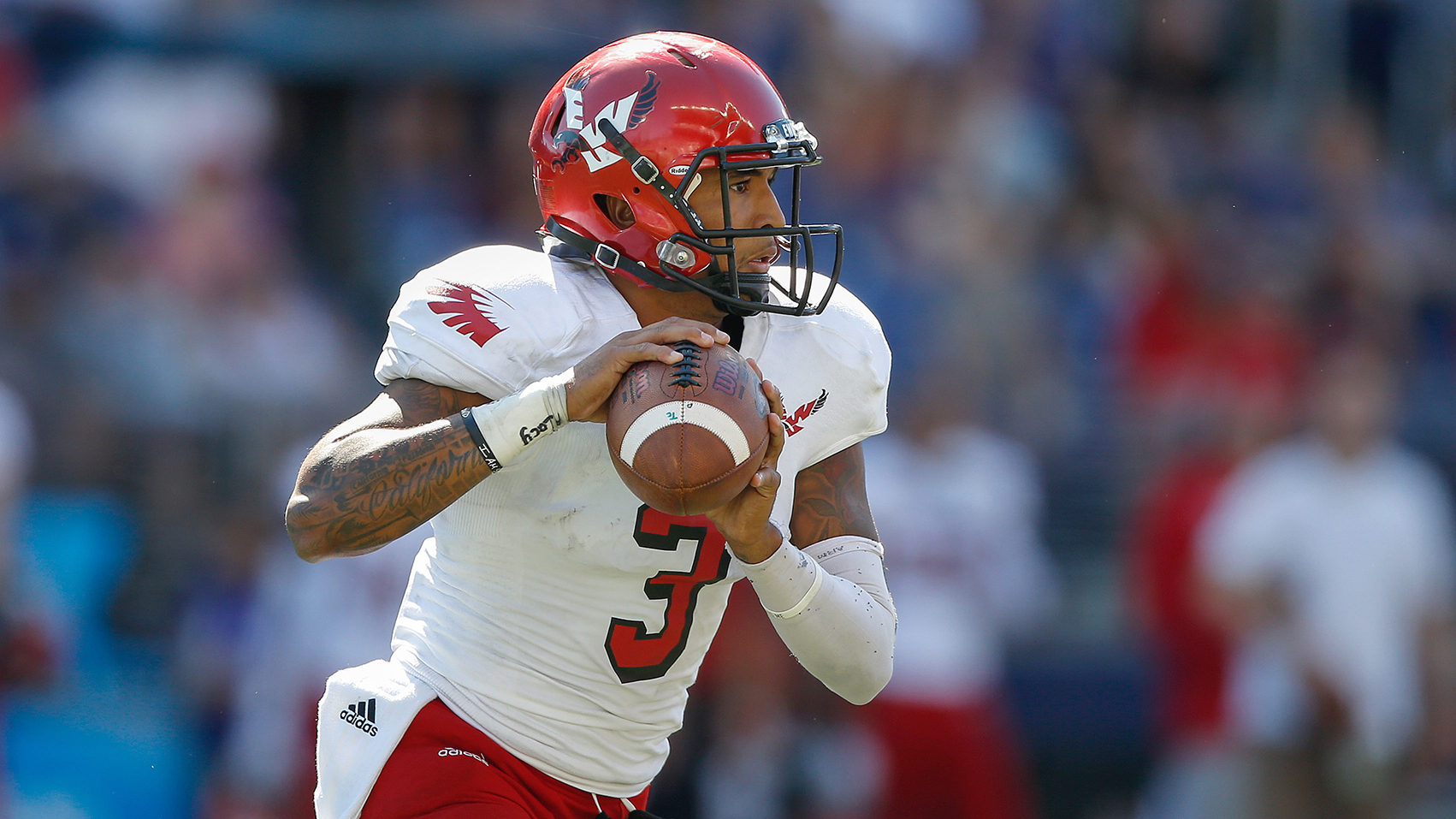 Back in late September, not long before Vernon Adams broke his foot and missed four games of the 2014 season, and long before the idea of transferring to Oregon had even congealed in anyone’s mind, I drove to watch him throw a football. It was a balmy evening in Northern California, and his Eastern Washington team was playing at UC Davis. What resulted was far from Adams’s most prolific effort, but it was still kind of beautiful to see, the way he slowly and subtly picked apart the Davis defense with short throws, completing every one of his passes in the first half, and then put the game away in the third quarter with a couple of well-placed deep balls.

Adams completed 23 of 28 passes that day for 298 yards and two touchdowns; the Eagles led 9-7 at the half and wound up winning 37-14. Numberswise, this was actually well below the mean for Adams, given Eastern Washington’s uptempo system: In a 49-46 upset win over Oregon State in 2013, he’d passed for 411 yards and four touchdowns; and in a near upset of Washington a few weeks before the Davis game, he threw for 475 yards and seven touchdowns (the Eagles lost 59-52). During the 10 games he played in 2014, he threw for fewer than 300 only one other time.

I went to Davis mostly because I wondered whether Adams might be able to make it in the NFL as an FCS-level quarterback who is well under 6 feet tall (and Adams is at least an inch shorter than the 6 feet he’s listed at on the EWU roster). I wanted to know whether the success of Russell Wilson had made things any easier for a largely unknown commodity like Adams to get a chance in pro football. Best as I could tell, the answer was largely a resounding no. The road for Adams, if he stayed at EWU, would have been difficult (he admitted to me that he sometimes has trouble seeing passing lanes since he can’t peer above the bodies of his linemen). But now that he’s at Oregon, I assume many of those questions will largely answer themselves over the course of the season, as Adams (presuming he wins the starting job) faces first-rate defenses like Michigan State and Stanford.

It’s almost stupidly easy to compare Adams and Wilson at this point. They’re roughly the same height and they wear the same number. Adams will now be a fifth-year transfer student at Oregon, just as Wilson once was at Wisconsin. But when I spoke to Adams, he brought up quarterbacks like Drew Brees and Tom Brady as much, if not more, than he mentioned Wilson. He is a precision passer who happens to be relatively mobile. He was never particularly tall for his age group, but his father pushed him to play quarterback anyway, and when he came out of high school in Southern California, FBS schools backed away from making scholarship offers because of those concerns about his height.

And this is why Oregon appears to be the perfect fit for a quarterback like Adams: He doesn’t fit the mold. Because none of Oregon’s quarterbacks have fit the mold up to this point, and because I imagine, as long as the Ducks are running Chip Kelly’s uptempo, run-oriented system, they never will. Even Marcus Mariota, one of the most graceful college quarterbacks I’ve ever seen play, is slowly slipping down draft boards as scouts and analysts fret almost reflexively about his place in a pro-style offense. This is what pro scouts do, and to be fair, this is a key aspect of their job: They find reasons to cast doubt on everything. But for Oregon, none of this matters; for the Ducks, a quarterback who is a dual threat, who can make accurate throws and run the ball when he needs to, is exactly what they’re looking for.

This was shaping up to be a transitional year for Oregon, a year of uncertainty and concern, and it still could be. It’s possible that Adams will struggle; it’s possible that it might take time for him to grasp the Ducks’ system, and that he might not have fully grasped it by September 12, when Oregon plays at Michigan State in the second game of the season. The Ducks also play on the road at Washington, Arizona State, and Stanford; it’s a difficult enough schedule that they might not make it back to the Pac-12 championship game, let alone the national championship game.