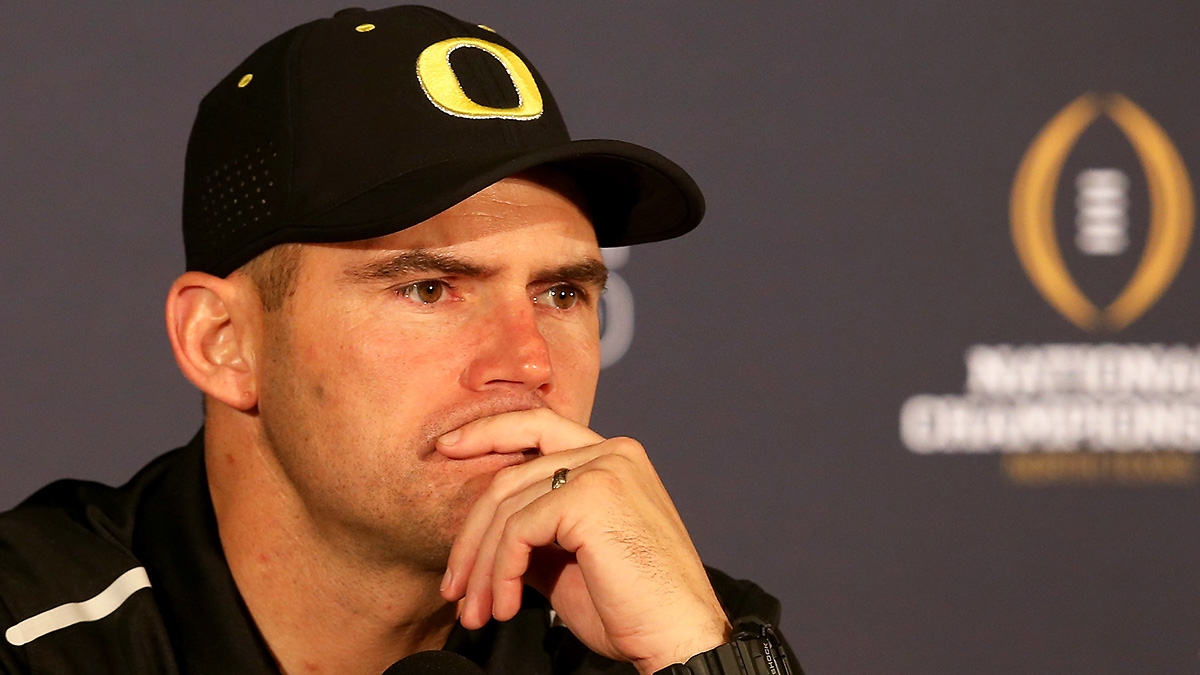 For a fleeting moment on Monday night, in the midst of a whirlwind opening touchdown drive that gave Oregon its only lead of the national championship game, I could see an alternate narrative unfolding around Mark Helfrich. I could envision a world in which one of the first questions directed to him at a press conference would not be about his communications with his head-coaching predecessor, Chip Kelly, as it had been the day before this game; I could envision a world in which a man who comes across as alarmingly down-to-earth and genial for a major-college football coach — a man who does not even tolerate yelling at his practices — would be elevated into the same genius realm inhabited by that predecessor.

Everything changed soon after this idea arose in my head. I remember thinking, when Oregon faced a fourth-and-3 on its own 45 on its ensuing drive, still up 7-0, still in possession of whatever mythical sense of momentum exists in sports, that maybe Helfrich should go for it right there. That maybe he should push the envelope, attempt to insert the dagger while he could. But he did not. He chose (perhaps wisely, in the moment) to punt, but then the Ducks punted again, and then they punted once more, the first time since 2009 that Oregon had punted three times in the first quarter. By the end of the period, Ohio State led, 14-7, and any momentum Oregon possessed had long since dissipated, especially once the Ducks did choose to go for it (and failed) on fourth-and-goal early in the second quarter.

It is impossible to talk about Oregon football without acknowledging that ephemeral sense of momentum. No other program has so thoroughly relied on momentum, both on and off the field, to deliver it to national prominence; no other program grounds its whole philosophy on the deathly impact of forward movement quite like Oregon has over the past half-decade. And that’s why, while it would be patently idiotic to declare Oregon’s 2014 season a failure, this loss still hit harder than it might have elsewhere, including at Ohio State. As amazingly proficient as the Ducks have become over the past several seasons, there is an undercurrent of angst that maybe this whole thing can still be stopped dead in its tracks. There is a worry that maybe the Ducks, after losing a big game every year, are not built to win the big games. There is a worry that if they can get pushed around when everything is at stake, then maybe somehow their formula for success is inherently corrupted.

“It’s not a house of cards,” Paul Swangard, managing director of Oregon’s Warsaw Sports Marketing Center, told me earlier this season. “But it’s still a fan base that doesn’t feel comfortable in their own skin.”

I have no idea if that feeling dissipates after a 13-win season and a Heisman Trophy and a Rose Bowl blowout of Florida State — one hell of a year, really — but I’m guessing it doesn’t. On Wednesday, Marcus Mariota declared for the NFL draft, which means that whatever safety net Helfrich had when he took the job is gone. This is Helfrich’s team now, and while there is little doubt about the man’s fierce intelligence (or his loyalty to the state where he was born and raised), there remains the overarching worry that maybe Helfrich is not big enough for the job, that maybe he is merely a cipher for another man’s ideas, that maybe he does not possess the necessary charisma for such a big position. And even as I write that, I recognize that it is a completely unfair statement, too, but such is the nature of the Oregon experiment: If the program can’t maintain that sense of constant and unflagging momentum, I’m not sure what its identity becomes. 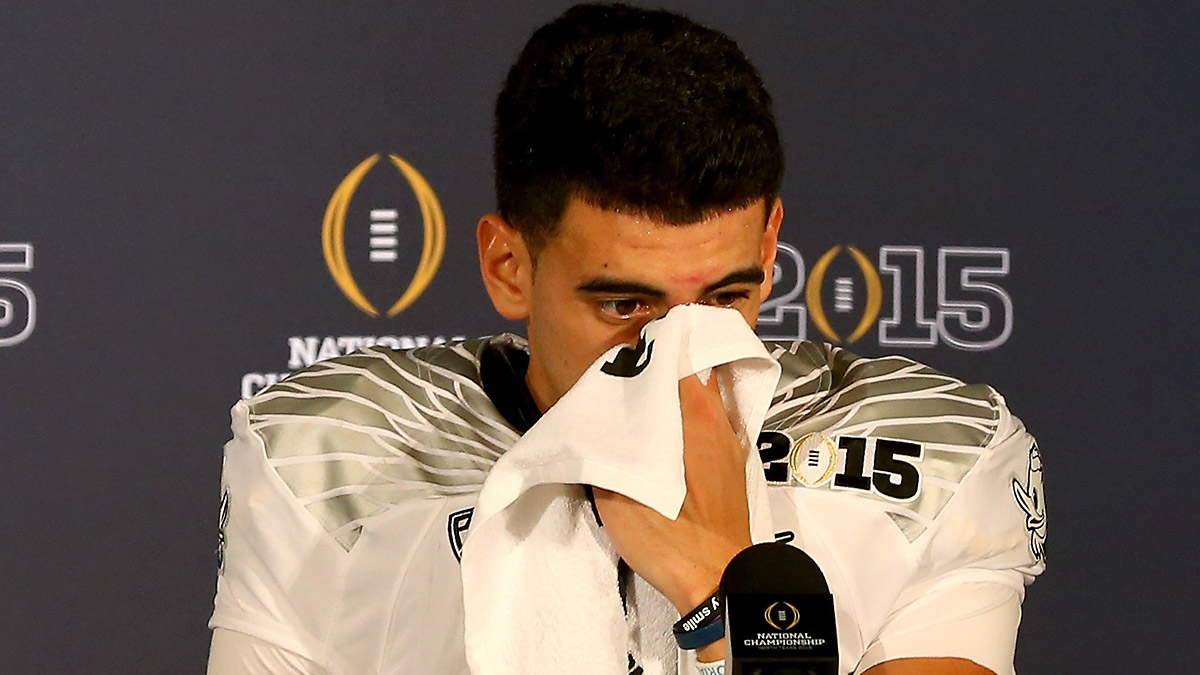 There has never been a case study in college athletics quite like Oregon’s, which is what makes it so inherently fascinating. The Ducks are the closest thing sports has to a living, breathing, corporate branding campaign, propped up over the past two decades by the largesse of Phil Knight, the same man who could be seen after the game embracing the opposing coach.1 Oregon’s uniforms are absurd and multifaceted for a reason: They’re a marketing construction, a selling point, and combined with the Ducks’ blur of an offense, they’re the primary reason Oregon has made it this far in the first place. With Mariota at quarterback, the Ducks were almost awe-inspiringly beautiful to watch when their offense was humming; but when they sputtered, they were immediately viewed as a fraud, as false advertising at work, as a postmodern popular trifle devoid of any real substance.

And that’s what was so dispiriting for the Ducks about the second half against Ohio State. They didn’t just lose; they were outplayed on both sides of the ball. The Ohio State defense, determined to slow down Oregon, managed to do just that by emphasizing physicality; the Ohio State offense, determined to run the ball, did exactly what it wanted, running the same play over and over again until the Ducks defense was worn thin. This appeared to be the year that Oregon had finally plugged its holes. This appeared to be the year that the Ducks had finally embraced a physicality that could propel them beyond teams like Michigan State and Stanford. But when it came right down to it, the same thing happened: Oregon became the finesse team that couldn’t play “real football” when it mattered.

“I think they just played their game,” Ducks running back Byron Marshall said afterward. “We tried to play ours, and it didn’t really work out.”

And this probably isn’t fair either, but this is the bargain that Oregon has made. If you sell yourself as something shiny and new and different, and then that shininess fails at key moments, people are going to ask whether that shininess might actually be the thing holding you back. 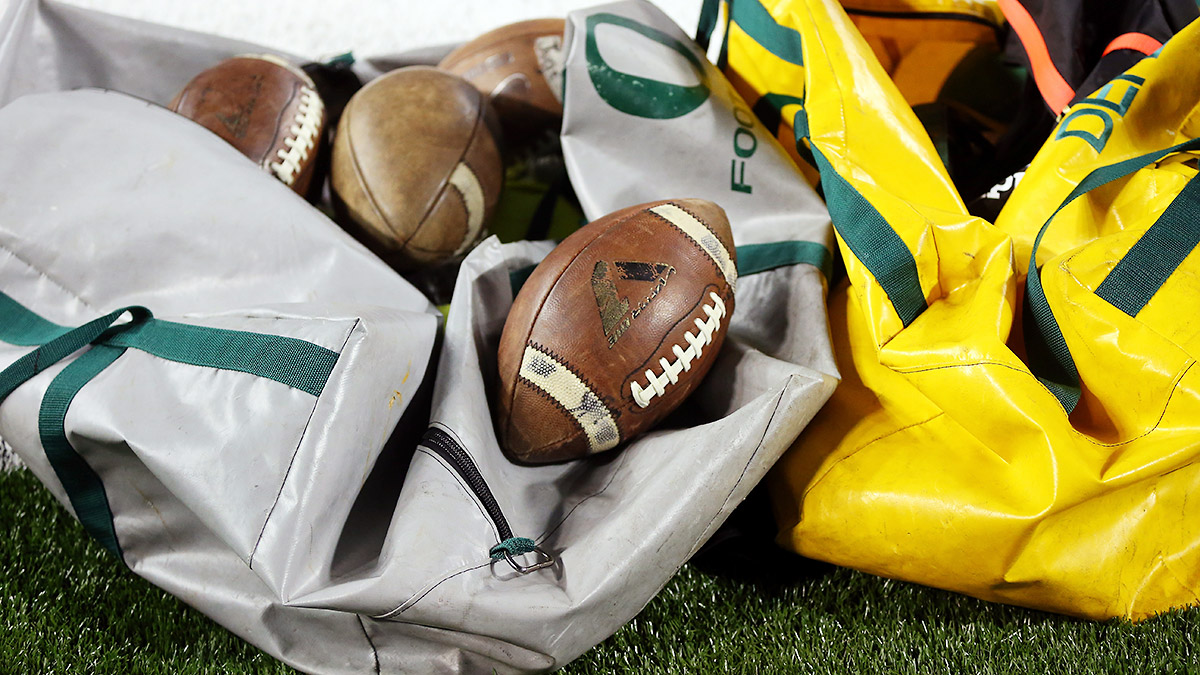 And maybe, in the end, such perceptions mean nothing. Maybe Helfrich was correct when he declared, in his postgame press conference, that Oregon’s facilities and infrastructure and coaching staff will continue to propel it forward; maybe Oregon can get back here sooner than we think. If anything, Helfrich is probably underrated as a coach, and if the Ducks find a quarterback to replace Mariota in their system, they may not regress for long.

But there are always existential threats in place. The Pac-12 wound up being slightly disappointing this season, but it probably won’t stay that way. There is the specter of Gary Andersen’s Oregon State and Chris Petersen’s Washington to the north, and the specter of Steve Sarkisian’s USC and David Shaw’s Stanford to the south. There is the possibility that Phil Knight will grow bored or impatient and begin throwing his weight behind other causes; there is the notion that because the Ducks don’t really do much recruiting in the South (they are currently 19th in the country in the class of 2015, according to Rivals), they will never quite be able to build an overtly physical “SEC-quality” defense, as Meyer has at Ohio State. There is the question of whether, at some point, those who find Oregon’s football opulence antithetical to the university’s mission will become the ones who win the day.

Without Mariota, next season is the closest the Ducks will come to facing a “rebuilding year” since they catapulted themselves into the upper echelon. It may be that they have all this figured out; it may be that Helfrich is actually a smarter college coach than Kelly, and that he will tweak the Ducks’ system just enough to keep it pushing forward. But what if the Ducks go 8-4 next season? What if they lose to Michigan State on the road in the nonconference schedule? What if they fail to win 10 games for the first time since 2007? What if their momentum is sapped, if only for a moment? What if they find themselves moving backward?

“We’ve bet the farm on making this one of the championship-caliber programs in college football,” Swangard told me, and now Oregon is here, unquestionably in that company. And it may very well be that the Ducks are here for good, but if there’s one thing we learned on Monday night, it’s that narratives are often here and gone in an instant.