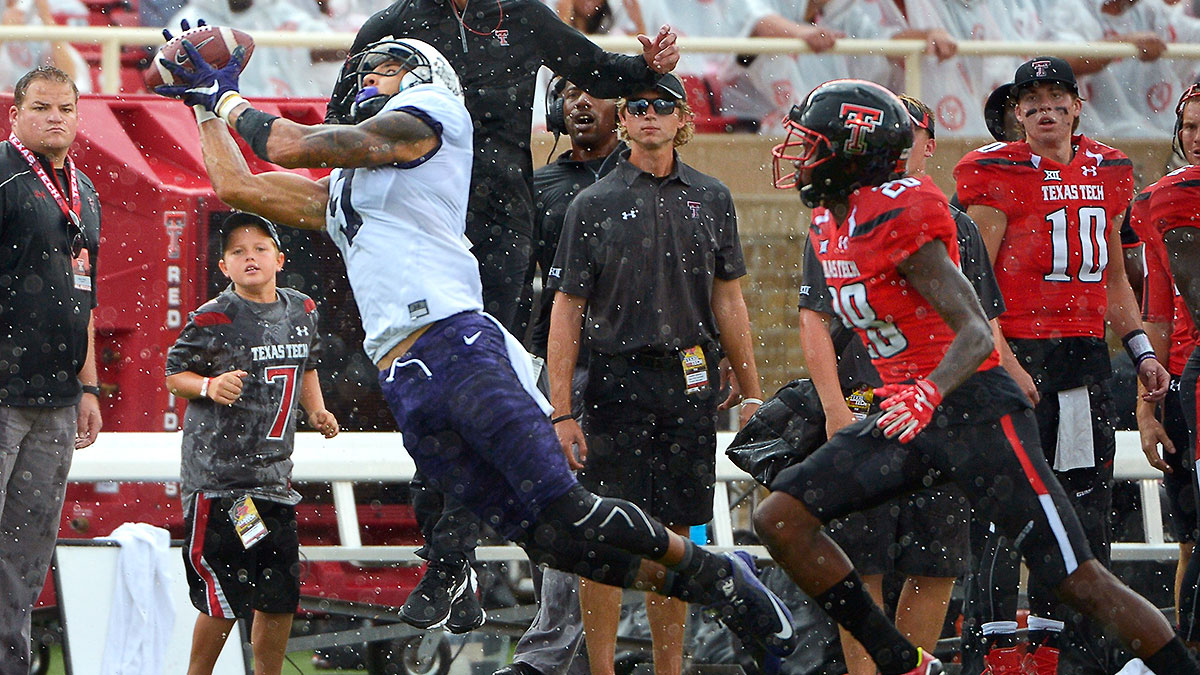 Maybe I’m not adhering to the inverted pyramid here, but my favorite moment in college football last weekend was one that ultimately meant nothing. It took place in the final seconds of the Big 12’s most recent display of near-pornographic offensive gratuitousness; it followed on the heels of the play that may wind up being remembered for generations, the play in which undefeated TCU scored a game-winning touchdown on fourth-and-goal on a tipped pass, the play that could go down as one of those convergences of proficiency and luck that defines every championship season in this ridiculous national pastime of ours.

So it was already a strange and incredible finish, but because this is the Big 12, things almost got way weirder. After Texas Tech, trailing 55-52 and attempting to forge one last dust-covered caravan through this postapocalyptic defensive wasteland, hurled up an unsuccessful Hail Mary in the final second, it got bailed out by a TCU penalty. So then Red Raiders quarterback Patrick Mahomes set up for another Hail Mary near midfield, and he scrambled to his left, and he spun back Johnny Football–style, and with a defender literally clinging to his leg he hurled a pass to a receiver standing on the TCU 45-yard line. That receiver then lateraled the football, not just to anyone but to a 6-foot-6, 308-pound lineman named Le’Raven (nevermore), who barreled downfield and for a split second looked like he might score the most memorable fat-guy touchdown in the storied history of fat-guy touchdowns … until Le’Raven lateraled the ball to another Texas Tech player careering along the sideline, who lateraled again to receiver Jakeem Grant, who finally ran out of real estate 10 yards short of the goal line.

Such is the nature of Big 12 football in the modern era: It feels almost deliberately performative, as if it were somehow being orchestrated on a soundstage, as if it were a Peter Berg production unfolding in the midst of an Explosions in the Sky guitar riff. And this is great for the Big 12, because the conference’s marquee games are now unmissable entertainment; but it could also be terrible for the Big 12, because it is that much more difficult to know what the hell is real anymore. 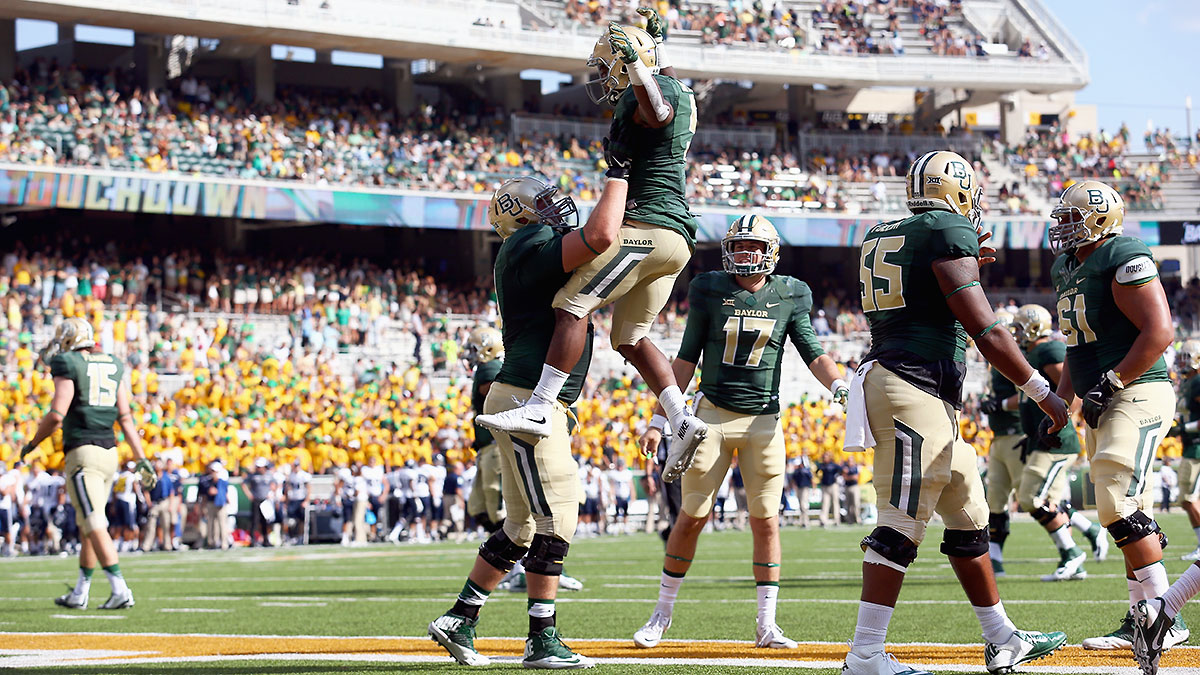 This whole thing goes back decades, really, but it came of age amid the proliferation of the spread offense among Texas high schools, amid the onset of the Bob Stoops era at Oklahoma, and, of course, amid the metaphorical tipping point, in September 2012, when West Virginia outlasted Baylor 70-63 in Morgantown, in a game that felt as if it were taking place in a vacuum-sealed zero-gravity chamber. Back then, the arguments over the spread as a passing fad were still popular among mainstream commentators. Three years later, those arguments are largely dead and buried, and the Big 12 has become ground zero for unapologetic laughing-gas football. In this conference, among the top teams, 70-63 is no longer the freakish outlier; 70-63 is the norm.

Five Big 12 teams are currently averaging more than 40 points per game (and a sixth, Oklahoma State, is a hair off that number), and three schools (TCU, Baylor, Texas Tech) are among the top five in the nation in scoring offense. And maybe this is the result of a small, early sample size skewed by the Big 12’s largely craptastic nonconference fodder, but I don’t see these numbers diminishing much now that the conference season is here. That’s not the way it goes in this league; if you didn’t learn your lesson on that front during the libidinous finish of TCU-Baylor last season, then maybe you never will.

But that’s exactly the issue. There is still a visceral repulsion felt by certain members of the college football establishment toward the Big 12’s particularly wanton displays of offense. I’m not saying this is the only reason a Big 12 team didn’t make the playoff last year — there is the inherently doltish thinking of a commissioner committed to the notion of One True Champion except when that champion suddenly splits into twins, and the cautiousness of a conference that isn’t yet willing to expand in order to facilitate a championship game — but I think it had to be a factor. I love these lewd displays that the Big 12 keeps offering up, but there’s something almost back-alley shameful about them. I imagine they render the conservative oligarchy that is the College Football Playoff committee a little red-faced.

Which is why any and every one of those top-tier Big 12 teams is seeking out a way to play even a passable brand of defense: The first one that does might prove impossible to gloss over in the end. 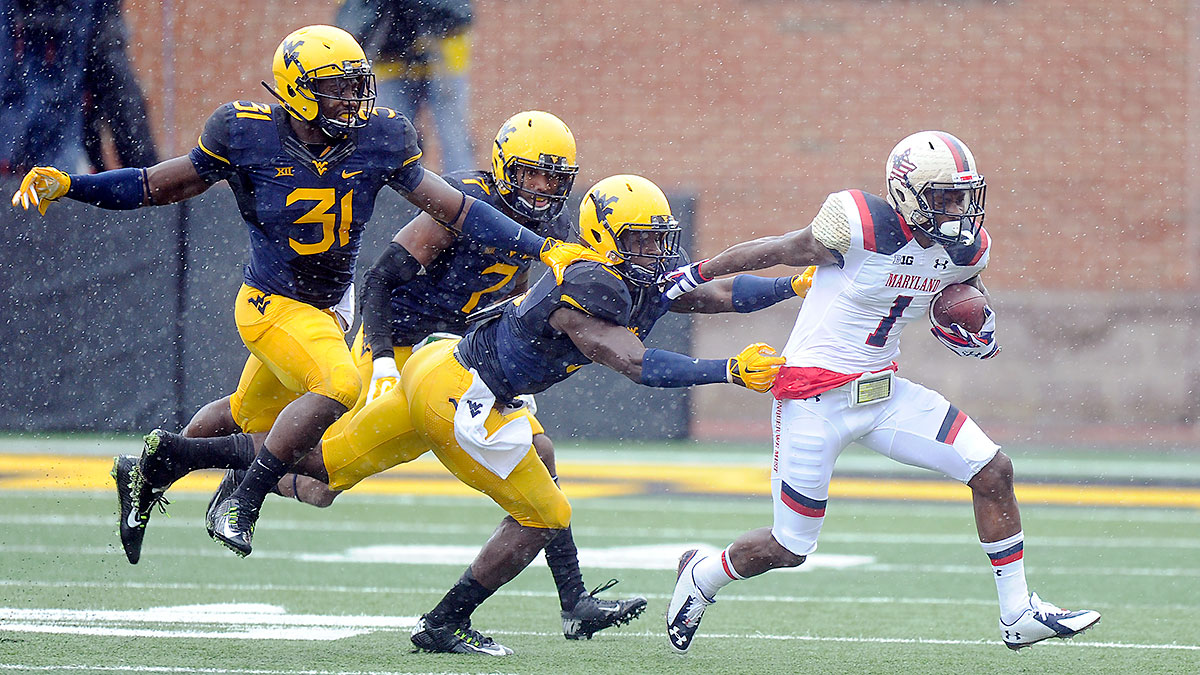 So who will it be? Who could it be? Probably not TCU. In fact, TCU has an excuse if it wends its way through a series of games like the one at Texas Tech: The Horned Frogs have already lost six defensive starters due to injuries. It’s understandable if they’re a bit of a mess, and their offense may be good enough to carry them through without a catastrophic defeat, but the degree of difficulty is going to be extremely high.

Oklahoma? The Sooners did engineer that comeback win against Tennessee, but everyone and their sister is engineering comebacks against Tennessee these days, and the Sooners also gave up 38 to Tulsa last week. Baylor? It’ll be hard to know what Baylor actually is until the Bears take their turn against Texas Tech on Saturday, but Baylor allowed 31 points to Lamar, so I imagine we could be in for another exercise in long-ball-laden promiscuity. Which leaves us with a few more distant possibilities, including my favorite twist of all: What if the coach who has often seemed the least concerned about trifling notions like defense is the one who finally manages to figure that notion out?

What if West Virginia, under a wild-haired, Red Bull–slugging offensive gambler named Dana Holgorsen, has rejuvenated itself so much in three years that it now has the best defense in the Big 12 under coordinator Tony Gibson? “There’s got to be a side of the head coach that gives all three sides of the ball (offense, defense, and special teams) some of my time and efforts,” Holgorsen said during the preseason. “I’m in the offensive room most of the time, but defensively we’ve come a long way.”

Travel down this hallucinatory path with me for just a second: The Mountaineers have allowed 7.7 points through their first three games, and are the most efficient Big 12 defense to date in ESPN’s FPI rankings. Granted, one of those wins was over Georgia Southern, but the final score was 44-0, and Georgia Southern has put up more than 40 points in each of its three games since. Granted, the biggest of WVU’s three wins was last weekend against Maryland, but the final score was 45-6, and the Terrapins had put up at least 27 in each of their first three games.

Over the next five weeks, the Mountaineers face the guts of this conference, one after another: Oklahoma, Oklahoma State, Baylor, TCU, Texas Tech. It’s a long shot, but hell, this is a conference built on long shots, which is why, at this point, the best bet may be on the wildest possibility of them all.