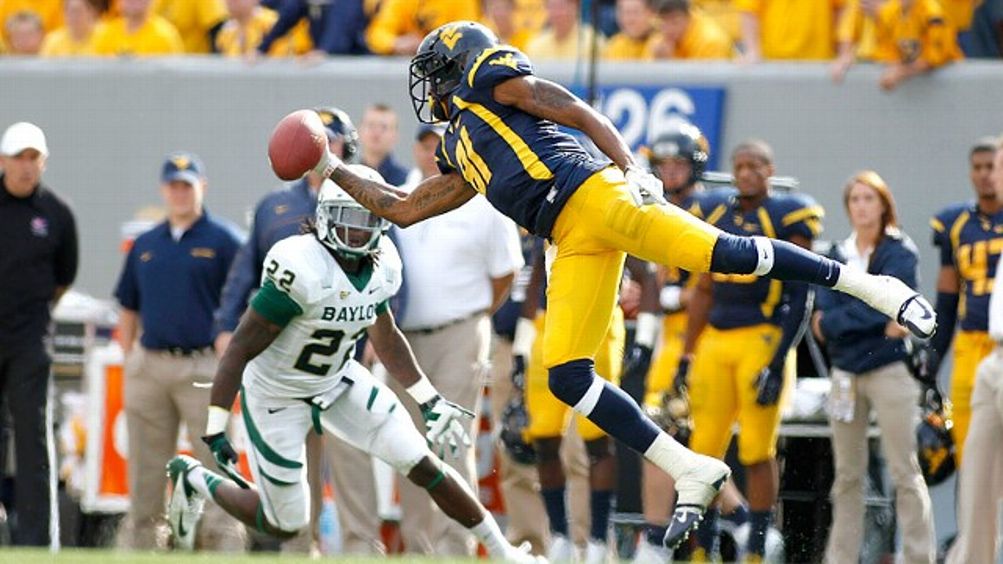 I cannot tell you if Dana Holgorsen is totally for real, but I can report that his hair is an epic and undeniable truth. Thirty minutes after the most methamphetamine-fueled1 college football game I’ve ever watched in person, the West Virginia coach strutted into the postgame press conference, his mullet spiked into a Noltean panorama of peaks and valleys, as if it had spent the afternoon waging war with a family of vengeful squirrels while the gray matter beneath it processed the subtleties of the Air Raid offense. “Well,” he began, “you guys witnessed the same things that I did,” and this was technically true, but I also imagine that it is a clinical impossibility to see the world through the eyes of Dana Holgorsen, who is nothing quite like any other football coach we have ever seen.

A compulsive Red Bull drinker and occasional skydiver, a divorcé who reportedly prefers to reside for long stretches in hotel rooms, Holgorsen hails from a coaching tree replete with iconoclasts and tricksters, a lineage of those who have (both literally and figuratively) stretched the boundaries of the game, from Hal Mumme to Mike Gundy to Mike Leach. Holgorsen was hired away from Oklahoma State to be an assistant-coach-in-waiting at West Virginia under the late Bill Stewart; he survived an apparent character-assassination attempt after he chose to chill out on a park bench near a dog track and casino complex at 3:13 in the morning; and now, in his second season, he’s installed an offense at WVU that so upturns convention it hardly feels like real-life football at all.

On Saturday, for the second time in less than a year, Holgorsen’s offense put up 70 on an opponent, but what made this particular performance remarkable was that his team needed every one of those points, because they were playing Baylor, which runs a variation of a similar offense, which meant you had two offensive-minded coaches2 going up against a pair of defenses that had largely been relegated to hierarchical afterthoughts. I would say it resembled a video game, but it was probably less realistic than that: I feel like video games have advanced to the point that a Cover 3 actually works much of the time against bomb-chucking yahoos, and you couldn’t say the same thing about this game. After Baylor quarterback Nick Florence hurled a deep pass on the last play of the half and a receiver somehow broke through the soft retaining wall of a prevent defense, the score was 35 apiece. At one point, West Virginia took a 56-35 lead, and still there was no time to rush to the bathroom because you knew it would tighten up again. On the radio, the local broadcasters apparently started calling the game like a tennis match: Who can hold serve?

Neither team could rush the passer with any consistency, and receivers kept breaking into the clear in ways that seemed completely unfathomable outside of an under-10 youth soccer tournament: Trailing by three scores, Baylor drove 94 yards for a touchdown in under two minutes, and then the Mountaineers’ insanely prolific quarterback, Geno Smith, completed a pass to receiver Stedman Bailey, who broke off the line and was left completely uncovered. Bailey finished with 303 yards receiving and five touchdowns and wasn’t even the game’s leading receiver;3 Smith completed 45 of 51 passes for 656 yards and eight touchdowns, and appeared entirely unimpressed by those numbers after WVU’s 70-63 victory in the school’s first Big 12 game. 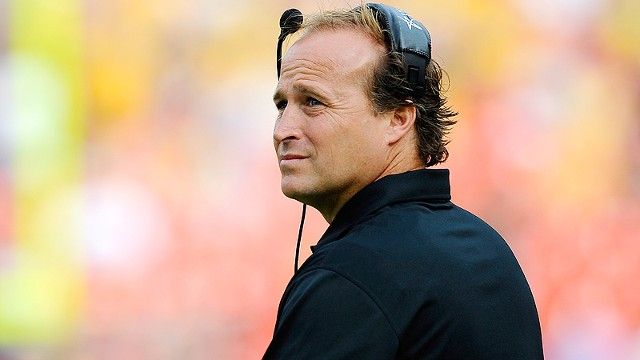 “I would have been happy for a 6-3 win,” Holgorsen said, and then a few seconds later, asked to expand on the difference between the Big East and the Big 12, he harked back to a game last season. “[They’d] get over the ball, sit there, and stare at the sideline for 30 seconds,” Hologorsen said, and you could see how much this bothered him, and how much style matters to him, and why I don’t really think he would have been content with a 6-3 win at all.4

I can’t say for certain, but I like to think it’s important for Holgorsen to succeed without adhering to the conservative tropes established over decades by men like Woody Hayes and Bo Schembechler and Bear Bryant. He, like Mike Leach before him, has always been perceived as an outsider, and in a state like West Virginia, where perception has long been a problem, his iconoclasm might be just what they need to break free from years of typecasting.

A confession: I, like many others, spent my childhood trafficking in broad stereotypes about West Virginia, a neighboring state whose backwoods branding made us feel better about our own rural central Pennsylvania surroundings.5 When my friend Chris moved to West Virginia during high school, we mourned his passing as if he’d been adopted by wolves; when another friend moved there post-college, I would visit him in Charleston and we would drink ourselves into a stupor and hang out in seedy nightclubs, bracing for an abduction into a nightmare straight out of a James Dickey novel. This is ridiculous, of course, but these are perceptions the majority of West Virginians have long endured, and I can hardly blame them for feeling put-upon. “People say ‘West Virginia,’ and then go, ‘Ha, ha, ha, punch line,'” said Mike Casazza, who has covered WVU football for the Charleston Daily Mail for the past decade (and recently authored a book about it). “They’re stereotyped and prejudiced against [it], and these things are reflected onto their football team.”

In fact, much of what I knew about the state growing up had been gleaned from televised football games. Penn State’s visits to Morgantown in the ’80s were roadhouse cage matches: I heard horror stories about visiting fans getting pelted in the noggin with beer bottles; I read about the ritual torching of couches. The Mountaineer fan base despised Penn State, for reasons I was too naïve to comprehend back then: Not only were the Nittany Lions fronted by a coach whose outward self-righteousness bothered the hell out of them (perhaps rightfully so, in retrospect), but from 1959 to 1983, the two teams played every year and West Virginia did not win a single game.

The Mountaineers finally broke through in 1984,6 and then they pounded Penn State in 19887 on their way to an undefeated season under phenomenal quarterback Major Harris before losing to Notre Dame in the Fiesta Bowl. This is about as good as it’s gotten for the Mountaineers ever since: They’ve been good, and at times very good (as with Pat White at quarterback in the mid-aughts), but not quite good enough to take too seriously (they’ve never finished higher than fifth in the final polls). “People think something big can’t happen here,” Casazza told me, and this is why West Virginia’s leap from the aimless Big East to the Big 12 was such an ego boost, and this is why 2012 is such a crucial season for a program that has long subsisted in the background of the national scene, yearning for validation.

I don’t know if the Mountaineers can win a national championship merely by outscoring everyone they play; it seems like a dubious proposition, starting next week when they travel to Austin to play an undefeated Texas squad. (It wouldn’t surprise me if the Mountaineers lost two games and Smith still ran away with the Heisman Trophy.) But it always surprises me how much vitriol there is toward offenses like the Air Raid, and how attacks like these are condemned, and how games like Saturday’s are dismissed as a brand of fetishistic, pornographic filth.

I am not unaware of Alabama and LSU, but is it time to concede, given Baylor-WVU — and given Georgia’s 51-44 win over Tennessee a few hours later, in what I believe still counts as a Southeastern Conference game — that these sorts of impenetrable defenses are the exception rather than the rule in college football? What if wide-open offense is not some measure of college football’s inferiority, but simply part of the inherent evolution of the game, given both decades of rules changes and the ongoing concussion crisis? What if offenses like Holgorsen’s serve as a pathway to mitigate the violence of football without rendering the sport obsolete? And, if we put aside the preconceptions we grew up with in the era of Woody and Bo and Bear, how is 70-63 somehow inherently less valuable than 6-3?

Afterward, I asked West Virginia’s offensive coordinator, Shannon Dawson, whether a game like this was good for college football.

“You tell me,” he said. “If that wasn’t exciting, you need to check your blood pressure.”

I didn’t know much of anything about Dawson beforehand — I didn’t even know WVU had an offensive coordinator other than the head coach — but he struck me as the sort of radical who fits right in on a Holgorsen staff: He slouched in his seat, wearing a pair of jeans and a sport coat, and he bore a certain resemblance to Jeremy Renner; according to Holgorsen, Dawson is “less conservative” than he is, which I have to imagine is like trying to outflank an anarchist to the left. “It’s a men-tal-ity,” Dawson said of his offense, when I asked whether more teams might adapt it after seeing what the Mountaineers were accomplishing with it.

There remain aspects of the West Virginia mentality that are unique to the state’s heritage. When athletic director Oliver Luck — who brought Holgorsen to Morgantown while simultaneously overseeing his son’s quarterbacking career — grew tired of drunken fans departing at halftime and reloading in the parking lot, he didn’t stop people from leaving the stadium and coming back in, as other schools have done. He embraced counterintuitive thought and began selling beer at the games, which, amid the sacred hypocrisy of college football, is still pretty rare (alcohol-related incidents have actually decreased since, according to Luck, and WVU made half a million dollars in sales last season — though there is a segment of the student body that still enjoys setting fire to inanimate objects).

“You guys didn’t believe me when I told you about the style of play [in the Big 12],” Holgorsen told the local media afterward. “The situation was fantastic. It was a great moment for West Virginia.”

I cannot say whether this was also a great moment for college football, or whether Holgorsen’s offense will fizzle out sooner rather than later, or whether the move to the Big 12 is some sort of tipping point in terms of outsider perceptions of West Virginia as a state too small and backward to spend much time taking seriously. I cannot really say anything definitive about what last Saturday afternoon in Morgantown meant, except this: For a football men-tal-ity, this was a hell of a lot more fun than 6-3 will ever be.