How Serge Ibaka Made the Leap 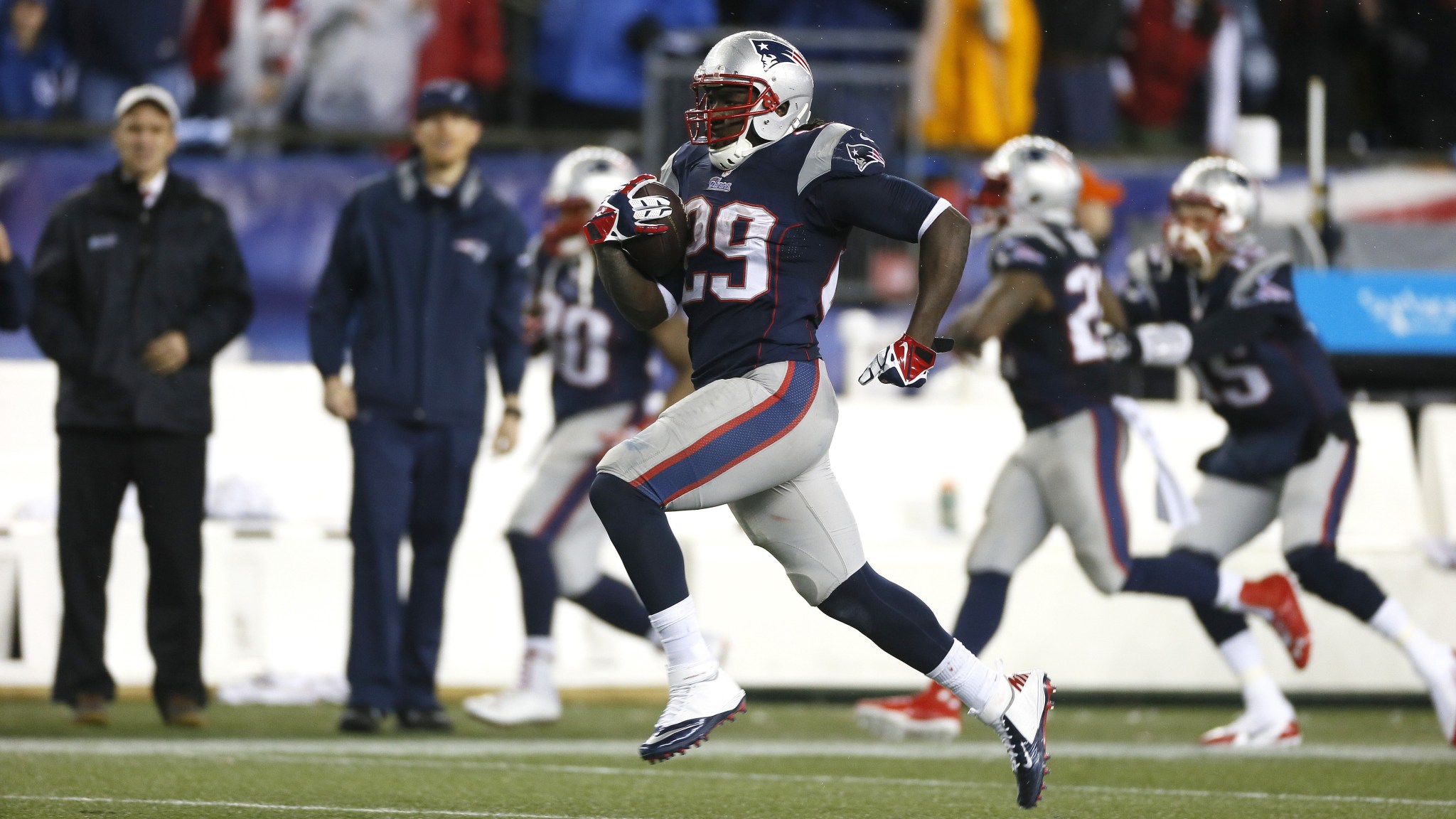 That smile, the one LeGarrette Blount was aiming out across the Patriots locker room in the general direction of the sudden (and mysterious) presence of Charles Barkley, wasn’t just because of New England’s playoff win. This would be true even if the win came in your first playoff game, which, for Blount, it had. This would be true even if you were to enliven your first playoff game with 166 yards on the ground and four touchdowns, which Blount had just done. This would be true even if 73 of those yards had come on a single game-shattering run from scrimmage, the videotape of which would now be hanging in the Louvre if Dan Dierdorf were appointed curator. This would be true even if all you wanted to talk about was how far LeGarrette Blount had come since he ascended into YouTube eternity on the worst day of his football career. This was too much of a smile for all of that. This was a smile for three weeks from now, a smile aimed at a function room in New Jersey, a smile that you give to the thousands of reporters who descend upon a single football game during a single mad week. Some of these reporters actually will be TV supermodels. Some of them will be dressed as carrots. This was a smile for that day. This was a smile that took in the whole damn circus that is unfolding before him, and into which LeGarrette Blount is rapidly playing himself.

And speaking of the whole damn circus, did I mention Charles Barkley was there?

“I don’t know why it’s going so well,” Blount said. “But I’m happy it’s working out here. I’m just trying to stay humble and work as hard as I did when I first got here. I’m still trying to do the same thing.”

The 43-22 final that New England hung on the Indianapolis Colts on Saturday looks on the surface very similar to a dozen other playoff wins the Patriots have had since they began their championship run in 2001. But the Patriots themselves look very, very different. Saturday night, Tom Brady completed 13 of 25 passes, and did not throw a touchdown pass in a playoff game for only the fourth time in his career. Instead, over the past several weeks, as the injuries have piled up, the Patriots have begun to channel their inner Woody Hayes, pounding away behind an offensive line that is the only unit on the team still relatively healthy. This has changed the team’s look almost entirely, and it has given to the Patriots an aspect of iron that seems drawn from the days when games were on black-and-white television.

(And, as much as it may pain a great number of people around the country, the way he has transformed this team in the face of so many critical injuries, especially on defense, makes this the greatest coaching job of Bill Belichick’s career, no matter what happens next week. Vince Wilfork and Jerod Mayo were lost for the season, and Brandon Spikes apparently has picked the postseason to turn into Brandon Spikes again. This is to say nothing of Brady being down to seeds and stems again for wide receivers. In response, Belichick dials up the time machine and gives us the 1966 Packers. This is quite a thing.)

Blount has been central to the transformation. At 6 feet and 250 pounds, he is bigger than anyone faster than he is, and faster than anyone bigger. “I’m happy he’s on our team because I definitely wouldn’t want to be hitting that guy,” said New England defensive end Rob Ninkovich. “He’s like my size.”

“He’s got that combination of size, power, and quickness and speed,” Belichick said. “He’s not a fullback; he’s more than that. He’s not a scatback, either. He’s got power. He can run hard. He can make guys miss and he can go the distance … He’s an explosive player.”

Two weeks ago, against Buffalo, Blount’s remarkable versatility allowed him to put on a display that was just two short steps from being positively garish. He rushed for 189 yards and he ran back two kickoffs for a total of 145, which is the kind of thing Gale Sayers used to do, except that Sayers was a gazelle and Blount is … incredibly not. On Saturday, in miserable conditions, it was Blount, along with Stevan Ridley and Shane Vereen, who made Brady’s play fakes credible and helped spring Julian Edelman and an assortment of tight ends open just often enough.

But it was Blount who made the signature play, not only breaking open the game but providing a clear statement of his team’s new identity. With Andrew Luck having a terrific third quarter, Indianapolis had closed the Pats’ lead to 29-22 when Luck hit LaVon Brazill straight down the seam from 35 yards away. The two teams then banged away futilely at each other as the third quarter ended and the fourth began. Indianapolis punted and, with 13 minutes left, the Patriots took over at their own 27.

Brady sent Blount over the right side. Right guard Dan Connolly blew up the whole middle of the line, and his counterpart, Logan Mankins, came across and just buried a linebacker. Blount made one move toward the sideline and was gone. By the time he got to the Indianapolis 20-yard line, he was checking himself out on the big board behind the end zone because he really didn’t have much more to do.

“I didn’t look at the big screen until I got free,” Blount said. “I looked to see if anybody was close to catching me, and they weren’t. And the rest is history.”

And then the smile, the long dreads framing a face that comes alight again, the smile that reaches into the immediate future, which is certainly brighter than the immediate past. In many ways, LeGarrette Blount would rather the rest not be history, because he was history before he was famous, and history is not what it used to be. 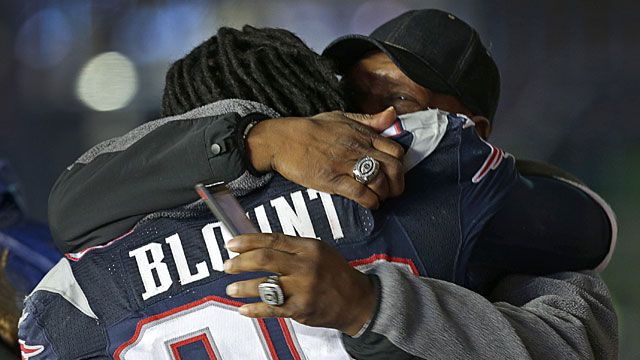 We live in an age in which technology has replaced immortality with reiteration, eternity with simple repetition. Things live forever. Events live forever. But the people in the events change, and very often that doesn’t matter, because the events are immortal because generations yet unborn can click and see them, over and over again. History becomes a stuttering loop, for good or ill.

Four years ago, Blount was a running back at the University of Oregon. He was also a pain in a number of asses. In 2008, his first season in Eugene, he got himself suspended for missing some workouts, but he seemed to get the message and repaired his relationship with the coaching staff. That year, Boise State came to Oregon’s stadium and beat them in a game that crossed the line from chippy into savage. The following summer, Blount was quoted saying that Oregon owed the Broncos an “ass-whuppin'” when they played in the 2009 season opener. That game proved to be even dirtier than the one the year before, and Boise State won again. As the Broncos and Ducks were leaving the field, Boise State’s Byron Hout came up and jaw-jacked Blount, who responded by punching Hout in the head. A general melee ensued; at one point, Blount said, an enraged Boise fan came at him with a chair.

At first, Oregon coach Chip Kelly suspended Blount for the year; eventually, Blount was able to return and play in the Rose Bowl. But that wasn’t the real punishment. It used to be that miscreants were put in the stocks in the town square, where the pious townfolk could come and jeer and feel superior. We have a new form of pillory these days. It’s called YouTube.

It wasn’t just that LeGarrette Blount threw a punch. It was that he threw an unforgettable punch. Hout went down like a sack of bananas and, within days, every drone in every cubicle in every office in America had seen what LeGarrette Blount had done. He was defined in a million minds. He was worse than immortal. He was reiterated, over and over again.

He bounced around in the pros, starting with Tennessee and almost earning a spot with Tampa Bay, only to have the Buccaneers trade him to New England last April. He has taken to the place — and to the way things are done in Foxborough — wholeheartedly. He talks about the Boise State incident, but very circumspectly and always in a low, serious voice. He spends most of his time complimenting his offensive line. “I’m loving it,” he said. “To come out here and get a win against this great Colts team, it just shows you how good our team can be.

“We’ve got to go back at film. We probably made some mistakes, some things we have to correct, but, for the most part, our offensive line had an amazing performance. In my eyes, they’re all Pro Bowlers.”

Nicely said, young Padawan. Your training is nearly complete. This is a place of regimen and structure. It is a place neither for cheap fame nor for the artificial infamy manufactured in the era of reiteration. This is a place in which you can build a future and leave immortality far behind.