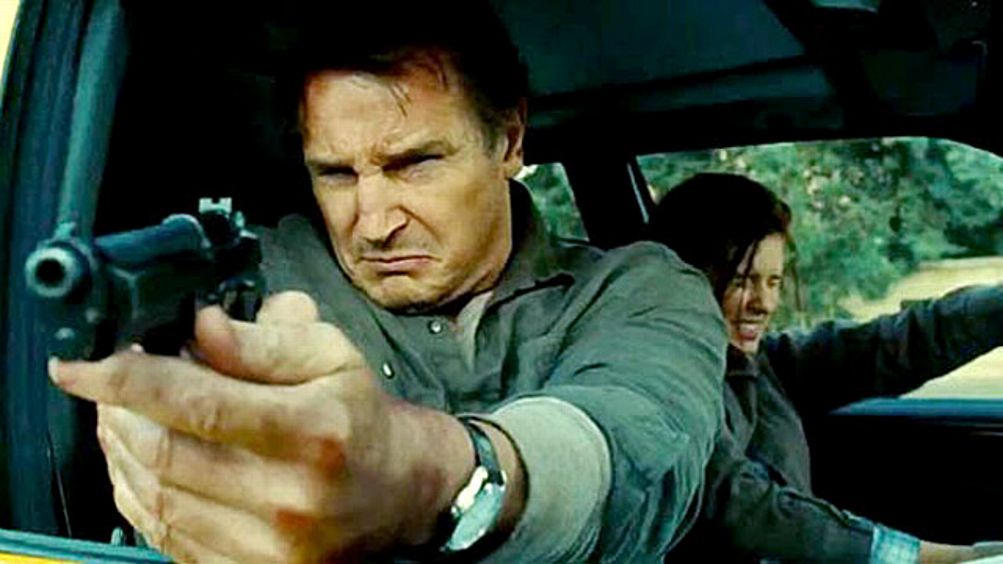 As the good book says, “Let ye who has never run pell-mell through a foreign country, murdering at will, cast the first stone.” So far be it from me, a timid traveler who has never once commandeered an innocent taxi driver’s cab at gunpoint, to judge the behavior of Bryan Mills, the retired but still lethal CIA agent whom Liam Neeson returns to play in Taken 2. Instead, let me describe what is probably the most delightfully Ugly American moment in the film (avert your eyes now if you prefer your bloody fantasies of imperial conquest unsullied by spoilers) and let you draw your own conclusions.

The setting is Istanbul, long the symbolic and sometimes literal bridge between the shining Christian West and … whatever unknown heathen peoples lie beyond. (Murderous Albanians? This movie gave me the strong impression that it was murderous Albanians.) Bryan and his wife have been taken.1 The kidnappers — er, takers — have been kind enough to pause in their abduction — excuse me, taking — long enough to allow Mills to make a phone call informing his daughter that her parents are about to be hooded and thrown into the back of a van; actually, they’ve even been courteous enough to leave Bryan with a spare cell phone in his sock, which, once he’s been strung up in an Albanian torture dungeon, he uses to call his daughter back and give her directions to where they’re being held.

How will she find him, you ask? Well, it’s simple, really. Bryan instructs his daughter — 29-year-old Maggie Grace, here playing Kim, a college student without a driver’s license — to retrieve a handful of grenades from the weapons suitcase in his hotel room and then climb to a rooftop. The idea is that she’ll just toss a grenade, her father will listen for the detonation echoing across Istanbul, and then she’ll toss another one, and in this manner, they will echo-locate one another, like two homicidal dolphins crying out to one another across the deep, until father is reunited with daughter. What’s a few blast craters in a city that has endured far worse conquerors in the long years since its founding in 660 B.C.?

So yeah. Taken 2 also features Neeson saying, “I need you to listen to me very carefully” about 50 times, the obligatory torture scene where an Albanian tough erotically sniffs at Famke Janssen’s face, and some of the worst expository dialog ever crafted by producer and co-screenwriter Luc Besson, which — as anyone who has seen, say, last year’s Colombiana knows — is really saying something. The film is directed by the Besson acolyte Olivier Megaton, who is to his mentor approximately what a scarecrow is to a real man. It is among the worst movies I’ve seen all year, though its bad taste and overwhelming trashiness are so total as to be sort of entertaining. That is, as long you are entertained by things that conform to every known stereotype about our blissfully ignorant American selves and those who might one day come for our wives and daughters.

It’s not even remotely Neeson’s fault, but in his 2012 we have the whole sad story of movies as they’re being made now. Neeson’s year began with The Grey, in which he played the wolf-slaying alpha of a human pack of wildcatters attempting to survive an Alaskan plane crash. The Grey was a bracingly effective and surprisingly serious $25 million action film that made more than $75 million in theaters — largely on the strength of Neeson’s lethally capable character, which was more or less borrowed wholesale from the original 2008 Taken and the subsequent series of grim, purposeful movies Neeson’s starred in since. After The Grey came Wrath of the Titans, the sequel to 2010’s Clash of the Titans, for which Neeson again donned a filthy lamb’s pelt of a beard as Zeus and basically begged onscreen to be murdered out of his franchise contract (the Kraken, or something — honestly I forget — obliged). In Battleship he played the commander of the United States Pacific Fleet, but basically reprised his Taken role again: He was the violently protective dad to the Brooklyn Decker character Taylor Kitsch was romancing. The role was of such importance to the actor that Neeson only realized he was due on set weeks after the production started filming; “I spoke to the director, as he was shooting a scene I was supposed to be in,” Neeson told Esquire, “and I thought, Christ, they’re working, they really need me already. Anyway, I flew out there, to Hawaii, and I was onboard the USS Missouri the next day, dressed up in these naval whites.” You honestly can’t tell the difference. Then it was back to franchise duty — he had a cameo in The Dark Knight Rises — before this week’s Taken 2.

So, to recap: one modestly budgeted quality action film, one financially and artistically disastrous blockbuster based on a board game, and three sequels. For the guy who once played Oskar Schindler. Feel free to go wander off and burst into flames.

And Taken 2 (which was made not in Hollywood but by Besson’s French EuropaCorp studio) has all the maddening signature of an industry that at this point occasionally out-and-out taunts us with its lack of originality. In a particularly pointless appropriation, the film uses not one but two songs from the Drive soundtrack; the credits roll to the howling white-man’s overbite of The Internet Explorer Song. Neeson is forced to repeat lines of dialog more or less verbatim from the first Taken. And not even he can lend dignity to a scene in which, while hooded, he tries to track the path of the vehicle he’s in by recounting to himself the amount of seconds passing and the noises he hears outside of the car: “1 … 2 … 3 … 4 … Right turn …1 … 2 … 3 … 4 … Boat … Hammer on metal … Left … Gear shift to second … Birds.”

BIRDS. Liam Neeson had to say that out loud.

B ut Neeson’s late-career rebirth as a guy who lends gravitas and a sense of moral purpose to Hollywood films that otherwise would have neither has been a welcome one. The original Taken wasn’t a quality movie that just so happened to showcase a heretofore unknown side of its star; it was a cynical exploitation flick that lucked into Neeson at the exact moment he was leveraging a lifetime’s worth of exactingly serious roles into an entertainingly murderous new character. Sure, both the Taken films are women-in-danger movies masquerading as rah-rah Americans Abroad fantasies, but look at Michael Collins fuck those dudes up!

With the first Taken came the birth of a new character2 that transcended whatever movie Neeson happened to be in. Whether bare-knuckle wolf-boxer in The Grey, somehow helping sell January Jones as a professional assassin in Unknown, or Hannibal in The A-Team, he was recognizably himself, or at least a very specific, lethal version of himself, a throwback to the ’80s days when, in the words of Entertainment Weekly‘s Darren Franich, “actors like Sylvester Stallone and Arnold Schwarzenegger were their own franchise.”

And the new Neeson character — always a bit better than whatever ugly situation he finds himself in, good with his hands, scourge of wolves everywhere — is a welcome one; in recent memory, only Jason Statham comes close to having established something similar. So really Neeson’s 2012 story is as much about an encouraging kind of career longevity and studio ingenuity — someone had to recognize that character and start writing movie after movie for him — as it is about the five not always great, or even good, films he’s appeared in this year.

We should enjoy it while it lasts. Because while Neeson’s late-career reinvention (which also apparently involved turning down Lincoln, on account of being “past my sell-by date”) may be an example of Hollywood creativity, it’s also very much the product of a different era. The new Neeson works because of the old Neeson; this is an actor who had 30 years’ worth of good-to-great roles to build the singular onscreen presence and world-weary gravity he now visits upon the animal kingdom and sex traffickers and whatever other obstacles screenwriters can devise for him. Younger actors, like Neeson’s Titans co-star Sam Worthington — who seems doomed to conduct his entire career in front of a green screen — are unlikely to get the same kind of seasoning and experience. Neeson does indeed have a very particular set of skills, as the ads for Taken 2 incessantly remind us. He may be the last of his kind.