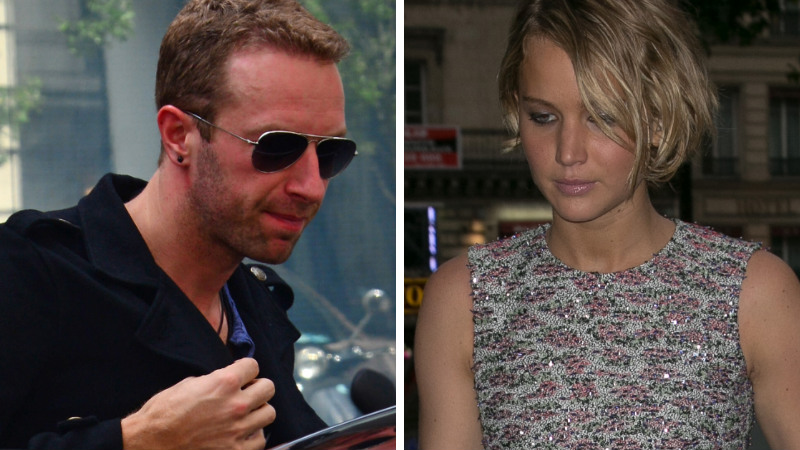 If you signed off the Internet early this past Friday and were off sipping some fruity cocktail and enjoying the waning days of summer, you may have missed E!’s announcement that Chris Martin and Jennifer Lawrence are dating. Yes, that’s right — Mr. Coldplay and your celebrity best friend are a couple. “Page Six” needs to check its Goop sources, since its earlier reports intimating any kind of reconciliation between the still-very-consciously-uncoupled Gwyneth Paltrow and Martin are now quite hollow. The story comes just a couple of days after Us Weekly published a story about Paltrow’s romance with Glee producer Brad Falchuk. Was that report an incentive for Team Chris Martin to comply here?

Interestingly, this is E!’s second J-Law exclusive of the month. It also broke the news about the split from her on/off boyfriend of three years, Nicholas Hoult, and the E! item about Martin and Lawrence stands as definitive for now. There are no other additional details nor does any other site have a denial. Is there someone from Lawrence’s crew funneling information to E!? I’m not saying there is, I’m just asking questions. Media machinations aside, though, this is the first juicy piece of news about Lawrence since she entered the gossipsphere. Until this point, she’s been fairly uncontroversial and well-liked. Is this coupling wise for the ascending queen of Panem — and America?

Point: This Is Great for Jennifer Lawrence!

Had you placed a bet on Martin’s first confirmed post-Goop public girlfriend, would Lawrence have made the top 10 contenders? Her name never circulated in the swirl of rumors that surfaced since the conscious uncoupling email in March. Sure, she was nearly affianced to Hoult for much of the year, but her aura never even came close to this Goopy melange. The immediate front-runner was Alexa Chung, who Martin supposedly met last summer at Glastonbury and was spotted with as recently as May. On the surface, she seems like Martin’s type — waifish, rarefied, and associated with a lifestyle as much as with a particular skill or talent. (I’m not sure what she is best known for in the United States. She began her foray into celebrity as a model, which evolved into a TV hosting career, before returning to fashion with gigs like her own Madewell line.) These are all attributes you could use to describe Paltrow, too. Plus, she’s English! Chung-Martin was never verified, but it just made sense.

Lawrence, on the other hand, is everything else. She’s curvy. She’s crass. She trips (twice), just like you. It’s hard to imagine Paltrow (or Chung) wiping out like that, and it’s unfathomable that it would happen more than once. Lawrence spent a prolonged stay in the spotlight, thanks to David O. Russell and The Hunger Games, attempting to become the world’s most accessible movie star. She takes command of all her interviews by sharing anecdotes that prove how regular she is. This shtick has been refined to a point verging on self-caricature, and therein lies the problem. J-Law has gone too far with her routine. (“Goop” is also probably a character for Paltrow, but it was a persona that seemed real, if unlikable. We believe the Goop from the newsletter is the Goop that Paltrow lives every day.)

Lawrence needs to retreat from caricature territory and make a few enemies. She can’t be everyone’s best friend. Maybe a relationship with Martin will force her to fuse a more authentic, more mature character, if only because she won’t be able to avoid discussing her relationship as much. For all the photos of Lawrence with Hoult, snaps of her with Martin will be more valuable and more intriguing.

Counterpoint: This Is Terrible for Jennifer Lawrence!

The entire Jennifer Lawrence experience as we know it is based heavily on our love for her public face and the near absence of any details of the private. Martin is threatening to upset her stasis. We reached peak public J-Law in March when Homeland Season 3 was spoiled for her on the red carpet. She freaked out, and her shock compelled her to hug the wall in a way that is not typically accepted in most social situations. And yet, because she is a gorgeous, striking actor who had spent well more than a year endearing herself to the press and the public, it became another moment in the Jennifer Lawrence Is a Regular Gal Hall of Fame. Her entire public persona is built on the assumption that we will adore someone who can be both pretty and gassy. She’s the inversion of the Ugly American stereotype: Beautiful Americans can be crude, too, but also wacky and fun and cute.

After watching her play opposite Bradley Cooper twice and Christian Bale once, and after witnessing her magisterial handling of her image, it’s not surprising she ended up dating someone 13 years older — her onscreen charisma always belied her 23 years. The surprising part is that her older boyfriend turned out to be Martin, someone seemingly at odds with the image she has crafted. Martin’s persona is the antithesis of J-Law’s. He’s from the Jay Z school of “speak little, project cool,” which has been incredibly effective for him. With little evidence to the contrary, it’s easy to assume he’s dedicated to his craft the way all rock stars should be. Most of the tabloid fodder about him was about his relationship, and while Paltrow was derided for her tone-deaf emails, his professional reputation has hardly suffered — unless you consider Coldplay a shitty band. He is defined by a staid coolness, which stands to threaten Lawrence’s precocity.

It was much easier to consider her your own friend when she was dating someone her own age, someone who had also grown up in entertainment. Upholding the supposed authenticity of the public character will be more difficult with Martin in tow. For starters, avoiding Martin questions will be more difficult than avoiding the Hoult ones. Her answers will have to negotiate how her unrefined self matches with the former Mr. Gwyneth, and we may be at risk of learning how much of the J-Law we know has been a cover. It’s fitting that Hunger Games: Mockingjay, Part 1 is coming out soon. If she’s exposed, may the odds be ever in her favor.

Smoke But No Fire: Is It Time to Break Up With 'The Leftovers'?