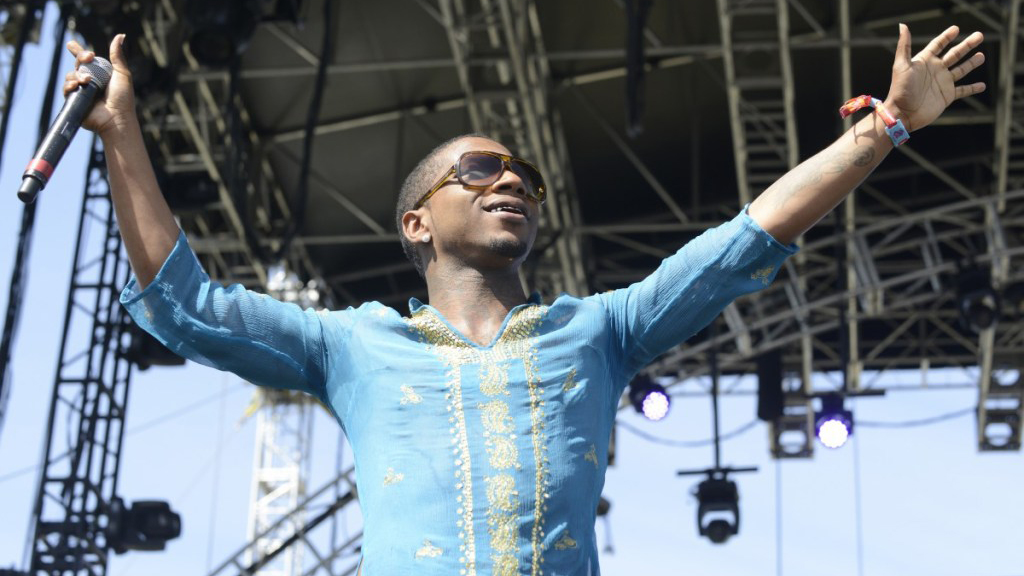 The end of the 2014-15 NBA season is nigh. While the debates continue about where LeBron James’s remarkable Finals performance ranks among the best and whether Stephen Curry has had a signature moment yet, there’s one guy who has already left an indelible mark on these playoffs. That man is Lil B, the Based God — rapper, motivational speaker, college lecturer, and former D-League aspirant. While one can’t squarely give him credit for the Rockets’ loss in the Western Conference finals, we also can’t rule it out. He put a hex on James Harden in the middle of the Rockets’ series against the Golden State Warriors because Harden failed to credit B as the originator of the cooking dance. After all, the Harden stir is mysteriously similar to the Lil B cooking dance. He also famously put a curse on Kevin Durant, which may or may not have doomed the 2014 Oklahoma City Thunder and Durant’s foot.

While we search for quantitative evidence to determine the extent of Lil B’s witchcraft, we sat down with him to talk about the status of his relationships with Harden and Durant, his future plans to play basketball, brief encounters with Gary Payton and Memphis Grizzlies owner Robert Pera, and the value of intellectual property. Spoiler alert: Just be real.

How closely have you been following the NBA Finals?

Every game. I was at every Oakland game. I didn’t go last night [to Game 5] because I was out here [in Los Angeles] coming to see y’all. I’m definitely going to just give my big support to the Warriors mentally.

I’m really loving Klay Thompson. I love Steph Curry, too, and seeing him play live is unreal. He’s a huge amount of talent, man. It’s ballhandling, too. A lot of good ballhandling.

Do you have any thoughts on Marreese Speights? Didn’t he come at you a few years ago?

After this series I’ll definitely have a stronger opinion about Marreese. I’ve been definitely more relaxed as a big Warriors fan, so I’m trying to keep it cordial. Marreese Speights did miss that critical dunk that some people say was the reason we lost the game … wide-open dunk. It’s really weird that everybody that says something about Lil B — they end up doing something extremely weird or there’s something a little bit weird about them.

So the missed dunk is related to the Based God?

It could be. But once again, everything dealing with the Warriors is after the Finals. But yeah, Marreese, if you’re saying Lil B is wack and you’re missing wide-open dunks, you know …

What’s happening between you and James Harden right now? Any interaction with him?

The last time I heard from Harden, TMZ interviewed him and they asked him if he knows about Lil B and the Lil B curse. He said, “I don’t know who Lil B is.” There was some people that did some research and found some tweets from James Harden, while he was actually listening to the song that Lil Wayne featured me on his mixtape, Sorry 4 the Wait. He was actually talking about Lil B on the tweets, you know, things of that nature.

With the James Harden situation, the curse was lifted off him because the Based God gave me, as Lil B, information. But for me, as Lil B, I think [the curse] was a little too much for James Harden. You can see now how he’s been handling things and how he’s been acting, there might be some deeper things going on with James Harden that we don’t know. He has a lot on his back as the [Rockets] team leader … He should be more free and honest.

Did you see the photo of James Harden in bed with Instagram model/aspiring rapper Farrah Flossit?

Yeah, it’s just the curse. The Based God’s curse was really active with him. It was just enough. He was warned. It’s all about just being real. What I mean by being real is just when you are doing dance celebrations, sports celebrations, like the cooking dance or anything like that. When you’re an artist, you want to always try your best to do the homework and see where it originated from. It kind of showed a bit of a flaw in James Harden, especially that he would lie and say he doesn’t know who Lil B is. That’s really scary and this is a person of influence and a public figure. You wanna make sure he’s being completely honest and not trying to answer things like a lawyer, you know what I mean?

How do you communicate with the Based God?

You know, I definitely get just insight. I tap into something that’s greater than me, Lil B, and I feel the truth. I get more of a comfort and a reassurance to say these things when I am honest about stuff. For a while, I was holding in. Really like all season, I was holding in the James Harden [curse] when I would see him doing the celebration. A lot of people were getting it misconstrued and calling it the “Harden stir” and a lot of crazy stuff. The Lil B cooking dance celebration is on all these video games, whether it’s basketball, baseball, or even hockey. With me being independent for right now and doing everything myself, it’s hard sometimes. You have to make sure you protect yourself and you protect what you created, like these ideas. And when things go worldwide — it might not have even been James Harden’s fault. He might have just honestly been doing it. When things get so big, people don’t always know where it originated from. This was more letting people know and always reminding people that artists need to be credited, just for their ideas. If you write something and somebody syndicates it, and then they’re like, “This is mine,” be real. So it’s always all about just getting that truth out there.

Have you had other issues with people attempting to steal your intellectual property?

Yeah, definitely. Lil B is like one of the most copied — it’s ridiculous. Whether it’s from clothing, from the lifestyle, to the epitome — I think that’s the right word — but it’s everything. What I do like is that people actually have been, especially in hip-hop, what they’ve taken from Lil B is the positivity. I ain’t mad about that. It’s a lot of positive aspects that I was really pushing out there. Just positivity in general. I’m feeling like hip-hop is the most accepted and positive as it’s ever been. People being looked at really crazy if you’re not on a positive vibe right now. You’re kind of like an outsider, even though it’s still different genres in hip-hop. Before Lil B, hip-hop and music in general was in a different space. Lil B really just pushed this independence. Just headstrong, you know what I mean?

What’s the status of the curse on Kevin Durant?

The Kevin Durant curse is still going on. It’s still active. For the only reason that Kevin Durant actually agreed to play a game of one-on-one with me. We’re talking on Twitter during the season, and people were like, “Let him focus on this season.” I remember he told me he was out in Oakland. It’s funny because it was when I was not as good as I am at basketball right now. I’ve been really practicing even more than I’ve been rapping recently. I’m actually at this gym [in the Bay Area] and the owner of the Grizzlies [Robert Pera] works out there, too, so I’ve been seeing him. I’m going to talk to him soon.

I’ve been playing with some college guys. I’ve been playing with my other guy, Lamar, who has really been teaching me the fundamentals — just the fouling and stuff like that to make sure I’m not grabbing people. I’m just working on my shot right now. I’m really proud of how far I have come, because even when I tried out for the Warriors D-League team, I was definitely not anywhere as good as I am now or comfortable or relaxed and calm on the court. I have a lot more ball control and just looking at things, I’m moving around. Especially when we’re five-on-five, I’m really trying to move the defense around, clear out things. I consider myself a 2. Right now, I don’t consider myself a point guard, but more of a shooting guard, a defensive shooting guard. I love to get to the rack. I’ve got a quick first step and, yeah, my defense is pretty crazy.

Have you and Kevin Durant spoken recently?

Kevin Durant is definitely doing the James Harden thing where he’s just trying to act like it’s nothing. It’s all good. I’m definitely looking forward to seeing Kevin Durant at one of these basketball camps or one of these leagues where I’m playing at. I’d really love to play him and to see how much an NBA-caliber player cares about the game. You know, because he was trying to rap. With me being a rap artist, I’ll rap if it come down to it. I’m not really scared about it.

Do you want to rap-battle him?

I don’t think he wants that. Just making a comparison. If you really love the game like I love the game of rapping, then it should be nothing to him to play one-on-one and show why he feels like he’s one of the greats.

Are you planning on playing in summer league or doing any camps?

Yeah, I’ve been training this whole year, so I’m definitely really open to doing some summer leagues and some camps and play really competitively and show my skills to the world.

Are you going to try out for the D-League again?

Well, now that I have even more direct connections with these teams, I might just go straight to them.

What NBA teams do you have connections with outside of the Warriors?

Shout-out to the Portland Trail Blazers. Me and Dame [Lillard] are supposed to get some rap collaboration going. I got my “hoop life” mixtape series that I’m going to be working on — Volume 2. Volume 1 came out and it was pretty crazy. They actually played the Kevin Durant dis on Jimmy Kimmel a couple of days ago and T.I. was on there, so it was pretty crazy.

The Milwaukee Bucks reached out. They’re just like, “Come through and we’ll talk.” They support what I’m doing and it’s really just establishing that connection and seeing what can happen.

Jason Kidd seems like he’d be a tough coach.

I believe it. He’s from the Bay. He played at Cal, so yeah, Jason Kidd is an extremely hard worker. I actually just seen Gary Payton at the game.

What did Gary Payton have to say when you saw him?

Well, I really wanted to ask him about defensive stance. That’s what I really wanted to talk to him about. But yeah, he was really just showing love. He definitely supports Lil B. Shout-out to Floyd Mayweather, too, because he just followed me on Twitter. It was his 600th follower, so it was cool.

Do you write and send all of your own tweets?

Definitely. I followed the 1.2 million people with my hand. Never faked anything. Never bought any followers or anything like that. So anything on my social media is a hundred percent real.

NBA Shootaround: We Made It