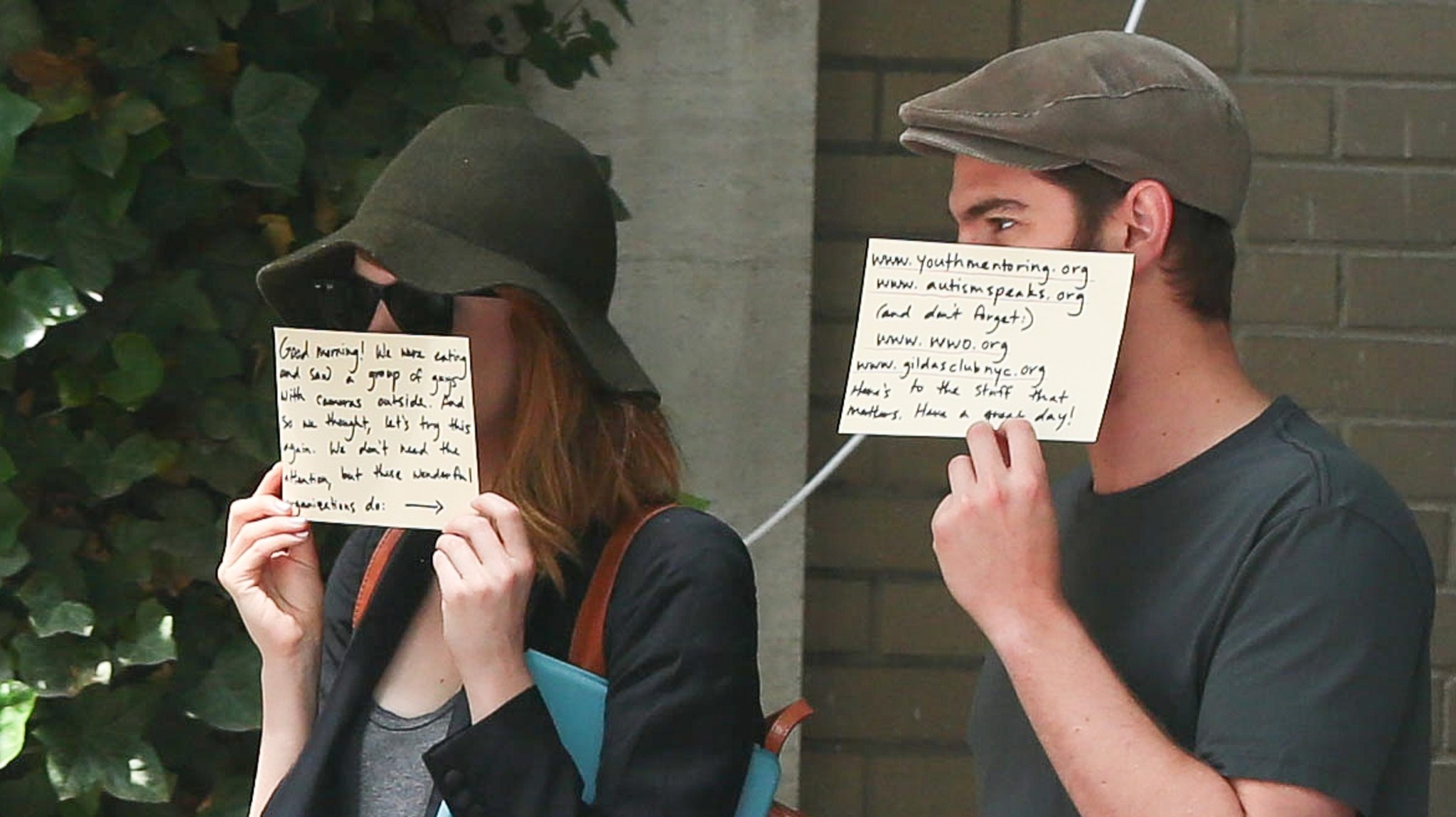 Breakup of the Week: Emma Stone and Andrew Garfield

Despite the very cute signs they used to hold up in paparazzi photos, Emma Stone and Andrew Garfield are on a break, a concept all too familiar to everyone ages 15 to 40. A report in People cites conflicting work schedules — him in Taiwan for a Scorsese film, her in the U.S. for various projects. These two are like a real-life sitcom couple. I’m rooting for them to work it out, but I don’t quite know why.

Here are the facts: Chris Copeland and his girlfriend, Katrine Saltara, were stabbed outside of 1Oak in New York during the early hours of Wednesday, April 8. He was in town because the Pacers were playing the Knicks that night. He suffered a punctured diaphragm, and he had surgery for that and elbow injuries. Initial reports suggested that there was a fight that escalated, but this Indy Star story disputes that, saying Copeland did nothing to initiate or provoke the attack. Police found a switchblade at the scene. A friend of the couple was also slashed.

More facts: Thabo Sefolosha and Pero Antic of the Atlanta Hawks were also at the scene, though the New York Daily News reports that they were at the club independently. Even though they had played a game against the Phoenix Suns Tuesday night in Atlanta, they were at the club by the time the police arrived around 3:58 a.m. Sefolosha and Antic were arrested on charges of interfering at the crime scene. Again, from the News, “Four officers were needed to handcuff 6-foot-7, Thabo Sefolosha after he ignored repeated orders to leave the crime scene, authorities said … His 6-foot-11 teammate Pero Antic allegedly grabbed one of the cops trying to arrest Sefolosha.” Their attorney contends that they are innocent. Sefolosha was seen limping yesterday with a “heavily bandaged” right ankle.

So that’s where the great nightclub fracas of 2015 stands right now. While Copeland remains in the ICU, he will likely make a full recovery. Without the emergence of new information, I’ve got questions. A lot of questions.

Litigious Situation of the Week: Mischa Barton Sues Her Mom

The O.C. was a perfect network soap opera for a fleeting moment. But perfection and fame are hard to sustain, which Mischa Barton may know better than anyone. After appearing in magazines like People and Us alongside her O.C. castmates and various pseudo-famous boyfriends, she quickly dropped out of the tabloid scene after Marissa Cooper was axed from the show. Most of her appearances in the gossip mill are courtesy of the Daily Mail, though this week she’s going mainstream — relatively. Barton is suing her mom!

According to this Hollywood Reporter account, she alleges that her mother posed “as a talent manager who, instead of acting in the best interest of her daughter/client, schemed to defraud her unsuspecting victim.” It sounds like an O.C. plot arc. Barton accuses her mother of giving her an allowance on a sporadic basis, lying about Mischa’s fees as a way to pocket money (isn’t that embezzlement?), entering endorsement deals without Mischa’s consent or knowledge, and convincing her to buy a home that went into foreclosure last year.

I wonder if her mother is truly responsible for all of those ill-advised decisions over the last 10 years. People helpfully reminds us that at the peak of her fame, she was dating oil heir Brandon Davis, who offered “intense conflicting opinions” to those of her mom during their relationship. Mischa Barton and Marissa Cooper have been dogged by drama from the jump.

Engagement of the Week: Jennie Garth and Some Guy

Jennie Garth, once seen on the short-lived Jeff Probst show talking about her dating struggles, is now engaged. Congratulations, Jennie! News of Garth and David Abrams’s relationship appeared in January, with Us declaring that he had already met her parents and they had vacationed in Cabo together. People generously refers to him as an actor, but his IMDb page has just a few credits and the best that E! could do was mention his 2 Broke Girls one-episode appearance in which he played “Cool Guy.” Given that her marriage to fellow turn-of-the-21st-century star Peter Facinelli didn’t work out, a lower-profile actor seems like a savvy move.

Professional Breakup of the Week: Mariah Carey and Her Publicist

Mariah Carey makes it difficult to defend her. As the singer of several phenomenal songs, including contenders for best Christmas song ever and greatest pop ballad ever, a vocalist who once had an eight-octave range, and the mother of truly adorable children (somewhat idiot names aside), this woman should be celebrated by us all. After all, who doesn’t feel better after listening to the entire #1’s album? Then, her high-profile publicist of 15 years drops her on the eve of her Las Vegas residency. You can’t help but think, Wow, she must be a nightmare to deal with. She’s probably finding emotional support from “long-time friend” Brett Ratner, with whom she’s now making a movie. They’re developing something based on her past hits. Mariah’s music is unimpeachable. Even the breathy, more recent tunes are acceptable. The movie need not have a plot to be entertaining.

She’s going to be just fine. I hope.