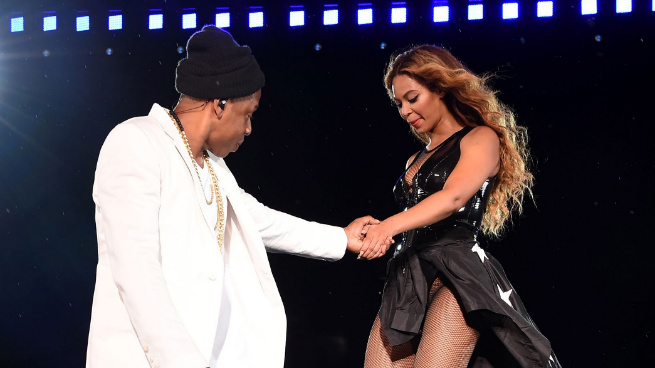 Beyoncé and Jay Z Divorce Roundup of the Week: Lawyers, a Song for Beyoncé

Another whirlwind week for Beyoncé and Jay Z divorce rumors! Page Six continues its campaign for a Pulitzer with a report about how the couple’s business partners are getting involved. HBO (which is planning to air a concert special), Live Nation (concert promoter), and a few lawyers had an emergency meeting. Page Six says the tour may not make it to the September finale in Paris. Jay and Bey considered putting out a statement, but they couldn’t agree on what it should say. I guess they decided to let the “Flawless” remix do the talking, for now. I wonder if Beyoncé released her track knowing that a song from Olivia “Yes Liv Can” McFaller would also drop this week. Liv’s cover of OutKast’s “Ms. Jackson” is an obvious attention-grab, “apologizing” to Beyoncé for the time Jay hit on her. It’s not even well done, and, in any other moment, probably wouldn’t be on anyone’s radar. It may be outrageous to consider that Beyoncé would respond to, or proactively bury a terrible tune by, someone so much less famous, but this is a crucial narrative moment for her. She needs to hold tight, control the message, and distract us.

Secret Wedding of the Week: Pete Campbell and Rory Gilmore

Vincent Kartheiser and Alexis Bledel have emotionally recovered from Beth’s electroshock treatment and are now married. They had a secret wedding in Ojai, California, back in June, and Jon Hamm and Matthew Weiner were both there. Way more important, though: Who from Girlmore Girls was there? If Lauren Graham didn’t attend, something is not right. And, is a wedding even official if Kirk isn’t there? Potential Celebuspawn of the Week: Is Jennifer Garner Pregnant?

Star magazine insists Jennifer Garner is carrying another baby Batfleck. Jennifer Garner’s publicist says she is NOT carrying another baby Batfleck. To be fair to Star, there are a lot of recent photos that suggest that she may be with child. But maybe it was just windy that day, and her sweater took an odd shape as a result. Garner, Affleck, and their kids are photographed so frequently that if there is another baby on the way, it’ll soon be impossible for them to deny. In any case, it’s refreshing to see there’s enough space to propagate rumors about Ben Affleck and Jennifer Garner in the same news cycle. Women have come so far!

Speaking of moms, Kirsten Dunst would like to be one! Maybe. In an interview with British magazine Red, she talks about how many of her friends are pregnant and thus she is in “baby mode” by proxy. But at no point does she explicitly say her proximity to pregnancy actually makes her want to be pregnant. Here’s the quote: “But I get asked that question a lot because I’m in my thirties and it’s like: time to get married and have babies, right? That’s the vibe. Well, I already have a mother to ask those questions, so nobody else needs to!” The real story here is that Kirsten Dunst may have a pushy mom. I’d like to know more about that. In her mom’s defense, Dunst’s career has slowed down recently and maybe her mom misinterpreted that. A cursory scan of her IMDb shows just one movie that no one has ever heard of from 2014 and only one other project for 2015. She needs to produce … something.

Celebrity Real Estate News of the Week: Steven Soderbergh and Mischa Barton (Not Together)

Steven Soderbergh is on the move. He currently has two properties on the market in New York. One is in Chelsea at 147 West 22nd Street, and it appears this one has a parking garage beneath the building, which is surely convenient for Soderbergh. Even if he doesn’t drive himself, he probably has a car, because he’s rich. The second apartment is in Tribeca at 155 Franklin Street. If you recognize this exterior, it’s because Taylor Swift lives here and has been photographed outside of it in a overly stylized outfit seemingly every day since moving in. Orlando Bloom also owns a unit in the building, but, as we know, he has been in Ibiza recently. Though the presence of Taylor Swift combined with the constant paparazzi would be an understandable reason to move, it seems like Soderbergh just lost interest. He gutted the place, but never went through with the renovation. Now he plans to move to a larger Tribeca loft, presumably using all that Behind the Candelabra money.

Meanwhile, on the other coast, Mischa Barton is also engaged in some real estate transactions — or a lack thereof. She hasn’t paid the mortgage on her $7 million Beverly Hills home in five months, and she’s $100,000 behind. According to TMZ, she bought it for $6.4 million in 2005 at the height of her O.C. fame, and she tried to sell it for $8.695 million back in 2010. She hasn’t had any luck, though. If it’s any solace, her dad is “not worried.” Maybe that’s because he’s actually living there and has decided to neither help nor be concerned.

Mischa is hustling in London, getting involved with the e-cigarette business. Quoth the Mirror, “Mischa Barton is the lead judge of VAPESTICK Style Icon — a nationwide campaign to find the county’s most stylish e-cig vaper launched by leading e-cigarette brand VAPESTICK®.” This new work opportunity gave her the platform to denounce The O.C. She claims she would not accept the role of Marissa Cooper if the opportunity came around again, saying “it was certainly not the kind of thing I was expecting it to be.” Of course it wasn’t. How could she have anticipated the massive success of Season 1? She’s probably just still salty about Marissa’s brutal death at the hands of Volchok.

Celebrity Breakup of the Week: Michael Strahan and Nicole Murphy

On the eve of his Pro Football Hall of Fame induction, Michael Strahan and fiancée Nicole Murphy (Eddie’s ex!) announced their breakup. TMZ is reporting that after months of investigating, Murphy finally confirmed that Strahan had been cheating on her. Blind Gossip implies he had a lot of mistresses, and they’ve already confirmed (whatever that means here, in a gossip roundup full of rumors) three of them. But wait, maybe they were both cheating to some extent. In early July, Murphy was spotted in Puerto Rico with former NBA player Jim Jackson. Apparently Strahan knew she was on a trip, but believed it was just with some gal pals, while she thought they were on a break. Commence all the Friends jokes now.

James Van Der Beek Joins 'CSI: Cyber,' Which Is Really What They're Calling This Show