Why Is Everyone and Their Mom (a.k.a. Kris Jenner) in Ibiza This Summer? Four Airtight Theories 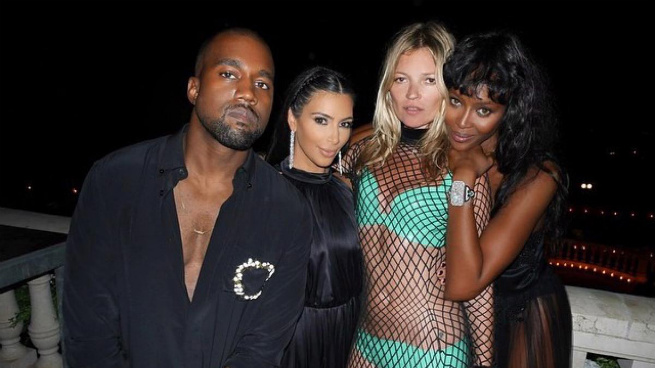 When Justin Bieber and Orlando Bloom got in a fistfight last week in Ibiza, it came to our attention that everyone on a certain rung of the celebrity universe is currently on the island off the coast of Spain. Leonardo DiCaprio had been at the same party as Bloom and Bieber, and supposedly danced to Pharrell’s “Happy” with Bloom to help him blow off steam after the fisticuffs. Bieber is vacationing with his friend Khalil and “not girlfriend” Shanina Shaik. Bloom was there with Erica Packer, the ex-wife of billionaire James Packer, the rumored beau of Bloom’s ex-wife, Miranda Kerr (whom Bieb supposedly laid the Biebersnake to, prompting the fight). It’s all very Shania Twain.

Then Zac Efron and Michelle Rodriguez showed up together, because they are dating. Then a gang of wild Kardashians appeared — Kim, Kendall, and Kris. And Kim brought Kanye, of kourse. With so many K-named people there, it wasn’t surprising that perennial Ibiza fixture Kate Moss showed up, too, wearing a mesh dress over a latex bikini. DiCaprio brought his model girlfriend Toni Garrn. Puff Daddy came and brought Cassie. Also in Ibiza? Ciara, Paris Hilton, Jessica Chastain, wealthy children Peter Brant Jr. and Harry, and soccer players Neymar and Bastian Schweinsteiger. Kim Kardashian and Paris Hilton even interacted for the first time in forever, or at least for the first time in recent memory since Kim’s “rich girl with a sex tape” brand bested Paris’s. Paris is still popular overseas, and now that Kim is all about Europe (because Kanye is), it makes sense to combine forces again. They both love a cute trashy leopard print on an overpriced fancy dress!

Why are so many celebrities in Ibiza right now, as opposed to, say, Majorca, Lake Como, the Hamptons, Mykonos, or on the set of a Marvel movie? This is the most thorough investigation we could possibly do, barring a “We Went There” report live from Paris Hilton’s foam party.

Ibiza Theory No. 1: It’s a Historic Party Island for Celebrities and Everyone Else

Ibiza was once dedicated to worship of the goddess Tanit. It was self-governed until 1715, when it came under Spanish rule. It became autonomous again in 1978, and for many years was considered an off-the-beaten-path retreat, attracting refugees, draft dodgers, and artists, and eventually drawing movie stars, rock stars, and hippies. Pink Floyd recorded the soundtrack to More on the island in 1969, adding to its mythos.

In Last Night a DJ Saved My Life, Bill Brewster and Frank Broughton describe how Ibiza went from a sleepy Spanish island to the center of summer for Europeans on holiday: “[T]he reasons for Ibiza’s appeal may be as prosaic as lovely beaches and guaranteed sunshine. Add drugs and horny young people to the equation and it’s a no-brainer.” In the late ’60s, Ibiza was developed into a proper tourist destination with a reputation for welcoming those with alternative lifestyles; “news spread fast among the gay community that it was a place where men could hold hands without fear of assault.” In 1973, seminal Spanish superclub Pacha opened a branch on the island, kicking off the era of Ibiza as an ultimate clubbing destination. In the ’80s, the island developed its core clientele of jet-setters, models, cultural icons, and rich people on vacation, while maintaining its original reputation as a gay-friendly mecca. Early Ibiza DJs played pop, reggae, and folk, before dance music became the drug of choice. Other drugs of choice in Ibiza? Mescaline, acid, weed, and, starting in the early ’80s, ecstasy.

The modern Ibiza musical tradition is a fusion of its psychedelic roots and electronic present. DJ Alfredo Fiorito invented a new musical style that fused American house and European pop, named “Balearic beats” by the British press after the islands that spawned it. Fiorito’s sets at Ibiza’s club Amnesia became legendary, and they eventually helped inspire another new important genre: acid house. By the late ’80s, the secret was very much out. Ibiza was overrun with tourists every summer who were eager to experience the legendary party paradise in the flesh. Ibiza started to get so crowded and the scene so overly commercialized that it was no longer considered a trendsetter’s Eden. Today Ibiza is known for trance, house, and techno, mostly for bringing in big-name DJs, with a healthy dose of celebutantes like Paris Hilton doing iPod sets.

OK, as much as I wish Bieber were there to get into the Balearic (Bieblearic) sound, the real answer is so much more boring. He was there for Riccardo Tisci’s 40th birthday party, and so was basically everyone else. Tisci is the Givenchy artistic director who put Kim Kardashian in the famous “flowered couch” dress when she was pregnant at Vogue’s Met Ball. Tisci’s party took place at the Los Olivios horse stud farm, which had been dressed with candles, white roses, and 40 huge white balloons. Naomi Campbell led the crowd in “Happy Birthday.” Kanye faked everyone out by projecting a video of himself apologizing for not being able to be there and then appearing like magic on a balcony to perform. A few people actually did turn down Tisci’s invite (for what?) — Anna Wintour, Florence Welch, Julia Roberts, and Anne Hathaway sent their best with a video card.

The dress code was “Black Subversive Glamour,” and Tisci received a solid-gold pair of Beats by Dre (which sponsored the event). The party went until 6 a.m. and created a thousand Instagrams, including this cool one of Kris Jenner and Justin Bieber that Bieber posted with a very special message for Kendall and Kylie.

Ibiza Theory No. 3: The Ibiza Tourism Board Is Involved

Not everyone who is in Ibiza was at the Riccardo Tisci party. So is it possible the invisible hand of the Ibiza tourism board was involved in getting so many random famous people to show up there at once? It wouldn’t be the first time a tourism board paid celebrities to do something and then pretended it just happened of its own accord. Remember when the South Australian Tourism Board got in trouble for paying Australian reality-show celebrities and TV presenters to tweet about Kangaroo Island? I sure do. It’s a rule that celebrities must be on yachts all summer, but why not go somewhere else? Why Ibiza?

But there can only be one right answer, and what if it’s …

Ibiza Theory No. 4: The Island of Doctor Moreau

THE CELEBRITIES ARE BEING TAKEN TO IBIZA TO BE CROSSBRED WITH OTHER CELEBRITIES TO CREATE HYBRIDIZED SUPER-CELEBRITIES WHO WILL TAKE OVER THE GLOBE! ORLANDO BLOOM, JUSTIN BIEBER, MIRANDA KERR, AND SELENA GOMEZ ARE BEING SEWN TOGETHER INTO ONE ETERNALLY SCRAPPING FOURSOME, A HUMAN BIEBERPILLAR. GET OFF IBIZA BEFORE IT’S TOO LATE!!!!!

Hollywood Prospectus Podcast: 'Guardians of the Galaxy,' 'The Knick,' and Spoon's New Album