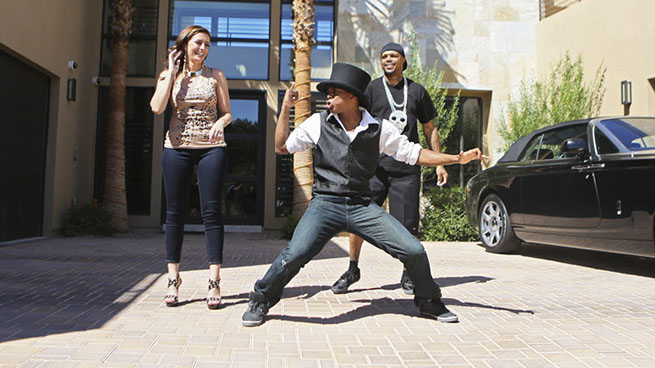 Who Is This Now? Nautica.

Why Are We Watching Him? Tiffany Burress is showing him around a college campus to try to get him excited about higher education and his future.

How Did He Get Here? His father, Three 6 Mafia member DJ Paul, has temporarily switched partners with Plaxico Burress for this social experiment.

What’s the Grossest Thing We See? Nautica thinks it’s OK to walk around in public wearing a gigantic top hat with steampunk goggles on the brim.

What Have We Learned? DJ Paul may be an Oscar-winning artist, but he is clearly a hideous failure as a parent.

Why Are We Watching Her? She and her new husband, Doug, are trying to decide where they’re going to live now that they’re married, and as part of the decision-making process, she’s visiting his parents’ house, because that’s where he lives right now.

How Did She Get Here? I know what you’re thinking: Don’t most couples figure this out before they get married? Sure they do. But most couples have met before the second they encounter each other at the altar. Jamie and Doug did not.

What’s the Grossest Thing We See? Strike one for Jamie with Doug’s mom came when Mrs. Hehner saw her at the wedding and recognized her as one of the female prospects on Ben Flajnik’s season of The Bachelor. Strike two came immediately after that, basically, when Jamie got an eyeful of Doug and started crying uncontrollably. So when Jamie’s chilling in the Hehner living room and “jokes,” “At the wedding, you know, I was like, I thought he was, like, a monster.” When everyone laughs uncomfortably — partly since they already knew that based on her reaction to seeing his face — Jamie backpedals, “And like — not really, but like, he could have been anyone and I would have thought that.” Mmmmmm, ANYONE? I doubt it.

What Have We Learned? Jamie is building a great case for Doug’s mom to murder her and totally get away with it.

Why Are We Watching Him? He’s showing us how he’s preparing for the apocalypse by breeding rabbits for “food, fuel, and fertilizer.”

How Did He Get Here? It seems he screwed up (by his own account) a few times in his job as a copier repairperson and was then asked to train a new employee. When that person was fully up to speed, Nick was told the new person was his replacement and that Nick was fired. Apparently the lesson Nick took from this experience was not that he should be better at his job, but that he should start preparing for the total collapse of the U.S. economy. Sure, why not.

What’s the Grossest Thing We See? Nick has built his own flamethrower with PVC pipe — again, why not — and uses rabbit droppings as fuel. In order to get said droppings ready for use in his flamethrower, he grinds them up into a fine powder using a common household blender. Now, Nick probably bought a different blender to use for this specific purpose and not for any food prep. But we do see him use it on the countertop in his kitchen, so can we really be entirely sure?

What Have We Learned? If Nick invites you over and offers you a daiquiri or margarita, politely decline.

Why Is Everyone and Their Mom (a.k.a. Kris Jenner) in Ibiza This Summer? Four Airtight Theories